Anthelmintics, or antihelminthics, are drugs that kill or expel parasites. They are used to treat various diseases caused by parasites, such as helminths.

Helminths are categorized as follows:

Helminths have a complex life cycle involving various host species and vectors in different stages of their life cycles. In most parasitic infections, a human acts as а host of the parasites.

There are several major causes of helminthiasis: 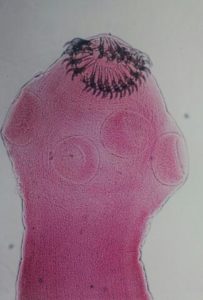 The intermediate hosts of the tapeworms (T. saginata and T. solium) are cattle and pigs.

Taenia solium (pork tapeworm) is most commonly found in Asia and Latin America. In the US, it occurs in immigrants from these countries. It causes neurocysticercosis. The main route of transmission to humans is through eating undercooked pork products.  The tapeworm’s eggs are ingested by oral-fecal contamination.

Taenia saginata, also called beef tapeworm, does not cause neurocysticercosis. Usually, humans get infected with T. saginata after eating undercooked beef. It causes taeniasis in the intestine, and it is harmless. It mostly remains asymptomatic. 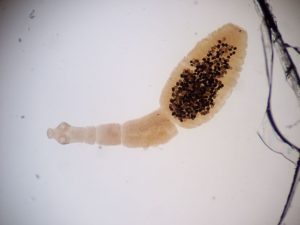 The intermediate hosts for this infection are sheep, and the primary hosts are dogs. Under certain conditions, humans can function as an intermediate host. The larvae may develop into hydatid cysts within the tissues, usually in the liver (two-thirds of the patients).

Flukes of genus Schistosoma cause schistosomiasis. It is also called snail fever because different types of snails act as hosts of the genus Schistosoma. Infection can occur when a person’s skin comes into contact with contaminated water. Complications arise when the body produces immunological reactions towards the Schistosoma parasite’s trapped eggs in various tissues. Eggs reach the skin, brain, muscle, adrenal glands, and eyes. Eventually, the excessive inflammatory process causes organ damage. 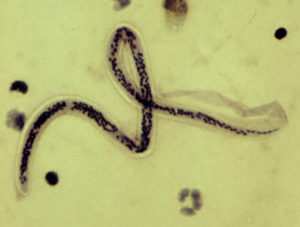 The adult filariae of these types of worms reside mainly in the lymphatic system, connective tissues, or the host’s mesentery. They produce live embryos, called microfilariae, which travel in the bloodstream through transmission from mosquitoes or similar insects when they feed.

After development within the secondary host, the larvae pass to the mouthparts of the insect and are re-injected into humans.

Common filarial diseases are onchocerciasis (the presence of microfilariae in the eye, causing ‘river blindness’), loiasis (the microfilariae cause inflammation in the skin and other tissues), trichinosis (the larvae from the viviparous female in the intestine migrate to the skeletal muscle, where they become encysted). 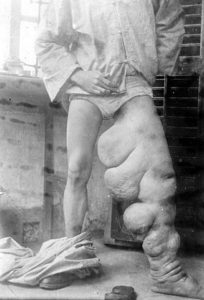 Image: “An infection in the leg by Wuchereria bancrofti.” by Unknown. License: CC BY-SA 3.0

Ascariasis is the most common intestinal nematode infection. It remains asymptomatic in most patients, but it can cause pulmonary complications (cough, wheezing) and intestinal obstruction in severe cases. It is usually prevalent in the areas of poor sanitation and hygiene.

The reason for the infection is larval penetration through the skin. After reaching the lung, the larvae migrate to the oral cavity and are swallowed. The hookworm attaches to the intestinal mucosa and feeds through the host.

The drug has a broad range of neurocysticercosis activity, echinococcosis, ascariasis, hookworm, and trichuriasis. The drug acts by inhibiting helminth β-tubulin polymerization, thus interfering with microtubule-dependent functions, such as glucose uptake, in the helminths.

Albendazole’s bioavailability is less than 5% when taken on an empty stomach. Patients should be advised to take the drug with fatty foods to enhance absorption. Side effects include abdominal pain, nausea, vomiting, and increased hepatic transaminases. These are generally transient and usually do not require discontinuation of the drug. LFT’s should be monitored during therapy with albendazole.

The drug is effective against a spectrum of intestinal and tissue nematode infections, including ascariasis, hookworm, enterobiasis, and trichuriasis. Mebendazole is the preferred drug for treating multiple infestations and is more efficacious than albendazole against trichuriasis.

The site of action of the drug is the microtubular protein β-tubulin of the parasite. It binds to β-tubulin of the worm with high affinity and inhibits its polymerization. It also blocks glucose uptake in the helminths.

Albendazole and mebendazole are effective against the following parasites: 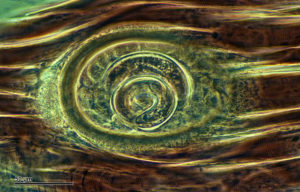 Thiabendazole is an older benzimidazole derivative, and, apart from the therapeutic response against various helminths, it provides symptomatic relief in cutaneous larva migrans cases. It also alleviates the skeletal muscle symptoms produced when Trichinella spiralis larvae migrate to muscles.

Its exact mechanism of action is unclear, but DEC may act by changing the parasite such that it becomes susceptible to the host’s normal immune responses (phagocytosis). It may also interfere with helminth arachidonate metabolism.

DEC is a drug of choice for loiasis and for filariasis caused by Wuchereria bancrofti and Brugia malayi. Nausea, loss of appetite, headache, weakness, and dizziness are common side effects.

Praziquantel is active against schistosomes, cestodes, and their larval forms, but not nematodes. It causes intracellular calcium to leak from the parasites’ cell membranes, producing contracture and paralysis. The paralyzed tapeworms are dislodged from the intestinal mucosa and are expelled from the intestine. Flukes and schistosomes are also cleared from tissues and veins.

Praziquantel is a drug of choice to treat the cysticercosis caused by T. solium. Side effects are more prominent in patients with a heavy parasite load because of decay products released from the dead worms.

Praziquantel is contraindicated for treating ocular cysticercosis, as the destruction of the organism can cause permanent eye damage. Praziquantel is considered safe for pregnant and lactating women (category B drug).

Piperazine is highly active against Ascaris and Enterobius infections, with cure rates of 90—100%. It causes hyperpolarization of worm muscles by opening chloride channels, thus causing relaxation and depressing responsiveness to ACh’s contractile action. Flaccid paralysis occurs, and the worms are expelled alive. Piperazine is safe and well-tolerated. The occasional side effects include nausea, vomiting, abdominal discomfort, and urticaria.

This drug is effective against the following helminths:

It is a depolarizing neuromuscular blocking agent that causes paralysis in the parasite. It also inhibits cholinesterase. It is poorly absorbed by the GI tract.

Important: It is most effective against intestinal parasites. Caution should be taken while treating the patient with liver dysfunctions.

It is active against T. saginata, Diphyllobothrium latum, and Hymenolepis nana, as well as threadworm. The drug inhibits oxidative phosphorylation in the mitochondria and interferes with the anaerobic generation of ATP in the tapeworm. Thus, organisms die from ATP deficiency. However, niclosamide does not kill the ova/larva. It should be used with caution in T. solium cases because of an increased risk of visceral cysticercosis.

It is minimally absorbed from the GI tract, and no systemic toxicity occurs. It is well tolerated; occasionally, patients may have minor abdominal symptoms. Malaise, pruritus, and lightheadedness are rare. Niclosamide is safe during pregnancy and in patients with poor health.

Levamisole is effective in common roundworm (A. lumbricoides). It has a nicotine-like action, stimulating and blocking the neuromuscular junctions. Consequently, it causes the paralysis of parasites, and they are expelled from the body through feces. Side effects are unusual but may include nausea, abdominal pain, giddiness, fatigue, drowsiness, or insomnia.

It is obtained from Streptomyces avermitilis. Ivermectin acts on the glutamate-gated chloride channels (GluCls) present in the protostome invertebrates. They control the parasites’ locomotion and feeding. Ivermectin causes the hyperpolarization of the GluCls, resulting in the paralysis and death of the parasite.

Important: Ivermectin is only effective during the larvae stage of various parasites. It does not kill the adult parasite. 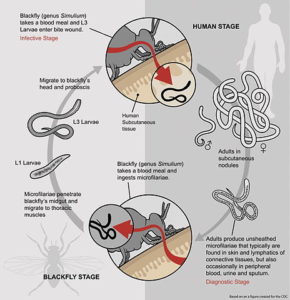 Ivermectin is active against the following parasites:

Onchocerciasis is caused by Onchocerca volvulus – the vector is a black fly (Simulium genus). Humans are the hosts of Onchocerca volvulus. The disease is also called river blindness. It is most common in West African savanna areas, and it usually causes blindness by the age of 40—50 years in the affected individuals.

Ivermectin (150 mcg/kg, OD oral route) kills 90% of the microfilaria within one week of treatment. However, the therapy needs to be continued for 10-12 years (throughout the parasite’s lifespan) to kill the parasite. It has a long half-life of 48-60 hours.

Adverse effects are usually caused by the deaths of the parasites. These include fever, headache, mild pruritus, giddiness, weakness, rash, nausea, abdominal pain, constipation, lethargy joint/muscle pain, hypotension, tachycardia, and edema. These reactions are usually mild and last for two days after treatment.

In some patients (1—3 %), the reaction could be severe due to high fever, hypotension, and bronchospasm. Corticosteroids are given in such cases to manage adverse effects. Ivermectin is contraindicated in pregnant and lactating women.

It is given with triclabendazole to treat the infections (fascioliasis) caused by sheep fluke (fasciola hepatica). The mechanism of action is unknown.

Drug of Choice for the Treatment of Helminthic Infections