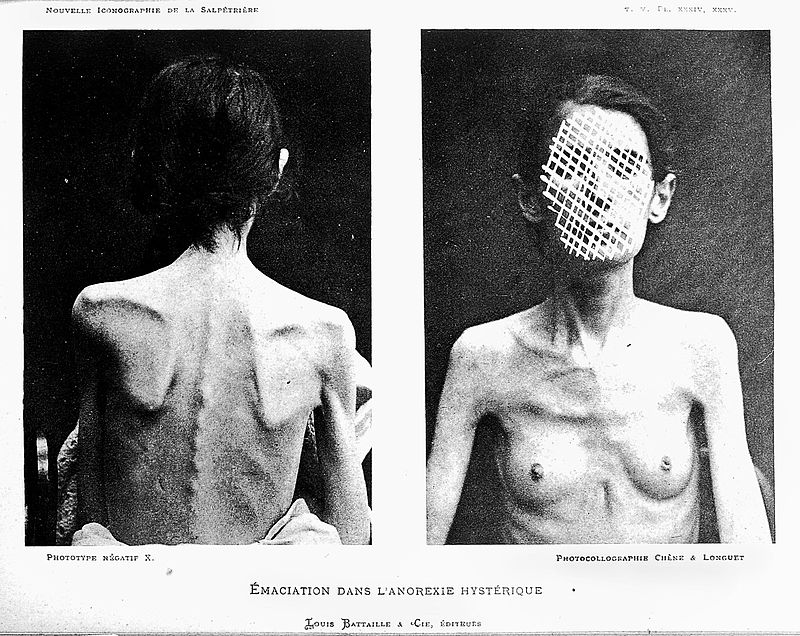 Eating disorder: A chronic psychiatric condition characterized by a persistent disturbance of eating behavior that has a significant negative impact on physical health and/or psychosocial functioning.

Anorexia nervosa: An eating disorder characterized by self-imposed starvation and inappropriate dietary habits due to a morbid fear of weight gain and disturbed perception of body shape and weight. These patients are often emaciated and their body weight often drops below 85% of ideal body weight with associated physiological and psychological complications.

Eating disorders have a higher prevalence in the younger population, mostly affecting girls and women, and occur more frequently among individuals in higher social classes and in developed countries.

Anorexia nervosa is common in young females aged 15–25 years and has a prevalence of about 1%. Ballet dancers, athletes, and models are frequently affected.

Bulimia nervosa has a prevalence of 2%–4% in the young adult population. Females aged 18 to 35 years are most commonly affected.

Binge eating disorder has a prevalence of 2%–5% in the general population. About half of patients with this disorder are overweight, and one-third of all cases are males.

The etiology of eating disorders cannot be traced back to a single event but rather consists of a complex interaction between biological, psychological, and social factors. Studies of twins show that genetic factors also play a role in their pathogenesis.

All eating disorders have in common a disturbed perception of body shape and weight. To avoid weight gain and to reduce weight, some individuals may use extreme measures such as fasting, physical exertion, and laxatives, which can cause serious medical complications.

Individuals with eating disorders often have a distorted body image and low self-esteem, and they also have a higher prevalence of other mental health disorders, such as obsessive-compulsive disorder, affective disorders, or impulse-control disorders.

Anorexia literally means “loss of appetite,” which, strictly speaking, does not apply to this disorder. Patients with anorexia nervosa experience hunger sensations but deny and try to suppress them due to fear of gaining weight.

The Diagnostic and Statistical Manual of Mental Disorders, Fifth Edition (DSM-5) defines the following criteria for the diagnosis of anorexia nervosa:

Anorexia nervosa is classified into the following two types depending upon the dietary behavior:

The characteristic symptoms of anorexia nervosa are the excessive fear of weight gain along with a body image disturbance. These patients consider themselves too fat despite being underweight and often find their own body displeasing. These symptoms hamper their daily activities, and they are preoccupied with weight issues. Additionally, these patients lack disease awareness; therefore, compliance is minimal or absent, especially at the beginning of treatment.

On systemic review, the patients may also have the following symptoms:

On physical examination, the patients are markedly underweight and have a body mass index (BMI) of less than 17.5 kg/m2.  Other signs that may be present include the following: 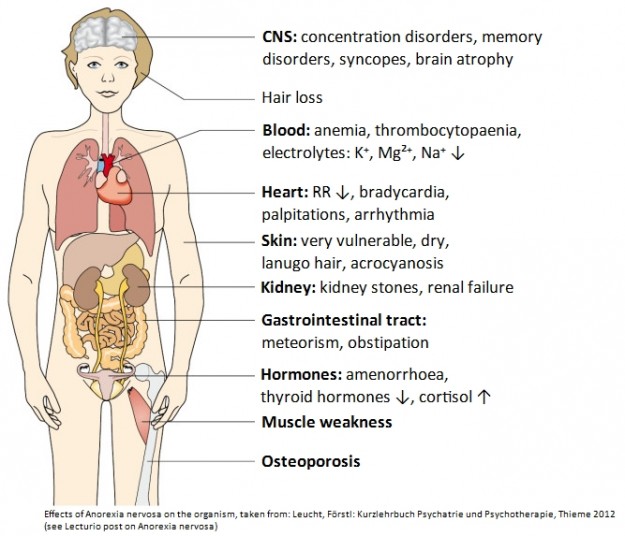 The treatment of anorexia nervosa consists of a combination of psychotherapy and pharmacotherapy.

Anorexia nervosa has widespread effects on all of the body systems and can be life-threatening. In most cases, hospitalization is advisable to remove patients from the environment that promotes the disorder. During the hospital stay, the goal of therapy is for the patient to gain approximately 0.5–1 kg of weight per week. Initially, force-feeding with parenteral electrolyte solutions and a nasogastric tube may be necessary. The electrolytes are regularly checked as refeeding syndrome may occur.

The refeeding syndrome is a constellation of metabolic disturbances that may occur due to refeeding of malnourished patients who are persistently starved, as in the case of anorexia nervosa. It results from sudden shifting of fluid and electrolytes leading to marked electrolyte disturbances (with the hallmark feature being hypophosphatemia), seizures, and delirium, and it can be fatal.

In patients with depression, short-term administration of antidepressants or neuroleptics is reasonable. Due to low self-awareness of patients with this disease, it is difficult to achieve compliance, and therapy can span a period of several months to years.

The DSM-5 defines the following criteria for the diagnosis of bulimia nervosa:

In contrast to patients with anorexia nervosa, patients with bulimia mostly are of normal weight (sometimes slightly overweight), and this is sometimes the only differentiating point between them. They do not suffer from a body image disorder; however, they exhibit high psychological strain. They are often conscious of their disturbed eating behavior and are ashamed of it, and they use methods to hide it.

More than two-thirds of the patients show psychological comorbidities, such as depression, anxiety, and suicidal inclinations.

The physical examination may reveal the following signs:

Like anorexia nervosa, the treatment of bulimia consists of a combination of psychotherapy and pharmacotherapy.

Psychotherapy—and more precisely, cognitive behavioral therapy—is the first choice for therapy. The goal is to normalize the patient’s eating behavior and avoid the destructive binge-eating attacks. Furthermore, self-esteem must be strengthened, while the fear of gaining weight must be decreased.

With regard to pharmacotherapy, tricyclic antidepressants or selective serotonin reuptake inhibitors (e.g., fluoxetine) are suitable choices. Monoamine oxidase inhibitors are useful for treating coexisting depressive symptoms and for relapse prophylaxis.

If outpatient therapy fails, or if self-injuring or suicidal behavior is present, hospitalization may be necessary.

The DSM-5 defines the following criteria for the diagnosis of binge eating disorder:

In contrast to anorexia and bulimia, patients with binge eating disorder are mostly overweight or obese. One-third of all cases are men.

It is important to treat not only the patients’ dietary symptoms but also the underlying psychiatric issues (depression, anxiety, low self-esteem) and comorbidities (obesity, hypertension, etc.).

Similar to the other eating disorders, treatment is attempted with the combination of psychotherapy via cognitive behavior therapy, and medications (SSRI, TCA, etc.).

Overview of the differences between eating disorders

1. Bulimia nervosa mostly occurs in women between the ages of 18 and 35 years. Which symptom is not typical for this disease?

2. A 17-year-old girl visits her family doctor due to concentration problems and decreased performance in school. On physical examination, she has a height of 1.60 m and weighs 44 kg. When asked, the patient states that she feels well but would like to become productive in school again. Which disease matches her symptoms?

3. Anorexia is often accompanied by medical complications. Which of the following conditions is not typically related to anorexia nervosa?