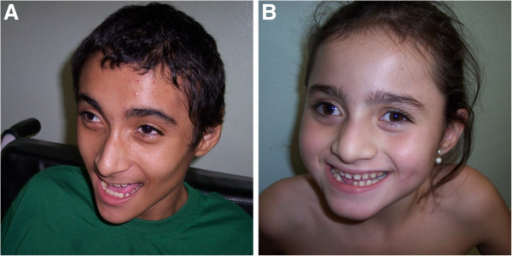 Definition of the Angelman Syndrome

AS is an infrequent neuro-developmental autosomal genetic disorder in which specific segments of chromosome 15 are functionally silenced on the paternal chromosome. Literature attests to the fact that the hypothalamus is the organ of primary damage. The cerebellum is also grossly involved. The cascade of subsequent implications that follows affects a variety of organ systems in diverse proportions. Exacting evidence to determine the tendency for hypothalamic and cerebellar damage is yet to be unearthed.

History of the Angelman Syndrome

Literature attests to the fact that “Angelman syndrome” is christened after a British pediatrician by the name of Harry Angelman. He was the first one to describe the syndromic aggregation of this disease in three children in Warrington in 1965. He is believed to have nicknamed the patients as ‘Puppet children’ after a painting in the Castelvecchio Museum in Verona “A boy with a puppet”.

Epidemiology of the Angelman Syndrome

AS epitomizes an unusual and rare constellation of symptoms and signs. Literature estimates a prevalence of about 1000 cases in the US and Canada. There is no sex discrimination and racial selective affliction seen in the natural course of the illness. The best epidemiological data hails from European countries. The reliable prevalence rate is estimated to be 1 in 10,000 to 1 in 20,000 live births from Swedish and Danish studies. 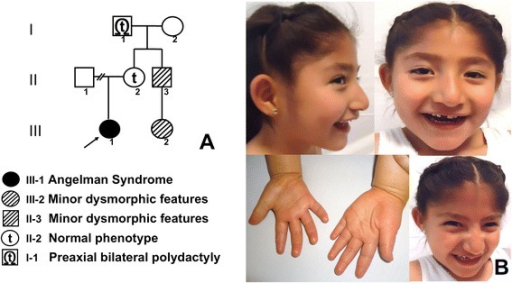 Genomic imprinting stands for expression of genes in a parent of origin-specific manner. Chromosome 15 encompasses a genomically imprinted sex-specific region. Genes are expressed only on the paternal and maternal chromosomes. Through hypermethylation, imprinting or specific turning of the corresponding alleles on the opposing homologous chromosomes takes place. Thus, DNA hypermethylation governs this epigenetic imprinting.

AS patients characteristically possess twice the normal amount of paternal chromosome 15 q segment (uniparental disomy) or absence of maternal homologous segment (microdeletion). Meiotic phase I non-disjunction culminates into heterodisomy and isodisomy. The maternal chromosomal segment is eliminated in heterodisomy as a desperate rescue attempt from the hazards of trisomy. The consequence is uniparental disomy of a paternally derived chromosome 15 segment.

Subsequent to genomic imprinting, only maternal copies of these genes are functional, and paternal alleles, even if present, are innately not expressed. About 70 % of the cases result from deletion of the maternal chromosomal segment, while the rest of the cases are accounted for by paternal uniparental disomy. The latter has 2 copies from the father and none from the mother.

Human and experimental mice studies have pinned down the loss of functional allele of the gene “UBE3A” as the predominant critical cause of AS. In normal subjects, the maternal copy of UBE3A is part of the ubiquitin pathway, the protein scavenging system. The paternal allele is functionally silenced, especially in parts of the brain such as the hippocampus and the cerebellum.

The most common etiology of loss of the maternal functional copy of UBE3A is a 4Mb (megabase) maternal deletion. This results in loss of function of E6-AP ubiquitin ligase which is primarily coded by the UBE3A gene. Ubiquitin ligase is a very selective enzyme. About 4 substrates of the same have been identified. Active research is still on to further elaborate the precise molecular mechanisms involved.

Single mutations, microdeletions can all silence the UBE3A functional allele. There are different mechanisms by which this functional loss occurs.

The same can be summarized in short as follows:

The similar process when reversed, the existence of 2 copies from the mother and none from father, result in Prader-Willi syndrome (PWS).

Clinical Features of the Angelman Syndrome

AS patients are essentially normal at birth. They usually manifest developmental delay at about 6 months to 1 year of age. Patients usually have all the features of AS by the age of 3 years. These include seizures, inappropriate laughter, neurocognitive and neurodevelopmental delay, and speech impairment. Seizures can manifest early, at the age of about 24 months.

The key clinical features which help clinch the diagnosis are:

The spectrum of AS symptoms are rather vast. While a few characteristics are consistently present, others are mere associations.

The symptoms can thus be segregated based on their relative frequency as follows:

Diagnosis of the Angelman Syndrome

In association with the Angelman syndrome foundation, diagnostic criteria were objectively set in 1995 and further amended in 2005.

The key features of the same can be tabulated as follows:

While earlier medical personnel relied mainly on clinical features, the current trend is to use clinical features prima facie to suspect AS mainly in patients with developmental delay and then confirm the same with modern genetic testing armamentarium. Different cytogenetic analysis techniques can be implemented to diagnose AS.

Some of the most commonly used ones can be summarized as follows:

Neurophysiological testing is increasingly being used to support the diagnosis of AS. Unfortunately, even though grossly abnormal, no particular features can be called pathognomonic of the disease.

The various abnormal interictal patterns observed can be summarized as:

Management of the Angelman Syndrome

A definite cure and treatment for AS are at best, enigmatic, at present. A circumferential multifaceted integrated approach is a prerequisite when one yearns to manage AS.

To ensure an independent future, the important elements to focus on can be summarized as follows:

Medical management in AS patients is far and largely limited.

Few drugs which are used commonly can be summarized as follows:

The education of parents and their cognizance of the disease and its behavioral repercussions are of critical significance. They need to understand the disease and their offspring and then decide on a management plan. Indeed, simple steps in this wake can be very helpful.

It is an unequivocal belief that comprehension of conversations is more advanced than fluency and verbalization of speech in these patients. They are naturally inclined to use non-verbal cues to express themselves. Most AS patients spontaneously generate a maximum of 5—10 words vocabulary. Parents need to be made aware of such limitations and encouraged to use ancillary methods of non-verbal expression and conversations.

Puberty and sexual development are not hindered in these patients. With intensive behavioral therapy and speech therapy, these individuals can be encouraged to lead a near-normal average lifespan. Health disturbances seen in adult AS patients include obesity and scoliosis. Interestingly, epilepsy becomes relatively tamed in adulthood.

Genetic Testing and Counseling of the Angelman Syndrome

In an attempt to predict the clinical evolution of these patients and determine the risk to future offspring and family members, genetic testing and counseling is a must. Curiously, albeit the existence of the basis of this syndrome in chromosomes, AS appearance is not hereditary, it is, literally, not a genetic disease.

The genetic dent occurs either in the process of meiosis, haploid gamete synthesis or in the early embryonic period. These alterations that culminate into the genetic aberrations of genomic imprinting are often spontaneous and sporadic. Thus, the risk estimate depends on the involved genetic aberration that occurs in the first place and can vary grossly accordingly.

The genetic turbulence can be situated in the sex-specific genomically-imprinted region. In these circumstances, AS takes on the traits of an autosomal dominant condition. Therefore, the odds that the next sibling will be affected are almost 50 %. In contrast, the prospective sibling is subjected to a risk of about 1 %, similar to the normal population, if the affected individual has uniparental disomy or gene deletion. This risk escalates to about 25 % when the etiology involves maternal chromosomal translocation. These risk estimates can be derived from the study of the morphology and pattern of the genetic aberration that exists in the first place.

Also, the genetic mechanism primarily involved determines the phenotypic infliction to some extent. Patients with UBE3A gene mutation have the mildest clinical symptoms, while patients with larger deletions on chromosome 15 have frank neurodevelopmental and neurocognitive damage.

Summary of the Angelman Syndrome

Angelman syndrome (AS) is an unusual genetic autosomal ailment where the loss of maternal alleles or duplication of paternal copies of the chromosome 15 q11-q13 segment results in loss of ubiquitin scavenging functions secondary to sex-specific genomic imprinting functional in this region. The reverse leads to Prader-Willi syndrome.

AS was, not a long time ago, a clinical diagnosis. Our diagnostic armamentarium now is inclusive of sophisticated genetic testing techniques like FISH and tests to detect hypermethylation to clinch the diagnosis of AS.