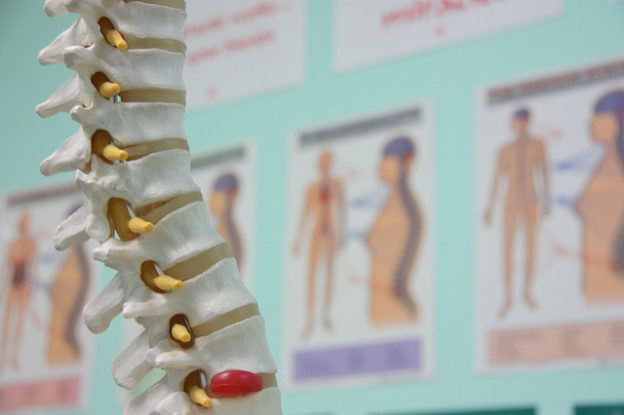 General Information About the Spinal Column

Overview of the spine

The human spine (vertebral column) is the most important anatomical and functional axis of the body. It consists of a total of seven cervical vertebrae, 12 thoracic vertebrae, and five lumbar vertebrae and is limited cranially by the skull and caudally by the sacrum.

The sacrum is a bony structure consisting of five merged sacrum vertebrae. The sacral vertebrae, however, are no longer motion segments because they are merged. Because of this, they are not counted as real vertebrae of the spine. The same is true for the tailbone (coccyx), which represents a fusion of four coccygeal vertebrae, which no longer contain motion segments.

Some people have six lumbar vertebrae (lumbarization of S1) or three to six coccygeal vertebrae. This, however, has no pathogenic effect on the skeletal system. Except in the segments C0/C1 and C1/C2, a disc is located between each vertebra, which primarily provides buffering and protection functions.

A clear S-curvature can be seen when the spine is observed laterally. The S-shape is determined by a lordosis of the cervical and lumbar spine, as well as kyphosis of the thoracic spine. The S-shape serves to mitigate longitudinal forces and lateral shear forces, even if the muscles intercept them more than the osseous and capsular ligament structures of the column vertebrae.

The spine is covered by the strong band systems that ensure stability and limit certain movements so that they cannot inflict any harm to the surrounding structures. Furthermore, the spine makes up the spinal canal, which serves as a port for the spinal cord and spinal nerves that pass into the peripheral neural structures outside of the canal.

Image: ‘Parts of a typical vertebra’ by Phil Schatz. License: CC BY 4.0.

The motion segment is the functional unit of the spine, which is formed by two adjacent vertebrae (e.g., C6 and C7 in the cervical spine). In addition, the following structures are part of the mobile segment:

The individual systems are anatomically and functionally perfectly matched and form a functional unit. Pathophysiologically, however, this means that a malfunction in one of the structures has an immediate negative impact on the other structures.

A lateral view allows observation of the block-like vertebral body, which forms the so-called borders cranially and caudally. These borders are bony ridges that limit the bearing surface of the disc onto the vertebral bodies and act as a point of fixation for fibrocartilage.

Image: ‘Osteoporosis’ by Phil Schatz. License: CC BY 4.0. The picture was cut.

In the transverse section, the vertebrae are structured anteriorly convex and posteriorly straight. The osseous body itself is made of a cancellous bone structure, which is encased in cortical bone. These structures ensure that the fault lines within the corpus run cranially to caudally to the spine and ensure transmission during axial compression. If this system did not exist, the lightest pressure forces would cause the vertebral body to fracture. The base and end plates covered with hyaline cartilage close the corpus from the disc; the disc surface facing the spinal disc consists of fibrocartilage.

From the vertebral arch, three processes are projected. The spinous process (or spine) is present in the posterior midline, while the two transverse processes are present on either side at the junction of the pedicle and lamina.

Due to the ‘building-block’ appearance of the spine, the vertebral foramina collectively form the vertebral canal through which the spinal cord runs along with its meninges and associated structures. In the lumbar spine, the transition region between the spinal canal and intervertebral foramen is described as a lateral recess, which is lined with epidural fatty tissue. Here, the nerve root passes through.

The spinal canal (or vertebral canal) forms a passage opening for a number of important structures of the human body. This contribution is limited to the neuronal structures’ spinal cord, and the spinal dura mater.

The spinal cord is a core element of the central nervous system. It ends at L1/L2 with the conus medullaris, which continues caudally in the cauda equina. Furthermore, the spinal cord consists of cervical and lumbosacral enlargements, from which the cervical and lumbar spinal nerves emerge and form their respective plexus.

The transverse processes spring from the vertebral arch of each vertebra from the junction of the pedicle and the lamina and differs depending on the segment in size, shape, and orientation in the cavity.

In the cervical spine, the transverse process bears anterior and posterior tubercles. Between these bony structures, the transverse foramen is located. It serves as a pass-through opening for the vertebral artery.

In the thoracic spine, the transverse processes are dominantly established and are equipped with articulating surfaces, which articulate with the tubercle of the ribs.

In the lumbar spine, the transverse process bears three tubercles/processes: the costiform process, the mamillary process, and the accessory process. 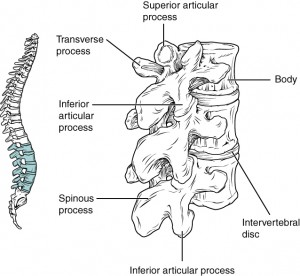 The spinous process (or spine) is the posterior bony projection of the vertebral arch. It is a fixation point for muscles and ligaments and is also a noticeable starting point in palpation diagnostics. It splits up in two (kind of like a fishtail) in the segments C2–C6 and merges again from C7 onward. In the thoracic spine, the spinous processes are very long and have an oblique caudal course, while in the lumbar region they are formed high and are more heavily built.

The intervertebral foramen is formed by the superior and inferior vertebral notches of each adjacent vertebral segment and serves as a passage opening for the spinal nerve, meningeal branch, spinal artery, and intervertebral vein.

Image: ‘Parts of a typical vertebra’ by Phil Schatz. License: CC BY 4.0.

The facet joints are real joints, each of which consists of cartilage-covered surfaces and a joint capsule. They absorb compressive forces and transmit them so that movements can be performed selectively and without injury. The control is achieved via proprioceptive receptors in the capsular ligaments.

Due to the spatial alignment of the joint surfaces, certain movements can be made better or worse than in other portions of the spinal column. The angle of inclination of the articular surfaces in the cervical spine is approx. 45°, relative to the horizontal, while this angle is significantly higher in the thoracic spine, approx. 80°. In the lumbar region, the angle of inclination is about 90°, which makes the rotation in the lumbar spine significantly lower than that of the thoracic or cervical spine.

The human body has 23 intervertebral discs because there are no discs located between the two upper cervical segments (the atlas and the axis). Their diameter varies according to the size of the spinal ‘column’ because of the different pressure loading conditions. The intervertebral disc is divided into two parts: the annulus fibrosis and the nucleus pulposus.

The annulus fibrosis is composed of several layers and encloses the spinal disc nucleus, the nucleus pulposus. It is composed of 60–70% water. The layers are composed of collagen fibers running in different directions depending on the layer. This is for compiling enough compressive and tensile strength during every movement, functioning as a shock absorber, and protecting the discs from immediate rupture. The annulus fibrosis is attached by its sharp fibers to the edge strips of the vertebral body and is adhered dorsally with the posterior longitudinal ligament. It shares low fiber contents with the anterior longitudinal ligament.

The nucleus pulposus is a gel-like substance inside the disc. It consists of a combination of collagen fibers and glycans (proteoglycan and glycosaminoglycan), resulting in a high matrix formation and, therefore, strong water-binding capability. The nucleus pulposus contains neither vessels nor nerves and serves the voltage shift of discs during spinal movements. It receives its nutrition from the surrounding vessels by the process of diffusion. Overnight, the disc takes on liquid, which increases its height. This is the reason a person is taller in the morning after a restful night’s sleep.

When a herniated disc nucleus occurs, the nucleus emerges through a tear of the annulus fibrosis and compresses the nearby spinal nerve roots, which may result in pain and neural deficits.

Image: ‘Ligaments of the vertebral column’ by Phil Schatz. License: CC BY 4.0.

Ligament system of the spinal column

A motion segment can only be fully understood with its functional ligament structures. They stabilize the spine in the neutral zero position and limit movements before they fall into pathologic proportions and delicate structures can be irritated or damaged.

This ligament originates at the clivus of the occipital bone and runs the entire dorsal side of the spine to the ventral edge of the sacrum canal. On its way, it connects with the annulus fibrosis of the intervertebral discs in each segment, as well as the marginal edges of the vertebral bodies. Its purpose is to stabilize the posterior intervertebral disc area and to control or limit flexion.

As the name suggests, the interspinous ligaments extend from the spinous process to spinous process of the adjacent vertebral bodies. They also connect to the supraspinous (dorsal) and the flava (ventral) ligaments. In the cervical spine, they become a part of the lig. nuchae and serve to stabilize, control, and limit flexion, lateral flexion, and rotation.

Like the supraspinous ligament, the intertransverse ligament also connects the spinous process tips of adjacent vertebral bodies. It limits both flexion and lateral flexion.

The flava ligaments extend over the dorsolateral spinal canal and originate from the vertebral arch lamina of two adjacent vertebrae, or insert into them. In the thoracic and lumbar spine, they are connected to the joint capsule of the zygapophysial (facet joint) type. It is one of the strongest ligaments of the spine and stabilizes the vertebral arch joint during flexion.

Movement axes of the spinal column

The movement axes of the spine are located in the intervertebral disc.

If someone performs a flexion of the spine, the intervertebral disc and the ventral vertebrae are compressed, and the inferior articular surface of the cranial vertebra slides cranially. In biomechanics, this phenomenon is called divergence. Conversely, during spine extension, the dorsal portions are compressed, the intervertebral foramen narrows, and the facets of the facet joints lock. This movement is called convergence.

Diseases of the spinal column

For the purpose of clarity, this portion will be limited to just three examples.

When the water content in the body, and therefore also the disc, decreases with advancing age, the amount of collagen fibers increases. The result is a hardening of the nucleus pulposus and a decrease in disc height. Thus, the cover plates are stressed and cracking occurs in the annulus fibrosis. This results in sclerotherapy, or a rupture of the annulus fibrosis, which may cause a prolapse.

If all tissue layers of the annulus fibrosis rupture, the gel-like nucleus pulposus leaks outwardly and compresses the delicate tissue (colloquially, a herniated disc). If the nucleus pulposus enters into the spinal canal and irritates the spinal nerve, pain can develop and neuronal lesions (such as paresthesia or motor paralysis) can occur. Depending on the height of the segment at which the prolapse occurs, it can also lead to the loss of bladder and rectum function (cauda equina syndrome). If the nucleus dissolves completely from the annulus, this is called sequestration. If the nucleus only penetrates partially, and without the annulus fibrosis completely tearing, this is known as a protrusion.