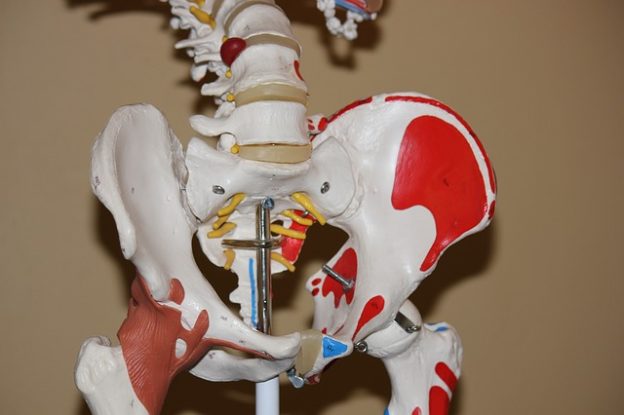 Anatomy of the Hip Joint

The hip joint is a cotyloid joint or ball-and-socket joint. It consists of the acetabulum (hip socket) and the femoral head (ball) of the femur. It has 3 degrees of movement: flexion/extension, abduction/adduction, and internal/external rotation. 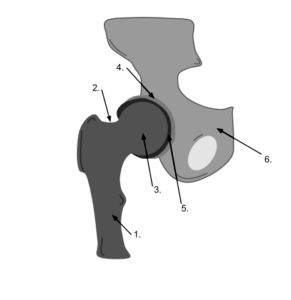 The acetabular labrum is a triangular-shaped structure consisting of dense connective tissue and fibrocartilage. It forms a ring around the acetabulum and is fixed at the acetabular limbus, the osseous ridge that surrounds the acetabulum proximally. It serves as an enlargement of the articular socket surface.

The acetabular incision is an indentation at the socket edge and is devoid of  labrum. It is located at the suture area between the pubis and ischium, and is covered by the transverse acetabular ligament.

Femoral parts are distinguished based on the  parts that are directly part of the joint and those that are close to it:

The spherical, convex head of the femur is the articulating surface of the femur and forms the distal part of the hip joint.

Fovea of the femoral head 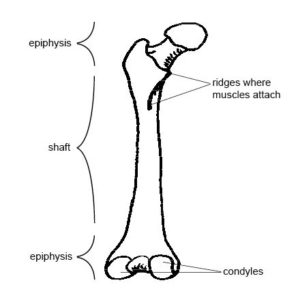 The greater trochanter is an apophysis and lies lateral to the trochanteric fossa. It serves as the insertion point of the gluteus medius and minimus muscles, the piriformis muscle, the internal obturator muscle, and the gemellus muscles.

The ‘little brother of the greater trochanter’ is located medial to the intertrochanteric line and among other functions, serves as the insertion point for the iliopsoas muscle.

The intertrochanteric line lies ventrally between the greater and lesser trochanters and serves as the insertion of the iliofemoral ligament and as the origin of the vastus medialis muscle.

The intertrochanteric crest is an osseous ridge that connects the greater and lesser trochanters. Among other functions, it serves as the insertion of the hip joint capsule.

The trochanteric fossa is a depression which is located dorsomedial to the greater trochanter. It serves as the insertion of the external and internal obturator muscles and the superior and inferior gemellus muscles.

The gluteal tuberosity lies cranial to the linea aspera and serves as the insertion point of the gluteus maximus muscle.

It lies ventral to the linea aspera towards the greater trochanter and is the insertion point of the pectineus muscle.

Here you can read more about the muscles of the hip and thigh.

Functional Anatomy: Angles of the Femur 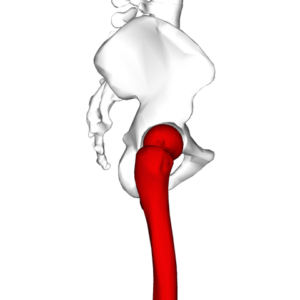 Articular Capsule of the Hip Joint

The articular capsule of the hip joint is one of the strongest capsules in the body. It consists of 2 layers: the fibrous membrane and the synovial membrane.

The fibrous membrane is firm and thick with fibril bundles that run in the longitudinal and diagonal direction. They insert at the edge of the acetabulum, the transverse ligament of the acetabulum, and the intertrochanteric line of the ventral femur. The dorsal insertion point is the femoral neck medial to the intertrochanteric crest. The membrane is studded with mechanoreceptors, which lead proprioceptive afferents to the central nervous system.

Synovial membrane inserts at the outer edge of the base of the acetabular labrum, at the cartilage-bone border, and at the intertrochanteric crest. Since the pointy edge of the labrum does not articulate with the membrane, the recessus perilimbicus is formed between the capsule and the labrum.

The membranes serve as an axis for vessels and supply the femoral neck with blood on their way to the hip head. Also, the synovial membrane forms a tube around the ligament of the femoral head that keeps the joint away from the acetabular incision and the acetabular fossa.

Ligaments and Bursae of the Hip Joint

Ligament of the femoral head

The ligament of the femoral head lies within the joint and is covered by a synovial membrane. The bundle of fibers runs from the anterior and posterior horn of the lunate surface and the superior edge of the transverse ligament of the acetabulum to the fossa. It is subject to tension when the flexion, adduction, and external rotation movements are combined. This ligament is often referred to as teres femoris ligament in other medical textbooks and journals.

Transverse ligament of the acetabulum

This ligament supports the head of the femur inferiorly and connects the ends of the labrum (outer layer) and the 2 horns of the lunate surface(inner layer).

This ligament is V-shaped and is divided into a lateral part and a medial part. The common insertion point is the intertrochanteric line, and the tip of the V is fused with the rectus femoris muscle. The lateral part, also called Bertini’s ligament is the strongest ligament in the human body since it can resist tensile stress of up to 350 kg. The medial part (lower tract) is very thin compared to the lateral one. The fibers spiral with each other. They relax in case of external rotation.

This ligament runs from the iliopectineal eminence and the obturator crest to the intertrochanteric line where it connects to the iliofemoral ligament. Additional connections are established with the articular capsule and the zona orbicularis.

The zona orbicularis ligament is a loop which contains fibers of all extra-articular ligaments. It is connected to the articular capsule.

The iliopectineal bursa protects the thin articular capsule and is located between the iliofemoral and the pubofemoral ligaments. It is located under the tendon of the powerful iliopsoas muscle.

Innervation of the Hip Joint

Altogether, 5 nerves supply the hip joint and its structures. They are the femoral nerve, the obturator nerve, the ischiadic nerve, the superior gluteal nerve, and the quadratus femoris nerve. 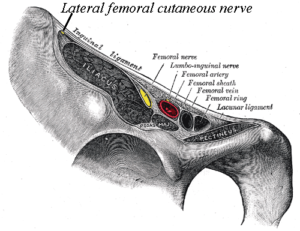 This nerve gives off a branch to the anterior articular area. This branch runs distally of the lateral circumflex femoral artery.

The obturator nerve sends fibers to both the hip and the knee joints. The fibers originate from the segments L3-L4 and run to the caudal hip joint.

The ramus acetabularis coxae of the ischiadic nerve branches off shortly before the infrapiriform foramen and supplies the dorsal hip joint.

This nerve supplies the superior lateral part of the hip joint.

The branches of the quadratus femoris nerve innervate the dorsocaudal hip joint.

Arthritis of the hip joint is caused by the progressive abrasion of the cartilage. Patients suffer from immobilization and pain in the joint. The condition can be treated surgically with total hip arthroplasty (joint replacement).

Pectineal bursitis is an inflammation of the bursa that may develop from continuous overuse or infections. Patients with pectineal bursitis are likely to experience pain when contracting the iliopsoas muscle. 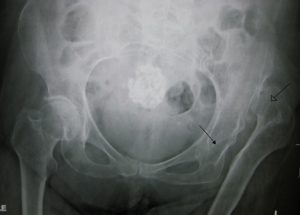 Dislocation of the hip joint mostly occurs in cases of severe trauma. At extreme external rotation, the femoral head can be pressed ventrally and levered out of the socket. Inappropriate patient movement after total hip replacement surgeries can result in postoperative dislocation.

Fracture of the femoral neck and necrosis

Necrosis can also occur due to old age if the ligament of the femoral head s not sufficiently supplied with blood and degenerates.

Hip dysplasia is an innate or acquired malformation of the hip socket. If the diagnosis is delayed, it results in irreversible damages in the articulating osseous structures, which leads to pain and limp. Extreme dysplasia makes the hip joint chronically unstable and vulnerable to dislocation. Treatment of dysplasia depends on the degree of the disease.