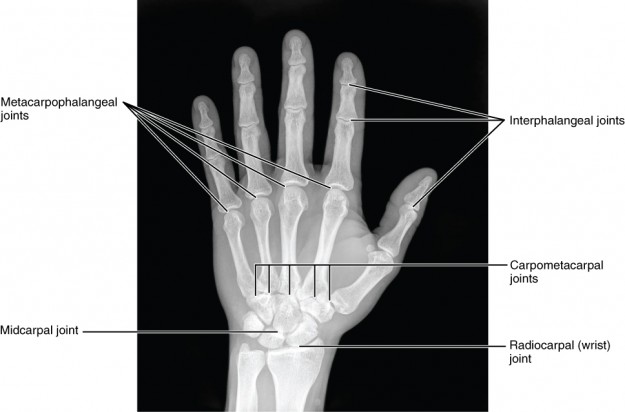 Image: “Radiograph of Hand” by Philschatz. License: CC BY 4.0

Surface Anatomy of the Hand Joint

When the hand joint is discussed in human medicine, two categories are discussed:

Note: Functionally, the articulatio radioulnaris distalis does not anatomically belong to the hand joint, as it facilitates supination and pronation of the hand, and this movement occurs in the forearm and not in the hand.

The hand joint is an extraordinarily mobile joint and moves along a horizontal and sagittal axis. The horizontal axis runs parallel to the slope of the radius and the caput ossis capitatum.

The average movements of the hand joint include:

The radius and the discus ulnocarpalis articulate with the proximal carpal series and form the art. radiocarpalis, the proximal hand joint, which is an ellipsoidal joint. 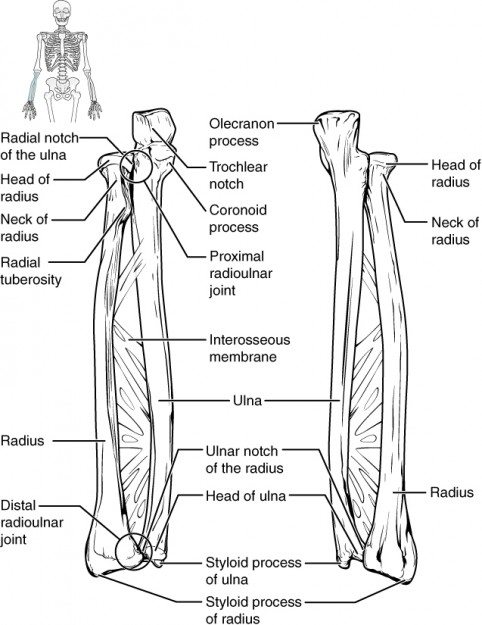 The facies articularis carpalis is the joint surface pointing distally and articulates with the proximal carpal series. It carries two concave facets that touch the os scaphoideum and the os lunatum, respectively, and are designated as fovea scaphoidea and fovea lunata, accordingly. Both facets are separated from each other by a cartilage-covered bar. The ulnar-oriented joint surface is the incisura ulnaris, which enters the fovea lunata laterally.

The dorsally protruding caput ulnae end in the processus styloideus ulnae. These bony structures have no direct contact with the proximal carpal series, unlike their radial counterparts. The key contact for articulation is provided via the discus articularis ulnocarpalis with the os lunatum and the os triquetrum.

Both structures fill the osseous gap between the distal ulna and the proximal carpal series, with variable localization despite the small space.

The palmar and dorsal edges of the disc are also joined with the joint capsule, which is supposed to prevent dislocation of the disc during terminal motion. It is provided with blood and nutrients via dorsal and palmar vascular arcade, such that only the outer layers are in direct contact with the vessels. The inner area is avascular and is nourished by pressure and release, similar to the intervertebral discs and menisci of the knee joint. 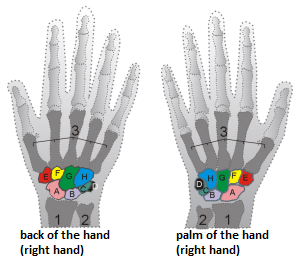 The scaphoid articulates with the radius with its convex joint surface. It contains the additional ulnar osseous contact with the os lunatum, distal-ulnar with the os capitatum, and distal-radial with the ossa trapezii. The palmar tuberculum scaphoideum is an insertion point for the ligamentum carpi transversum.

The os lunatum is a relatively small carpal bone resembling a half-moon. Its proximal joint surface is convex and articulates with the fovea lunata radii. Furthermore, it also makes contact with the interosseous disc, the os capitatum, the os scaphoideum, and the os triquetrum.

The convex os triquetrum only makes contact with the interosseous disc during ulnar abduction. It also contacts the os hamatum and the os pisiforme.

The os pisiforme is located directly on top of the os triquetrum and is a sesamoid bone that inserts into the end tendon of the musculus flexor carpi ulnaris and its carpal ligament extensions. It also serves as an insertion point and origin for:

Therefore, the translatability of this bone is very low and occurs only in radial and ulnar directions.

The joint capsule of the proximal hand joints inserts into the bone-cartilage threshold of the proximal carpal series as well as the radius. The disc ulnocarpalis is intracapsular, and its end fixation is located in the distal corner of the ulna.

The membrana fibrosa is connected to the palmar and dorsal ligaments and is substantially connected dorsally with the synovial tendon sheaths. The capsule also forms a rec. ulnaris between the meniscus and the disc, as well as small palmar and dorsal recesses radially. 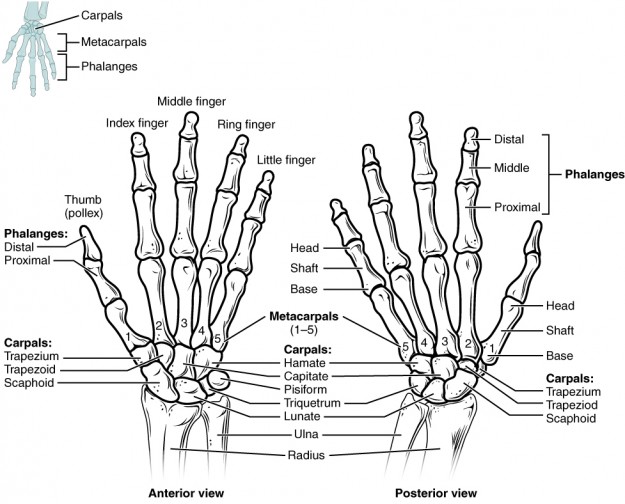 Image: “Hand and Wrist” by Philschatz. License: CC BY 4.0

Bones of the distal carpal series include os trapezium and os trapezoideum (ossa trapezii), and os capitatum and os hamatum.

Ultimately, it connects with the basis ossis metacarpalis II. The tuberculum ossis trapezii bears an osseous groove carrying the tendons of the m. flexor carpi radialis and serves as an insertion point for the lig. carpi transversum.

This is the smallest of the carpal bones and forms a concave joint surface with the os scaphoideum. It is also connected with the os capitatum, the os trapezium, and the basis metacarpalis II.

Two ulnar facets articulate with the os metacarpale IV and the os hamatum. Thus, the os capitatum makes the greatest osseous contact in the carpus.

The joint capsule of the distal hand joint is located at the bone-cartilage threshold of both carpal series. It forms a large number of small recesses and frequently communicates with the carpometacarpal joints.

Ligament Structures of the Hand Joint 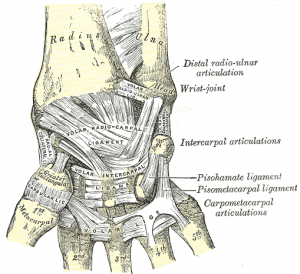 The meticulous hand joint, with its multitude of carpal bones, is heavily permeated with ligaments that provide stability and prevent dislocation during movement. They are localized in various layers or arranged functionally, with each layer carrying a different number of ligaments.

From the palmar corner of the proc. styloideus radii, the radial collateral ligament runs to the radial side of the os scaphoideum and the tuberculum ossis scaphoidei. It is connected to the tendon sheath of the m. flexor carpi radialis and stabilizes the radial side to inhibit ulnar abduction.

The dorsal pathway starts from the proc. styloideus ulnae and the disc, and runs to the os triquetrum. The palmar pathway runs from the palmar radius to the os pisiforme. It is joined with the disc and the meniscus. It stabilizes the ulnar side and inhibits radial abduction. 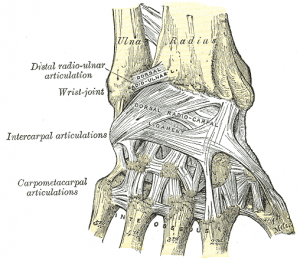 The lig. intercarpalia dorsalia form the ligaments of the dorsal deep layer. They are intrinsic and interosseous ligaments, which facilitate carpal stability due to their firm and strong fiber strands.

The middle layer of the dorsal side is formed by the lig. radiocarpale dorsale and lig. carpi arcuatum. The radiocarpal ligament extends from the radius to the os triquetrum, os lunatum, and os scaphoideum, each comprising its own fiber pathways, which especially stabilizes the art. radiocarpalis.

The proximal pathway of the lig. carpi arcuatum extends from the os scaphoideum to the os triquetrum, while the distal pathways connect the os triquetrum with the ossa trapezii. It also serves as the transverse brace of the carpal series.

The retinaculum extensorum forms the surface layer of the dorsal side and is a broad supporting ligament for the extensor tendons in the fingers. It forms a total of six compartments, each carrying a single specific tendon. Intermediate septa connect the retinaculum with the radius as well as the ulna.

Located in the palmar deep layer are the lig. intercarpalia palmaria, which are interosseous ligaments that connect all of the carpal bones together. They are united with the joint capsule and provide increased stability against pathogenic osseous translation.

A special ligament of this group is the lig. pisohamatum, which links the os pisiforme and os hamatum. It closes the Loge de Guyon, an osseous ridge formed by the two bones, and protects the ramus profundus of the nervus ulnaris inside it.

Similar to the deep layer, the middle layer also carries an abundance of ligamentous structures including lig. carpi radiatum, lig. radiocarpale palmar and lig. ulnocarpale, which indicate the respective bones they connect and stabilize.

The retinaculum flexorum and the lig. carpi palmar form the palmar surface layer.

The retinaculum flexorum is one of the deep forearm fascia and is also referred to as the lig. carpi transversum. It is connected to both the ulnar and radial carpal bones and forms the primary threshold of the carpal tunnel. It also braces the arch of the hand.

Functional Anatomy of the Hand Joint

Due to the structure of the proximal hand joint, the socket of the radius is not perpendicular to the longitudinal axis of the forearm, but rather forms a 20° angle referred to as the radial joint surface angle. Further, the socket of the radius is sloped 10° sagittally as the sagittal radial joint angle. Both angles are essential for the smooth mobility of the proximal carpal series against the surface of the radius, to facilitate a complete and active range of motion in all possible directions.

Examples of Diseases of the Hand Joint

The hand joint exhibits a high degree of pathogenicity and a plethora of lesions. We will only discuss a few of the most common diseases and symptoms associated with the hand. 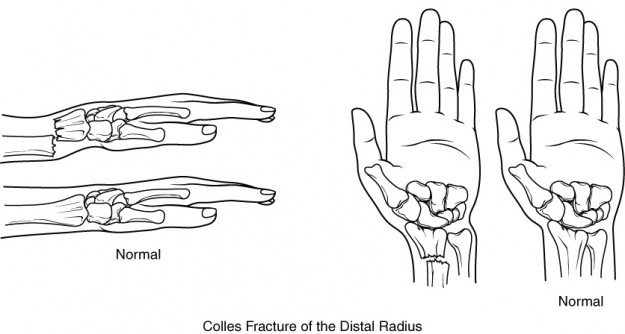 Distal radius fracture occurs in many forms and levels of severity. Compression fractures triggered by falls on an outstretched arm are the most common types of fracture. Shearing fractures sustained via ulnar, radial, dorsal and palmar fragmentation may occur with or without dislocation.

Depending on the direction of dislocation, the medial nerve, as well as the disc, can be compromised or injured. Fractures without dislocation are usually treated for 6 weeks conservatively via cast immobilization, whereas fractures with associated dislocation are treated surgically.

In advanced age and in patients with a history of heavy strain involving the hand joints, a painful degeneration of the interosseous disc is often diagnosed. The os lunatum and caput ulnae are non-physiologically strained, which lead to inflammatory changes in the bone.

Furthermore, excessive strain and the resulting inappropriate care of the disc can cause ruptures. Depending on the level of injury, the disc can be treated conservatively or operatively.

The causes of lunatum necrosis have yet to be established. It may be triggered by overload due to excessive pressure in the dorsal extension. However, the etiology is not supported by robust clinical evidence. Necrosis of the carpal bone leads to joint incongruity, and eventually results in arthritis of the hand joint.