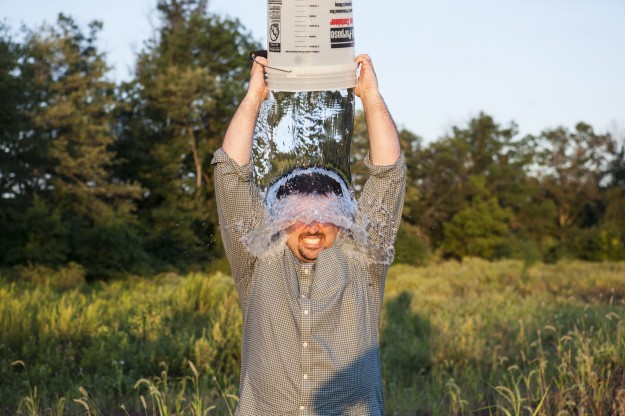 What is Amyotrophic Lateral Sclerosis (ALS)?

Amyotrophic Lateral Sclerosis (also known as ALS or Lou-Gehrig’s disease) is a degenerative disease of the central nervous system. 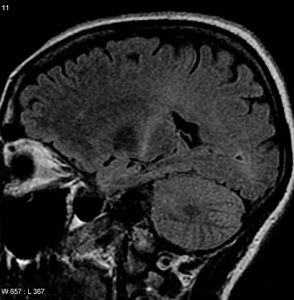 Image: Amyotrophic lateral sclerosis. MRI (parasagittal FLAIR) demonstrates an increased T2 signal within the posterior part of the internal capsule and can be tracked to the subcortical white matter of the motor cortex, outlining the corticospinal tract, consistent with the clinical diagnosis of ALS. By Frank Gaillard, License: CC BY-SA 3.0

Reminder: The motor system in the CNS is represented by the primary motor cortex located in the precentral gyrus (upper motor neurons), which sends efferent nerve fibers through the corticospinal tract to the alpha motor neurons (lower motor neurons) in the anterior horns of the spinal cord.

With a global incidence of 2–3/100,000, ALS is a relatively rare disease. The peak incidence occurs in the 5th to 7th decade of life, with men more often affected than women.

Most cases of the disease (90%) are sporadic. The remaining 10% are so-called familial cases of ALS (autosomal dominant inheritance), caused by a variety of genetic mutations. The mutations are associated with the gene coding cytosolic Cu-Zn superoxide dismutase (SOD1) located on the q arm of chromosome 21 (SOD1 mutation). This enzyme is responsible for the detoxification of free superoxide radicals.

Other proteins that have been the focus of interest include the RNA-binding proteins FUS and TDP-43, elevated levels of which are found in the cytosol of affected neurons.

Usually, the distal extremities are affected first and the patients present with asymmetric weakness.

Toxic over-stimulation of the affected neurons (excitotoxicity) by the neurotransmitter glutamate is also a potential causative factor. This theory is corroborated by reports suggesting the mechanism of action of riluzole, the only authorized and demonstrably effective medication for ALS, which inhibits the release of glutamate from the synapses.

Note: Nearly 90% of cases occur sporadically, and the remaining 10% are of genetic origin, with mutations mainly affecting the cytosolic Cu-Zn superoxide dismutase (SOD1), which is responsible for detoxifying free superoxide radicals. Furthermore, glutamate excitotoxicity is considered as a potential causative factor of ALS.

The clinical presentation of ALS is characterized by concurrent symptoms triggered by the upper or lower motor neurons.

Affected patients complain of muscle cramps and muscle weakness of the upper and lower extremities (usually starting at the distal end) and of the trunk, muscle atrophies (usually starting with the small muscles of the hand), and involuntary and occasionally painful muscular contractions (fasciculations). During the course of the disease, bulbar symptoms such as fasciculations and weakness of the lingual muscles, weakness of mimic muscles, dysphagia with (pseudo)ptyalism, dysarthria, and pathological laughing and crying can occur.

Furthermore, cognitive deficits such as frontotemporal dementia have been observed. However, respiratory insufficiency develops at a progressive stage of the disease and is a life-threatening aspect of the condition. It involves dyspnea and an increased risk of bronchopulmonary infections.

Diagnosis of exclusion for ALS

The diagnosis of amyotrophic lateral sclerosis is established by exclusion. In accordance with the so-called El Escorial criteria postulated by the World Federation of Neurology (WFN) in 1998, a diagnosis is only confirmed when at least 3 body regions (out of bulbar, cervical, thoracic, and lumbosacral motor neurons) show clinical and electrophysiological signs of motor neuronal damage (upper and lower motor neurons). However, the practical value of these criteria is disputed since a definitive diagnosis is only possible in an already progressive stage of the disease.

Extensive neurological examination of the aforementioned findings is essential together with a comprehensive electrophysiological evaluation: 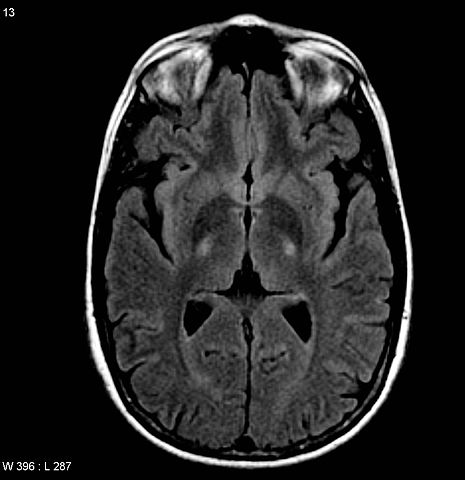 In accordance with standard recommendations, further differential diagnosis should be based on an MRI in order to rule out spinal causes (e.g., myelopathy, radiculopathy). Extensive laboratory testing based on the following parameters is also needed:

During the follow-up care, lung function (vital capacity) and body mass index (BMI) should be assessed. In case of high incidence of ALS within a family, genetic testing should be performed to screen for mutations (SOD1, TDP-43, FUS).

Note: ALS is a diagnosis of exclusion. Essential examinations include comprehensive neurological testing, electromyogram, electromyoneurography, and genetic testing of cases of patients with familial ALS.

No causal treatment for ALS exists currently. The only medication that has been proven effective is the glutamate antagonist riluzole, which has been shown by several studies to prolong survival time. Edaravone is the second drug approved for ALS treatment. Edaverone acts as an antioxidant, and is administered as a recurring monthly series of daily intravenous infusions over 10 days. Further, the treatment strategies are focused on symptom management as follows.

Note: As of 2014, no causal treatment for ALS is available. The only authorized medication is riluzole (a glutamate antagonist), which has been shown to prolong survival time.

ALS is a progressive and fatal disease. The median survival is 3–4 years from the time of diagnosis. However, a slower progression with longer survival is possible.