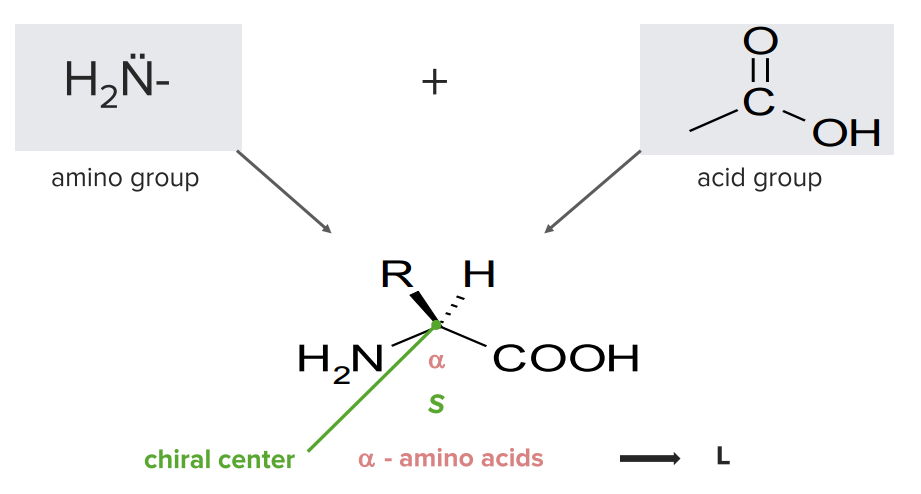 An amino acid is any compound whose structure contains an amino group and a carboxyl group. In the context of biomolecules, α-amino acids are more important. For α-amino acids, the amino group is attached to the α-carbon or the carbon adjacent to the carboxyl carbon. In this article, the term amino acids will be used to generally refer to α-amino acids.

Since all amino acids contain an amino group and a carboxyl group, the structural differences in amino acids arise from the variety of R groups that can be present. Different R groups have varying degrees and types of interaction with the environment and other components. Understanding the chemistry of amino acid side chains is important for understanding the properties of individual amino acids and the proteins they form.

The rest of the amino acids will be mentioned later in the article.

Amino acids can be classified in many ways. One common method of classification is based on their interaction with water. Amino acids are considered hydrophobic (water-repelling), hydrophilic (water-attracting), or ionic. Depending on the type of R group, it can be determined whether an amino acid will belong to any of the 3 groups.

Hydrophobic amino acids have side chains that are considered non-polar. Since water is a polar molecule, the non-polar side chains repel water and so in a protein structure, these R groups are usually buried in the core of the protein. Below are the structures of the different amino acids in this group. 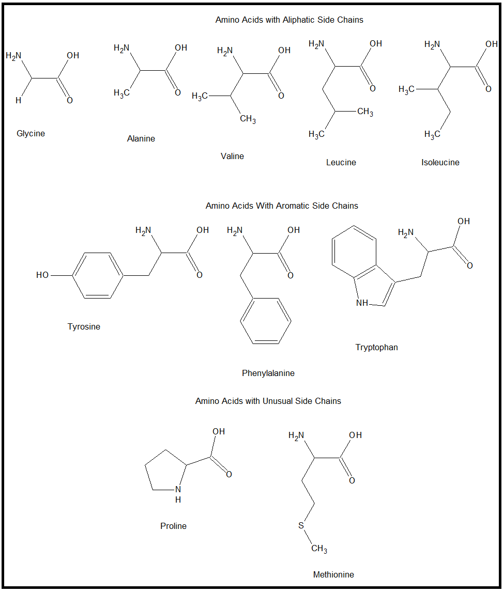 The smallest amino acid is glycine. Glycine is considered a hydrophobic amino acid because its side chain is just a single hydrogen atom. Unlike most amino acids where the α-carbon is chiral (i.e., has 4 different substituents around it), glycine is the only one with no chiral center.

Other amino acids in this group have hydrocarbon side chains, and include:

Hydrocarbon side chains are also considered non-polar due to the presence of only C and H atoms which have close electronegativity values. Amino acids containing aromatic side chains are also part of this group. These included phenylalanine, tyrosine, and tryptophan. Methionine and proline are also members of this group because of their unique structural characteristics. Methionine has a thioether group while proline contains a cyclic structure where the amino and the α-carbons are part of the cycle.

Hydrophilic amino acids have polar side chains that are not readily ionizable. Common functional groups present in these side chains are carboxamide, sulfhydryl, and hydroxyl groups. Six amino acids are members of this group.

The amino acids with carboxamide functional groups are asparagine and glutamine. They are amide derivatives of aspartate and glutamate, respectively.

Cysteine has sulfhydryl groups and when cysteine molecules are oxidized, they tend to form disulfide linkages.

The amino acids with hydroxyl groups in their side chains are serine, threonine, and tyrosine.

Acidic amino acids have side chains that contain additional carboxyl groups. Depending on the pH of the solution, these side chains can be deprotonated. Amino acids in this group include aspartic acid and glutamic acid. Below the structures of the different ionic amino acids are highlighted. 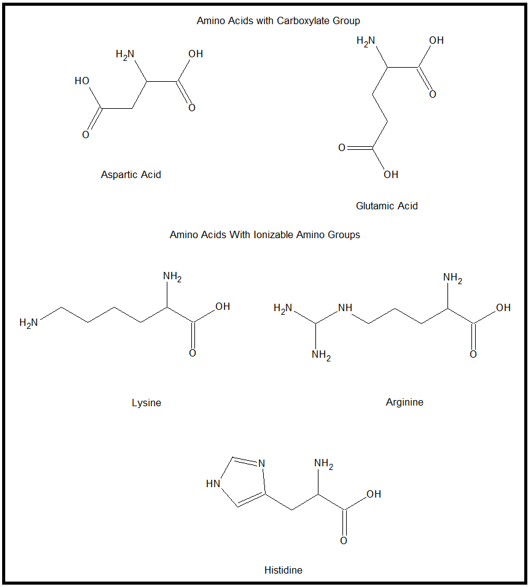 Generally, amino acids have high melting points. They are also more soluble in water than in ether or dichloromethane. They have large dipole moments compared to normal amines and carboxylic acids, and are less acidic than normal carboxylic acid and less basic than normal amines. Because amino acids possess basic and acidic parts in their structure, they are also considered as amphoteric compounds, exhibiting both basic and acidic properties.

At a neutral pH, both the amino and carboxyl groups exist in their ionic form. When the pH of a solution is increased, the –COOH tends to donate a proton to form a –COO- group. However, when the pH of the solution is decreased, the –NH2 tends to accept a proton to produce the –NH3+ group. The presence of another carboxyl, amino, or hydroxyl group in the side chains also contributes to the degree of ionization in varying pH values.

One thought on “Amino Acids — Structural Features, Classification and Ionization”