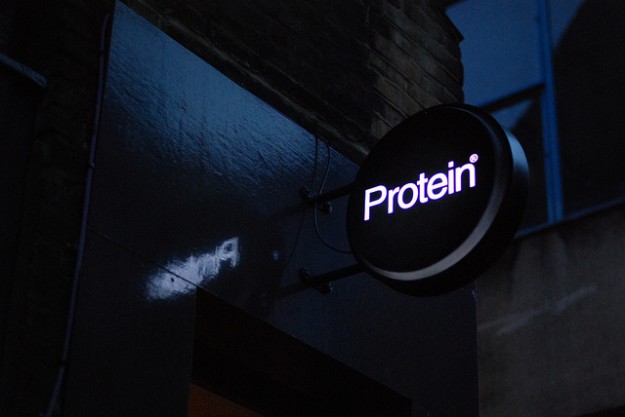 One can safely deduce the components of an amino acid from the name: they include a carboxylic acid part, namely a part that contains a carboxylic functional group.

Then comes an amine group on the left side of the α-C-atom, which is the 2nd carbon atom to the carbon atom with the highest oxidation state. In this case, it is the C-atom of the carboxylic group. In a strict sense, this is an α-L-amino acid. Next to the carboxylic and amine group, a hydrogen atom and an R-side chain (R is used to convey residue or root) are substituents attached to the α-C-atom. Each amino acid contains a different side chain, which defines specific properties. 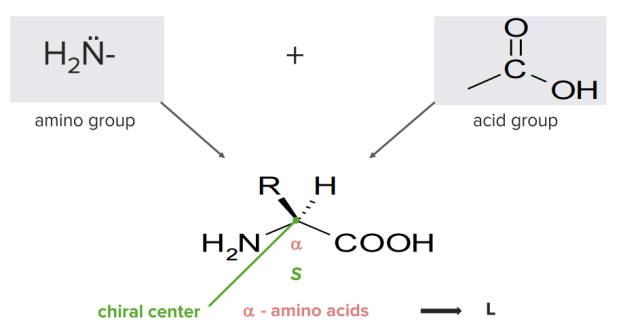 Proteinogenic amino acids are those that can be found in human proteins. Currently, the scientific community is familiar with 21 amino acids, which can be divided as follows:

The essential, or indispensable, amino acids are those that have to be supplied to human organisms through diet because they cannot be synthesized. Those include methionine, threonine, valine, histidine, tryptophan, phenylalanine, isoleucine, leucine, and lysine.

Amino acids are amphoteric molecules, which means that they possess both basic and acidic properties and therefore constitute very good buffer systems. Their functional groups are the reason: The amino group has a free unbound pair of electrons on the N-atom that can function in a basic way and accept a proton. On the other hand, the carboxylic group releases a proton due to a positive electrical charge of the H-atom, thus functioning in an acidic way. In this way, an individual molecule can, at the same time, assume both the role of the proton donor and the proton acceptor.

This intracellular protolytic reaction leads to the formation of zwitterions, namely compounds containing carboxylate and an ammonium group, which are firmly bound together in a crystal lattice. Zwitterions are distinguishable by their high melting temperatures and good water solubility (analogically to ionic bonds). Zwitterions take their name from the German zwitter, meaning hermaphrodite or hybrid.

In a water solution, the pH value is of vital importance. When the pH value is that of the isoelectric point (IEP = specific pH value), amino acids are present in the form of zwitterions.

If the pH value of a solution is below the IEP (acidic solution), amino acids gain a proton and become cations. The proton is gained by the N-atom of the amine group, which, as a result, becomes an ammonium group. Respectively, they form anions when the solution’s pH value is greater than that of the IEP. In this case, the greatly available hydroxide ions take a proton away from the carboxylic group. This leads to deprotonated carboxylate groups.

The graphic depiction of this pH-dependent behavior results in the titration curve of an amino acid:

The PKS and IEP values are characteristic in each case. If even more protonatable or deprotonate side chains are present, PKS3 and PKS4 values can additionally be described.

The decarboxylation of an amino acid leads to the formation of biogenic, primary amines and CO2, which undertake vital transport functions. For example, catecholamines, such as adrenaline and noradrenaline, are built from tyrosine and phenylalanine. The vital, inhibitory transmitter GABA results from glutamate. Another example is a histidine, from which histamine is built. Histamine is a hormone produced in the body’s tissues and is responsible for immediate hypersensitivity reactions.

Non-oxidative deamination (or eliminating deamination) involves the removal of water from certain amino acids. The formation of an unstable intermediate product leads to α-keto acid and ammonia.

The 3 aforementioned reactions always require PLP as a co-factor. On the other hand, the 4th typical reaction that amino acids engage in, oxidative deamination, requires water and NAD+ instead. The latter is downscaled to NADPH/H+.

As with eliminating deamination, the final products are ammonia and the corresponding α-keto acid.

Image: The peptide bond. By Lecturio

Longer chain peptides (polypeptides) are called proteins (although the boundary of the definitions is a bit blurred). 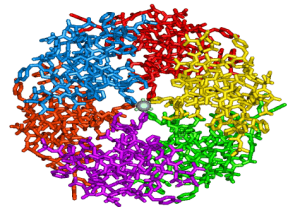 Proteins can be formed in thousands of amino acid residues.

The properties of the substituents are responsible for not only the intramolecular reactions but also the intermolecular interactions. When two amino acids are bound together in a so-called peptide bond, a dipeptide is formed; if another one is added, a tripeptide is formed.

The peptide bond is an amine linkage, in which the nucleophile amine group of amino acid 1 ‘attacks’ the carboxylic group of amino acid 2; as a result, the groups bind together. Water is released from the bond formation, which is why the reaction is called a condensation reaction.

The groups taking part in the bond are on a planar level and are characterized by mesomerism. This actually explains why hydrogen bonds are possible between the amino acids of a protein, which is a vital prerequisite for protein folding.

Image: Mesomeric structures of the peptide bond. By Lecturio

The end of a polypeptide, or protein, which has a free amine group, goes by the name N-terminus. Respectively, the end with the free carboxylic group is called C-terminus. In nomenclature, correct molecular names are produced when one reads from the N-terminus to the C-terminus, so that, if the sequence is altered, a different molecule is represented. The virtually endless number of possible combinations is calculated according to:

The overall structure of a protein can be very complex. To facilitate visualization, 4 levels are taken into consideration, illustrating a gradual ‘zoom out’ from a primary to a quaternary structure.

The primary structure of a protein includes its amino acid sequence, namely the type and succession of amino acids in the polypeptide chain (e.g., glycin-alanine-tryptophan-glutamine).

Neighboring sections of a peptide can actually interact with each other. Their spatial array is described in the secondary structure, where there are many different shapes. The most important is that of an α-helix structure, where the chain is right-hand-coiled (or simply right-handed). The coil contains 3,6 amino acids.

The inner part is formed by the main chain, whereas the side chains protrude externally in a spike-like manner. The helix structure is stabilized by intramolecular hydrogen bonds between the NH group of a peptide bond and the CO group of the 4th subsequent peptide bond (they are opposite each other in the coil). Charged side chains function rather unfavorably. Multiple helices can congregate in tangled bunches or merge in so-called coiled-coil structures.

Another type of common secondary protein structure is the β-pleated sheet, where the peptide bond is always planar and the chain follows a front-and-back zig-zag pattern. The side chains protrude interchangeably from the sheet in a downward or upward direction, which is why they must be relatively short. The distinction between parallel and anti-parallel pleated sheets is based on the direction of the N- and C-terminal ends. The anti-parallel array, in which an N-terminus is opposite a C-terminus, is definitely more stable. In contradistinction to the helix structure, intermolecular hydrogen bonds are developed here.

Peptide chains are always folded in a way that allows for the maximum number of hydrogen bonds to form.

The tertiary structure depicts the spatial structure of a complete peptide chain. One can distinguish various shapes (e.g., helix structures, pleated sheet structures, loops, unclassified/irregular sections) that are formed as a result of interactions and bonds, which are mostly developed between the side chains:

During the denaturation of proteins, their tertiary structure is always lost. The existing bonds are destroyed and new ones are formed, causing the initial protein structure to (possibly) lose its properties and functions.

Big proteins are composed not only of a polypeptide chain but also by various subunits, which together form a functional unit. Additionally, big proteins can form bonds with carbohydrates, heterocyclic compounds, and other molecules, which underlies the variety of their functions. The interactions, which were explained in the section about tertiary structure, occur again here and, this time, between the individual subunits.