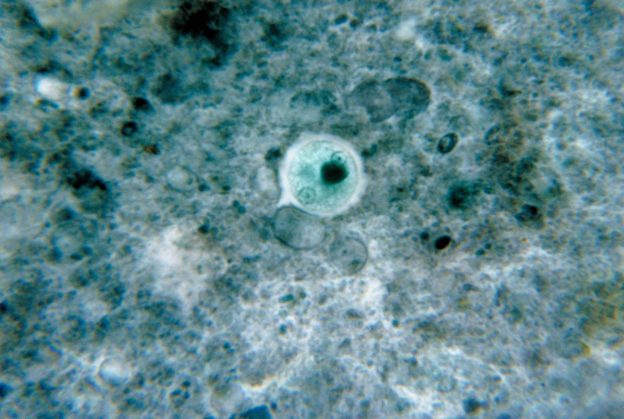 Amebiasis is an infection of the intestine caused by Entamoeba histolytica, a protozoan parasite. Humans and other non-human primates are the main hosts. Infection occurs through ingestion of water and food contaminated with feces. The contaminated food/water contains cysts of E. histolytica. It can cause extraintestinal invasive infections.

Amebiasis is highly prevalent in developing countries where general sanitation standards may not be high.

The classic symptoms of amebiasis are bloody or watery diarrhea, fever (10%–30% of patients), anorexia, and weight loss. Rectal bleeding can occur without diarrhea in children. Amebiasis remains asymptomatic in most individuals and resolves on its own. Invasive infections result when E. histolytica reaches organs such as the liver via the systemic circulation. If the infection is limited to the intestine, it is called a non-invasive infection.

Treatment is directed at disinfecting luminal trophozoites (non-invasive infection), as well as those in the tissue (invasive infection) if the infection has spread that far. Not all drugs can disinfect the cysts of E. histolytica. Drugs are usually active either in the tissues or the intestinal lumen, thereby necessitating a combination therapy for symptomatic amebiasis. Patients should be educated to avoid contaminated food/water or undercooked food.

Functional and Chemical Classification of Amebicides

Tinidazole is a 2nd-generation nitro-imidazole. Its efficacy equals that of metronidazole, but it has a shorter course of treatment (3 days vs. 10 days for metronidazole), a longer half-life (12–14 hours), and is more expensive.

Nitazoxanide is a new nitrothiazole antiparasitic drug and prodrug, which is converted to tizoxanide. It is effective against numerous intestinal protozoa and helminths.

These drugs are rarely used because of toxicity concerns; for example, severe amebiasis when metronidazole cannot be used. They act only against trophozoites, not against the cysts. In cases of severe amebiasis, these drugs should be administered subcutaneously or intramuscularly (and not intravenously) for at least 3–5 days.

Some antibiotics can be used in the treatment of intestinal amebiasis. Examples include erythromycin and tetracycline.

*Diloxanide furoate is not available in the United States.