Definition and Classification of Hypertension

Hypertension is clinically defined as a condition in which there are at least 2 elevated blood pressure readings taken separately. Currently, the most popular criteria used in the definition and classification of hypertension is the one suggested by the Joint National Committee. This is published in their series of reports, the latest being JNC 8.

Although the diagnosis is based on this classification and may predict the prognosis for the patient, they seldom give us a clear picture as to what caused hypertension to start with.

Note: Most commonly, hypertension comes about when there is an elevation in the resistance to flow in the peripheral blood vessels when the cardiac output is normal.

There is still so much to be learned about the specific failures of the components that play a key role in the maintenance of normal blood pressure, namely the autonomic nervous system, baroreceptors, the renin-angiotensin-aldosterone system, and the kidney. However, numerous studies have suggested that multifactorial abnormalities are implicated in the alteration in blood pressure maintenance.

A lot of known risk factors are associated with the pathogenesis of hypertension. Factors such as poor diet, sedentary lifestyle and comorbidities have been proven to have a direct link to the development of hypertension among persons belonging to different age groups. Moreover, non-modifiable factors such as age, heredity, and sex have been pinpointed to somehow put persons at risk for developing hypertension.

Fortunately, a lot of treatment modalities are already currently available. These modalities are also designed to fit the different classifications of hypertension, making them more effective among their target clientele.

One of the key components that regulate vascular tone is the autonomic nervous system. Adrenergic stimulation by itself modulates the blood flow resistance for a short period of time, whereas, when in combination with other components such as hormones and blood volume, it becomes a long-term modulator of blood pressure. Catecholamines that stimulate adrenergic receptors, namely norepinephrine, epinephrine, and dopamine, also play an important part in this mechanism.

Aside from the catecholamines that act as neurochemical transmitters, regulatory G proteins and second messengers such as cGMP are also involved in the activation of adrenergic receptors. These receptors are also known to be specific for the type of neurotransmitter they bind to. Moreover, they are specific for the type of response they produce once the neurotransmitter is bound to them. Because of this, they are classified into different types: α, α2,  β1, and β2.

Role of the Vascular System in the Sympathetic Nervous Response 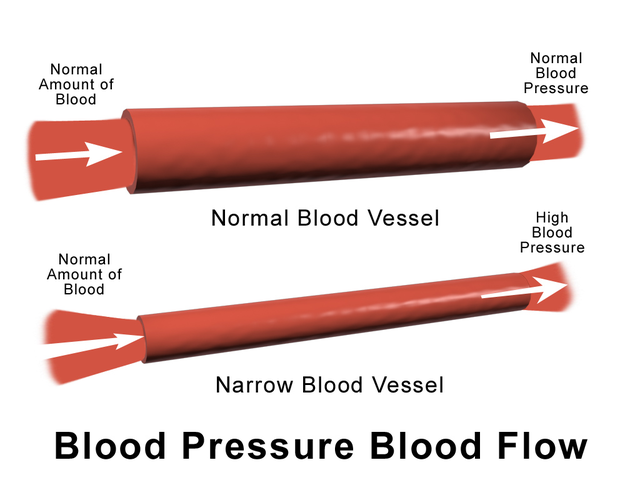 α-adrenergic receptors have more affinity and respond more to norepinephrine than epinephrine, while the opposite is the case for β-adrenergic receptors. All these receptors vary in their amount and distribution throughout the body. For instance, α1 receptors are found numerous in smooth muscle, including those surrounding the blood vessels.

If triggered by catecholamines such as when you are anxious, these receptors cause the smooth muscles to contract, leading to the narrowing of the lumen of blood vessels. This, in turn, increases the resistance to blood flow in that particular segment of the circulatory circuit, and therefore the blood pressure.

Role of the Kidneys in the Sympathetic Nervous Response

Aside from the circulatory system, α1 adrenergic receptors are also found in the kidneys. When stimulated, these receptors cause the renal tubules of the kidney to reabsorb sodium. This leads to the drawing back of water towards the tubule and a decrease in the urine output. This means that the blood volume is increased, and eventually, the blood pressure is elevated.

This mechanism, along with vasoconstriction, is thought to be a defense mechanism activated by the body during physiologic stress. In cases where a more efficient nutrient and oxygen delivery is needed by the tissues (e.g. the brain during ‘fight or flight’ situations), efficiency is achieved by increasing the velocity and volume of blood flowing through the blood vessels. This is made possible by vasoconstriction and sodium reabsorption by the kidneys.

Although belonging to the same group as α1 receptors, α2 adrenergic receptors actually manifest effects that are somewhat contradictory to that of the former. These are found in the pre-synaptic cells of the post-ganglionic nerve terminals. These terminals actually produce the catecholamine norepinephrine which is able to bind to α-adrenergic receptors. α2 receptors, however, specifically play a key role in the negative feedback mechanism in the release of this catecholamine. These act as a switch to prevent α1 receptors from going haywire.

Other receptors include the β1 and β2 adrenergic types which stimulate various smooth muscles and other tissues in the body. Here are examples of their target organs and what responses they elicit when stimulated:

Note: Overall, the stimulation of β-adrenergic receptors works in conjunction with α receptors in order to prepare the body for a ‘fight or flight’ response. This is carried out as the lungs breathe deeper and faster to improve oxygenation, redirect blood flow to more important organs such as the brain and the heart, and further improve oxygen and nutrient delivery by increasing the cardiac output.

In the management of hypertension, there are actually various choices of medications that target specific receptors. To be more particular, drugs that either agonize (sympathomimetic) or antagonize (sympatholytic) the sympathetic response brought about by these adrenergic receptors exist. 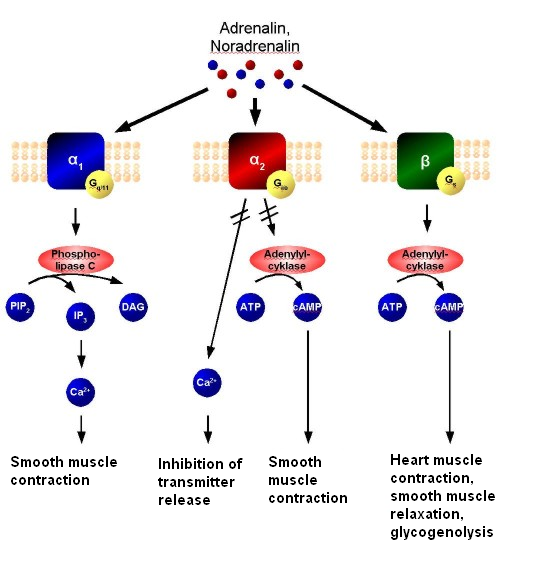 The effects of α-Adrenergic receptor blockers on the receptors are pretty much straightforward. These drugs bind to the α receptors and can remain this way either reversibly or irreversibly.

For reversibly bound drugs such as phentolamine, prazosin, and ergot derivatives, the effects depend on their actual presence in the body. This means that once the medication is totally eliminated from the circulation, effects of the medications also wane. Simply put, drugs with shorter half-lives only provide short-term effects.

Irreversibly bound drugs, on the other hand, do not have to stay in the tissues and bloodstream in order for them to present effects. These particular antagonists actually alter the receptors permanently, rendering them unresponsive to catecholamine stimulation. Medications such as phenoxybenzamine react to form compounds that permanently bind to α receptors, allowing them to maintain their effects despite their half-lives.

In order for the target organs to return to a pre-medicated state, they have to synthesize new receptors which could take a while. These drugs are actually helpful if a longer duration of effect is desired. However, this can also pose risks for patients who might need to have an active α1 response such as in cardiovascular shock, or for those who need to undergo hemodialysis.

α-adrenergic receptor blockers are somewhat popular in the pharmacologic treatment of hypertensive emergencies and in chronic hypertension. However, in most cases, α-adrenergic antagonists are used in conjunction with other antihypertensive medications in order to achieve a longer-lasting and more efficient response. 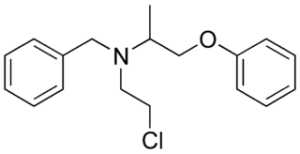 As mentioned, this drug has an irreversible binding effect on the receptors, allowing it to manifest its anti-vasoconstricting effect for up to 48 hours. This makes it the favored drug for patients who are about to undergo surgery for pheochromocytoma (adrenal medullary tumor) or for those who would like to manage the disease conservatively. It is selective for α1 receptors, but can also bind to histamine, acetylcholine, and serotonin. It is commonly taken per orem. 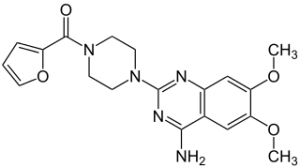 Prazosin is a very selective α1 receptor antagonist. It is known to be bound to α1 receptors 1000x more often α2, which makes it a good anti-hypertensive agent. This also explains why this drug is very popular in the treatment of benign prostatic hyperplasia, as it dilates blood vessels and relaxes smooth muscles in the prostate. It exerts its effects without causing side effects brought about by the stimulation of other adrenergic receptors such as tachycardia (α2 blockade).

Others: Terazosin and Doxazosin

Similar drugs such as terazosin and doxazosin are also developed to help maintain the blood pressure of hypertensive patients. These drugs are usually not administered as a monotherapy for hypertension. As mentioned before, this family of α receptor antagonists are reversibly bound to their target receptors and requires a sufficient amount in the circulation in order for therapeutic effects to ensue. 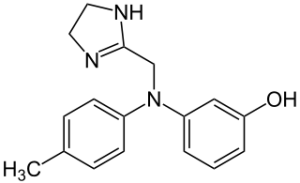 This drug competitively blocks both α adrenergic receptors. Its blocking effect on α2 receptors allows norepinephrine to stay longer in the synapses, causing side effects such as tachycardia. It is commonly used for the management of hypertensive signs and symptoms of pheochromocytoma.

Other Uses of α-Adrenergic Receptor Blockers

There is actually a more popular classification of drugs used for the control of hypertension. If used, they are usually given in conjunction with other hypertensive medications in order to achieve therapeutic effects. However, α adrenergic receptor antagonists are very common in other conditions that require local vascular relaxation, muscular relaxation and the like.

An already mentioned example is BPH which is very common among older men. In this condition, the muscular tissues composing the prostate which surrounds the urethra tenses up, causing problems with urination. With the help of medications such as α adrenergic blockers, these muscles relax and allow the urethra to maintain its patency.

Another somewhat popular use for α adrenergic blockers is in the treatment of erectile dysfunction. Since the physiology of penile erection mainly consists of the dilation of blood vessels embedded in the corpus cavernosum and corpus spongiosum, cGMP phosphodiesterase (enzyme that degrades second messengers) inhibitors such as sildenafil, has been made available to help patients maintain an erection during sexual activity. Although originally developed for blood pressure management, it has become widely available for the treatment of erectile dysfunction.