Picture: “Muscles That Position the Pectoral Girdle” by philschatz. License: CC BY 4.0

The Extrinsic Muscles of the Back: Explanations

Topographically, the muscles in this group are classed along with the lateral torso wall and upper extremity, which is due to their location as well as their genetic development based on their embryological origin.

In broad terms, the extrinsic muscles of the back are innervated by the ventral branches of the spinal nerves and individual cranial nerves.

In order to get an overview of this large group, it is crucial to divide it into subgroups. In the literature, 3 subgroups are mentioned, which are structured logically and are relatively easy to memorize. They are based on location and functional anatomy. These 3 subgroups are:

Note: Due to different specifications in different textbooks, it is recommended to always use the most up-to-date literature or flashcards in order to avoid any study restrictions.

Picture: ‘Muscles That Position the Pectoral Girdle’ by Phil Schatz. License: CC BY 4.0

Spinoscapular and spinohumeral muscles include back muscles that have their osseous origin in the trunk and extend to the scapula or humerus. They are large structures that run along the surface, and also belong to the musculature of the upper extremity.

They stabilize the shoulder girdle and influence how the torso functions when the arm is fixed. Their neuronal supply is through nerve branches of the cervicobrachial plexus, which is formed by the ventral rami of the cervical spinal nerves. Among this group are the following muscles:

The trapezius is large and flat and is the most superficial muscle of the upper back. It can be divided into 3 sections: the superior (descending part), intermediate (transverse part), and inferior (ascending part) regions. Their innervation is provided by the accessory nerve (cranial nerve XI) and the cervical plexus (C2–C4).

Note: The trapezius may additionally be innervated by segment C1. 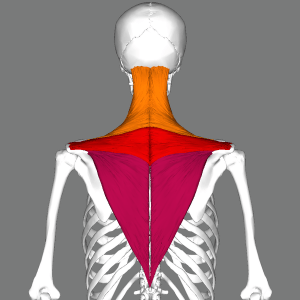 The descending part originates from the external occipital protuberance, the superior nuchal line, the nuchal ligament, and the spinous processes of segments C2 and C3. Its insertion point is at the lateral 3rd of the clavicle and the acromion. This part is responsible for extension and contralateral rotation of the head and cervical spine.

Functional note: Apart from its primary function, the descending part also moves the scapula craniomedially, which, among other things, supports the elevation of the humerus.

The transverse part has its origin at the spinous processes of C4–T1 and inserts into the upper edge of the scapular spine and the acromion. It moves the scapula medially.

The 3rd and inferior section—the ascending part—has its origin at the spinous processes of T5—T12 and inserts into the lower edge of the medial 3rd of the scapular spine. Its responsibility is the medial-caudal translation of the scapula on the thorax.

Functional note: Along with the descending part, the inferior angle of the scapula can be moved ventrolaterally.

The large rhomboid muscle has its origin from the spinous processes of 4 thoracic vertebrae (T2–T5) and inserts into the medial border of the scapula (caudal to the scapular spine). During active innervation by the dorsal scapular nerve from the C5 root of the brachial plexus, it acts as a fixator of the scapula to the thorax and performs a translational movement of the scapula in the craniomedial direction. 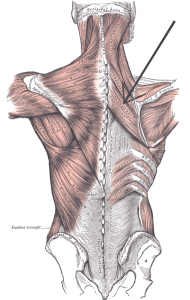 The small rhomboid muscle is located caudally from its larger counterpart and has its origin at the spinous processes of C7–T1. Its insertion is at the medial border of the scapula (caudal to the spine of the scapula) and shares innervation as well as function with the rhomboid major muscle: dorsal scapular nerve from the C5 root of the brachial plexus; and fixation and craniomedial translation of the scapula on the thorax. 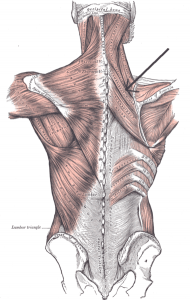 This tube-like muscle originates from the transverse processes of C1–C4 and their posterior tubercles and inserts into the superior angle of the scapula. Apart from its primary function to elevate the scapula via the craniomedial translation on the thorax, it can also affect dorsal extension and ipsilateral lateral flexion of the cervical spine. It is innervated by the dorsal scapular nerve from the C5 root of the brachial plexus and the ventral rami of cervical plexus (C3–C4). 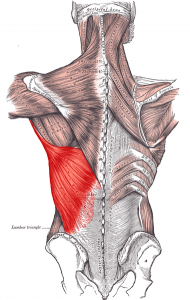 Latissimus dorsi is one of the largest back muscles. It has a very broad area of origin and a narrow insertion. It originates from the spinous processes of T7–L5, the dorsal part of the sacrum, the medial 3rd of the iliac crest, the 9th–12th ribs, the thoracolumbar fascia and, in some people, the inferior angle of the scapula.

It inserts into the crest of the lesser tubercle of the humerus and acts on the torso and the upper arm. It has humeral functions as an extensor, an adductor, and an internal rotator.

Furthermore, with regard to expiration and active coughing, it functions as an auxiliary respiratory muscle. Moreover, it can pull the entire shoulder girdle in a dorsal as well as a caudal direction. In functional anatomy, it is, therefore, often classified as part of the shoulder girdle musculature. Its neuronal supply is provided by the thoracodorsal nerve (C6–C8).

Note: It shares insertion, function, and innervation with teres major. Latissimus dorsi is extremely prominent in swimmers and, although it is well trained in these athletes regarding strength and endurance, it is often the cause of pathologies that eventually require intervention.

The spinocostal muscles are located in the middle layer between the extrinsic musculature of the extremities and the intrinsic back musculature. 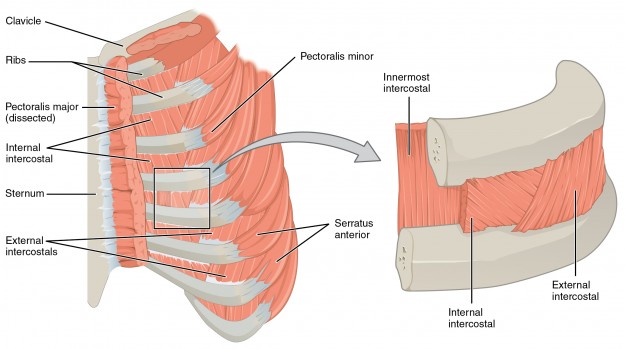 They extend from the spinous processes of the vertebral bodies to the dorsal rib sections and act as auxiliary respiratory muscles of inspiration. They are innervated by the intercostal nerves, which originate in the ventral rami of the thoracic segments. They are also classed with the lateral torso wall or—especially in the older medical literature—the primary thorax wall muscles. This group includes 2 muscles:

Serratus posterior superior originates in the spinous processes of the lower 2 cervical and upper 2 thoracic vertebrae C6–T2 and inserts into the costal angle of ribs 2–5. It is innervated by the ventral rami of the spinal nerves (T1–T4) and elevates the ribs, which makes it a synergist muscle of inspiration.

Originating from the spinous processes of the lower 2 thoracic and upper 2 lumbar vertebrae T11–L2, serratus posterior inferior inserts into the lower edge of the 9th–12th ribs. With active innervation by the ventral rami of the spinal nerves (T9–T12), serratus posterior inferior depresses the ribs, which makes it a synergist muscle of expiration.

The modified intercostal musculature is a morphological extension of the intrinsic back musculature in the deeper layers. It serves as a connection between the rib homologs of 2 consecutive segments in the extrathoracic area of the spinal column. Its movement function, however, is very limited and therefore cannot be compared with other skeletal muscles. What the intercostal muscles are to the thoracic spine, the following muscles are to the lumbar and cervical spines:

The intertransversarii muscles, as their name indicate, are present between adjacent transverse processes of the vertebrae. These muscles are innervated by the ventral rami of the spinal nerves and help in the lateral flexion of the spine.

Picture: “Posterior and Lateral Views of the Neck” by Phil Schatz. License: CC BY 4.0

Originating from the transverse process of the atlas (C1 vertebra), rectus capitis lateralis inserts into the basilar part of the occipital bone, lateral to the occipital condyle. It flexes the head laterally whenever it is actively innervated by the cervical plexus (ventral ramus C1).

Table: Overview of the extrinsic muscles of the back

You can learn everything about the intrinsic back musculature in a separate article.