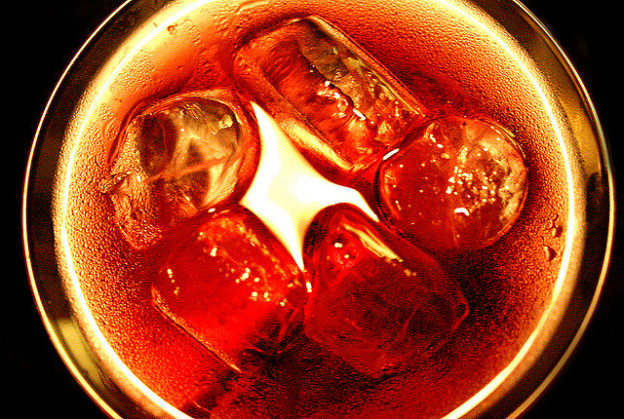 General formula: ROH
Nomenclature: The final -e of the alkane is replaced with -ol.

Compared to an alkane, alcohol has a much higher boiling point than the alkane of similar molecular weights. This is because of the different governing intermolecular forces of attraction (IMF) for the two compounds. For alkane, the major IMF present is only the London Dispersion Forces.

This is because of the compound’s non-polar nature. However, for alcohol, the -OH group helped the compound exhibit much stronger IMF in the form of hydrogen bonding. 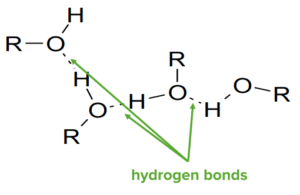 It has only 5—10 % of a covalent bond’s strength, but it has a profound effect on the boiling point and solubility of alcohols.

The cells of living things are made up of many different sorts of molecules. Two important classes of molecules are nucleic acids and proteins. Parts of these very large molecules are involved in hydrogen bonds with other parts of the same molecules. This is very important in establishing the molecules’ structures and properties. The double heliac structure of DNA, for example, is mainly due to hydrogen bonding between the base pairs. Two strands of complementary bases are bonded together through the hydrogen bond, which enables replication.

Hydrogen bonds form between backbone oxygen and amide hydrogen to form more frequently either the a-helix or the b-sheet secondary structure of proteins.

Boiling points (b.p.): more energy is needed to break the hydrogen bonds between molecules, so the b.p. is higher than in an alkane of similar M.W.

Note it is relatively soluble in water, especially for low M.W. alcohols.

Preparation of Alkyl Halides from Alcohols

Because of the inherent polarity of alcohol, this organic compound family is considered more reactive than its hydrocarbon counterpart. One of the essential reactions of alcohol is its reaction with a hydrogen halide to produce an alkyl halide and water.

The reaction kinetics also depend on the type of alcohol used in the reaction. Different alcohol types also have different reactivities. The reactivity of alcohols with hydrogen halides are shown below.

Tertiary alcohols produce high yields in less time than other alcohol types. To increase the rates of reactions for secondary and primary alcohols, the scientist usually performs the reaction at elevated temperatures.

The reaction of alcohol and a hydrogen halide is a substitution reaction. The halogen group replaces the –OH group in the structure. The reaction proceeds through three elementary steps. The first step involves the attachment of the acidic proton to the oxygen atom of the hydroxyl group. This intermediate is highly unstable. Thus, step 2 consists of the removal of a water molecule from the alkyloxonium ion, producing a carbocation intermediate. On the last step, the chloride ion attaches itself to the carbonation, producing the final alkyl halide. As an example, consider the reaction of 2-propanol and HBr at an elevated temperature.

Figure: “Reaction of 2-propanol and HBr to produce 2-bromopropane.” by Mark Xavier Bailon.

Another important reaction of alcohol is in the production of alkenes. The reaction proceeds once water is eliminated. Except for primary alcohols, reactions, just like in the other alkene preparation method, are regioselective; that is, a mixture of products will form, but one will form in a larger amount. Even though a mixture of products will form, alcohol’s dehydration reaction is stereoselective; that is, it favors the production of the most stable stereoisomer.

Alcohol dehydration is catalyzed by strong acids, like H2SO4, and heating. The reaction also requires three steps. Step 1 involves a proton from the acid attaching to the O atom of the –OH group, forming the alkoxonium ion. Step 2 involves the dehydration, or removal of a water molecule from the alkyloxonium ion, leaving a carbocation intermediate. The carbocation intermediate then participates as a strong Bronsted acid, donating one H+ to a water molecule and regenerating the original proton used up in step 1. Below is the mechanism of an alkene formation through an acid-catalyzed dehydration reaction of 3-propanol.

Alcohol is also important in the preparation of esters. Esters are compounds produced by the acid-catalyzed condensation of the alcohol and a carboxylic acid. The general reaction is reversible but favors the products when simple alcohols and carboxylic acids are used. The number of alkyl substituents of alcohol affects its reactivity in an esterification process. The more alkyl substituents, the less reactive it is to esterification for steric reasons.

The first step in the esterification process is the protonation of the carbonyl oxygen atom of the carboxylic acid. Because of the interaction between the proton and oxygen, the carbonyl carbon becomes very susceptible to a nucleophilic attack by the oxygen atom of the alcohol. The next step involves a proton transfer from the alcohol group to the –OH of the carboxylic acid. Because of the relative instability of the ion produced, water readily leaves the structure. The last step involves regenerating the proton used up in the first step. The figure below shows the general mechanism for the reaction. 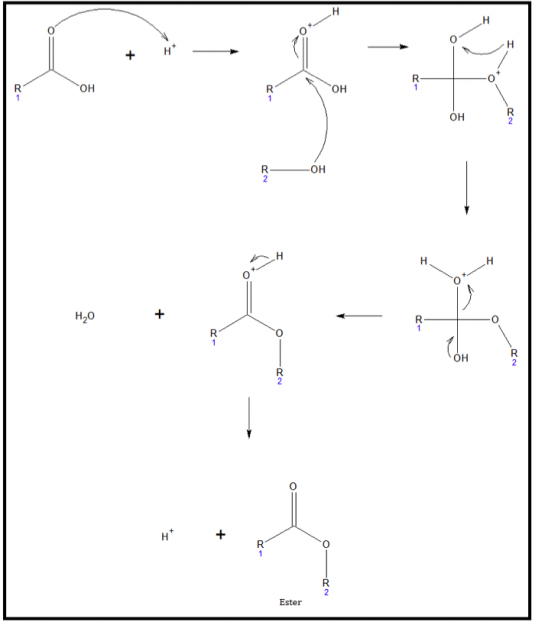 Alcohols can be converted to a carbonyl compound by reaction with an oxidizing agent. It can be converted into an aldehyde, a ketone, or a carboxylic acid. Primary alcohols may be oxidized to produce either an aldehyde or a carboxylic acid. The usual oxidizing agent for this reaction is dichromate (Cr2O72-), pyridinium chlorochromate (PCC – C5H5NH+ ClCrO3– ), C5H5NH+, and pyridinium dichromate (PDC – (C5H5NH)22+ Cr2O72-). Secondary alcohols are oxidized to ketones using the same set of reagents. Tertiary carbons cannot undergo oxidation since they lack hydrogen on their hydroxyl-bearing carbon.

In biological systems, enzymes can induce oxidation of alcohols and/or the reduction of carbonyl compounds to alcohols. For example, in the liver, ethanol may be metabolized into acetaldehyde in the presence of the enzyme alcohol dehydrogenase.

Most of the time, biological oxidation of alcohol, and the reverse process, also require the presence of a coenzyme. Coenzymes are organic compounds that work with the enzyme to bring about the chemical change in the substrate. Coenzymes have functional groups complementary to that of the substrate, and the enzyme catalyzes the redox reaction in the substrate-coenzyme complex. In the process, ethanol is oxidized, and the original coenzyme is reduced. The coenzyme used for the biological oxidation of ethanol is an oxidized form of nicotinamide adenine dinucleotide (NAD+). When the ethanol is converted to acetaldehyde, NAD+ is reduced to NADH.

Note: Alcohol oxidation is very important in organic synthesis. There are different possible products, depending on whether the alcohol is 10, 20, 30.

Sometimes we also have H ions along, so reduction also becomes the gain of H and oxidation the loss of H.