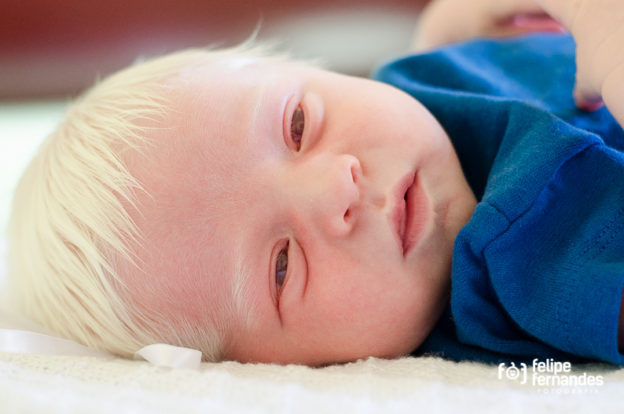 Albinism refers to a group of melanin synthesis disorders that are inherited. Patients develop a reduction or a complete absence of melanin pigment. The most common mutation associated with albinism involves the metabolic pathway that is responsible for the production of melanin from tyrosine. Albinism occurs due to genetic defects and can be passed on from one generation to another; this condition makes the body unable to produce the pigment melanin.

A special type of albinism known as the Hermansky-Pudlak syndrome is the most common cause of albinism in Puerto Rico with a prevalence of 1 in 2,700. This form of albinism is very rare in other populations.

Albinism is not associated with any significant mortality, and most affected individuals are of normal intellectual capacity. OCA and ocular albinism are associated with an increased risk of visual impairment in addition to skin photosensitivity. Individuals with albinism are also known to suffer from social anxiety due to their different appearance as compared to their peers.

OCA is common in both sexes, but ocular albinism is an X-linked recessive form of the disease that is only reported in males.

OCA types 1 and 2 are related to mutations in genes responsible for tyrosinase and P protein, respectively. These mutations are not X-linked. On the other hand, patients with ocular albinism are likely to have an X-linked form of the disease that involves the protein named OA 1.

Melanin, which is a pigment that is photosensitive, protects the skin by absorbing ultraviolet light from the sun. The absence of this photoprotective pigment is associated with a higher risk of skin damage by sun exposure. Individuals with albinism are therefore at risk of developing sunburns.

Melanin is also found in the eyes, especially in the neuroectoderm, which is responsible for the development of the outer pigmented ciliary epithelium. When melanin is absent, the fovea fails to develop normally. Additionally, the absence of melanin in the eyes was found to be associated with abnormal connections between the retina and the brain, hence abnormal visual processing can happen in those with albinism.

Individuals with albinism are thought to develop decreased visual acuity for several reasons. Firstly, increased access of light to the retina might actually result in retinal damage. Additionally, as discussed above, foveal development is impaired during early life because of the absence of melanin.

Individuals with albinism, in addition to the characteristic loss of melanin from the skin, also report ocular symptoms. Photophobia and decreased central vision due to hypoplasia of the fovea are common findings. Additionally, easy bruising, frequent nosebleeds, and prolonged bleeding after surgery or dental work are common in people with albinism. Individuals with Hermansky-Pudlak syndrome might have a family history of albinism.

African Americans affected by OCA type 2 usually have yellow hair at birth, which remains yellow throughout life. They also have white skin that does not tan.

Testing for albinism and risks involved in genetic testing

Testing for albinism is conducted on the patient’s blood sample. There are some risks involved in blood testing, such as light-headedness, bleeding, and bruising.

Individuals with a complete absence of melanin from their skin, hair, and eyes are easily diagnosed clinically with albinism. Confirmation of the diagnosis requires specific and sophisticated laboratory tests to be performed.

The determination of tyrosinase enzyme activity from the hair bulb is useful. This test can provide quantifiable information by using radiolabeled tyrosine to measure the amount of melanin produced.

Individuals who have reduced enzyme activity for tyrosinase will show an inconclusive test result, and the diagnosis cannot be ruled out. Thus, genetic testing is the only diagnostic tool that can definitively confirm the diagnosis of albinism.

Finally, individuals with albinism can have a skin biopsy performed for research purposes. Histological examination of a skin biopsy reveals the presence of macromelanosomes.

Individuals with albinism who wish to alter their hair and eye color might benefit from nitisinone, which increases plasma tyrosine levels and helps increase melanin levels in the skin, eyes, and hair of people with hereditary tyrosinemia type 1.

Patients with albinism should always take certain precautions. Shielding the eyes and skin from the sun is recommended. Patients should use a sunscreen with high sun protection factor when going out in the sun and cover themselves up with proper clothing when going out in daylight. To protect their eyes, they should wear sunglasses designed for UV protection.

Retinal detachment is a common complication in people with albinism. Retinal detachment repair surgery might be needed; unfortunately, the prognosis for restoration of normal vision is usually poor. It is postulated that vision cannot be improved with surgery in people with albinism for two main reasons: the absence of retinal pigmented epithelium and the abnormal retina-brain neural connections and cortical processing of visual stimuli.