Cells sore energy in the bonds in ATP

ATP is a purine nucleotide that has three phosphate groups connected to the 5’-carbon of the ribose ring. It is composed of the following parts: 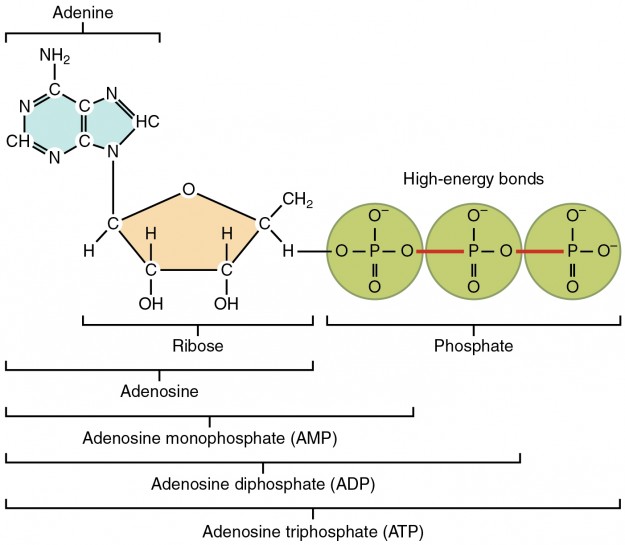 It is also possible to directly convert ATP to AMP by cleaving a pyrophosphate unit from ATP. Under the typical conditions in a human cell, however, the energy release is approximately 50 kJ/mol! 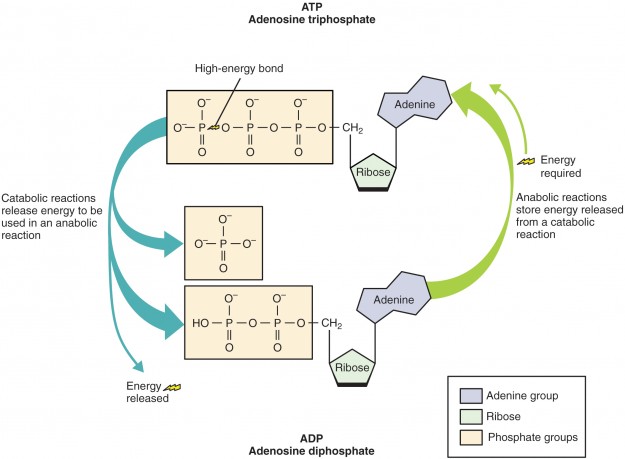 The central functional component of cellular respiration is ATP synthase, an enzyme consisting of two parts: The catalytic head part (the F1 portion) projects into the matrix of the mitochondrion and is connected to the F0 portion, which is a proton channel embedded on the inside of the mitochondrial membrane.

The energy needed for the synthesis of ATP comes from a proton gradient across the inner mitochondrial membrane, which is generated by the four preceding respiratory chain complexes (H+ concentration in the intermembrane space > H+ concentration in the matrix). Due to the gradient-directed passing of H+ ions through the F0 portion of the ATPase, the catalytic center of the F1 portion experiences a change in conformation. Bound ADP is phosphorylated to ATP.

This entire process is called oxidative phosphorylation because the energy needed to generate the proton gradient comes from the redox reactions of the four respiratory chain complexes. For these redox reactions, NADH+H+ and FADH2 are needed, which are provided by glycolysis and the citric acid cycle. 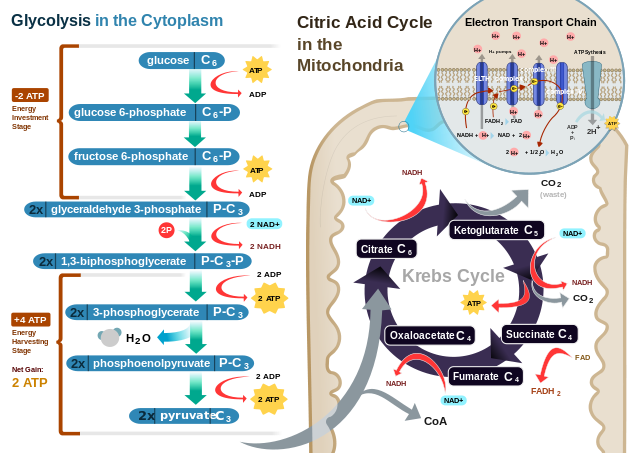 Image: ‘A diagram of cellular respiration including glycolysis, the Krebs cycle (also known as the citric acid cycle), and the electron transport chain’ by Regis Frey. License: CC BY-SA 3.0.

During glycolysis, the following reactions yield ATP from ADP:

In the citric acid cycle, GTP is synthesized from GDP. GTP is similar to ATP regarding its energy content:

In sum, one can calculate how many ATP molecules can be generated from one mole of glucose. Such a calculation is based on the assumption that one NADH yields 10 protons and one FADH2 yields 6 protons for the creation of the proton gradient of cellular respiration. For the synthesis of 1 ATP from ADP + Pi, a flow of 4 protons across the inner mitochondrial membrane is needed, meaning that 1 NADH can produce 2.5 ATP, and 1 FADH2 can produce 1.5 ATP. This results in the following high-energy compounds generated from 1 mole of glucose:

However, because 1 ATP is used by the glycerophosphate shuttle, which transports NADH from glycolysis to the cellular respiration of the mitochondria, 1 mole of glucose yields 30 moles of ATP!