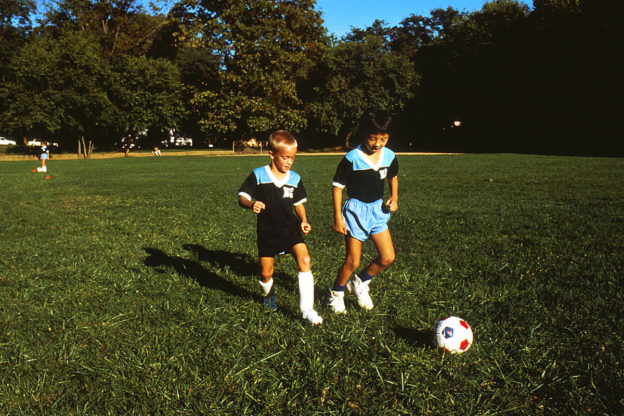 Image: “Children playing soccer.” by Bill Branson (Photographer) – This image was released by the National Cancer Institute, an agency part of the National Institutes of Health, with the ID 2464. License: Public Domain

As soon as the placental circulation stops as a result of severed umbilical cord, the glucose supply to the infant through maternal blood ends. This leads to a fall in blood glucose levels immediately after birth. An infant has a low store of glycogen and insulin and increased glucagon.

Gluconeogenesis, glycogenolysis, lipolysis, and ketogenesis replace the processes of glycogenesis and lipogenesis right after birth. This results in a metabolic switch from glucose to fat. The newborn therefore has a diet initially higher in fats and lower in carbohydrates.

The process of myelination begins in the 7th month of intrauterine life. Myelination occurs most rapidly in the first two years after birth. The structures that are necessary for reflex behavior are myelinated first. These include:

The pattern for axon myelination also follows the cephalocaudal gradient of growth. The shortest axons of the corticospinal tract are myelinated first. Upper extremities and trunk axons myelinate next. The longest axons that are present in the lower extremities are the last to myelinate. The whole process completes by 24 months of age.

The areas that myelinate first in the cerebral hemisphere are:

The frontal and temporal lobes myelinate next. The cerebrum is mostly completed regarding myelination by the end of the second year of life. However, certain interconnections of associated cortex continue to myelinate until the second and third decades of life.

The right and the left cerebral hemispheres are myelinated at different rates, the left one is almost entirely developed in early childhood, while the right one continues to grow until 11 years of age. The left hemisphere is the predominant one in earlier stages of life. This explains why children can learn languages with ease.

A newborn comes from a warm intrauterine environment to the cold outer world. Right after birth, infants are wet and naked. They have a large surface area–to–mass ratio which results in radiant heat loss.

Neonates lack the ability to shiver and hence rely upon non-shivering thermogenesis that occurs in brown fat, the adipose tissue. It has a higher concentration of mitochondria that is designed to oxidize fatty acids and generate heat rapidly. Moreover, it has high vascularity, four-to-six times that of white adipose tissue, and high innervation. Norepinephrine release stimulates metabolism for adipose tissue. The subcutaneous adipose tissue decreases with age.

Thermoregulation is a critical physiologic phenomenon influenced by prematurity, illness and environmental conditions. The temperature in newborns increases during the day reaches its maximum by the evening and is low during night time. With growth and development, surface area–to–mass ratio decreases and therefore there is a decreased heat loss in cold environment and vice versa.

There are the following circadian temperature variations:

The average sleeping time decreases with age. Neonates spend 16-17 hours per day sleeping. They can enter the REM stage of sleep cycle immediately upon falling asleep, and more than 50 percent of the sleep is REM contrary to less than 25 percent in adults. They can sleep for a duration of 4 hours at one time. Four- to five-month infants can sleep 8-to-10 hours at a time. By the age of 1 year, REM sleep drops to 40 percent.

For a child who is 2-to-5 years of age, average sleep during the day drops to 10-12 hours. It is at this age that the child begins to acquire adult sleeping patterns though they face higher arousal rates when compared to adults. REM sleep drops to 25 percent, as seen in adults. By this age, they have gained a sleep cycle of 90 to 110 minutes.

After birth, the newborn goes through various circulatory changes and changes in oxygenation. The increased oxygenation of the extra-uterine environment results in decreased erythropoietin production and subsequent decrease in erythropoiesis in the first month of life. This influences the hematopoiesis. Given below are the normal hemoglobin and hematocrit values:

The newborn acquires passive immunity from the mother. Immune factors produce IgG early and IgA, IgD, and IgE later in life. IgM is produced at birth. The table below shows the different values of immunoglobulins at various ages.

Left ventricular dominance can be seen in the first 3—6 months of life. Both left and right ventricles, however, are equal in size by the age of 6—10 months. By 7 years, the left ventricle is once again larger than the right one. This is the adult relation. There is increased P wave duration, RR interval and QRS duration on an ECG. These changes disappear by the age of 6 and after that, the ECG is similar to that of an adult.

Lung volume values in infants are usually lower than in adults. 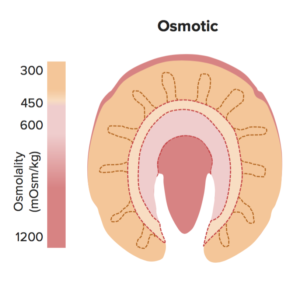 GFR at birth is low, rapidly rises over the first few weeks, and by the age of 2, it reaches adult levels. Intravascular resistance at birth is low along with systemic blood pressure. This reduces kidney perfusion. 15—20 % of the cardiac output goes to the infant’s kidney, in contrast to 25 % in adults.

Acid-base balance and other substances

Up to 2 years, potassium excretion, reabsorption of bicarbonate and H-ion buffer capacity is low. This capability increases with age. Bicarbonate levels in neonates are 18—20 mEq/L while adults have 24—26 mEq/L bicarbonate. The adult level is reached within the first year of life. Fractional excretion of sodium (FENa) is as high as 5 % immediately after birth, contrary to 1 % in the adult.

Kidney maturation occurs rapidly in the first 6 months and is slower after that. Despite that it reaches adult maturation level in 2 years, children are more prone to injuries due to lower adaptation capacities.

Serum creatinine is an index of renal function in neonates and children. Its concentration is highest at birth with a rapid drop in the first 2 weeks. It stabilizes at 0.3—0.4 mg/dl in infancy. Little changes occur in the first 2 years of life, and after that, the serum creatinine level increases with increased muscle mass.

Fetal Physiology and the Transition to Extrauterine Life. via ncbi.nlm.nih.gov