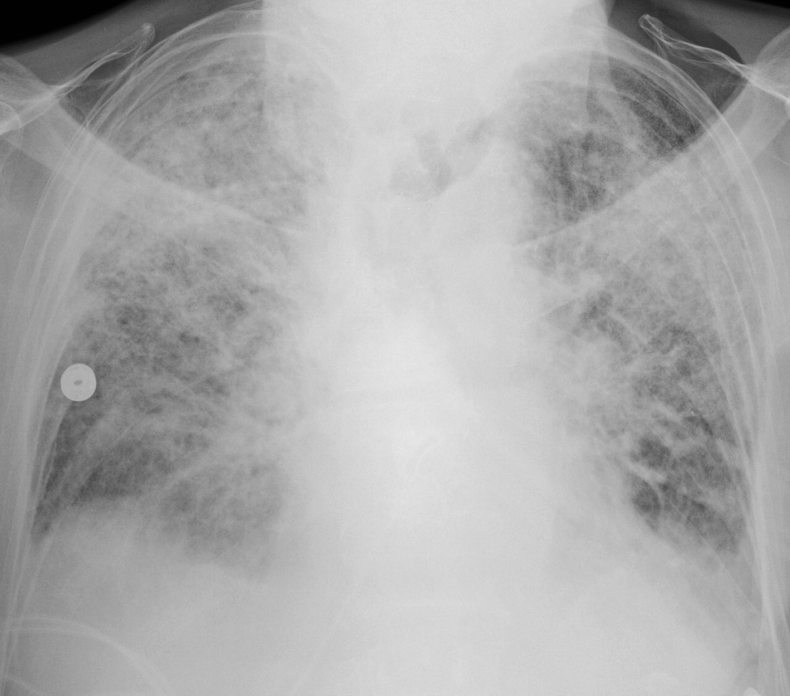 ARDS is considered the most common cause of non-cardiogenic pulmonary edema. It is clinically defined by the presence of pulmonary infiltrates due to alveolar fluid accumulation, without evidence suggestive of a cardiogenic etiology. 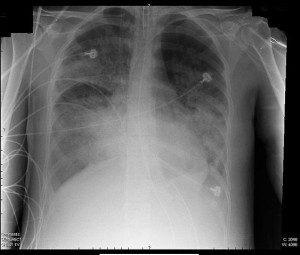 Image: Chest X-ray of a patient with ARDS. By Samir, License: CC BY-SA 3.0

Therefore, the main cause of pulmonary edema in ARDS is the damage to the alveolar-capillary membrane, which becomes leaky, allowing fluid rich in protein to exit into the interstitial and alveolar spaces. This leads to reduced diffusing capacity, shortness of breath, and hypoxemia.

ARDS can be caused by a variety of etiologies, but the clinical manifestations are the same once the alveolar-capillary membrane has been damaged.

ARDS is mostly caused by sepsis

Sepsis is considered the most common cause of ARDS and should be suspected in any patient predisposed to severe and serious infections. Other common causes of ARDS are listed in the table below.

There are 2 main extravascular spaces in the lungs:

The alveolar-capillary membrane prevents the exudation of fluid into these 2 spaces:

The alveolar epithelium is impermeable to protein. Therefore, the edema fluid doesn’t enter the alveolar space and causes an osmotic gradient that forces the fluid to accumulate in the interstitium.

The high-protein fluid inside the alveoli causes inactivation of the surfactant, resulting in a large increase in the surface tension of the alveoli. This leads to reduced lung compliance, alveolar instability and ultimately, areas of atelectasis. Consequently, intrapulmonary shunting and hypoxemia occur, and the work of breathing increases, leading to dyspnea.

Alveolar microvascular occlusion results in a reduction of pulmonary arterial blood flow to the ventilated portions of the lung and increase the dead space, leading to pulmonary hypertension. Increased pulmonary dead space ultimately leads to hypercapnia, in addition to hypoxemia.

Pathology and Clinical Manifestations of ARDS

The clinical features depend on the pathological changes of ARDS, which encompass 3 phases: exudative, proliferative, and fibrotic.

The respiratory symptoms of ARDS usually start within 6–72 hours after an eliciting risk factor and progress rapidly. 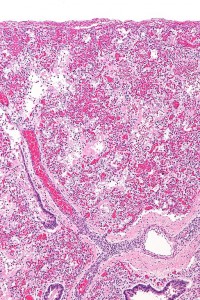 The exudative phase is characterized by the destruction of type 1 alveolar cells and the capillary endothelial cells. This results in the loss of the tight junctions that prevent the movement of fluid and macromolecules into the alveoli. It leads to aggregation of fluid, plasma proteins, and cellular debris into the alveoli, together with dysfunction of the pulmonary surfactant. These pathological changes ultimately lead to the formation of hyaline membrane whorls.

Clinical findings related to the precipitating factors may also exist, for example, fever and hypotension in the patient with sepsis.

Chest X-ray is not specific and typically shows bilateral alveolar infiltrates at least 3/4ths of the lung fields, that are indistinguishable from cardiogenic edema.

Arterial Blood Gas (ABG) typically shows hypoxemia and may be accompanied by acute respiratory alkalosis due to the associated tachypnea.

It usually lasts from 7–21 days. Many patients will recover within 3–4 weeks after the initial lung injury.

This phase is characterized by the beginning stages of lung repair and resolution of the pathophysiological changes (reparative process). Alveolar cells type 2 start to proliferate along the alveolar basement membranes and produce new pulmonary surfactant.

Although patients start to recover rapidly during this phase, they may still experience dyspnea, tachypnea, and hypoxemia. Some patients develop early progressive fibrosis, which is associated with an increased risk of death.

The inflammatory exudates are converted into an extensive alveolar duct and interstitial fibrosis. Intimal fibrosis of pulmonary vessels leads to progressive vascular occlusion and pulmonary hypertension.

Many patients will develop lung fibrosis that may require long-term mechanical ventilation and oxygen supply. This phase is associated with appreciable mortality.

Therefore, evaluating a patient suspected to have ARDS is aimed at:

Clinically, it can be excluded by the absence of:

Once cardiogenic pulmonary edema has been excluded, other less common alternative diagnoses must be considered:

The Berlin diagnostic criteria of ARDS:

Identifying the specific cause of ARDS

Treatable causes of ARDS should be identified once the diagnosis has been established, either by the clinical context or by performing additional diagnostic tests.

Patients with ARDS are treated in the hospital, preferably in an intensive care unit (ICU). The management of ARDS is supportive, focused on improvement of oxygenation and directed at the underlying cause.

Left atrial filling pressure should be reduced with fluid restriction and diuretics to decrease the pulmonary edema and prevent further decrements in arterial oxygenation.

Patients are catabolic and will benefit from enteral feedings.

Current evidence does not support the routine use of glucocorticoids in the treatment of ARDS.

Nosocomial pneumonia frequently complicates ARDS and can be associated with increased morbidity in these patients.

Microbiological assessment of the offending organisms is important in order to choose an initial antibiotic regimen since delayed or inappropriate treatment is associated with a poor outcome.

Patients with prolonged mechanical ventilation are at risk of the gastrointestinal tract (GIT) bleeding, and prophylaxis against stress ulcers should be provided.

The risk of DVT and pulmonary embolism is high in patients with ARDS due to prolonged immobility.

Prognosis and outcome of ARDS

ARDS is a serious condition that is usually associated with high mortality and morbidity. Although the mortality rate of patients with ARDS is high and ranges from 26–44%, the majority of patients recover the maximum function of their lungs within 6 months.

It has been demonstrated that non-pulmonary causes of ARDS, such as sepsis and non-pulmonary organ failure, account for more than 80% cases of death.

Several risk factors have been identified to estimate the prognosis in a patient with ARDS: