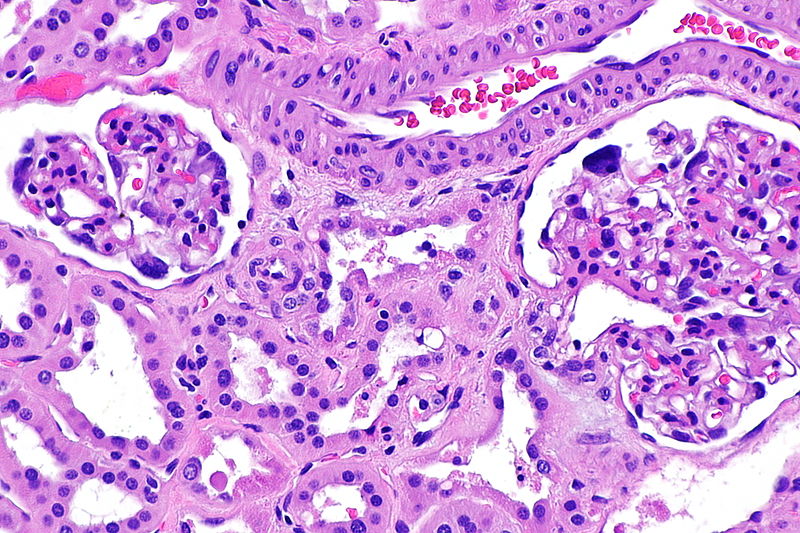 According to the Kidney Disease Improving Global Outcomes (KDIGO) guideline, ARI is defined by 1 of the following 3 criteria:

Although oliguria or anuria is considered the preeminent symptom of ARI, many patients also present with polyuria or normuria (see below). In these cases, the measurement of creatinine serum levels over the course of the illness may provide the only indication of ARI.

Acute renal insult is a relatively common disease, with an incidence of 2,000 to 3,000 per million inhabitants. Older people and toddlers are particularly susceptible, as they can dehydrate quickly when experiencing acute water loss (e.g., due to infections or heavy sweating). Patients in intensive care can also develop the disease, as kidney problems in this unit are frequent; approximately 5% of all intensive care patients suffer from ARI.

Because of various pathophysiologic processes, kidney function can diminish rapidly. As a consequence, uremic substances accumulate and alter water, electrolyte, and acid-base balances. Usually, this loss of function is reversible, as long as the underlying cause or structural processes do not become chronic.

Etiologically, ARI can be subdivided into 3 types. Each type encompasses different pathophysiological processes, so understanding the type of ARI presenting in a patient is crucial to identifying the choice of treatment:

Prerenal ARI (About 60% of all cases)

Prerenal ARI is the result of reduced renal perfusion, with the glomerular and tubular structures initially being completely intact. It may be caused by actual hypovolemia (e.g., due to exsiccosis, diarrhea, or pancreatitis), but also relative hypovolemia stemming from, e.g., cardiac insufficiency, shock, or sepsis. Prerenal ARI may lead to a reduction in renal perfusion. Diseases that cause renal vasoconstriction may also result in prerenal failure. Hepatorenal syndrome is evident.

Through the regulation mechanisms of the kidney, reduced perfusion activates the renin-angiotensin-aldosterone system (RAAS). At the same time, the body experiences a release of catecholamine and ADH. This reaction is vasoconstriction with simultaneous retention of sodium and water in order to compensate for the hypovolemic condition.

In the case of exsiccosis, these reactions are appropriate. However, in the presence of cardiac insufficiency, actual reduced perfusion does not involve a lack of water. Clinically, signs of hyperhydration predominate. The activation of RAAS erroneously increases the intracorporeal water concentration and hyperhydration increases. If diuretics are administered in this situation, renal perfusion will be reduced even more, increasing the risk of ischemia and intrinsic renal failure.

Intrinsic Renal Insult (About 35% of All Cases)

Acute damage to the glomeruli or tubular cells leads to structural damage of the kidney itself. Usually, acute tubular necrosis brought about by, e.g., different (micro- and macroangiopathic) ischemic processes such as thromboembolism or thrombotic microangiopathy will occur. Glomerulonephritides may also lead to reduced kidney function.

Toxic damage, especially iatrogenic damages, are frequent. Contrast agents or other medications play an important role here. In addition, myoglobinuria due to rhabdomyolysis, hemoglobinuria due to hemolysis, or uric acid salts due to gout or tumor lysis are potential causes.

The renal tubules are responsible for reabsorption. If an intrinsic renal dysfunction affects the tubules, this may cause severe polyuria as part of ARI.

If sodium reabsorption is diminished because of damage to the tubular cells, the tubuloglomerular feedback mechanism causes constriction of the afferent glomerular arteriole. This, in turn, leads to a reduction in the glomerular filtration rate.

Postrenal Insult (about 5% of All Cases)

Any disease with the potential to impair the drainage of urine from the kidneys can lead to urinary retention with subsequent postrenal failure. Congenital malformations of the urinary tract should be excluded as a cause, as should various acquired urinary obstructions including tumors, gynecological conditions, urinary catheters, outflow obstructions due to medication, prostate enlargement, and ureteric stones.

The clinical manifestations of ARI are very diverse and largely depend on a persistent underlying disease. The clinical course of the disease can be divided into 3 stages:

Depending on what is causing the ARI, side pain, fever, fatigue, and symptoms relating to complications (see below) may also be present. 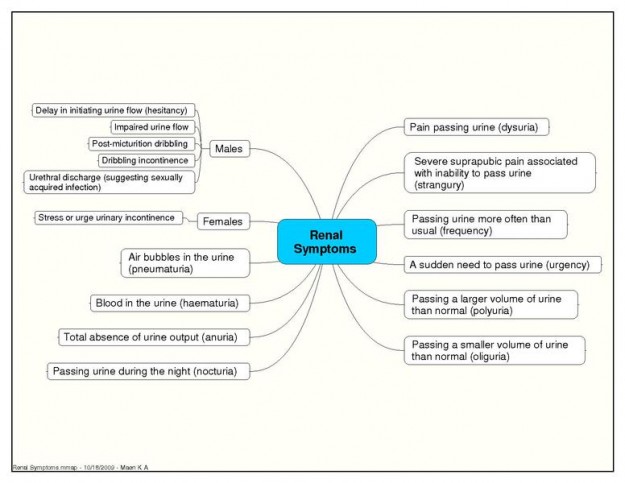 Complications are due to the above-noted pathophysiological processes. Many organ systems may be affected:

Diagnosis of ARI is based on a focused medical history with a corresponding clinical presentation and determination of the diuretic level. Laboratory tests should include urinalysis. Retention parameters can be measured in the blood, especially electrolyte concentrations, which should be checked regularly. Depending on the underlying condition, lab tests can provide valuable information.

Other Examination Methods for ARI

For a definitive diagnosis of glomerulonephritis, a percutaneous kidney biopsy is indispensable.

An important differential diagnosis is a functional oliguria. This disorder may occur after a long period of time without water and is usually accompanied by a barely increased creatinine level; functional oliguria can eventually lead to ARI.

Substitution of Fluids and Electrolytes for ARI of Prerenal Genesis

In prerenal ARI, kidney function can only recover when the underlying pathophysiological mechanism has been eliminated. Nephrotoxic substances should be avoided, and fluid and electrolyte balances must be thoroughly controlled and treated.

The reason for the hypoperfusion must be uncovered and then treated. The administration of fluids and electrolytes is a prudent option. Loop diuretics can also be helpful in maintaining diuresis. (Note that while this medication measurably increases diuresis, it does not increase glomerular filtration or have any impact on the recovery of kidney function.)

Immunosuppressive Therapy and Revascularization for ARI of Intrinsic Genesis

In intrinsic ARI, it is important to first treat the underlying disease. Immunosuppressive treatment is advisable for glomerulonephritis, and revascularization for ischemia.

For raising diuresis, loop diuretics can be administered; however, the use of diuretics is controversial and therefore not generally recommended. The only absolute indication for the administration of diuretics is hyperhydration.

Treatment of ARI of Postrenal Genesis

In cases of postrenal ARI, it is imperative to remove the urinary obstruction. If this is not immediately possible, the surgical insertion of an artificial excretory opening (percutaneous nephrostomy) is indicated.

Extracorporeal treatment with hemodialysis or hemofiltration for electrolyte imbalances, water overloads, or acid-base imbalances can also be attempted. This type of renal replacement therapy should be considered only as a temporary measure and limited accordingly. If kidney function cannot be restored sufficiently, permanent dialysis may become necessary. 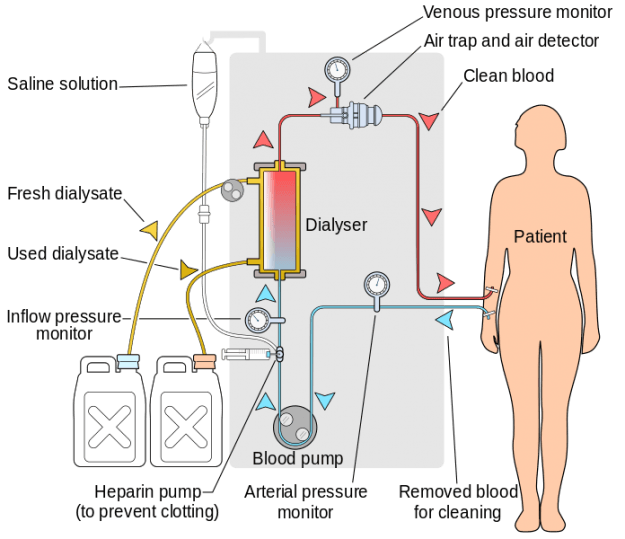 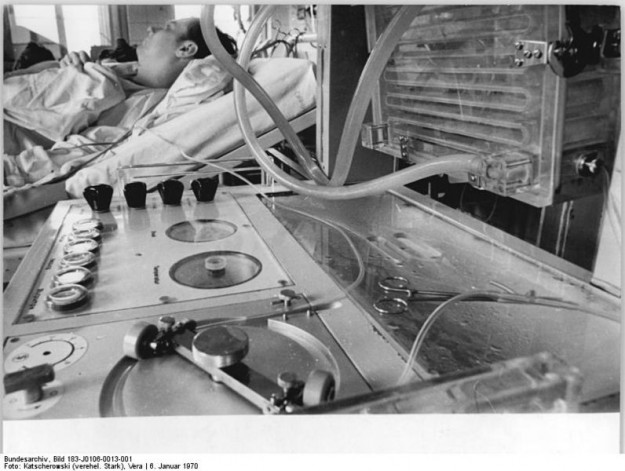 Despite the progress that has been made in treating ARI in intensive care units, it is a dangerous disease with a high mortality rate, at approximately 60%. This high rate can often be explained by a serious underlying disease or, sometimes, severe and systemic complications.