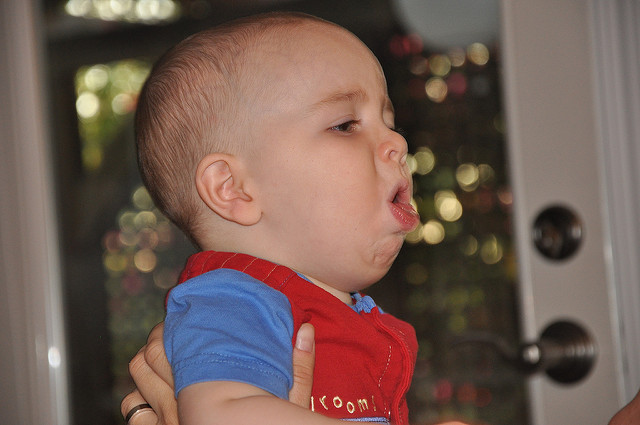 Acute bronchitis is an acute inflammation of the mucous membrane of the bronchi. Due to its pathogenesis, acute bronchitis is frequently accompanied by an upper respiratory tract infection. Cases where the trachea is also involved are referred to as tracheobronchitis. Bronchitis can be infectious or irritative acute, depending on the cause.

Acute bronchitis is a very common disease. It occurs frequently during the winter months and affects both genders equally. Children and adolescents are more prone to developing acute bronchitis than adults.

Because it is so common, diagnosis is often made prematurely or too quickly in the absence of laboratory parameters that could point practitioners in the right direction. Not every cough that accompanies an upper respiratory tract infection is caused by an inflammation of the mucous membrane of the bronchi.

Viruses are the most common cause

In most cases, acute bronchitis is preceded by an upper respiratory tract infection. Approximately 90% of all cases of acute bronchitis are caused by viruses. Other pathogenic agents such as bacteria, fungi, or chemical irritants are rarely the primary cause of this disease.

As a rule, the inflammation is caused by individual pathogens such as myxoviruses (influenza viruses or parainfluenza viruses), which are transmitted via droplets (through coughing).

Other viruses include the adenovirus, coxsackievirus, and echovirus. The most common virus in children is the respiratory syncytial virus (RSV).

Upon entering the system, the viruses make their way through the mouth or the nose and throat area via the trachea into the primary bronchi. Once there, they attack the cells of the mucous membrane of the bronchi and impair ciliary function. Mucus and pathogens are then removed from the bronchi more slowly or to a lesser extent than usual, leading to increased mucus production. This results in mucus accumulation, which, in turn, leads to an irritation of the sensors along the airway, prompting cough.

Coughing in the context of acute bronchitis is considered to be the body’s reaction to the expectoration of mucus—that is, a typical cough with acute bronchitis represents a fallback mechanism to ensure mucociliary clearance that is no longer provided by the cilia under attack. 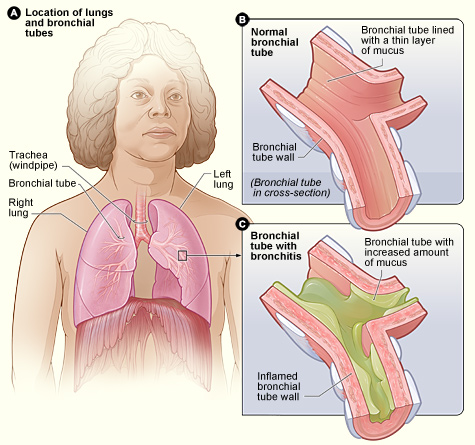 Viral acute bronchitis turning into a secondary superinfection due to bacteria

The most common bacterial pathogens of acute bronchitis are:

Acute bronchitis may also be caused by noxious agents that are not infectious in nature; these are referred to as irritative causes. In many cases, these include inhaled vapors or gases, but also smoke. Foreign body aspiration may also cause acute bronchitis.

Another important noninfectious cause of acute bronchitis is so-called congestive bronchitis, which results from advanced left ventricular insufficiency.

As a rule, acute bronchitis is noticeable from 1 to a few days after an individual has become infected. The incubation period is strongly dependent on the pathogen, however. Viruses have a relatively short incubation period, whereas bacterial pathogens take longer to incubate.

The first signs of acute bronchitis include flu-like symptoms such as fever and fatigue, as well as upper respiratory tract complaints. Bronchial symptoms generally manifest only after the bronchi have become infected.

Other symptoms that are caused by a viral infection with bronchial involvement include:

Symptoms during the progression of uncomplicated acute bronchitis

A few days after the disease takes hold, the dry cough usually turns into a productive cough with thick, mostly clear discharge. A cough may, however, remain dry over the entire progression of the disease.

The key symptoms of bronchitis are:

As a rule, uncomplicated acute bronchitis heals within 1–3 weeks without further complications or any after-effects.

Acute bronchitis may be complicated by bacterial superinfection. The key symptoms for an existing bacterial secondary infection are an acute, often nagging, dry cough, and yellow or, sometimes, green discharge. Тhis discharge is not present in a purely viral infection. In addition, there are significantly pronounced breathing sounds such as wheezing and rattling and, in some cases, dyspnea and expiratory stridor. Should any of these symptoms exist, the probability of obstructive or spastic bronchitis is high.

Uncomplicated acute bronchitis is usually diagnosed by reviewing the patient’s medical history and performing a physical examination. Laboratory tests are only required in rare cases.

The patient’s medical history and physical examination will show the following:

If the patient’s medical history and clinical signs do not lead to a clear diagnosis, the following diagnostic procedures should be considered:

Note: As a rule, diagnosis is made via the patient’s history and physical examination.

Close attention should be paid to cases of recurrent bronchitis, as these may point toward chronic bronchitis but also toward diminished immunological defense. Further considerations regarding differential diagnoses should include the following:

If the disease progresses without complications, only the symptoms should be treated and antibiotic pharmaceuticals should not be prescribed.

Symptomatic treatment should include secretolytic therapy, such as avoiding the inhalation of noxious agents such as cigarette smoke and, if necessary, administering antitussive agents such as codeine or noscapine. In cases of increased, simultaneous flu-like symptoms, analgesics and antipyretics may also be administered.

In cases of bacterial superinfection with protracted progression or fever, or purulent, yellowish or green sputum, antibiotics should be administered. A more targeted approach includes pathogen detection and an antibiogram.

Note: In most cases, treatment is symptomatic.

Acute bronchitis usually spontaneously heals after 1 week without any complications. In most cases of protracted progression with bacterial involvement, acute symptoms do not last longer than 2–3 weeks. The cough may extend past the acute stage, however, and last some time longer due to existing bronchial hyperreactivity.

While the progression of acute bronchitis is, in most cases, uncomplicated and does not pose any health consequences, it can sometimes turn into a more serious disease with consequences for at-risk patients, including:

Diseases in children such as measles, pertussis, and mumps may also cause acute bronchitis. As the lower respiratory tract in babies, infants, and children has not yet fully developed, a viral infection of the bronchial area can quickly lead to an inflammation of the bronchioles (bronchiolitis). In severe cases, this may lead to massive obstruction of the lower airways.