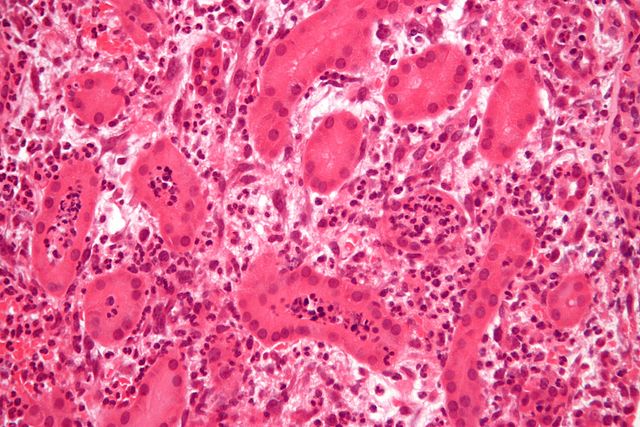 The prevalence of acute pyelonephritis is to be 15–17 cases per 10,000 females and 3–4 cases per 10,000 males in the United States. It is more common in pregnant females diagnosed with asymptomatic bacteriuria.

Chronic pyelonephritis is common in children and is associated with vesicoureteral reflux disease.

Pyelonephritis has no racial predilection, and its distribution indicates that it is more common in the extremes of age with 2 peaks; 1 at 0–4 years and the other at > 65 years.

Acute pyelonephritis: is a medical emergency. If untreated, it can progress to an abscess, sepsis, and organ failure. Urinary tract infections (UTIs) due to Escherichia coli, Proteus mirabilis, or Klebsiella are associated with an increased risk by ascending the ureters. Hematogenous infection is usually due to staphylococcus aureus. 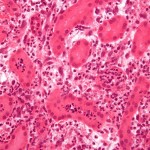 E. coli, Proteus, and Pseudomonas are the typical organisms associated with urinary tract infections. E. coli is the most common organism involved in acute pyelonephritis. The routes of infection are either hematogenous or an ascending infection.

Ascending infection with E. coli is by far the most common cause of acute pyelonephritis.

Hematogenous spread is usually uncommon. It occurs due to staphylococcus and E. coli infection. It results in the seeding of the bacteria in the kidney, which can result in pyelonephritis.

The causes of pyelonephritis include:

Lower urinary tract obstruction is the predominant cause of chronic pyelonephritis, which can be due to benign prostatic hyperplasia and renal calculus.

This is a rare, acute, and necrotizing form of pyelonephritis that occurs in diabetic or immunocompromised patients. EP is also associated with urinary tract obstructions. It is typically caused by E. coli or K. pneumoniae, and is characterized by an accumulation of gas in the renal parenchyma, collecting system, or perinephric tissue viewed using a CT scan or ultrasound. The patient will present with acute renal failure, micro- or macroscopic hematuria, and severe proteinuria. Prognosis is poor in emphysematous pyelonephritis because of septic complications.

This is a chronic inflammatory disorder of the kidney characterized by the destruction of the renal parenchyma by the growth of granulomatous mass. Chronic infection associated with urinary tract obstruction (usually by staghorn calculi) results in suppurative infection of the kidney. It is typically caused by Proteus, E. coli, or Pseudomonas. Histopathological changes show infiltration by lipid-laden macrophages and the presence of large, irregular, yellow-orange masses which can be confused for true renal neoplasms. 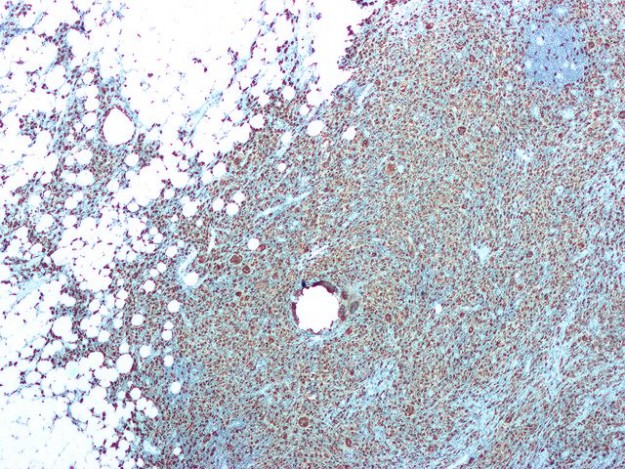 Image: “CD68 immunohistochemical staining of macrophages and giant cells in a case of xanthogranulomatous pyelonephritis.” by Nephron. License: CC BY-SA 3.0

The classic triad of symptoms of acute uncomplicated pyelonephritis is:

It is usually associated with symptoms of cystitis, which include increased frequency, urgency, dysuria, and suprapubic tenderness.

A past history of acute pyelonephritis is usually present. Chronic and recurrent infections can predispose children to hypertension. In children, symptoms such as fever, lethargy, flank pain, and nausea may be present.

Overview of sign and symptoms of pyelonephritis and perinephric abscess

This condition is characterized by a focal abscess formation in the cortex and medulla. The lower pole of the kidney is relatively spared; renal tubules show characteristic microabscess.

Scarring of the glomeruli and tubular atrophy are characteristic of chronic pyelonephritis. There is an increased eosinophilic substance in the tubules (due to atrophy). This characteristically resembles the thyroid tissue on histopathological examination. This process of depositing an eosinophilic substance in the tubule is called thyroidization.

Preventing reflux uropathy in childhood forms the cornerstone of managing chronic pyelonephritis. It might require surgical correction depending on the grade of the vesicoureteric reflex. Almost all VUR cases should begin treatment with medical therapy. Hypertension should be treated with angiotensin receptor blockers.