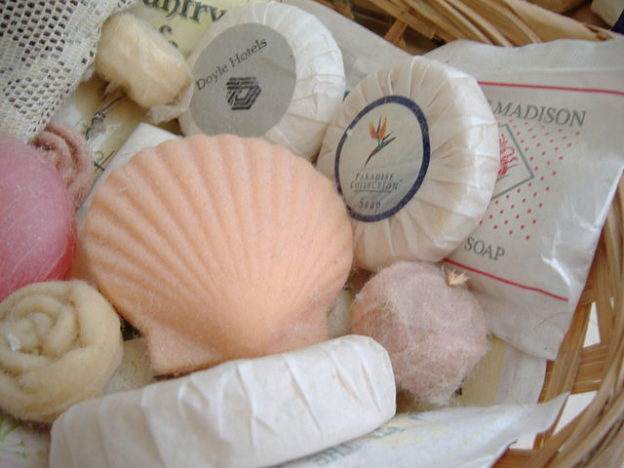 Image : “Soaps are weak bases formed by the reaction of fatty acids with sodium hydroxide or potassium hydroxide” by Phanton. License: Public Domain

When an acid (AH) reacts with a base (B), the H+ is transferred. Water is an amphoteric molecule that can act as an acid or a base.

Because most acid/base reactions occur in water, generally water is not included in the equations:

The 3 operational definitions of acids and bases include the Arrhenius, Bronsted-Lowry, and Lewis definitions.

Bronsted-Lowry defines an acid as a proton donor and a base as a proton acceptor. Water molecules donate and accept a proton, and not only participate as a solvent, but also as a reactant.

The Bronsted-Lowry definition does not explain the acidity of metal cations. Therefore, the Lewis definition was developed, which focuses on the electrons of atoms involved in a reaction.

An appropriate example is Al(OH)3, which is considered an amphoteric substance. Amphoteric substances are compounds that act as acids or bases. The aluminum atom in the structure, carrying only 6 electrons, can still accommodate an electron pair so the aluminum atom can act as an acid. The oxygen atom has electron pairs to donate, and therefore acts as a base in a reaction.

Many reactions are reversible, e.g.,

The reaction is shortened as follows:

With time, the speed of the forward reaction is the same as the reverse reaction. The concentrations of the reactants and the products remain stable under equilibrium.

The acid dissociation constant is Ka.

If K is large, HA will nearly be completely dissociated to yield a large number of [H+] ions. Such acids are described as strong acids, e.g., H2SO4, HCI, and HNO3.

Similar to acids, the strength of the base is determined by the equilibrium constant (Kb) in the above reaction, which also facilitates the determination of the pKb. Generally, base strength is represented by the pKa depending on the reaction of the conjugate acid.

Strengths of Acids and Bases

Strong acids include hydrohalic acids, such as HCl, HBr, and HI. Oxoacids are those in which the number of O atoms exceeds the number of ionizable protons by 2 or more, such as H2SO4, HNO3, and HClO4.

Water-soluble compounds containing O2- or OH– ions are strong bases. Generally, strong bases include the cations of the most active metals:

Many compounds with an electron-rich nitrogen atom are weak bases (none are Arrhenius bases). The structure generally contains an N-atom with a lone electron pair:

The addition of an acid or a base to water [H+] alters the acidity of a solution, which is expressed by the pH value: pH = -log [H+].

The value obtained is valid if the percent of dissociation of the compound is ≤ 5%.

Note: HNO3 is a strong acid and so complete ionization occurs. This means for every mole of HNO3, one mole of H3O+ is produced.

Note: Ca(OH)2 is a strong base and so complete ionization occurs. This means for every mole of Ca(OH)2, 2 moles of OH– is produced.

Note: CH3COOH is a weak acid, and so incomplete ionization occurs. This means not all of CH3COOH is converted to its conjugate base. Since a reversible reaction is involved, equilibrium may be established, and so the ICE method may be used.

Note: Use the quadratic equation to solve for x.

Buffers are solutions that resist pH changes because the buffer solution is saturated with acidic and basic ions that can readily react with an added base or acid, respectively. A primary requirement to produce a buffer solution is that the acidic and basic components of the buffer system must not neutralize each other, which can only be achieved using a weak acid or base with the conjugate. For example, if an acetic acid-acetate buffer is considered, the two components do not neutralize each other.

The efficiency of a buffer to resist pH changes is known as the buffer capacity. The buffer capacity is formally defined as the amount of strong acid or base, in gram-equivalents, that must be added to 1 liter of a solution to change the pH by one unit.

One common example of a buffer solution is human blood. Human blood samples maintain a pH of 7.4. Significant changes in the pH of blood may cause conditions, such as acidosis (pH < 7.4) or alkalosis (pH > 7.4). Buffer solutions are important in humans because specific metabolic reactions only occur at some pH values of the solution.

Water has no buffering capacity:

Note: A buffered solution maintains the pH within a few hundredths of a pH unit after the addition of similar amounts of acid or base.
Learn. Apply. Retain.
Your path to achieve medical excellence.
Study for medical school and boards with Lecturio.
References