Acid Base Balance and the pH of Blood | Online Medical Library 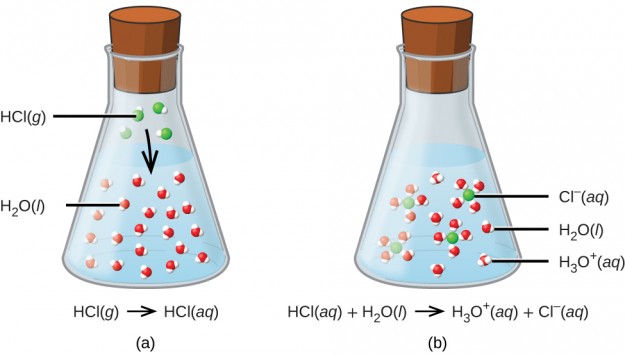 Thus, large changes in pH, such as in the GI system, require 10 fold changes in hydrogen concentration. 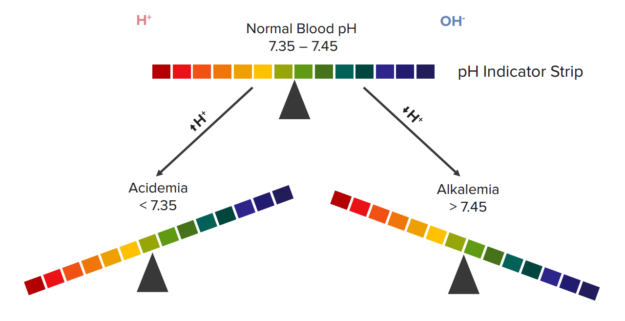 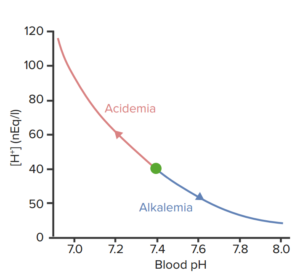 An acid is defined as a compound that dissociates in water and gives away its hydrogen ions. Bases are compounds that can accept hydrogen ions or gives away hydroxide ions or other negatively charged ions.

Acid solutions contain hydrogen ions. The higher the concentration of hydrogen ions, the lower is the pH. Hydrochloric acid is a strong acid and ethanoic acid is a weak acid. Strong acids are fully ionized but weak acids are only partly ionized in solution. Similarly, a weak base is a chemical base that does not ionize fully in an aqueous solution. A weak base may also be defined as a chemical base in which protonation (the addition of an (H+) to an atom, molecule, or ion, forming the conjugate acid) is incomplete.

Bases are proton acceptors. Accepting protons results in a relatively low pH compared to strong bases. Bases range from a pH of greater than 7 (7 is neutral, like pure water) to 14 (though some bases are greater than 14). The formula for pH is:

Buffers are chemical substances that minimize changes in pH when an acid or a base is added to a reaction by absorbing excess H+or OH– ions. In the absence of a buffer, a minor change in H+ ion concentration can lead to a dramatic change in the pH. Buffers prevent large changes in pH by reacting with the newly generated H+ ions and neutralizing them:

The main role of buffers is to maintain a constant pH. A buffer is composed of a weak acid and its conjugate base, or a weak base and its conjugate acid. Weak acids and bases that are 50% dissociated (i.e., equally into HA and A−) are known to be the best buffers. The pH at which these compounds are 50% dissociated is called the pK, or ionization constant. The best buffers for the human body are those that have a pK close to 7.40; these include the physiological buffers of the human body. If pH < pK of a buffer then HA > A−and when pH > pK then A− is more than HA.

In this system, bicarbonate picks up surplus H+ ions from the system, producing carbon dioxide (CO2) and water.

Similarly, when H+ ion concentration decreases in the system, carbon dioxide combines with water to release hydrogen and bicarbonate ions. The pK of this reaction is 6.1. The Henderson-Hasselbalch equation describes the relationship among pH, pK, and the acid and conjugate base concentration. The Henderson-Hasselbalch equation for bicarbonate and carbon dioxide is as follows:

The Henderson-Hasselbalch equation contains 3 variables; if any two of these are known, the third can be calculated. CO2 is measured clinically as mm Hg and multiplied by its solubility constant (0.03 mmol/L/mm Hg) to get the concentration.

The non-bicarbonate buffers include proteins and phosphates. Protein buffers include extracellular proteins (albumin) and intracellular proteins (hemoglobin). These proteins act as a buffer in both plasma and cells. They interact exclusively with other buffer systems. The amino acid histidine can bind or release hydrogen ions. Due to this, proteins are very effective buffers. Based on the position of histidine in the protein molecule, its pK can vary. The average pK is about 6.5.

Hemoglobin and albumin both have histidine 34 and 16, respectively.

Phosphate buffers are intracellular buffers in the plasma that are less useful than protein buffers. They are found in intracellular fluid and urine. Phosphate can bind 3 H+ ions. They can exist as PO43−, HPO4 2−, H2PO4 1−, or H3PO4. However, HPO4 2− and H2PO4 1− are the most common.

As the pK of this reaction is 6.8, it is also an excellent buffer. However, it is not as good as albumin because the concentration of PO4 in the extracellular fluid is relatively low. It is found at higher levels in the urine, where it is an important buffer.

Of the three buffer systems, the bicarbonate buffer system is arguably the most important as it is the only one that is coupled to the respiratory system.

No H+ ions are produced upon completion of carbohydrate and fat metabolism. The end products of metabolism are water and CO2, and CO2 is exhaled by the lungs. Incomplete catabolism of carbohydrates and fats produces lactic acid and keto acids, like β-hydroxybutyric acid and acetoacetic acid. Normally, this occurs in small amounts, but in various pathologic conditions like lactic acidosis and diabetic ketoacidosis, endogenous acid production is abnormally increased.

Production of excess H+ ions by endogenous acid producing mechanisms in the body are neutralized by bicarbonate, which leads to a decrease in its concentration. The kidneys restore this bicarbonate deficiency through increased secretion of H+ ions. The lungs cannot regenerate bicarbonate, although the loss of CO2 also lowers the H+ concentration:

During metabolic acidosis, an increased ventilation rate lowers the CO2 concentration in the blood resulting in decreased H+ ion concentration and increased pH. This is a rapid compensation that does not last long, as eventually, the respiratory centers adapt to excess CO2 production. When metabolic acidosis persists in the body after three days, the kidneys assume the major compensatory role.

The following reaction is occurring in the body:

Renal Handling of Acids and Bases

After reclaiming filtered bicarbonate, the renal acid-base handling mechanism allows the excretion of acid formed by endogenous acid production (explained earlier). It occurs in the collecting ducts and distal tubule. As the hydrogen pumps in the collecting ducts cannot lower the urine pH below 4.5, urinary buffers are needed to excrete endogenous acids.

The two main urinary buffers are

As the urine pH decreases from 7.0 to 5.0 within the collecting duct, phosphate buffers are very effective. However, the buffering capacity of this reaction is limited by its concentration. Urinary phosphate concentration cannot be modified by any mechanism.

The major mechanism by which the kidneys maintain pH is through regulation of serum bicarbonate concentration. The kidneys promote bicarbonate reabsorption and H+ excretion in the urine. This is a two-step process.

Excretion of H+ into the urine leaves behind HCO3– ions which neutralize endogenous acid production. Renal acid excretion occurs throughout the nephron directly or indirectly but mainly occurs in the distal tubules. Urinary buffers maintain the pH and allow the excretion or neutralization of endogenous acids.

Ammonia production can be modified allowing for the regulation of acid excretion. The buffering capacity of ammonia is based on this reaction:

Proximal tubular cells excrete ammonia, a byproduct of the catabolism of the amino acid glutamine:

Cells of the collecting ducts secrete H+ ions and regenerate bicarbonate, which moves into the bloodstream and neutralizes the endogenous acid production. Renal phosphate and ammonia buffer the H+ secreted. Ammonia is present at a higher concentration in the renal interstitium. Due to free permeability in the collecting ducts, ammonia diffuses into the lumen and neutralizes the H+ ions responsible for the low urine pH effectively buffering the pH.

Renal H+ ion excretion is regulated according to the body’s physiological requirements. When more acid production occurs, ammonia production is also upregulated in the proximal tubules to serve as a buffer in the collecting ducts. NH3 excretion may rise to 10-fold over the baseline values.

In metabolic acidosis, the opposite phenomenon occurs where bicarbonate is reabsorbed in tubules, and H+ ions are secreted by the collecting ducts resulting in absorption of bicarbonates and formation of ammonia buffers.