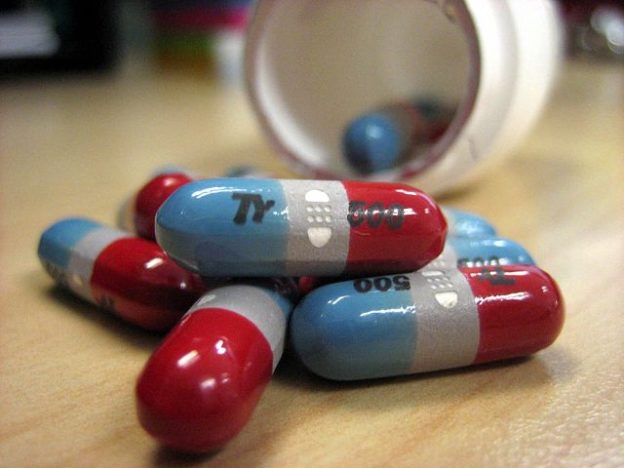 The Liver as an Organ

Although we do not consciously feel our liver working, it actually performs many important functions that are necessary for the maintenance of body homeostasis. From blood storage to vitamin synthesis, the liver is involved in many processes in the body that in case of dysfunction, such as drug-induced liver damage, the consequences become immediately apparent.

Anatomy of the liver

Weighing around 1.5 kg (3.3 lb) in normal human adults, the liver constitutes around 2% of the total body weight. It is considered the largest visceral organ. The liver is supplied by 2 different vascular systems: the portal vein which carries nutrient-rich blood from the gut, and the hepatic artery which carries oxygenated blood from the aorta and heart. These vessels enter the liver through the so-called porta hepatis or the hilum. In the liver, they branch into numerous vessels.

The liver is composed of a functional unit called the liver lobule. This unit represents a collection of hepatocytes arranged in a hexagonal shape, with a triad made up of tributaries from the portal vein, hepatic artery, and bile duct surrounding these hepatocytes. Blood passing through the whole unit is drained by the central vein located at the center of the lobule. 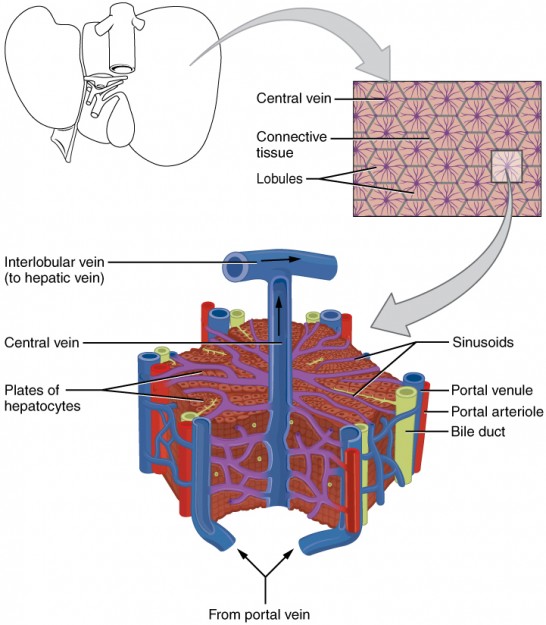 Apart from the hepatic cells, the lobule is also made up of venous sinusoids that are lined with endothelial cells, in between which are large pores, and Kupffer cells. The pores in the sinusoids allow blood to pass through the venule and into the parenchyma easily. The latter type of cell is capable of phagocytosing bacteria and other pathogens that could come in contact with the sinusoids or that exist in the liver parenchyma.

Physiology of the liver

The liver has many functions, which is why any disruption in the integrity of the liver parenchyma results in drastic homeostatic changes with morbid or even fatal outcomes if not controlled. Knowledge of some features of the liver makes it easier to understand the signs and symptoms caused by medications in case of toxicities.

Liver as a blood reservoir

The blood vessels in the normal adult liver can hold around 450 mL ordinarily. However, because of their distensibility, they can hold up to 0.5–1 L of blood in the presence of pathological conditions such as congestive heart failure or peripheral congestion. Because of this feature, the liver can store blood to normalize the pressure in the circulatory system and provide blood supply in situations when there is diminished blood supply.

During partial liver resection, around 70% of the whole organ can be removed. After this surgical procedure, the liver is able to regenerate a new set of hepatocytes and regrow the lost portion of the organ. This notable feature of the liver is thought to be a product of hepatocyte growth factor (HGF), epidermal growth factor, tumor necrosis factor (TNF), and interleukin 6 (IL-6). Despite this ability to regenerate, the growth is limited to a certain extent with the help of transforming growth factor β (TGF-β)>.

A large amount of blood normally flows through the sinusoids and into the liver parenchyma, which makes the liver very prone to blood-borne infections and to damage by pathogens and other substances. However, this is offset by the presence of the active phagocytosing Kupffer cells that constantly keep pathogens from invading the liver tissue.

The liver is the primary organ involved in the metabolism of carbohydrates, fats, and proteins. For carbohydrates, the liver is responsible for the storage of glycogen and the formation of glucose units from other sources such as lipid, protein metabolites, and other sugars. The liver is also responsible for the oxidation of fats and for the synthesis of cholesterol and other lipids. For proteins, the liver is involved in the deamination and synthesis of amino acids.

The liver is well-known as a storage site for many vitamins. The dominant vitamins present in some of the hepatocytes in the liver are vitamin A, vitamin D, and vitamin B12. Because of this feature, a vitamin-poor diet for a few days does not necessarily lead to deficiencies. The liver is also an efficient storage site for iron.

The liver’s role in blood coagulation

There are many clotting factors that are produced in the liver. In the presence of vitamin K, the liver is able to synthesize fibrinogen, prothrombin, accelerator globulin, and factors VII, IX, and X.

Metabolism of Drugs in the Liver 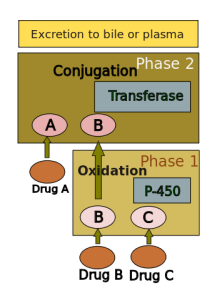 Image: Drug metabolism in the liver. Transferases are: glutathione, sulfate, acetate, glucuronic acid. P-450 is cytochrome P-450 enzymes. 3 different pathways are depicted for drugs A, B, and C. By Drriad, License: CC BY-SA 3.0

Generally, drugs are not the same when they are excreted from the body (with some exceptions). A lot of processes take place between absorption and excretion, and this is mainly because of the metabolic features of the liver. In a phenomenon called the first-pass effect, medications and other substances that are absorbed in the gut are first transferred to the liver by the portal circulation. This makes the liver a screening area for substances that enter the body through the digestive system.

Drugs undergo biotransformation in the liver in order to enter the circulation in proper therapeutic amount and form. Through this process, medications are also transformed into substances that are easily excreted by excretory organs. It usually involves 2 phases:

As mentioned previously, the liver serves as a passageway for almost all the substances that are absorbed from the gut into the circulation. Although processes that occur in the liver in this sense involve the biotransformation of drugs and other substances into usable and disposable forms by the organ, this may not be always the case.

Certain drugs and harmful substances are actually converted into active toxins once they pass through the liver. One example is a drug that is absorbed by the gut as a hapten which could bind to proteins in the liver to cause immunogen production. These newly formed substances can cause a hypersensitivity reaction that can ultimately damage many organs and systems, including the liver itself. This is only one of the many mechanisms by which certain medications damage the liver.

Unusual drug reactions leading to acute liver failure commonly develop on the 1st exposure to the substance. One can actually draw a diagnosis based on the temporal relationship between the manifestations and exposure to the medication.

All over the globe, liver damage caused by drugs is said to occur in 1–14 out of 100,000 individuals. The outcome of this varies from cases of acute liver failure to more chronic liver conditions. The usually implicated substances in drug-induced liver toxicities include alcohol, herbal medications, dietary supplements, topical medications, toxic chemicals such as fertilizers and pesticides, and of course, over the counter medications such as acetaminophen.

Drug reactions can be characterized as either predictable or idiosyncratic. Predictable drug reactions such as that from acetaminophen are dose-dependent, with positive implications for management. Idiosyncratic reactions usually involve a mixture of cell-damaging processes such as hypersensitivity reactions and direct cytotoxicity. The most commonly affected structures are the bile ducts. Examples of medications that can trigger their damage are chlorpromazine and halothane.

Acetaminophen is one of the drugs that can cause liver toxicity. It is considered the most common cause of acute liver failure with indications for liver transplantation in the United States. As a readily available over-the-counter drug, acetaminophen is frequently used inappropriately. 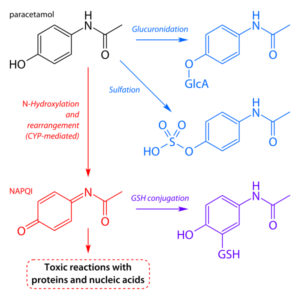 Image: Simplified schematic of the key pathways of paracetamol metabolism in the human body. The first step in the conversion of paracetamol to NAPQI has been omitted for clarity. By Fvasconcellos, License: Public Domain

Acetaminophen is commonly used for the treatment of fever and mild pain. It is available in many preparations including tablets, suspensions, syrups, suppositories, and intravenous solutions. When taken at a therapeutic dose, most of the acetaminophen is metabolized via conjugation by phase II enzymes in the liver. In the urine, metabolites of this drug can be found, bound to glucuronates and sulfates. However, a small amount of drug escapes the phase II conjugation and enters other metabolic reactions that are mediated by CYP proteins. This results in the conversion of otherwise harmless acetaminophen metabolites into N-acetyl-p-benzoquinone imine or NAPQI.

Individuals who take acetaminophen in proper amounts may be spared from the harmful effects of NAPQI metabolites because these reactive substances can be actually neutralized by conjugation with glutathione. Only about 5% of the total dose enters this type of reaction, it means that only traces of NAPQI exist in therapeutic doses.

However, in patients who have taken acetaminophen in large doses accidentally or deliberately (in case of suicide attempts), NAPQI levels may reach dangerous amounts and cause liver damage. The unconjugated NAPQI metabolites cause hepatocellular injury and ultimately, centrilobular necrosis. Two mechanisms are responsible for this:

A particularly narrow therapeutic window for acetaminophen occurs in alcoholics because alcohol is known to induce the pathways that lead to the conversion of acetaminophen metabolites to NAPQI. This means that alcoholics should be monitored closely when taking this seemingly harmless over-the-counter drug.

Initially, efforts to keep the drug from being absorbed in the intestines are instituted. Measures such as induced vomiting, gastric lavage, and administration of activated charcoal or cholestyramine are initiated. Other supportive measures should also be taken. It is important to flush out any remaining acetaminophen in the stomach by implementing the first 2 management techniques before administering other medications. However, the time from ingestion should be noted on admission because some treatments such as the administration of charcoal and cholestyramine become inefficient 30 minutes after acetaminophen overdose.

In cases where there is already an increased plasma acetaminophen level (> 200 µg/mL at 4 hours or > 100 µg/mL after 8 hours), N-acetylcysteine may be given. This medication neutralizes the reaction by donating sulfhydryl donor groups, allowing the used up glutathione molecules to become available. This subsequently reduces the incidence of hepatocellular necrosis. However, some patients may still maintain an elevated amount of acetaminophen in the plasma despite N-acetylcysteine administration. For acute liver failure in this context, liver transplantation may be the only option.