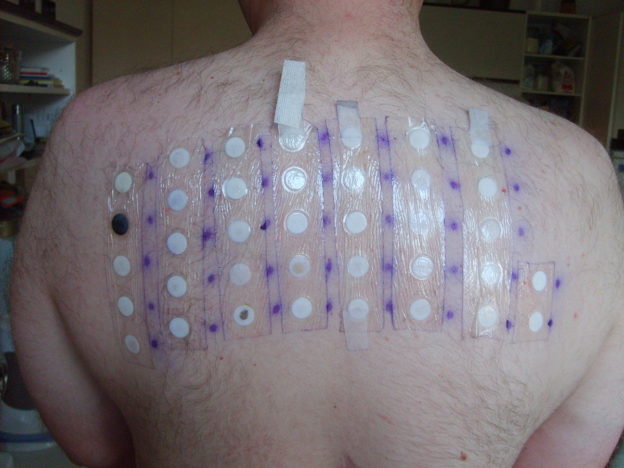 Allergic contact dermatitis (ACD) is a cutaneous immune reaction to the nontoxic allergen(s) that come in contact with the skin. The basic remedy for this condition is to remove or avoid the allergen. However, detection of the disease, avoidance of the allergen, and adherence to the treatment may prove to be difficult. Subsequently, patients may be affected for years, thus posing a serious problem.

Allergic contact dermatitis and irritant contact dermatitis share many similar clinical features, even though the latter is more common; moreover, it is not caused by an immune reaction to well-defined allergens. These two entities constitute more than 90% of occupational skin disorders.

Contact dermatitis consultations account for 4–7% of all dermatology consultations. The tendency to develop this condition is declining slightly, and this may have some implication for the increase in atopic dermatitis by contrast.

Occupational skin diseases rank second to traumatic injuries as types of occupational diseases. The most common causes of irritant contact dermatitis are solvents and cutting fluids, which are used in machining.

Some common substances that cause ACD are nickel, preservatives, dyes, and fragrances. Listed below are some common causes of ACD:

Hairdressers, retail clerks, domestic cleaners, caterers, and metal workers are at risk of developing this condition occupationally. Patients with nickel allergy sometimes develop vesicles on the sides of the fingers (called dyshidrotic hand eczema or pompholyx) due to the presence of nickel in the diet. 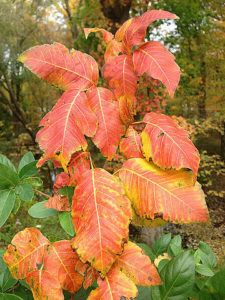 Individuals with rubber glove allergy usually are allergic to one or more chemicals in the gloves. ACD in such cases typically occurs maximally on the dorsal aspects of the hand. A “cutoff” dermatitis is usually seen, ending at the area of the forearm where the skin is no longer in contact with the glove. These patients may also exhibit an allergy to other accessories, for example, elastic waistbands.

Those individuals allergic to chemicals used in the textile industry typically have dermatitis over the trunk, maximally on the lateral sides, sparing the axilla vault. Lesions range from small follicular papules to extensive plaques.

A common constituent of permanent hair dyes and temporary henna tattoos is p-phenylenediamine (PPD). Acute dermatitis and severe facial edema can result from exposure to it. 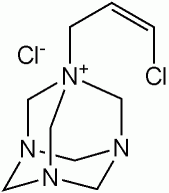 Cosmetics, moisturizers, and topical medications have preservatives that can cause ACD. Quaternium-15 is a common preservative that causes allergic dermatitis, followed by isothiazolinones. Although parabens are one of the most widely used preservatives, they rarely cause ACD.

Formaldehyde is a leading cause of ACD. Certain preservatives used in shampoos, lotions, other moisturizers, and cosmetics are called formaldehyde releasers (such as quaternium-15, imidazolidinyl urea, and isothiazolinones). These compounds are allergenic and sometimes cause cross-sensitization to formaldehyde.

Fragrances are present in numerous products, usually to camouflage an unpleasant odor, apart from being a major component in aftershaves, perfumes, colognes, deodorants, and soaps.

Deodorants may be the most frequent cause of fragrance-related ACD as they are applied to occlude skin, which is often abraded as a result of underarm shaving in women. The population at higher risk of developing fragrance-related ACD includes massage and physical therapists and geriatric nurses.

Cement also causes ACD due to the presence of chromate. Allergic contact dermatitis due to chromate is most commonly found in construction workers.

ACD is the result of T cell-mediated delayed-type hypersensitivity reaction caused by exposure to an allergen.

Compounds that cause ACD must be less than 500 dalton in molecular weight to pass through the stratum corneum, which is the outer lipophilic layer of the skin.

Haptenization is a process through which small chemically reactive organic molecules (chemical sensitizers/allergens, mostly electrophilic) bind to peptides/proteins (nucleophilic) in the skin, thus generating immunogenic neoantigens. Although these haptens/allergens can penetrate through intact skin, diseases that impair barrier function, such as leg ulcers and perianal dermatitis, increase the risk of sensitization to topical drugs.

Haptenated self-proteins (haptens) are recognized by the dermal innate immune mechanisms, and this results in the production of proinflammatory mediators like interleukin–1β. As a result, skin-resident dendritic cells (DCs) are activated.

Langerhans cells constitute the sole DC subtype in the epidermis. Langerhans cells efficiently acquire the antigen in the periphery and subsequently migrate to the regional lymph nodes, where they present the acquired antigen to naive T cells and memory T cells.

Finally, the hapten-induced inflammation sends activated effector T cells to the original site of antigen encounter in the skin. Proinflammatory cytokines, such as interferon-γ, are released by the effector T cells. This promotes the killing of haptenated cells/keratinocytes containing hapten-protein complex, resulting in the classic inflammatory rash present in ACD.

Keratinocytes express TLRs extensively, and they respond to TLR4-triggering haptens like nickel. Keratinocytes produce IL-10, an immunosuppressive cytokine that limits the extent of contact hypersensitivity.

It takes 10–14 days from initial exposure to a strong contact allergen like poison ivy for the development of initial sensitization (sensitization phase). Once an individual is sensitized to a specific chemical, ACD can develop in a matter of hours after re-exposure (elicitation phase). After the clinical resolution of ACD, CD4+ CCR10+ memory T cells persist in the dermis.

The typical presentation for ACD includes edema, erythema, vesicles, oozing, and intense pruritus. Only erythema is visible at the area of contact in mild cases. In more symptomatic cases, spongiotic vesicles that itch and burst, subsequently weeping intensively and crusting thereafter, may be seen. In cases caused by a single exposure, all lesions observed are at the same stage. 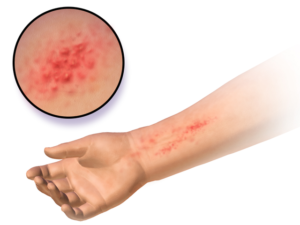 When the findings become chronic, eczema is present; features such as desquamation, hyperkeratosis, lichenification, and fissuring become more prominent. Subsequently, the lesion becomes less sharply circumscribed, and infiltration and thickness of the skin are noted to increase. The body site may give important clues as to the cause of ACD. It is the starting point for detailed history taking, which is a crucial guide for patch testing to identify the responsible allergen.

In some cases, generalized contact dermatitis occurs. Exposure to high doses of allergens, spread via blood vessels, or a generalized overall activation of the immunologic effector cells have all been suggested as potential explanations for this condition.

In contrast, acute irritative-toxic dermatitis may present with pustules, ulceration, and necrosis apart from vesicles, bullae, edema, erythema, and oozing. Dryness and roughness may also be present in some cases. Pruritus is usually present, but the main symptoms are burning and pain. It is usually sharply defined and does not disseminate. The following table summarizes the distinguishing features that can be used to differentiate between irritant and allergic contact dermatitis.

Potassium hydroxide preparation may be done to rule out tinea.

Patch testing is done to identify the external chemicals to which an individual is sensitive. Most dermatologists perform patch testing using the TRUE test. This test can identify relevant allergies in as many as half of the affected patients. 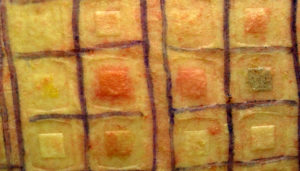 Small amounts of appropriately labeled dilutions of chemicals are applied to the skin and occluded for 2 days. A chemical must remain under a skin patch for a minimum of one day to produce a positive patch test reaction about 2–7 days following the initial application. The test is read at 48 hours and again between 72 hours and 1 week.

The patient’s history usually provides more information regarding the allergens to use in the test. Elderly patients tend to manifest positive patch test reactions later than younger patients. Patch testing may be avoided for patients taking more than 15 mg/day of prednisone.

Angry back syndrome or excited skin syndrome may occur in patients who have a strong positive patch test reaction, usually secondary to the hypersensitivity of the skin to the chronic use of allergens.

The chemicals used are tested under allergEAZE chambers, Finn chambers, or the IQ Chamber patch test. The chemicals in photo patch testing are applied in duplicate sets: one set receives 10 J/cm2 of UV-A (or 1 J/cm2 less than the ‘minimum erythema dose‘, whichever is lowest), 24 hours following application of the allergens; the other set is protected from UV exposure. Both sets are read 48 hours after their application.

In those with weak or 1+ positive reactions to a chemical, this test is useful in determining whether the reaction is significant.

The dimethylglyoxime test is used to identify whether metallic objects contain enough nickel to provoke allergic dermatitis in those allergic to nickel.

Skin biopsy is helpful in ruling out tinea, psoriasis, and cutaneous lymphoma.

The histologic findings for ACD are similar to those for other forms of eczematous dermatitis. In the dermis, the inflammatory infiltrates mainly consists of lymphocytes and other mononuclear cells. Epidermal edema may be seen; however, it may be absent in long-standing dermatitis. ACD may simulate mycosis fungoides due to the presence of atypical T-cell infiltrates.

The most important therapeutic measure is to avoid contact with the allergen. Often, this may not be feasible because of work or environmental circumstances. In such cases, protective measures may be helpful, such as wearing appropriate clothes (like gloves, masks) and barrier creams.

Most frequently, topical corticosteroids (class II-III, most commonly mometasone furoate or betamethasone) are used. In areas with thin epidermis, such as intertriginous areas and steroid-induced atrophy, topical calcineurin inhibitors (like tacrolimus, pimecrolimus) can be used for maintenance therapy. Antihistamines can reduce pruritus in some cases.

Chronic ACD may respond to narrow-band UV-B phototherapy or psoralen plus UV-A (PUVA) administration. Retinoids, such as alitretinoin and acitretin, are very effective in eczema management; however, the use of contraception should be advised due to their teratogenic potential. Rarely, immunosuppressive agents, such as cyclosporine, azathioprine, or mycophenolate, are used in chronic disease. Biologics like the IL-4/IL-13 antagonist dupilumab and the IL-6 antagonist tocilizumab are of unknown benefit in ACD.

Once acquired, contact sensitivity generally tends to persist. There may be a decline in sensitivity unless it is boosted by repeated exposure. However, with high initial sensitivity, it often remains demonstrable even several years later.