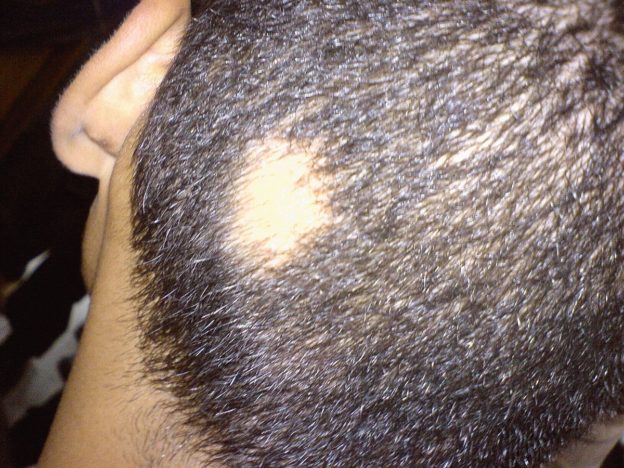 Alopecia areata affects 1% of the population (although this figure varies from 0.1% to as much as 2%). There is no sex predisposition, but men seem to be more frequently affected by more severe forms of the disease than women. It starts more commonly in children and young adults and has a sudden onset. Interethnic variation is not significant.

The etiology of alopecia areata remains unclear, but it may be related to genetic, immunologic, and environmental factors.

About 20% of patients with alopecia areata have at least one parent or sibling who is affected. The concordance among monozygotic twins is 55%. Some HLA class II genes are shown to be associated with alopecia areata: DQ3, DQ7, DR11, DR4, DR5, and DPW4, with the former three predisposing to more severe forms. One study also reported that eight genomic loci are associated with this disease.

Many patients with alopecia areata have other autoimmune disorders, such as lupus erythematosus, scleroderma, thyroiditis, celiac disease, etc. Also, the fact that steroids and immunomodulators are effective against this disease further suggests an autoimmune pathology

Pathology and Pathophysiology of Alopecia Areata

Alopecia areata is essentially an autoimmune disease resulting from a genetic predisposition and/or environmental factors. The loss of immune privilege by the hair follicle (perhaps due to attack by natural killer cells) and the subsequent change in the cytokine/chemokine profile leads to the infiltration of T lymphocytes around the bulb.

Important: One of the two hallmarks of alopecia areata is peribulbar infiltration of CD4+ and CD8+ cells around anagen follicles. The other hallmark is the presence of exclamation mark hair.

There is a sudden onset of non-scarring patch or patches of hair loss on any hair-bearing area, most commonly the scalp and also the beard area. Rarely, the eyebrows can also be affected.

Most patients have only a single patch, but two or more than two patches are not rare. The multiple patches may coalesce into a large area of alopecia. The patches themselves are asymptomatic; however, some patients may experience itching or burning.

Alopecia, although normally unifocal or multifocal, can come in various forms:

The severity of the disease is classified as follows:

The diagnosis of alopecia areata is mainly clinical; an excisional biopsy is rarely needed. Some of the clinical tests that can be performed are:

Other skin diseases can also cause patchy hair loss:

Diffuse alopecia areata must be differentiated from the following conditions:

At present, there is no cure for alopecia areata, nor is there any effective agent that universally induces remission. The treatment includes topical, intralesional, and/or systemic agents, and varies with patient age and disease severity.

Some prefer intralesional steroids over topical steroids, especially for small patches of alopecia. Redness and spots are possible at the site of injection. Systemic corticosteroids are not preferred because of high rates of side effects and high relapse rates; however, short-term therapy, such as pulse methylprednisolone or oral mini-pulse therapy, is reported to be effective.

Minoxidil (usually as 5% lotion for men and 2% lotion for women; twice daily, not more than 25 drops twice a day) is another agent that is used in the treatment of alopecia areata. It works by stimulating hair growth, especially follicular proliferation. It may be given alone or combined with anthralin. Skin irritation may occur, manifesting as itching, rash, spots, etc., at the site of application.

Short-contact or overnight treatment with anthralin (usually as 0.5% or 1% cream), an agent that has irritant properties as well as immunosuppressive and anti-inflammatory properties, has been reported to be an effective treatment. This type of treatment is recommended for use in children. The adverse effects of anthralin are scaling of the skin, folliculitis, and lymphadenopathy. Anthralin preparations can stain the clothes.

Topical immunomodulators (e.g., dinitrochlorobenzene, diphenylcyclopropenone, or squaric acid dibutyl ester) work by inducing allergic contact dermatitis. Another therapy with reported efficacy is psoralen with ultraviolet A (PUVA); however, it has a high relapse rate. Other drugs include topical tacrolimus, topical cyclosporine, and methotrexate.

Therapies of uncertain efficacy in the treatment of alopecia areata include aromatherapy (massage of certain essential oils every day for 2 minutes on the patches).

There is a lot of psychological distress among these patients. Counseling and psychotherapy may be advised, and wigs may be prescribed to such patients.

Progression and Prognosis of Alopecia Areata