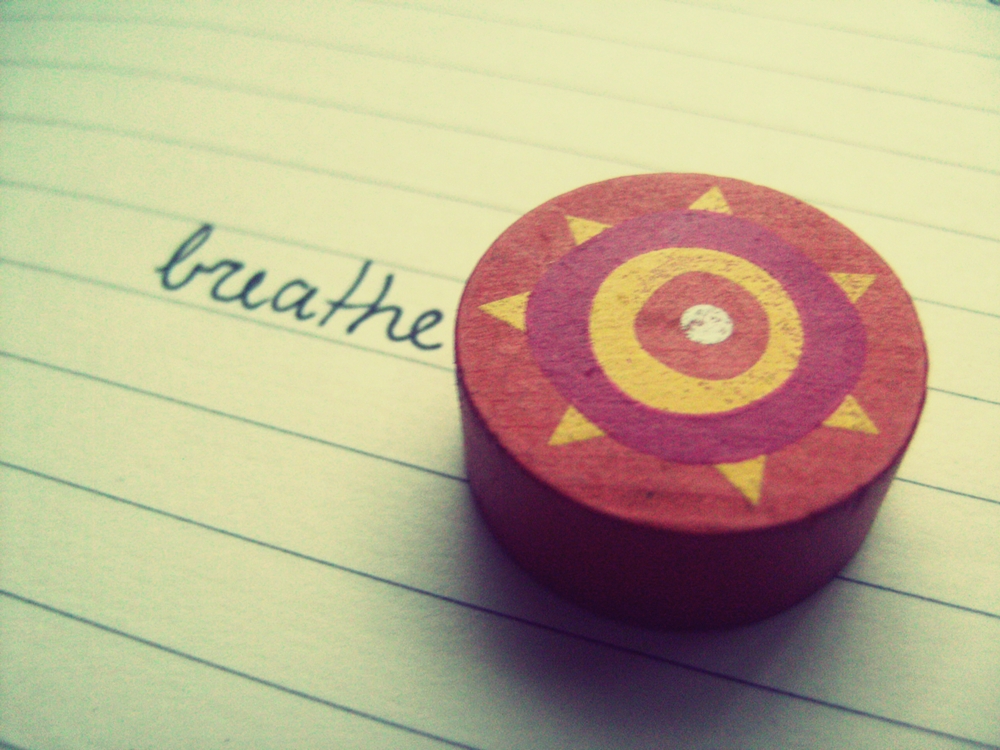 The partial pressure of oxygen in the alveoli can be calculated using the following alveolar gas equation:

Under most clinical conditions, the value of K is not large enough to make a difference in the value of PAO2, and hence can be neglected.

The difference between the values of PAO2 calculated using the above 2 equations is only due to inert gas exchange; hence, they can be used to calculate the concentration effect.

This equation facilitates the disequilibria of inert gases. Therefore, it can be used during induction or recovery from anesthesia. Important assumptions for the above equation are:

Hypoxemia is defined as a decrease in arterial PO2, while hypoxia indicates decreased oxygen delivery to the tissues. PO2 can be calculated using the alveolar gas equation (discussed above). The patient may develop hypoxia in the presence of normal PaO2, as in carbon monoxide poisoning or decreased hemoglobin (anemia).

Assuming that the patient is breathing room air at sea level, with normal body temperature:

The A-a O2 gradient increases by 3 mm Hg for each decade over 30 years of age.

As the shape of the oxygen dissociation curve is non-linear, greater the PAO2, greater is the A-a O2 gradient, provided the rest of the factors remain the same.

The CO2 dissociation curve is steep and a further linear increase in arterial CO2 content does not significantly increase the PaCO2 level. Under clinical settings, compensatory hyperventilation is more than adequate to offset the small increase in PaCO2. Therefore, PaCO2 is often decreased, rather than increased. 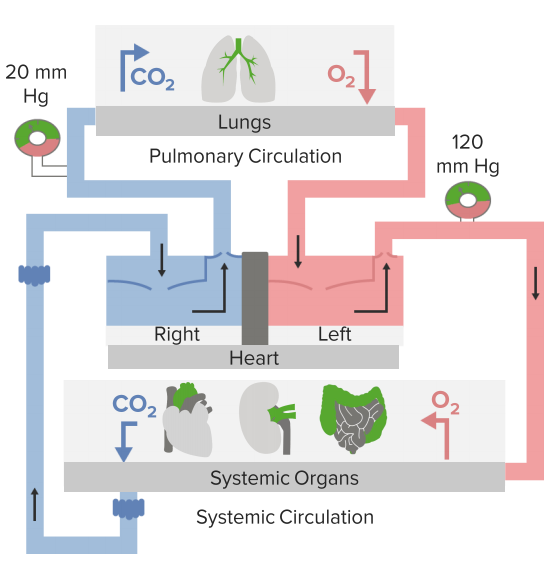 There are 5 important pathophysiological causes of hypoxemia and respiratory failure.

The minute ventilation depends on the respiratory rate and tidal volume, which is the amount of inspired air during each normal breath at rest.

The normal respiratory rate is about 12 breaths per minute and the normal tidal volume is about 500 mL. Therefore, the minute respiratory volume normally averages about 6 L/min.

Hypoventilation occurs when the respiratory rate and tidal volume are decreased so that the amount of air exchanged per minute is decreased. A decreased oxygen entry within the alveoli and the arteries leads to decreased PaO2. As already described, PaCO2 is inversely proportional to the ventilation; hence, hypoventilation increases PaCO2. The A-a gradient is normal and less than 10 mm Hg in the absence of abnormal diffusion of gas. In these cases, ventilation or the oxygen concentration can be increased to correct the abnormal behavior of blood gases.

Image: Overview of Diffusion in the lung. By Lecturio

Impaired diffusion is attributed to structural defects within the lung. A decreased surface area (as in emphysema), or increased thickness of alveolar membranes (as in fibrosis and restrictive lung diseases) that impairs the diffusion of gases across the alveoli increases the A-a gradient. Under increased A-a gradient, the alveolar PO2 is normal or increased, but the arterial PO2 is decreased. A greater structural defect leads to higher alveolar-arterial gradient.

Since the diffusion of gases is directly proportional to the gas concentrations, increasing the concentration of inhaled oxygen corrects PaO2. However, the increased A-a gradient persists as long as the structural problem remains.

In a pulmonary shunt, also known as a right-to-left shunt, the venous deoxygenated blood from the right side enters the left side of the heart and systemic circulation without getting oxygenated within the alveoli. Thus, a shunt refers to ‘normal perfusion, poor ventilation’.

The lungs carry a normal blood supply, but under decreased or zero ventilation no gas exchange occurs with the incoming deoxygenated blood. The ventilation-perfusion (V/Q) ratio is close to zero, especially in atelectasis and cyanotic heart diseases. In atelectasis, the collapsed lung is not ventilated and blood within that segment fails to oxygenate. In cyanotic heart diseases, the blood from the right side bypasses (shunts) the lungs and enters the left side, causing hypoxemia and cyanosis. 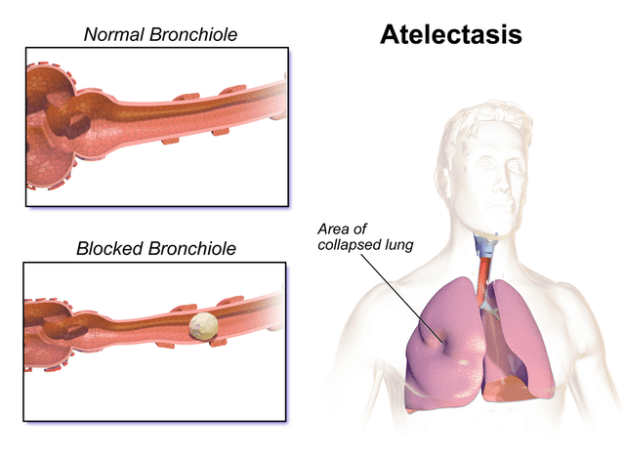 The A-a gradient is increased as deoxygenated blood enters the arterial (systemic) circulation, which decreases the PaO2.

Since venous blood does not oxygenate in the pulmonary shunt, increasing the oxygen concentration does not correct the hypoxemia. The blood will bypass the lungs regardless of the increased oxygen concentrations. This failure to increase PaO2 after oxygen administration is very important in distinguishing impaired diffusion from other causes of hypoxemia that are corrected with supplemental oxygen.

V/Q is the ratio of alveolar ventilation (V) to pulmonary blood flow (Q). A V/Q match facilitates adequate exchange of oxygen and carbon dioxide within the alveoli. The V/Q ratio in normal individuals is around 0.8, but this ratio is altered in the presence of significant ventilation or perfusion defects. 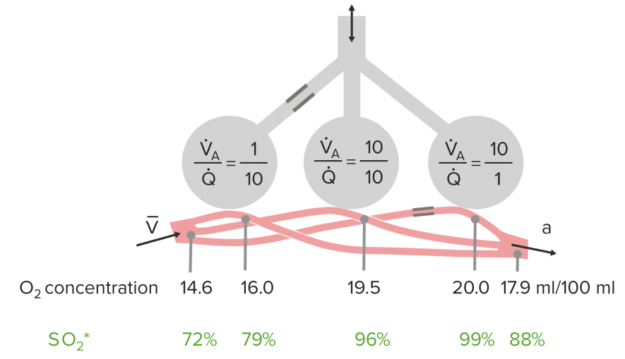 Within the lungs, all the alveoli do not exhibit uniform ventilation and perfusion due to the effects of gravity. 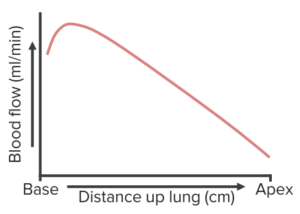 Image: Perfusion of the Lung. By Lecturio

At the apex of the lung, the alveoli are large and completely inflated, while they are small at the base. Similarly, the blood supply is higher at the base of the lung than at the apex, which creates physiological ventilation (V) – perfusion (Q) mismatch between different alveoli. 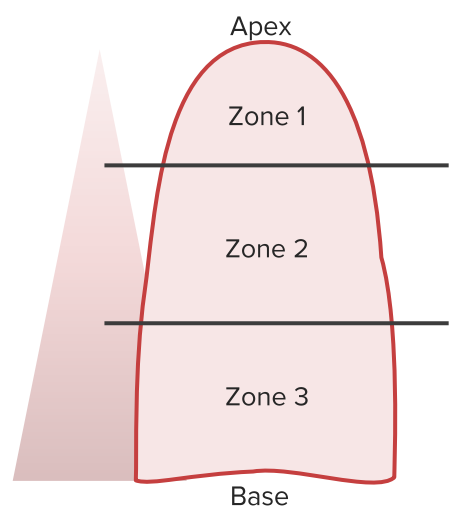 Image: Perfusion of the upright lung – apex and base. By Lecturio

The decreased V/Q ratio (< 0.8) may occur either due to decreased ventilation (airway or interstitial lung disease) or as a result of over-perfusion. The blood is wasted in these cases and fails to oxygenate adequately. In extreme conditions, when ventilation is significantly decreased and the V/Q approaches zero, it behaves as a pulmonary shunt.

The increased V/Q ratio (> 0.8) occurs when perfusion is decreased, for e.g., in pulmonary embolism preventing blood flow distal to obstruction or under excessive ventilation. The air is wasted in these cases and fails to diffuse through the blood. In extreme conditions, when perfusion is significantly decreased and V/Q approaches 1, the alveoli act as dead space and no diffusion of gases occurs.

Therefore, the increased V/Q mismatch within the lung impairs the gas exchange mechanisms and ultimately leads to hypoxemia and respiratory failure.

At high altitudes, the barometric pressure (PB) is decreased, which leads to decreased alveolar PO2 as in the following equation:

The decreased alveolar PAO2 leads to decreased arterial PaO2 and hypoxemia but the A–a gradient remains normal as there is no defect within the gas exchange mechanism. Under these conditions, supplemental oxygen therapy (elevated FIO2) increases the PAO2 and corrects the hypoxemia.

When a person suddenly ascends to high altitude, the body responds to hypoxemia via hyperventilation causing respiratory alkalosis. The concentrations of 2, 3-diphosphoglycerate (DPG) are increased, shifting the oxygen-hemoglobin dissociation curve to the right.

Under chronic conditions, acclimatization occurs and the body responds by increasing the oxygen-carrying capacity of the blood (polycythemia). The kidneys excrete bicarbonates and maintain the pH level within normal limits.