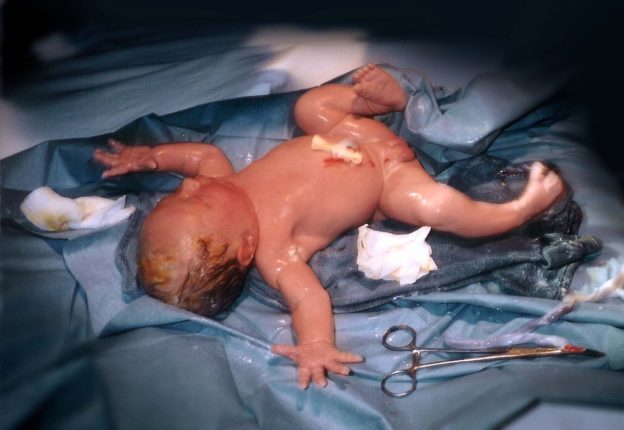 Definition of the Third Stage of Labor

The third stage of labor is generally the fastest stage of labor, lasting less than five minutes in an uncomplicated delivery. The infant has been delivered and there is still some minor bleeding.

Inspection for perineal tears and their repair

Episiotomies and lacerations are evaluated and repaired before the separation of the placenta if possible to allow for visualization before blood gushes out due to placental separation.

There are several types of episiotomies. Most episiotomies are midline, meaning the cut is made straight down from the vaginal introitus toward the rectum. In cases where more room is needed, a mediolateral episiotomy can be done but this is more difficult to repair and causes more post-procedure pain.

In a midline episiotomy, the perineal tear/lacerations are classified as:

Delivery of the placenta

The uterus contracts to expel the placenta, which ideally is intact with no remaining placental tissue in the uterus. This should take two minutes but may take as long as 30 minutes.

Signs of placental separation include:

Symptoms and Signs of the Third Stage of Labor

The third stage of labor is marked by a significant decline in pain. The mother is generally distracted by the delivery of her infant and pays little attention to the third stage of labor. The woman will continue to have cramping in the lower abdomen and pelvis as the uterus contracts to expel the placenta. If the woman has had epidural anesthesia, this is continued so any lacerations or episiotomies can be repaired.

The third stage of labor presents with an umbilical cord remaining in the vaginal opening. The perineum may be intact or may have suffered some lacerations. Routine episiotomy is no longer recommended for normal vaginal deliveries but may be done when expeditious delivery is necessary for the third stage of labor. Lacerations or episiotomies can begin to be repaired before the placenta presents itself.

Signs that the placenta has detached include elongation of the umbilical cord, a change in the shape of the uterus so that it is more globular, and a sudden gush of blood that signals the detachment of the placenta from the uterine wall.

Special Tests in the Third Stage of Labor

No special tests need to be done in a normal delivery. In cases of severe postpartum hemorrhage of unknown etiology, tests of clotting function, such as bleeding time, prothrombin time, and partial thromboplastin time may be ordered to identify an underlying bleeding pathology in the mother.

Complications in the Third Stage of Labor

The only complications of the third stage of labor are ;

If placental delivery and perineal tear repair are done correctly, hemorrhage rarely persists. Moreover, a labor and delivery nurse should continue massaging of the uterus to maximize the tone of the uterus. And encourage contraction and arrest of bleeding. Postpartum hemorrhage is seen in cases of retained placental fragments, atony of the uterus, laceration, and a preexisting bleeding disorder.

Common indicators of a likely post-partum hemorrhage event include:

Treatment in the Third Stage of Labor

There are two main interventions that need to be done in the third stage of labor. The first is the facilitation of the evacuation of the placenta described above. If this is done correctly, continued massage of the uterus is done by a labor and delivery nurse to maximize the tone of the uterus.

If uterine massage and medications fail to stop the bleeding, surgical interventions may be considered. The patient may be taken to the operating room to have a curettage to remove placental fragments. The cervix and perineum need to be carefully examined for an extrauterine cause of the bleeding.

If the curettage fails and there is ongoing hemorrhage not caused by a bleeding disorder, a uterine artery embolization may be necessary. Packing of the uterus may stop the bleeding. Arterial ligation may control hemorrhage. In severe cases, where nothing is stopping the bleeding, the patient may need an emergency hysterectomy.

Episiotomy repair is the second intervention that needs to happen. There are several types of episiotomies. Most episiotomies are midline, meaning the cut is made straight down from the vaginal introitus toward the rectum. In cases where more room is needed, a mediolateral episiotomy can be done but this is more difficult to repair and causes more postprocedure pain.

Prognosis of the Third Stage of Labor

The prognosis is excellent in the third stage of labor. The risk of postpartum hemorrhage when there is active management to control bleeding is about 5 %. Care must be taken to remove the placenta without causing inversion of the uterus, and the anus, perineum, and cervix must be examined for lacerations or hematomas.