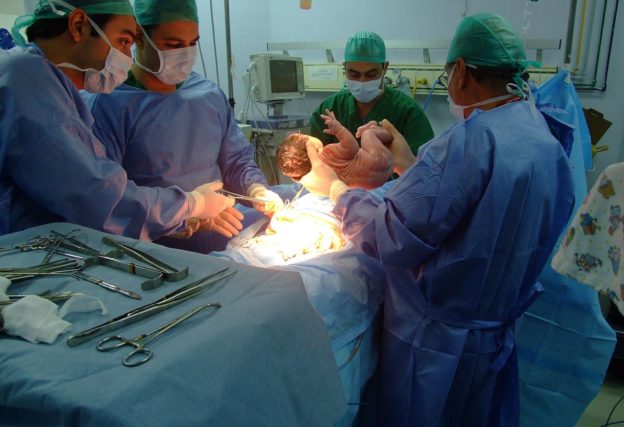 Definition of the Second Stage of Labor

The second stage of labor is defined as that part of a normal labor process that begins with complete dilatation of the cervix and ends with the delivery of the infant.

Mechanisms of the Second Stage of Labor

In this stage of labor where the fetus goes through the cardinal stages of movement. In the vertex presentation it entails:

Engagement into the pelvic inlet

The fetal head needs to engage in the pelvic inlet in an occiput-transverse position in 70% of females. Occurs 2 weeks prior to the erm in primigravids and just before delivery in multiparous women.

Allows the sub-occipital-bregmatic diameter to be the presenting diameter.

Slowly progressive down the pelvis under the influence of the forces of uterine contraction. It continues until the fetus is delivered.

With descent into the mid-pelvis, internal rotation must occur to allow for the sagittal suture to occupy the anteroposterior diameter of the pelvis.

The vaginal outlet is located upwards and forwards in relation to the rest of the pelvis thus, the extension must occur for the head to pass through and allow for crowning.

Once the shoulders are safely delivered the infant is generally easy to expel in this last stage.

A total of 70 % of pregnancies end with vaginal delivery. Some women have planned cesarean sections due to indications that preclude labor and delivery, while others have labor complications, usually in the first stage of labor that result in an emergency cesarean section.

Symptoms and Signs of the Second Labor Stage

In the second stage of labor, the woman has contractions that are three minutes apart, lasting about 90 seconds in duration. Most women feel extreme rectal pressure and feel a strong urge to defecate. This is because the fetal head has descended and is pressing on rectal tissues, sending a signal to push.

Women with a high station at the time of full cervical dilation often don’t feel the urge to push yet but must be coaxed to push until the head descends further in the birth canal.

During this stage of labor, the mother continues to be monitored using a tocodynamometer to measure contractions or an internal pressure catheter, which measures intrauterine pressure.

Special Tests in the Second Stage of Labor

If there is a prolonged second stage of labor or suspicion of fetal distress, fetal scalp stimulation can be done, in which the fetus’s scalp is pushed on with a gloved hand and rubbed for a few seconds. If the fetal heart rate increases by fifteen beats per minute after scalp stimulation, the fetus is likely not in distress.

If there is a further concern, fetal scalp blood sampling can be done. A lancet is used to get a sample of blood from the fetal scalp and is tested for pH and lactate levels. If the pH is low and the lactate level is high, this indicates acidosis in the infant and is an indication for immediate delivery by operative means.

Treatment of abnormalities in the Second Stage of Labor

Image: “Bruising and deformation of the scalp caused by vacuum extraction. Child’s scalp was fine in a week.” by User:Ravedave – Own work. License: CC BY 2.5 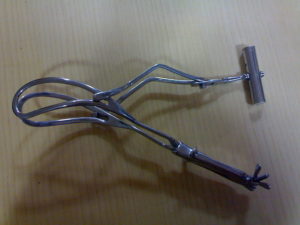 Image: “Das’s modification to the long curved delivery forceps (shorter in length) with axis traction devices in place, seen from the right side (left blade on top: with respect to the mother’s vaginal wall).” by Sarindam7 – Own work. License: GFDL

Possible Complications in the Second Stage of Labor

The major complication of the second stage of labor is a failure to progress in the second stage. This means that the fetal head is unable to engage in the pelvis or becomes stuck in the birth canal with an inability to progress any further even with vacuum-extracted assistance or with the use of forceps. There may be fetal distress or fetal acidosis detected on fetal scalp blood sampling, indicating the need for operative intervention with cesarean section.

Shoulder dystocia can be another complication of the second stage of labor. Shoulder dystocia happens when the anterior shoulder becomes impacted against the pubic bone, preventing delivery of the shoulder after the head has been delivered. It is seen in 0.6—1.4 % of deliveries with up to 20 % of the neonates suffering brachial plexus injuries. Things that predict shoulder dystocia include:

Shoulder dystocias are unpredictable so you should always be prepared!

If the infant’s head retracts after a contraction while the head is at the perineum, this is called a “Turtle sign” and should indicate the possibility that the shoulders are impacted.

There are things that can be done to continue a vaginal delivery when shoulder dystocia is present, and they include:

Prognosis of the Second Stage of Labor

Most women who have had a successful vaginal delivery in the past will have an uncomplicated second stage of labor that may be precipitous as the soft tissues of the birth canal have been stretched in a previous delivery.

The prognosis for a vaginal delivery declines after two hours as this generally means there is an arrest of labor due to failure of the presenting part to descend through the birth canal. This is grounds for an operative vaginal delivery or cesarean section.