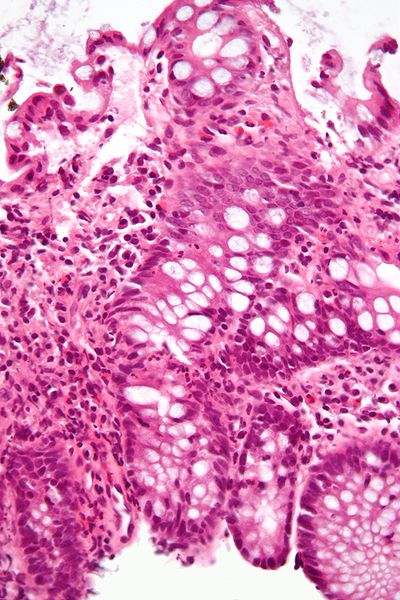 Inflammatory bowel disease (IBD) includes Crohn’s disease and ulcerative colitis. Although IBD cases are reported worldwide, the disease incidence is higher in developed countries, regions with colder climates, and urban areas. Approximately 10% of patients with IBD in the United States are younger than 17 years of age.  Crohn’s disease is more prevalent than ulcerative colitis in the pediatric population. Compared to adult-onset IBD, the incidence of pediatric IBD is higher in boys than girls, but the incidence in girls increases with age.

“Epidemiology of IBD” created by Lecturio

IBD etiology is multifactorial; environmental, genetic, and immune factors are implicated. Genetics probably plays an important role in pediatric IBD etiology since children are not exposed to environmental causes, like cigarette smoke and non-steroidal anti-inflammatory drugs, as much as adults are and immune modifiers have not yet exerted their effects.

An association between Crohn’s disease and the NOD2/CARD15 gene on chromosome 16 has been reported. Children may face an increased risk of IBD if they possess IBD5 and tumor necrosis factor-alpha (TNF-alpha) genes. While the NOD2/CARD15 gene has been associated with an ileal fibro-stenotic disease, IBD5 has been implicated in perianal disease. First-degree relatives and twins are more susceptible to the disease.

Several bacteria and fungi have been implicated in IBD etiology because of elevated titers against them. Some studies suggest the roles of interleukin -15 (IL-15) and the IL-15 receptor (IL-15R) system in IBD. Smoking during adolescence can trigger the onset of the disease, mainly Crohn’s disease. High fiber intake and a high intake of fruits and vegetables can help avoid the disease.

The exact immune factors are unknown because children are not exposed to most of the medicines that induce autoimmunity at such a young age.

Signs and Symptoms of Pediatric IBD

The clinical manifestations of IBD in children are more aggressive and have a more complicated clinical course than adult IBD.  Approximately 35% of children may have severe pancolitis at presentation.

The common presenting features in ulcerative colitis include:

Presenting features in Crohn’s disease include:

A large percentage of pediatric patients have linear growth restriction several years before the disease is diagnosed. Growth and development of secondary sexual characteristics, as well as puberty, may be delayed by cytokines and endocrine abnormalities. Also, the treatment of IBD with long-term corticosteroids can lead to osteoporosis.

The risk of malignancies and lymphomas is high in patients who are diagnosed with IBD before the age of 25 years.

Detailed history: Given the long-term complications associated with pediatric IBD, diagnosing the condition as early as possible is important.  The workup includes a detailed history of onset, duration of symptoms, history of recent travel, food intolerance, medication intake, and a family history of IBD.

Endoscopy: The gold standard test for IBD diagnosis consists of upper and lower gastrointestinal endoscopy. Biopsies from the mucosa for histopathology help to differentiate between Crohn’s disease and ulcerative colitis.

CT scans and MRI: Computed tomography and magnetic resonance enteroclysis may be alternatives to small bowel follow-through to determine the extent of the disease and its complications.

Capsule endoscopy can be performed; however, children may not be able to swallow the capsule. In this case, the capsule must be placed in the duodenum endoscopically.

Serological tests: Serological markers like the Anti-Saccharomyces cerevisiae antibody (ASCA) and perinuclear anti-neutrophil cytoplasmic antibody (p-ANCA) have high specificity for IBD. The ASCA IgA and IgG are 100% specific for Crohn’s disease in the pediatric population.

IBD can be managed medically to control symptoms and induce remission. This will reduce the need for surgical intervention.

Mild to moderate disease is initially treated with sulfasalazine or mesalamine or antibiotic therapy (metronidazole and ciprofloxacin). Corticosteroids are the mainstay of treatment in moderate to severe disease, but they are contraindicated in children with severe growth restriction or severe bone demineralization. Immunomodulators, like Azathioprine (5-ASA) and 6-mercaptopurine, are used as maintenance therapy for children in remission.  For cases refractory to steroids and immunomodulators, infliximab, a monoclonal antibody, can be used to treat moderate to severe disease.

Mild to moderate disease is treated with enemas or oral 5-aminosalicylic acid agents, sulfasalazine, and mesalamine. Corticosteroids can be used in children with moderate to severe disease, but are refractory to treatment with aminosalicylates. Immunomodulators are prescribed to maintain remission but not to induce it.

Also, nutritional assessment and support are important in the treatment of IBD-associated malnutrition and growth restriction in children. Iron, calcium, Vitamin D/B12, and folate supplementation are essential, too. High fiber intake and a high intake of fruits and vegetables can help avoid the disease.

Indications for surgery in pediatric Crohn’s disease are:

More than 50% of the patients are likely to require surgical intervention.

Indications for surgery in ulcerative colitis include: