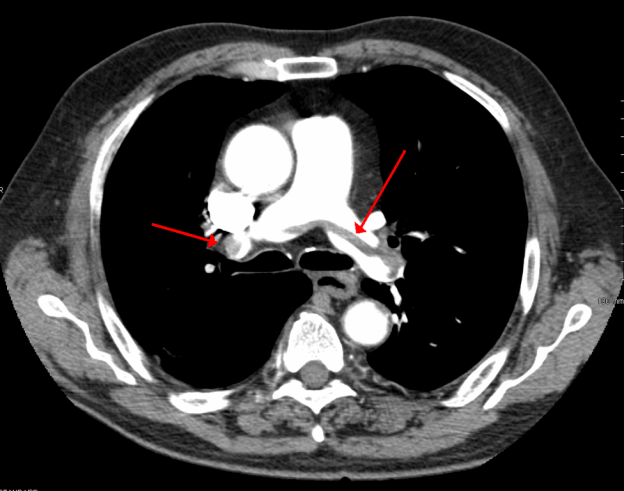 Pulmonary embolism (PE) is a serious disease that is caused by obstruction of the pulmonary vessels mechanically by a thrombus, air, fat, or tumor elsewhere in the body, a process called embolization. PE can be classified as massive or submassive pulmonary embolism.

A study of more than 42 million deaths in a period of 20 years has shown that only about 1.5% (600,000) of the cases were diagnosed with pulmonary embolism. About 200,000 deaths were assumed to be a result of PE. Although these are large numbers, they still underestimate the true incidence of pulmonary embolism because more than half of the patients die undiagnosed. More cases have been diagnosed over the past few years after the introduction of the CT pulmonary angiogram.

Massive PE causes a severe lowering of blood pressure (hypotension). It should be suspected in patients with hypotension that is associated with jugular venous distention, if the latter is not fully explained by any other underlying disease, such as acute MI, pericardial tamponade, tension pneumothorax, or new arrhythmia. Criteria for diagnosis are as follows:

The prognosis of massive pulmonary embolism is bad, and it usually results in right ventricular dysfunction and death.

If acute PE doesn’t meet the criteria for massive PE, it is considered submassive. 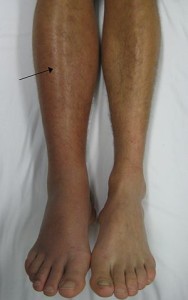 The process of embolization is caused by thrombi that have formed elsewhere in the body. Thrombi commonly originate from the deep venous system of the lower extremities via deep vein thrombosis (DVT). Therefore, assessment of the lower extremities’ deep veins by duplex ultrasound is important to rule out DVT, especially in bedridden patients, who are at risk of blood stagnation and formation of thrombi. Although lower-limb DVT is the most common cause of pulmonary embolism, thrombi may also originate from the right side of the heart, the upper extremities, and the pelvic or renal veins.

The most clinically recognized PE results from dislodged thrombi in the iliofemoral veins. About 60–80% of the iliac, femoral, and popliteal vein thrombi arise below the popliteal vein (calf vein thrombi), then propagate proximally, while the rest of the thrombi arise from the proximal veins themselves. Upper extremity venous thrombosis became a very common problem after the increased usage of central venous catheters and insertion of permanent pacemakers and internal cardiac defibrillators (ICDs).

The problem arises when these thrombi dislodge from their sites of formation and spread to the lungs through the right side of the heart, with subsequent lodging of the large thrombi at the bifurcation of the main pulmonary arteries or their branches causing hemodynamic instability.

Sometimes, an embolus may paradoxically pass through a congenital shunt between the right and left atrium (e.g., patent foramen ovale) into the arterial circulation, causing acute lower-limb ischemia. On occasion, smaller thrombi travel more distally into the smaller pulmonary branches, then initiate inflammatory reactions adjacent to the parietal pleura, causing pleuritic chest pain. About 10% of patients, especially those with underlying cardiopulmonary disease, are at risk of pulmonary infarction. Pulmonary emboli are usually quite numerous, and in the majority of cases, they lodge in the lower lobes of the lungs.

The most common risk factor for pulmonary embolism is deep vein thrombosis (DVT), which accounts for about 50% of PE cases. The other risk factors account for the remaining 50% of the cases and include:

Symptoms and signs of PE are not exclusive; they can occur in a patient without pulmonary embolism, and clinicians can’t depend on them to confirm or exclude PE. Occult pulmonary embolism often remains undiagnosed in the presence of concomitant heart failure or pneumonia. In such conditions, patients usually fail to respond to the standard medical treatment of the concomitant condition.

Most common symptoms of pulmonary embolism are:

Most common signs of pulmonary embolism are:

Massive pulmonary embolism can be associated with RV dysfunction, which manifests as:

As deep vein thrombosis (DVT) is the most common cause of PE, symptoms, and signs of DVT have been found in more than 57% of cases of pulmonary embolism (PE). These include erythema, edema, tenderness, or a palpable cord in the calf or thigh.

Clinicians should realize that PE is very frequently asymptomatic, especially if it’s submassive PE, which can manifest as oxygen desaturation without concomitant symptoms or signs suggestive of pulmonary embolism.

As symptoms and signs of pulmonary embolism are variable and not specific, additional diagnostic tests are important to help diagnose PE.

ECG changes can be observed in a person without PE, which limits the role of ECG in PE diagnosis. The characteristic ECG abnormalities that are commonly present in massive PE and cor pulmonale are as follows:

Some ECG changes may indicate poor prognosis, such as:

Chest CT with contrast is an important noninvasive imaging modality used to diagnose PE. It is now considered to be the gold standard in PE investigation and has largely replaced the invasive modalities. Chest CT also provides very good images of both ventricles of the heart. RV enlargement may indicate a greater risk of death within the following 30 days as compared to a patient with PE without RV enlargement. 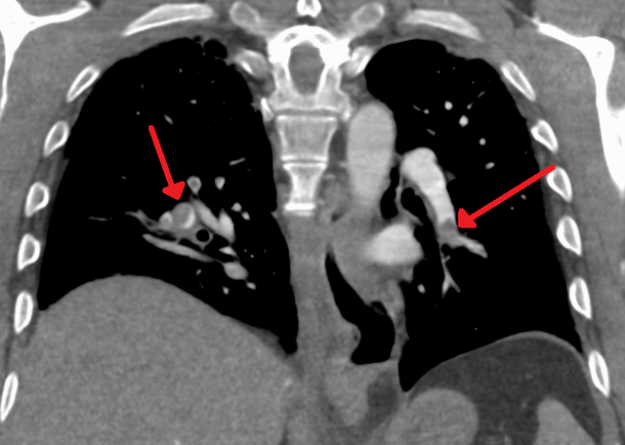 A lung scan is considered the second-line diagnostic modality for patients with pulmonary embolism who can’t tolerate IV contrast due to risk of contrast-induced nephropathy. The diagnosis involves intravenous administration of albumin labeled with gamma-emitting radionuclides, which then get trapped in the pulmonary capillary bed.

High-probability V/Q scan is defined as the presence of two or more segmental perfusion defects with normal ventilation.

Echocardiographic findings suggestive of pulmonary embolism are observed in only 30–40% of patients, especially those with massive PE, and include:

Normal veins are compressible when gentle pressure is applied via the ultrasound transducer. Loss of normal compressibility of the vein due to the effects of the acute thrombus is considered the primary criterion for diagnosis of DVT. The diagnosis of DVT can be confirmed largely by visualization of the homogeneous thrombus. Presence of DVT suggests diagnosis of pulmonary embolism, and the patient should receive PE treatment.

Radiographic changes in patients with pulmonary embolism are not specific and can also be observed in someone without PE. These include: 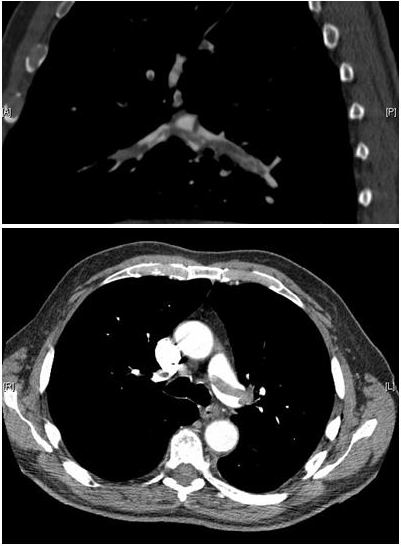 Image: CT pulmonary angiography images confirming the presence of a saddle embolus and substantial thrombus burden in the lobar branches of both main pulmonary arteries, by Aung Myat and Arif Ahsan. License: CC BY 2.0

This invasive modality involves percutaneous catheterization of the pulmonary artery or one of its branches, usually via the femoral vein, and then injection of contrast dye to delineate the pulmonary vasculature. Although it is considered the definitive diagnostic modality of pulmonary embolism, it has been replaced largely by spiral CT chest with contrast. Pulmonary angiography is now reserved for only two situations:

There are scoring methods that are useful in estimating the patient’s likelihood of DVT and pulmonary embolism (PE):

If pulmonary embolism is suspected in any patient, the clinician should focus first on stabilizing the patient, which requires:

The patient should receive high-flow oxygen (about 60–100%) if hypoxemia is present. Severe hypoxemia and respiratory failure may require intubation and mechanical ventilation.

If the physician suspects a pulmonary embolism, empirical anticoagulation using subcutaneous low-molecular-weight heparin is indicated, provided there is no excess risk for bleeding.

If the further evaluation of the patient excludes the presence of PE, then empirical anticoagulation should be discontinued, and an alternate diagnosis should be considered.

If the further evaluation of the patient confirms the presence of PE, then anticoagulant treatment should be initiated or continued, if it has already been empirically started.

Clinicians can easily use subcutaneous low-molecular-weight heparin (LMWH) without partial thromboplastin time (PTT) monitoring, or unfractionated heparin (UH) with target PTT of 50–70 seconds. LMWH should be administered for at least 5 days as a bridge, during which oral warfarin is given concomitantly. Stop the LMWH when the international normalized ratio (INR) target is reached (2–3).

IVC filters provide a guard barrier in the inferior vena cava preventing the large emboli from passing to the lungs. Placement of IVC filters is generally indicated if:

Embolectomy is the removal of the embolus. This can be accomplished surgically or by using a catheter directed to the involved pulmonary branch. Embolectomy is indicated when the patient has massive PE with hemodynamic instability, and thrombolytic therapy has failed or is contraindicated.

The mortality rate is highest in patients with echocardiographic findings of RV dysfunction or cardiogenic shock. Most people with RV dysfunction will attain normal RV function within 3 weeks. Pulmonary hypertension (PHTN) may persist in about 5% of the patients for about 2 years. A few patients may progress into overt RV failure and develop signs and symptoms of right-sided heart failure.