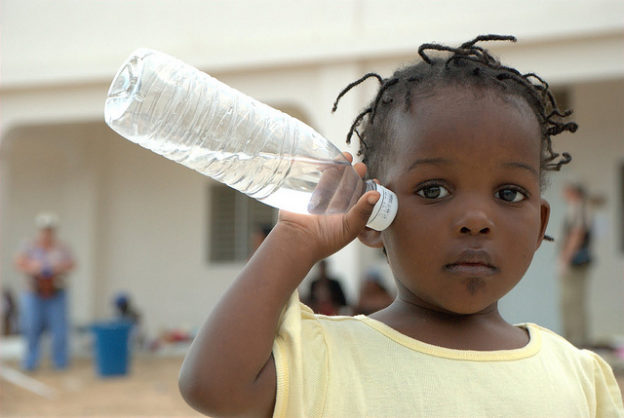 Image : “The human body requires a minimum intake of water in order to be able to sustain life before mild and then severe dehydration occurs.” by Pan American Health Organisation. License: CC BY-ND 2.0

Dehydration is defined as the excessive loss of water from the body. The balance between fluid intake and fluid loss from the body is greatly disproportionate in dehydration. The severity of dehydration ranges from mild to severe, and dehydration can be fatal when fluid loss exceeds more than 15% of the total body water.

Hypovolemia is defined as decreased circulatory volume due to blood or plasma loss.

Dehydration occurs because of decreased water intake, increased fluid loss, or both. In the elderly, impaired thirst sensation, chronic illness, fever, and sickness are common causes of decreased water intake. Common causes of increased fluid loss include vomiting, diarrhea, diuresis, and sweating. Working in hot weather without water and electrolyte replacement is another common cause of dehydration.

Dehydration can be classified according to serum sodium concentration into hypernatremic, hyponatremic, or isonatremic dehydration.

Apart from hypernatremia and hyponatremia, other electrolyte imbalances may also occur:

Signs and Symptoms of Dehydration

Most patients with dehydration present with:

Symptoms of mild dehydration include:

Symptoms of more severe dehydration include:

Signs of hypovolemia may also be present, including:

Dehydration is more clinically evident in the elderly, especially in hot weather, due to impaired thirst sensation. Elderly or hospitalized patients will show signs of irritability and, occasionally, delirium. 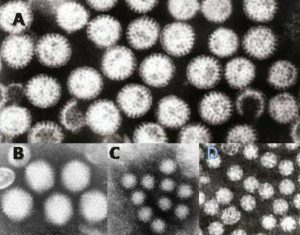 Image: “Electron micrographs of viruses that cause gastroenteritis in humans. A = Rotavirus (Rotavirus), B = Adenovirus (Adenoviridae), C = Norovirus (Norovirus) and D = Astrovirus (Astroviridae). They are shown at the same magnification of approximately x 200,000” by Dr Graham Beards at en.wikipedia. License: CC BY 3.0

If dehydration is not corrected, it will lead to renal injury from muscle breakdown and lactic acidosis.

Isotonic dehydration can result in elevated liver and pancreatic enzymes and a decreased glomerular filtration rate. Dehydration also can result in various electrolyte imbalances that will affect the clinical picture and prognosis. 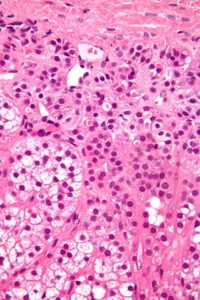 Urine volume will decrease unless the cause of dehydration is polyuria or diuretic use.

Specific gravity will be high and fractional excretion of sodium will also increase.

Hypotonic dehydration occurs when sodium loss is greater than water loss, resulting in a decrease in serum osmolality. This causes a shift of water from the extracellular space into the intracellular space. The cells swell and cerebral edema may occur.

Hyponatremia can be acute or chronic. If sodium loss occurs for more than 48 hours, it becomes chronic hyponatremia, and the body may adapt to this state. Sodium imbalance mainly manifests as neurological symptoms ranging from headaches, nausea, lethargy, and potentially confusion, coma, and death. 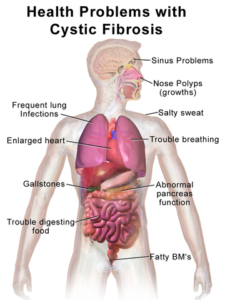 Serum sodium and serum osmolality will be less than the normal range.

Urine specific gravity will be decreased

Urine sodium excretion will be decreased.

Adequate hydration is recommended during all activities to prevent dehydration. Water intake is key to replacing fluid lost during exercise, in hot weather, during hospitalization, and in elderly patients with impaired thirst sensation.

Hospitalized patients should be carefully monitored for water intake and total fluid output for early detection of any fluid imbalances.

Children with vomiting and diarrhea should not be given plain water to replace fluid lost as this could lead to hyponatremia and water intoxication.

Intravenous fluids can be used for fluid replacement in unconscious patients with severe dehydration while plain water, sports drinks with electrolytes, and oral rehydration solutions are used for the prevention and treatment of mild dehydration. Electrolyte monitoring is mandatory for patients using diuretics for prolonged periods.

Treatment approaches vary according to patient age and severity of dehydration.

Treatment of the cause should always be considered, along with the treatment of symptoms and fluid replacement. Urine output should be monitored in hospitalized patients as an indicator of treatment efficacy and renal function recovery.

In severe dehydration, restoration of the blood volume is the main goal and is achieved with a fluid bolus of 20 mL/kg isotonic saline or Ringer’s lactate. Adults can use oral fluids if they are conscious and able to drink, otherwise, intravenous fluids should be used. Correction of electrolyte abnormalities should follow.

Infants and children with dehydration

Children are vulnerable to the effects of dehydration. Water deprivation can complicate gastroenteritis or fever and can lead to severe dehydration, with neurological manifestations and electrolyte imbalances.

Treatment options include fluid replacement orally if the child is conscious and able to drink. Water, fluids, and an oral rehydration solution can be used. In severe cases, intravenous fluids should be used.

Breastfeeding and a normal diet should be continued, as long as the treatment with fluid replacement prevents weight loss or developmental delays in infants.

A fluid bolus should be given to restore the blood volume according to severity, followed by maintenance therapy with 0.9% normal saline; 20 mL/kg of isotonic sodium or Ringer’s lactate is given to restore hydration. Oral intake should be encouraged as early as possible. 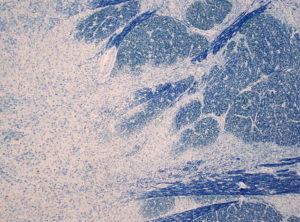 Image: “Loss of myelinated fibers at the basis pontis in the brainstem (Luxol-Fast blue stain)” by Jensflorian – Own work. License: CC BY-SA 3.0

Patients may present with acute cerebral edema. Early steps should include stabilization of the patient, securing of the airway, and maintenance of breathing and circulation.

In severe acute cases involving seizures and coma, management of hyponatremia is accomplished with 3% hypertonic saline. Correction of hyponatremia should start at a rate of 4–6 mEq/L/hour.

In chronic hyponatremia, correction of sodium concentration should be done using 0.9% normal saline at a rate of 10–12 mEq/L/day during the first 2 days. The rapid correction of hyponatremia will lead to central pontine myelinolysis, resulting in permanent injury to the brain stem, quadriplegia, and cranial nerve paralysis.

To calculate the sodium deficit:

The first step in treating hypernatremia is volume restoration with isotonic saline or Ringer’s lactate.

Following this, a slow correction of the hypernatremia at a rate of 10 mEq/L/24hours is required to avoid complications (cerebral edema and death). 5% dextrose in 0.9% sodium chloride can be used with frequent monitoring of the serum sodium every 4 hours.

Note: Antidiarrheal agents, routine antibiotics, and antiemetics should be avoided in this situation as they may worsen the condition.