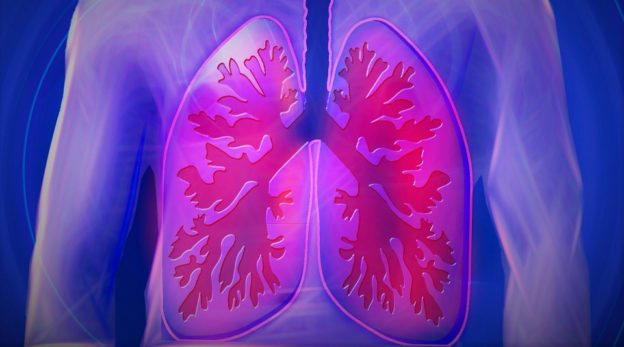 Location of the Lungs

The close connection between the lung and the heart results in the so-called cardiac impression, which in turn leads to the formation of a cardiac notch on the left lung (incisura cardiaca). The lingula is located at the caudal end of the cardiac notch. It represents a protrusion of the upper lobe and only exists in the left lung. The mediastinum and the two pleural cavities are situated in the thoracic cavity (cavitas thoracis), which is one of the three major body cavities. The other two major body cavities include the abdominal (cavitas abdominalis) and pelvic (cavitas pelvis) cavities.

Pulmonary expansion depends on breathing. Whereas the apex of the lung (apex pulmonalis) always reaches the upper thoracic aperture, the base of the lung (basis pulmonis) is closely connected to the diaphragm.

Shape and Structure of the Respiratory Tract

Overview of the respiratory tract. Image by Lecturio

The two lungs exhibit a slightly different external topography. The left lung contains two lobes (superior and inferior) separated from each other by an oblique fissure. The right lung consists of three lobes (superior, middle, and inferior lobes). The oblique and the horizontal fissures separate the three lobes. The fissures run deep into the pulmonary tissue and are covered by the visceral pleura projecting from the pulmonary surface.

The remainder of the pulmonary structure is identical. The lung is further divided into apex (apex pulmonis), base (basis pulmonis), surface, and border. The surface is covered with a serous coat, the visceral pleura, and is rose to grey in a healthy individual. Depending on the location and relationship with the thorax, the surface (facies pulmonis) is divided into costal, mediastinal, diaphragmatic, and interlobar surfaces.

The transition from visceral to parietal pleura occurs in the area of mediastinal surface. Thus, a fold appears as the pulmonary ligament in a dissected lung. The pleural cavity (cavitas pleuralis) is present between the two pleural sheets. It is filled with fluid and ensures effortless sliding of the sheets against each other. Also, the negative pressure (-5 cm H2O) in the pleural cavity holds the lung in place within the pleural cavities and ensures that it remains unfolded. In the absence of this negative pressure, the lungs collapse due to the inherent elasticity of its parenchyma (see pneumothorax).

In addition to the distinction between lobes, the individual segments in each lobe can be separated by the bronchial tree. The center of each segment contains a segmental bronchus as well as a segmental branch of the pulmonary artery and vein. Both lungs are subdivided into 10 segments each. Due to the presence of the heart, the left lung carries a cardiac notch (incisura cardiaca). As a result, the tiny segment VII is included in segment VIII.

The bronchial tree originates at the splitting of the trachea into the two main bronchi (principal bronchi) and delivers moistened air to the alveoli. It consists of conducting and respiratory airways.

Successive branching to form smaller bronchi that are divided further into:

The alveoli are little hollow cavities with a diameter of 150—500 μm. Two types of pneumocytes (alveolar epithelial cells) line the alveoli. Most epithelial cells are type I pneumocytes. They are connected via tight junctions and form the blood-air-barrier along with the basal membrane of the endothelial cells of the surrounding capillaries.

The larger type II pneumocytes (= niche cells) are rare and secrete a surfactant. The surfactant decreases the surface tension of the alveoli and prevents them from collapse. The overall alveolar surface for gas exchange is 100-120 m2, roughly the size of a soccer field. 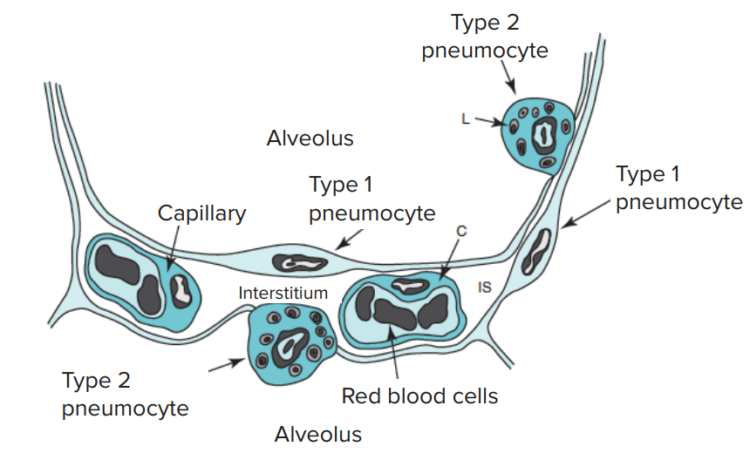 The pulmonary hilum represents the vascular entrance and exit in the lung. Depending on the function, the public vessels including pulmonary arteries and veins, which are responsible for gas exchange, can be distinguished from private vessels supplying the lung.

The bronchial arteries supply blood to the bronchi and the pulmonary connective tissue. They originate in the thoracic aorta (and also from the internal thoracic artery, rarely). They traverse the bronchial branches, ending almost at the level of the respiratory bronchioles. They anastomose with the branches of the pulmonary arteries, and together, supply the visceral pleura of the lung.

Much of the oxygenated blood supplied by the bronchial arteries is returned via pulmonary veins rather than the bronchial veins. As a consequence, blood returning to the left heart is slightly less oxygenated than blood found at the level of the pulmonary capillary bed. This phenomenon is referred to as a physiologic shunt. 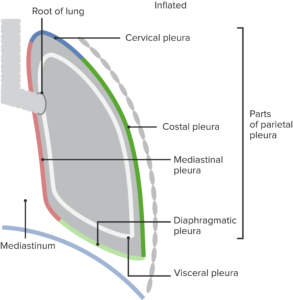 Additionally, the pulmonary plexus receives afferent vegetative fibers, which mostly comprise strain sensors in the bronchial wall. In the event of extreme stretching, these fibers inhibit the respiratory center via the Hering-Breuer reflex. Several nerves ensure sensory innervation of the parietal pleura. The costal pleura is supplied by the intercostal nerves, whereas the mediastinal part is innervated by the phrenic nerve. In contrast to the parietal pleura, the visceral pleura is not innervated.

A rhythmic change in thoracic diameter occurs during breathing. Under negative pressure in the pleural cavity, the lung alters the thoracic volume. During inspiration, two mechanisms ensure enlargement of pulmonary volume: First, the expansion of the thorax via external intercostal muscles elevates the ribs, and second, the contraction of the diaphragm. The diaphragm is the main muscle used in shallow breathing, and the only muscle active during sleep.

The costodiaphragmatic recess of the pleural cavity is reserved for pulmonary expansion during the course of inspiration. Thus, the edges of the lung can be moved significantly caudally. The costomediastinal recess, which is situated at the border between the anterior chest wall and the mediastinum, is another reserve space. The phrenicomediastinal recess between the diaphragm and pericardium does not represent a significant reserve space.

In contrast to inspiration, expiration is mainly a passive process, which is triggered by the elastic recoil forces of the lung and the thorax. However, during forced expiration, muscular activity results in rapid reduction in thoracic diameter. 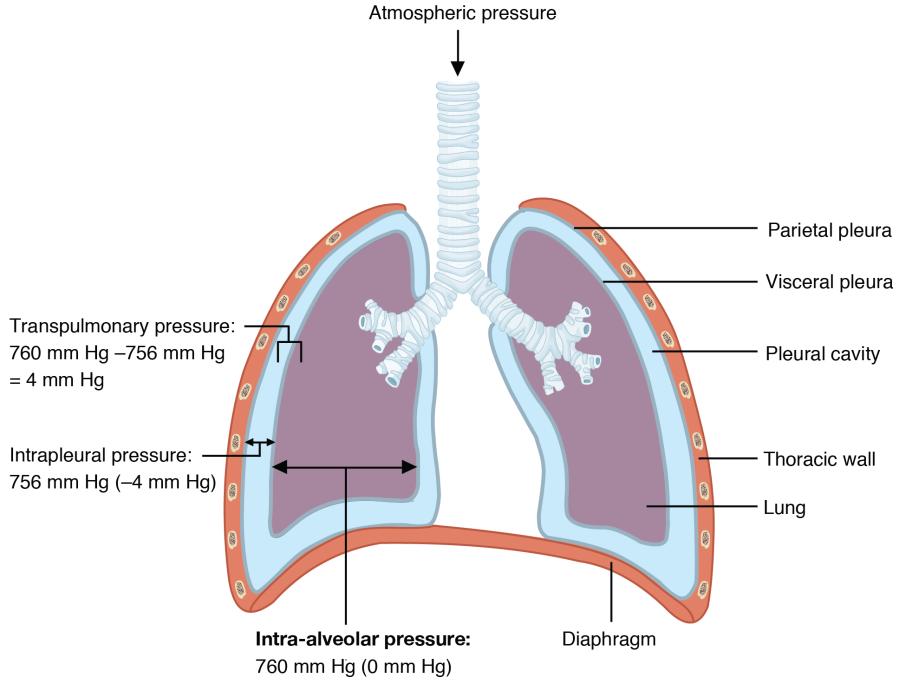 Pulmonary examination is a part of the clinical curriculum in medical studies. However, an overview is provided here.

Clinical examination is based on anamnesis

Imaging methods are necessary in order to confirm a tentative diagnosis of pneumonia.

Invasive measures such as bronchoalveolar lavage with biopsy is indicated in case of a suspected bronchial carcinoma. Pulmonary function parameters are evaluated via ergospirometry. 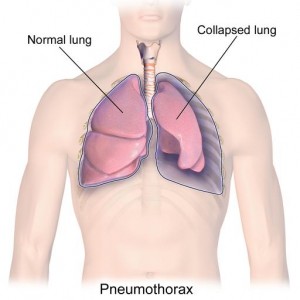 Image: ‘Pneumothorax. See a full animation of this medical topic’ by BruceBlaus. License: CC BY 3.0

Pneumothorax is defined as the accumulation of air between the visceral and the parietal pleura. As a result, the negative pressure in the pleural cavity is lost, which leads to pulmonary collapse on the affected side. A closed pneumothorax lacking connection with the external air can be distinguished from an open pneumothorax.

Depending on the etiology, pneumothorax can be classified into spontaneous, traumatic, and iatrogenic types. Spontaneous pneumothorax often occurs in young, asthenic men and is often caused by the rupture of congenital emphysemic bullae just under the pleura. Clinical symptoms of pneumothorax include dyspnea, piercing chest pain on the affected side, and asymmetric motion of the thorax (decreased and trailing motion of the affected side). Tension pneumothorax is a possible complication. In this case, a mediastinal shift occurs toward the healthy side leading to compression of the healthy lung. The increased intrathoracic pressure interferes with the venous return to the heart.

Pneumonia is an acute or chronic inflammation of the alveolar space and/or the interstitial lung tissue. It is one of the most frequent deadly infectious diseases in industrialized countries.

Pneumonia can be classified into several types:

Similar to asthma, COPD is an obstructive lung disease. However, the obstruction is multifactorial. It is triggered by ruptured alveoli and formation of air sacs called bullae, which compress the normal lung tissue. It is characterized by chronic bronchitis, and overproduction of mucous and bronchoconstriction (due to the overreaction of the airways as in asthma). The obstruction occurs progressively over several years and is associated with chronic inflammation of the lung as a reaction to chemical noxae such as tar from the smoke.

According to the World Health Organization, chronic bronchitis exists if a patient manifest cough with sputum every day for at least three months each year over a period of two consecutive years.

Pulmonary fibrosis is an interstitial constrictive lung disease, which is caused by an increase of fibrous connective tissue in the lung. Causes include inhalation of pollutants such as inorganic or organic dust and systemic diseases including sarcoidosis or collagenosis. Unlike COPD, which is associated with increased lung volume, pulmonary fibrosis is associated with decreased lung volume.

Bronchial carcinoma is the most frequent cause of death due to cancer in men and the third most frequent cause of death in women (after breast and colon cancers). The main risk factor is smoking tobacco, which accounts for 85% of bronchial carcinomas. The duration and extent of cigarette consumption determine the risk for bronchial cancer. The so-called pack-years are a measure of this risk. They are calculated by multiplying the number of cigarette packs smoked daily by the number of years the person has smoked.

Adenocarcinomas are located peripherally and are the most frequent form of lung cancer in non-smokers. Squamous cell carcinomas and SCLC are mainly localized to the central areas of the lung, which interfere with pulmonary resection.

One thought on “The Lungs — Anatomy and Pathology”