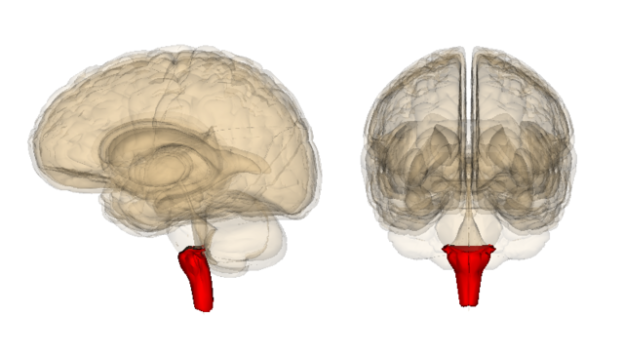 Organization and Blood Supply of Medulla

The medulla oblongata is the terminal segment of the brain stem, which continues, at the foramen magnum, as the spinal cord. The cross-section shows the structures at the level of the pyramids and the inferior olivary nucleus. 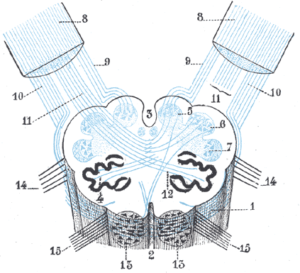 Hypoglossal nuclei and nerve fibers: arise from the meeting point of the pons and medulla.

Medial lemniscus: mediating position, vibration, and fine touch sensations. The posterior column fibers from the gracile and cuneatus nuclei cross, as internal arcuate fibers, and continue further in the contralateral medial lemniscus to the thalamus.

Vestibular nuclei: located on the dorsolateral regions of the medulla and pons, it is comprised of four sub-nuclei. It gives rise to the vestibular component of the vestibule-cochlear nerve (eighth cranial nerve), which is important for maintaining balance, orientation, and proprioception of the head and body in the space. The sub-nuclei are:

Spinal nucleus of the trigeminal nerve: gives rise to the trigeminothalamic tract, which mediates pain and temperature sensations from the face.

Solitary nucleus: the rostral part mediates taste sensation, while the dorsal segment is responsible for visceral sensations and the carotid reflex.

Descending sympathetic fibers: proceed towards the ciliospinal center of Budge in the cervical spinal cord.

Spinothalamic tract: mediates pain and temperature sensations from the body to the thalamus. 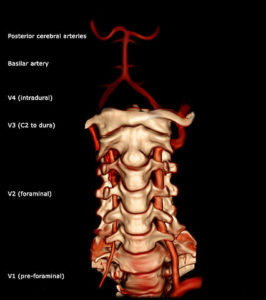 The medulla’s blood supply comes from the vertebrobasilar trunk and its branches. The two vertebral arteries join to form the basilar artery. Three types of end arteries supply the medulla:

The major long circumferential vessels and their vascular territories are:

Depending on the vascular territory involved, occlusion of specific branches may lead to specific symptoms and manifestations. 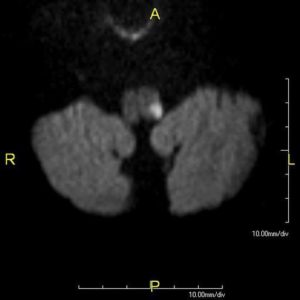 Damage to the lateral medulla leads to lateral medullary syndrome. Gaspard Vieusseux first described it in 1808. It is also known as ‘Wallenberg syndrome.’ The following variants are of interest:

The lateral medullary syndrome may be complete or partial, depending on the vessel and the subsequent vascular territory involved.

There are very few clinically and pathologically proven cases of medial medullary syndrome. Lateral medullary syndrome is more common. According to a study, the highest incidence is seen in middle-aged males at 50-60 years.  Hypertension, diabetes, smoking, and atherosclerosis are the major risk factors.

Infarction of the lateral medulla, following insult to the PICA, the vertebra-basilar trunk. or brain stem perforators. gives rise to lateral medullary syndrome.

The ectogenesis is similar in both syndromes.

Based on the location of the infarct on imaging, there are three types of medial medullary syndrome:

Symptoms and Diagnosis of Medullary Syndrome

Brain stem strokes are acute ischemic events, characterized by vomiting, vertigo, diplopia, headache, ataxia, hiccups, and dysarthria. Facial paresis, though rare, can be seen due to the involvement of few aberrant descending fibers. It can cause many system ailments, such as vestibule-cerebellar, bulbar, sensory, respiratory, or autonomic systems.

More often due to a systemic cause, such as hypertension and atherosclerosis, medial medullary syndrome is often bilateral with a poor prognosis.

The tracts involved, with resultant specific symptoms in medial medullary syndrome, can be summarized in the following manner:

Clinical recognition of lateral medullary syndrome depends on identifying the triad of ipsilateral hyperalgesia of the face, Horner’s syndrome, and ipsilateral ataxia.

After assessing the present symptoms, a neurological examination should be performed to differentiate between true stroke and mimicking stroke by this syndrome. HINTS (head- impulsive-nystagmus- test of skew) is a three-step oculomotor examination for determining the presence of infarction in lateral medulla.

Imaging studies are the most common preliminary investigations. CT brain (plain) is the initial investigation, mainly to rule out hemorrhage. MRI diffusion detects infarcts within a few minutes. CT and MRI scans determine the infarction’s exact location. The etiology can be detected by performing studies like CT angiography, MRI angiography, and arterial neck Doppler. For large vessel disease, digital subtraction angiography is the gold standard.

Therapy and Prognosis of Medullary Syndrome

Management is usually conservative. Blood pressure regulation with cerebral perfusion maintenance must be established immediately. In the case of ischemic stroke, blood thinners, like heparin or warfarin, reduce the blockage in the arteries supplying the lateral side of the medulla. The long-term outlook depends on active rehabilitation and symptomatic treatment.

Repetitive transcranial magnetic stimulation will rehabilitate patients with dysphagia due to Wallenberg syndrome.

Patients with lower cranial nerve weakness due to lateral medullary syndrome are prone to aspiration pneumonia. They might benefit from Ryle’s tube feeds or diverted feeding techniques such as gastrostomy. Patients who require tracheostomy usually have guarded prognoses.

The role of surgery, though minimal, can be summarized as:

Medullary syndromes are lethal in many patients. Those who survive are usually afflicted by central post-stroke pain.

Lateral medullary syndrome is commonly due to PICA or vertebral artery occlusion. It manifests as a triad of ipsilateral ataxia, ipsilateral Horner’s syndrome, and ipsilateral hyperalgesia of the face. Loss of pain and temperature sensation in the contralateral half of the body is seen.

These medullary syndromes are diagnosed based on the clinico-radiological correlation. Management is usually conservative, with high mortality and morbidity.