Definitions and Classification of Seizures

Epilepsy is a group of neurological disorders characterized by the recurrence of seizures. A seizure is a brief surge of uncontrolled, abnormal electrical activity in the brain which may produce a physical convulsion in some individuals or minor physical signs in others. Yet other people may suffer thought disturbances or a combination of symptoms. Many structures and processes are involved in the development of a seizure, including neurons, ion channels, receptors, glia, and inhibitory and excitatory synapses.

Epilepsy is defined by any of the following:

Anti-seizure or antiepileptic drugs, therefore, are targeted to inhibit neurotransmission. This can be achieved via blocking sodium or calcium excitatory channels/currents, enhancing the inhibitory activity of gamma-aminobutyric acid (GABA), or by blocking glutamate receptors.

Seizures can be primary (idiopathic) or secondary to a specific cause such as trauma or a tumor. Most antiseizure drugs require dose adjustment in patients with liver and/or kidney failure, and some have considerable drug-drug interactions.

Seizures are clinically classified as partial or generalized:

The meanings of some of the terms involved are as follows:

As already mentioned, the main effect of antiseizure drugs is to suppress the abnormal electrical activity at the epileptic foci in the brain. This is achieved by many different mechanisms. 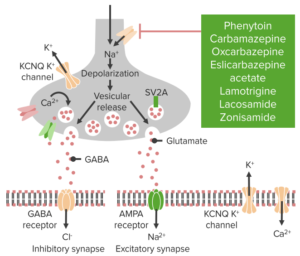 The block of voltage-gated sodium channels in neuronal membranes prevents Na+ influx, which results in decreased axonal conductance by increasing the refractory period of the neuron. 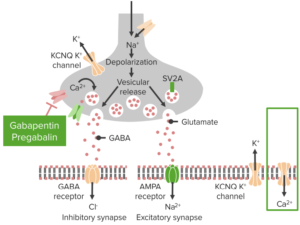 Notable adverse effects: hyponatremia (partly due to increased responsiveness of collecting tubules in the kidney to ADH), dizziness, drowsiness, and nausea.

This is a prodrug and converted to active monohydroxy derivative (MHD) metabolite. It shows fewer drug interactions than carbamazepine because it is a less potent inducer of CYP3A and UDP glucuronosyltransferase.

Hyponatremia is a significant adverse effect (probably higher than that in carbamazepine).

Newer antiseizure drugs have somewhat fewer neurotoxic and systemic side effects than the older/standard ones.

Other points on toxicity:

buseful in cases accompanied by GTC or myoclonic seizures

calone or as an adjunct

dmain side effects include drowsiness and sedation; tolerance may develop with longer use

Status epilepticus is a series of epileptic episodes (usually tonic-clonic) without recovery of consciousness between attacks. It is a life-threatening emergency.

Infantile spasms are an epileptic syndrome characterized by myoclonic jerks; however, the manifestation varies. 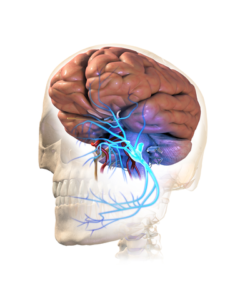 1. A 37-year-old female with a BMI of 29.6 is diagnosed with absence seizures. Which of the following is the most suitable drug?

2. A 17-year-old male presented to the emergency department with fever, vomiting, facial edema, and an erythematous rash over his face, neck, chest, and back. He had been diagnosed with juvenile myoclonic epilepsy two weeks ago and had been started on an antiepileptic drug. Which of the following drugs could be responsible?

3. A 68-year-old woman was newly diagnosed with epilepsy. Considering the adverse effect profile, especially in an elderly person, which of the following drugs should be prescribed?

Epilepsy and Seizures via medscape.com