Gallstones are the stones in the gallbladder that are formed when bile fluid becomes hardened inside the gallbladder. The stones can also be as a result of cholesterol or pigment hardening or a combination of both.

Biliary colic is the pain in the right upper quadrant of the abdomen that results when a gallstone temporarily impacts the cystic duct during a contraction. It is as a result of gallbladder contractions.

Acute cholecystitis occurs when there is a prolonged obstruction of the cystic duct and secondary bacterial infection of the gallbladder resulting in right upper quadrant abdominal pain, fever, and abdominal tenderness.

The majority of gallstones are cholesterol-based and are asymptomatic. When symptomatic, the most common presentation is recurrent right-upper-quadrant abdominal pain that is associated with nausea and vomiting and could have a temporal relationship with high-fat content food intake.

The treatment is surgical removal of the gallbladder (cholecystectomy). The current consensus is to treat symptomatic gallstones only. However, in certain populations, prophylactic cholecystectomy is offered, such as children with sickle cell disease. It is also indicated for spinal injury patients, persons with calcified/nonfunctional gallbladder as well as those whose gallstones have enlarged past two centimeters.

Bile is formed by the liver and is stored and concentrated in the gallbladder, which contracts after fatty meals to deliver the bile into the intestine. Bile is mainly composed of cholesterol, bile salts, phospholipids, and inorganic acids and helps in fat emulsification and absorption in the small intestine.

Precipitation of bile salts and cholesterol gives rise to gallstones. Formation of a nadir of insoluble cholesterol or mucus is the primary step followed by multiple layers of precipitation until the stone is formed. This may be due to either over-concentration of bile, or over-secretion of mucus or bile stasis.

Bile stasis is clinically significant in diabetic patients who have intestinal hypomobility, comatose patients in the ICU or under total parental nutrition, pregnant women and those with oral contraceptive use.

20 % of the population will have biliary complaints and 20 % of patients will have serious complications, ranging from gallstones to pancreatitis and intestinal obstruction.

The size of gallstones plays an important role in the symptomatology of the patient. Larger stones result in the typical right-upper quadrant pain experienced in gallstones, while smaller ones tend to lodge down and block the pancreatic duct causing pancreatitis. 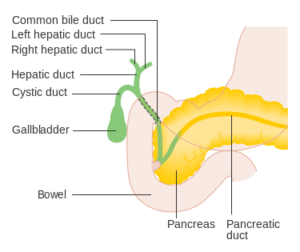 While gallstones are found among all age groups, they are more common in Females, who are Fertile, obese (Fatty) and in their Forties (the 4 Fs). In one study, it was estimated that 25 % of women older than 60 years are expected to have gallstones.

The prevalence of gallstone increases with age and women are twice as likely to develop gallstones. This is thought to be due to a higher cholesterol blood level that is related to high estrogen states, such as in pregnancy or when on combined oral contraceptives.

Additionally, gallstones are more common in certain races, such as Native Americans, Hispanics, followed by North Americans, Europeans and, finally, Asian populations. Finally, certain drugs have been linked to an increased risk of gallstones, such as fibrates and chronic use of proton pump inhibitors.

Around 10,000 deaths are attributed to gallstones in the US annually which arise from gallstone complications, gallbladder cancer and complications in cholecystectomy. On international standards, this rate may be higher due to liver flukes infestations.

Cholesterol stones are the most common gallstones. They develop in women more often than in men, with risk factors like obesity, cystic fibrosis, clofibrate, and malabsorption. Estrogen hormone makes women susceptible to gallstones during pregnancy as well as through the use of oral contraceptives.

Cholesterol gallstones are formed when bile cholesterol concentration increases. These patients are expected to have excessive cholesterol biosynthesis, the inability to convert cholesterol to bile acids, or interruption of the enterohepatic circulation.

Obese people and patients with a genetic predisposition to hyperlipidemia, such as familial hypercholesterolemia have excessive cholesterol biosynthesis. Additionally, diabetics are known to have hypertriglyceridemia, which predisposes them to cholesterol gallstones.

Older age and higher estrogen states have been linked to a decreased cholesterol 7-alpha-hydroxylase enzyme activity, which results in the diminished conversion of cholesterol to bile acid and eventually, cholesterol becomes less soluble in the bile and stones form.

Interruption of the enterohepatic circulation could happen after gastrointestinal surgery or overnight fasting.

Pigment gallstones are the result of excessive bilirubin, unlike cholesterol gallstones. Excessive bilirubin is associated with hemolysis, cirrhosis, and infection with beta-glucuronidase producing bacteria. Pigment stones are more likely to be calcified and visible on plain X-ray. 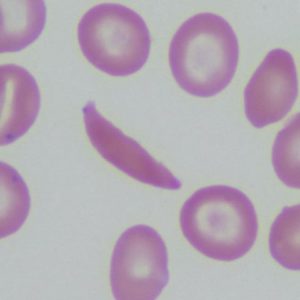 The majority of patients with gallstones are asymptomatic but these patients can have non-related gastrointestinal symptoms such as flatulence, irritable bowel syndrome, postprandial distress, heartburn, bloating, constipation or diarrhea and gallstones are incidentally identified on ultrasonography.

Symptomatic patients, on the other hand, are more likely to present with right-sided upper quadrant abdominal pain that describes a more specific picture of biliary colic. Biliary colic results when a stone temporarily impacts the cystic duct during a contraction. The pain reaches maximum intensity in the right upper quadrant in 20 minutes after the ingestion of a fatty meal and eventually resolves in one to two hours. It is intense and not truly colicky in nature. Less specific symptoms include vomiting, nausea, dyspepsia, and fat intolerance.

Acute cholecystitis occurs when there is a prolonged obstruction of the cystic duct and secondary bacterial infection of the gallbladder. Chronic gallbladder stones put the patient at an increased risk of gallbladder wall fibrosis and cancer.

Laboratory investigations can help exclude an acute inflammatory process but are usually unhelpful in simple biliary colic. Abdominal X-rays, ultrasonography, computed tomography, magnetic resonance imaging, and nuclear scintigraphy, are all used in the diagnostic workup of patients with gallstones. Auscultation, palpating the abdomen, as well as obesity should also be noted when making a diagnosis.

Acute cholecystitis is associated with neutrophils leukocytosis in two-thirds of the patients. Liver enzymes might be slightly impaired in acute cholecystitis. Amylase levels and lipase are also important to exclude acute pancreatitis, especially if the ultrasonography shows small gallbladder stones.

Common bile duct stones, another complication of gallstones, result in an increase in alanine and aspartate aminotransferases levels at first and followed by an increase in bilirubin.

The blood test will focus on the blood count, liver function, amylase as well as lipase components. 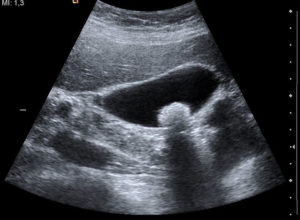 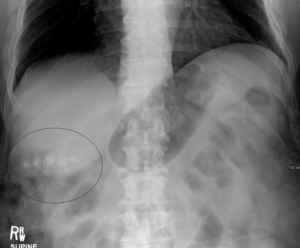 The majority of gallstones are radiolucent but around two-thirds of pigment gallstones can be seen on abdominal X-rays due to higher calcium content.

CT abdominal scanning is used to exclude other causes of abdominal pain when one is not certain about gallstones as the etiology. It has a low sensitivity for gallstones and is expensive if compared to the more specific and faster ultrasonography scan. 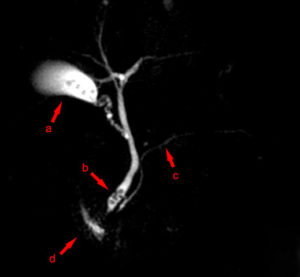 Image: “MRCP: (a) gallbladder with gallstones, (b) stones in the bile duct, (c) pancreatic duct, (d) fluid in duodenum.” by Hellerhoff – Own work. License: CC BY-SA 3.0

MRCP has excellent sensitivity for the diagnosis of gallstones anywhere in the biliary tract. However, it is currently reserved for patients with complicated common bile duct disease or when there is high clinical suspicion but the ultrasonography is negative, due to being expensive and the need for specialized software. The figure demonstrates multiple common bile duct stones on an MRCP study.

HIDA scintigraphy is only useful in patients with acute cholecystitis with an obstructed cystic duct. A recent meta-analysis showed that patients with a positive HIDA scan result and negative ultrasonography will always benefit from cholecystectomy.

Ursodeoxycholic acid (ursodiol) can be used to dissolve pure cholesterol stones in asymptomatic patients, or in patients who cannot undergo surgical intervention. Treatment with ursodiol is successful with small stones and should be attempted for at least 6 months. Unfortunately, the recurrence rate after the medical dissolution of gallstones is high and is up to 50 %. 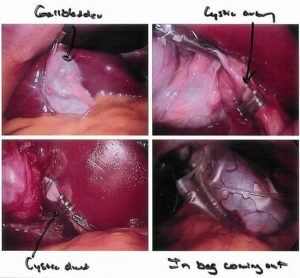 Image: “Pictures of my cholecystectomy in progress taken through the laparoscope.” by User:Pschemp. License: CC BY-SA 3.0

Cholecystectomy is indicated in any patient with symptomatic gallstones unless that patient’s age or history of chronic disease puts him at high risk.

Traditional open cholecystectomy uses a large subcostal incision to remove the gallbladder, which is associated with increased recovery time and postoperative complications when compared to the modern laparoscopic technique.

It is effective in pulverizing stones into smaller fragments that can pass through the body painlessly.

Cholangitis is the inflammation (infection) of the biliary tree after obstruction irrespective of the cause of obstruction. Charcot triad is very helpful for its diagnosis that consists of fever, right upper quadrant pain, and jaundice. Reynolds pentad of hypotension and altered mental status with the triad is a bad prognostic indicator for severe biliary infection.

Organisms migrating to the biliary tree from the intestine through the portal vein or the biliary tract are responsible for the conditions. E. coli, Pseudomonas, Proteus, Klebsiella, and enteric streptococci can be isolated.

The chronic gallstones irritate the gallbladder wall leading to extensive calcium deposition. This brittle gallbladder with high calcium content is called porcelain gallbladder and has a high association with gallbladder adenocarcinoma. It is often an incidental finding and cholecystectomy is usually performed due to a higher risk of cancer.

Impaction of a gallbladder stone in the cystic duct can cause external compression and subsequent obstruction of either the common bile duct or the hepatic duct. Obstruction of both ducts can result in necrosis of the wall, fistula or scar formation and obstructive jaundice will develop. Chronis obstruction in the cystic duct, as well as gallbladder tumor, may develop in the right upper abdomen in a patient without jaundice if there is formation of a palpable mass.

It is due to blockage of gallbladder or mucosal inflammation which results in the gallbladder distending due to a mucoid fluid that is clear and uninfected. It requires cholecystectomy but if it is related to Kawasaki disease it usually resolves itself.

Asymptomatic gallstones should not be treated except for certain populations that are known to be at high risk for the development of symptomatic disease and complications, while symptomatic patients should undergo a cholecystectomy. Laparoscopic cholecystectomy is superior to open cholecystectomy but, in a few cases, the surgeon might need to convert to an open procedure.

Finally, patients with symptomatic gallstones, who are not possible candidates for surgical intervention, should be prescribed a gallstone dissolution agent if the stones are expected to be purely made of cholesterol.