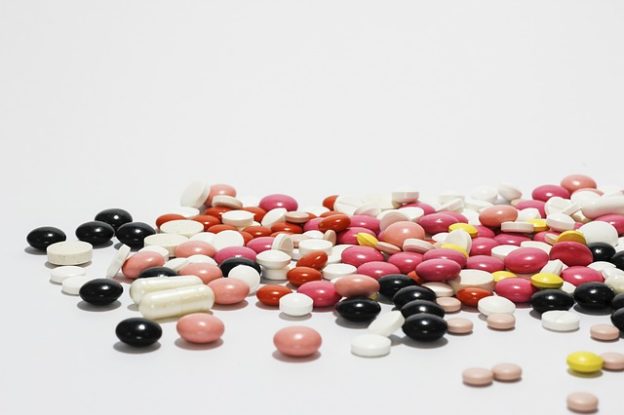 The pH and pKa are important in determining the ionization of the drug. In regional anesthesia, for example, when the drugs are injected into the infected tissues, the local pH is low, which leads to a more ionized form. Thus, there is reduced diffusion into the membrane and slow clinical effect. This can be facilitated by adding bicarbonate to the local anesthetic, thereby leading to a faster onset of action.

Structurally, local anesthetics have a lipophilic aromatic ring, which is connected to a hydrophilic group by an intermediate chain, which can be an amide or an ester. 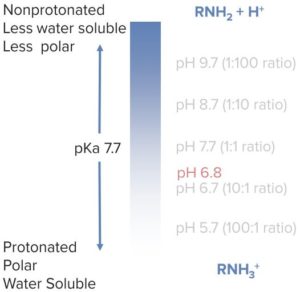 Professional chlorine, benzene, and cocaine are tetra packed. It is also easy to remember that amides have names with more than one letter ‘i’ while esters have one.

Mode of Action of Local Anesthetics

Local anesthetics act primarily by inhibiting the voltage-gated sodium channels (they also inhibit potassium channels) on the neuronal membrane and thus block peripheral nerve conduction. They bind more to the open or inactive sodium channels than those in their resting phase.

Usually, local anesthetics are absorbed rapidly into the blood from the site of injection.

The duration of the action is limited but can be prolonged if the blood flood is reduced (e.g. by concomitant use of a vasoconstrictor such as epinephrine).

Distribution: a lot of factors are to be considered when analyzing the local and systemic distribution: tissue blood flow (and factors affecting that), patient position, etc.

Amides are mainly metabolized by the liver, and are reduced in the presence of potent CYP450 inhibitors, such as ketoconazole. Since PABA is not produced, allergic reactions are rare.

Plasma half-life: the half-life is short for esters (1–8 min) because metabolism by plasma cholinesterase is faster, whereas it is longer for amides (lidocaine and prilocaine < 2 h; others 3–4 h) because liver enzymes are relatively slower to act.

Clearance: excretion of the uncharged drug is limited because of poor water solubility.

Placental transfer: esters do not cross the placenta in significant amounts as they are subjected to rapid hydrolysis. For amides, the rate of transfer is dependent on protein binding: the higher the binding (e.g., bupivacaine), the lower the transfer.

Pharmacological Properties of Some Local Anesthetics

The symptoms and signs of toxicity of local anesthetics, including the timing of onset, are somewhat unpredictable. A high level of suspicion is advised, especially in patients who have alterations in mental or cardiovascular status following the injection of a local anesthetic.

Central nervous system effects: can be of excitation or depression, and can be initially subtle and nonspecific – for example, light-headedness, sedation, restlessness, and nystagmus.

Cardiovascular effects: most local anesthetics (except cocaine) are vasodilators. (Mepivacaine has low to no vasodilator activity.) They may exacerbate existing heart conditions and lead to heart block or other electrical conducting system dysfunctions of the heart.

Cardiac toxicity is somewhat enhanced in the presence of hyperkalemia as there is increased depolarization, which means that more channels are in the inactive state.

Dosage in the elderly (of the drug, as well as of the concomitant epinephrine) should be somewhat reduced as they usually have a slightly compromised liver function.

Notes:
*ability to act on the superficial nerves when applied to the mucous membrane.

Infiltration of local anesthetics via uptodate.com