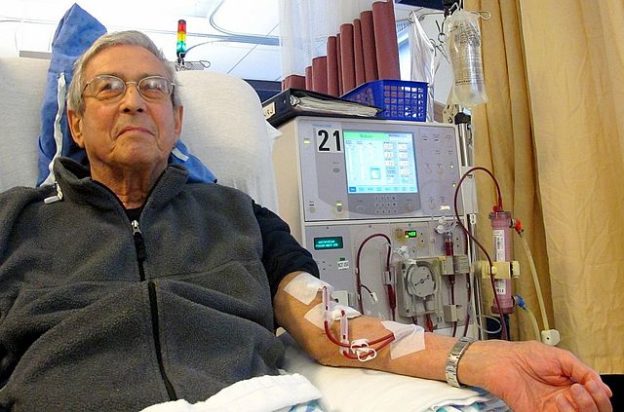 Rhabdomyolysis is a complex medical condition that is characterized by the rapid dissolution of damaged or injured skeletal muscle. The disruption of the integrity of the skeletal muscle cell wall leads to the release of key intracellular components, including creatine kinase, aldolase, lactate dehydrogenase, myoglobin, and electrolytes. The release of these intracellular products might be associated with electrolyte imbalances, acute renal failure, or disseminated intravascular coagulation.

According to estimates, half of the children who develop acute rhabdomyolysis will develop AKI.

Rhabdomyolysis can occur in patients secondary to crush injuries. These patients are prone to developing AKI due to extensive myoglobin release, thus, requiring hemodialysis. Crush injuries can occur due to earthquakes, mine accidents, motor/train accidents, building collapse, and bombings, etc. Road traffic accidents are the most common cause of rhabdomyolysis, causing direct injury to the muscles. Acute renal failure (ARF) could result due to mechanical obstruction of the renal tubules by myoglobin.

Prolonged immobilization due to hospitalization, paralysis, stroke, or long-duration surgeries also causes rhabdomyolysis as a result of prolonged compression. Although 1 hour of continuous compression is considered sufficient, even compressions lasting 20 minutes can cause rhabdomyolysis.

Marathon runners, athletes, and workers, who are prone to excessive muscular exertion, are at a higher risk of developing rhabdomyolysis, as excessive muscle activity can result in muscle damage and rhabdomyolysis. Patients who are affected by electrical injuries are also prone to develop this condition primarily due to continuous muscular contraction (tetany), and also due to direct electricity-related muscular injury (lightning strikes or electrocution). Seizures and alcohol withdrawal syndrome are also associated with muscular exertion injury.

Since the introduction of statins, many reports have pointed towards an association between the use of statins and rhabdomyolysis. The main risk factors for statin-induced rhabdomyolysis can be classified as endogenous or exogenous.

Exogenous risk factors can be summarized as follows:

Muscle hypoxia due to major artery occlusion can be associated with muscle damage and rhabdomyolysis. Malignant hyperthermia, heatstroke, hypothermia, and neuroleptic malignant syndrome can cause rhabdomyolysis.

Other causes of rhabdomyolysis include the abuse of alcohol, amphetamine, methadone, LSD, heroin, and cocaine. These substances may lead to rhabdomyolysis due to:

Raver’s hematuria is reported in individuals who indulge in prolonged dancing leading to the development of rhabdomyolysis, especially if a history of amphetamine consumption is present.

The following drugs can cause rhabdomyolysis:

Despite the etiology, the pathophysiology of rhabdomyolysis is more or less consistent.

Note: Generally, the channels and ion pumps located on the sarcolemma maintain a high K+ concentration and low Na+ and Ca2+ concentrations within the cell.

Rhabdomyolysis-related damage to the sarcolemma or shortage of energy (ATP) can lead to the dysfunction of the ion channels and pumps, resulting in increased calcium influx into the cell. This, in turn, activates calcium-dependent phospholipases and proteases, leading to the destruction of the structural proteins. Following this cellular destruction, several cellular components and proteins (myoglobin, creatine kinase, aldolase, and lactate dehydrogenase) enter the circulation, damaged capillaries, and cause leakage and edema.

Myoglobin is the oxygen-carrying protein present in skeletal muscle and is usually bound to plasma proteins. In rhabdomyolysis, myoglobin levels exceed the binding capacity of plasma proteins, leading to unbound myoglobin in the circulation. This free myoglobin can cause AKI via different mechanisms.

Note: Most importantly, free myoglobin is precipitated in the glomerular filtrate and causes mechanical obstruction of the tubules.

Hyperuricemia and intraluminal cast formation also contribute to acute renal involvement. Intraluminal cast formation occurs when myoglobin binds to the Tamm-Horsfall protein, especially in the presence of acidic urine. Additionally, hypovolemia, vasoconstriction, and the direct deleterious effect of myoglobin on renal tissue also contribute to the AKI in rhabdomyolysis. 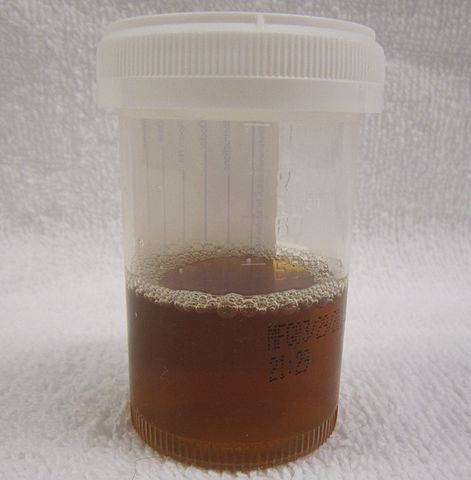 Approx. 50% of patients with rhabdomyolysis present with the classic triad of symptoms which includes myalgia, weakness, and dark tea or cola-colored urine. However, these classical symptoms may be absent in 50% of patients. These symptoms are non-specific and a definite diagnosis cannot be made on these findings.

Usually, a history of medication, trauma, or alcohol/drug abuse is present. Patients may also present with features of AKI. The mortality rate is high in patients with rhabdomyolysis complicated by AKI, especially in the presence of a high creatine kinase level.

Muscle weakness is seen, especially in the proximal leg. Severe hyperkalemia and hypocalcemia can cause cardiac arrhythmias. Compartment syndrome may be present, especially in the lower limbs. During fluid resuscitation, the edema of the lower limbs may get worse. The intracellular components released into the circulation may activate the coagulation pathway, leading to disseminated intravascular coagulation in a few cases.

Apart from history and clinical examination, the diagnosis of rhabdomyolysis is based on an elevated serum creatine kinase of more than five-fold the upper limit of the normal range. A creatine kinase test is the most reliable and sensitive indicator of kidney damage. Creatine kinase (CK-MM subtype) usually starts increasing 2–12 hours after muscle injury, peaks at 24 hours, and returns to baseline values in 3–5 days. A creatine kinase level above 15,000 U/L indicates renal damage and renal failure.

Further, the urine dipstick is positive for blood, although there are no RBCs in the urine. Myoglobinuria is clinically evident only if urine myoglobin levels exceed 100 mg/dL.

If malignant hyperthermia is suspected alongside rhabdomyolysis, genetic testing for RYR1 mutation or a caffeine contracture test may be performed. Genetic testing is required if an inherited enzyme deficiency is suspected. Lipin-1 (LPIN-1) gene mutations cause recurrent rhabdomyolysis in children. This gene codes for muscle-specific phosphatidic acid phosphatase. The episodes of rhabdomyolysis are precipitated by fever, sepsis or infections, prolonged fasting, or exercise.

Metabolic disturbances such as hyperkalemia, if present, require ECG for further cardiac evaluation. Hypocalcemia may be present at the initial stage, while rebound hypercalcemia is observed during the correction stage.

Other conditions with elevated creatine kinase include myositis, muscular dystrophies, hyperthyroidism, and hypothyroidism. A muscle biopsy may be used to differentiate rhabdomyolysis from myositis.

Other causes of dark-colored urine include porphyria, hemoglobinuria, rifampicin or vitamin B12, and beetroot.

It is important to initiate early treatment in order to prevent further renal damage. There may be substantial hypovolemia due to the accumulation of fluid in the affected muscles; hence, emergency intravenous fluid administration (0.9% NaCl, 1.5 L/hour) is indicated to counter the hypovolemia and prerenal azotemia.

If the patient is taking any drug that could cause rhabdomyolysis, it should be stopped and, if required, appropriate antidotes should be administered. In patients with compartment syndrome, fasciotomy should be considered early to prevent further renal and muscular damage.

Dyselectrolytemias should be corrected. Hyperkalemia is treated with insulin, glucose, and sodium bicarbonate. Hypocalcemia should be treated only if there is associated hyperkalemia. The mainstay of AKI management in this condition is fluids and hydration therapy (aggressive). A urine output of 200 mL/hour should be maintained until the plasma levels of creatine kinase drop below 1000 U/L.

Hemodialysis may be required in 4–8% of patients with rhabdomyolysis. The most common indications for hemodialysis in this condition are severe hyperkalemia and persistent oligo-anuric renal failure. However, continuous venovenous hemofiltration works better than hemodialysis to filter out larger molecules like myoglobin.

In patients with inherited susceptibility for rhabdomyolysis, prevention is the best management modality. A low-fat diet may be helpful. Other dietary measures may be taken, depending on the underlying condition. In patients with malignant hyperthermia, caution should be taken while administering anesthetic agents. Prolonged exercise or fasting should be avoided in patients with glycogen storage disorders and fatty acid oxidation disorders.

The prognosis largely depends on when the management was instituted during the course of the disease. Patients who are treated early in an aggressive manner have a very good prognosis. The prognosis is markedly worse if there is associated AKI. In children, mortality due to rhabdomyolysis ranges from 7–10%; however, almost all children succumb to the underlying etiology of the rhabdomyolysis (trauma, sepsis, burns, or toxicity).