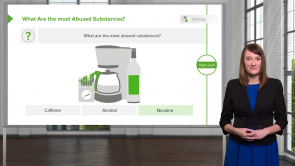 
Study Psychiatry with an Expert!

In this course you will get the high–yield information you need to pass your USMLE exams. Learn about various control disorders and how to assess and treat them properly.

With this course you will learn about the following:

Your tutor for this course is Dr. Helen Farrell, a Harvard faculty member with experience in treating control disorders in various settings. She will explain the concepts in a well structured manner. If you are a medical student or resident, this course is perfect for you.

Your study progress will be supported by download material, lots of graphics and the opportunity to rewind the lectures, to make sure you can learn at your very own pace.

What are you waiting for? Start now!

Receptors and Neurotransmitters of the CNS
In the human brain, information is transmitted in the form of bioelectrical impulses and chemical signaling molecules. These molecules, called neurotransmitters, are protein molecules used by neurons to emit a specific signal. The signals are picked up in the plasma membrane of adjacent neurons by receptors, which are complexes of protein subunits responsible for sensing relevant stimuli and setting in motion the cellular machinery required to produce the desired response.
read more 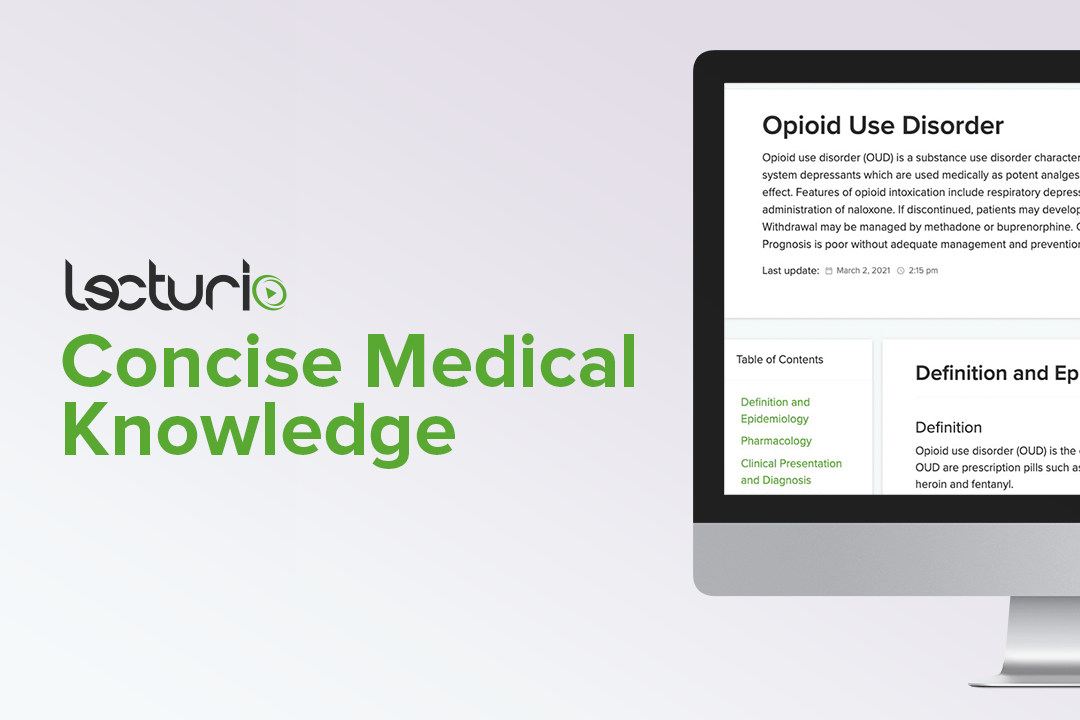 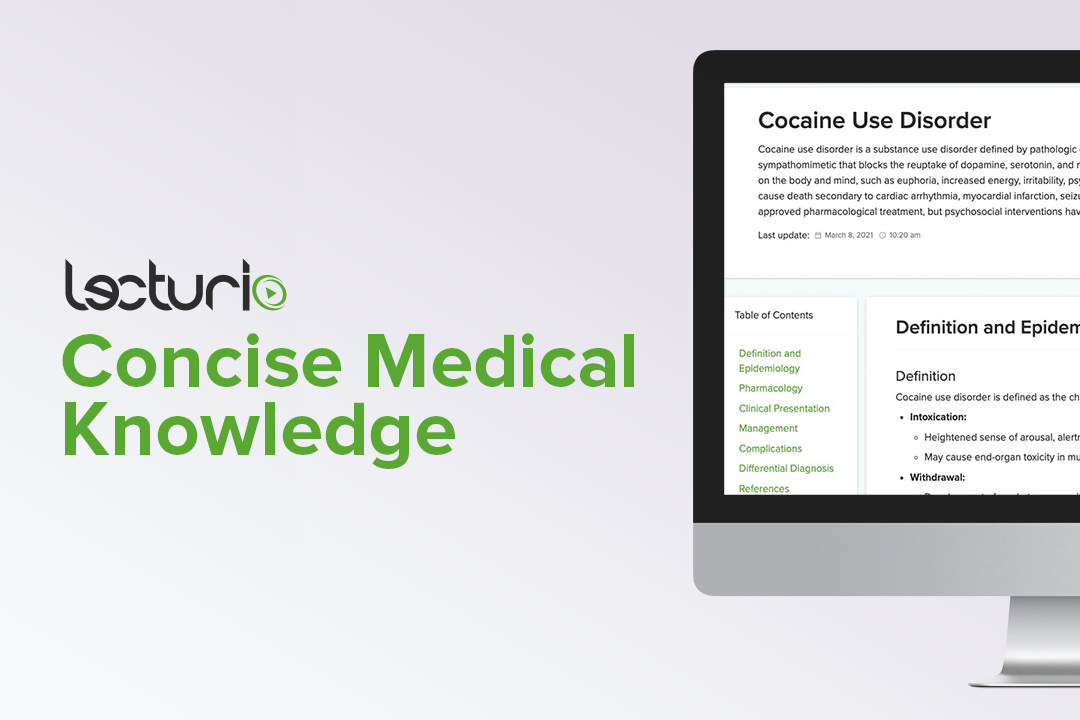 Cocaine Use Disorder
Cocaine use disorder is a substance use disorder defined by pathologic consumption of the recreational drug cocaine. Cocaine is an indirect sympathomimetic that blocks the reuptake of dopamine, serotonin, and norepinephrine from the synaptic cleft. This process causes stimulant effects on the body and mind such as euphoria, increased energy, irritability, psychosis, decreased appetite, and weight loss. Cocaine overdose can cause death secondary to cardiac arrhythmia, myocardial infarction, seizure, or respiratory depression. Prognosis is poor as there is no approved pharmacological treatment, but psychosocial interventions have been associated with improved outcome.
read more 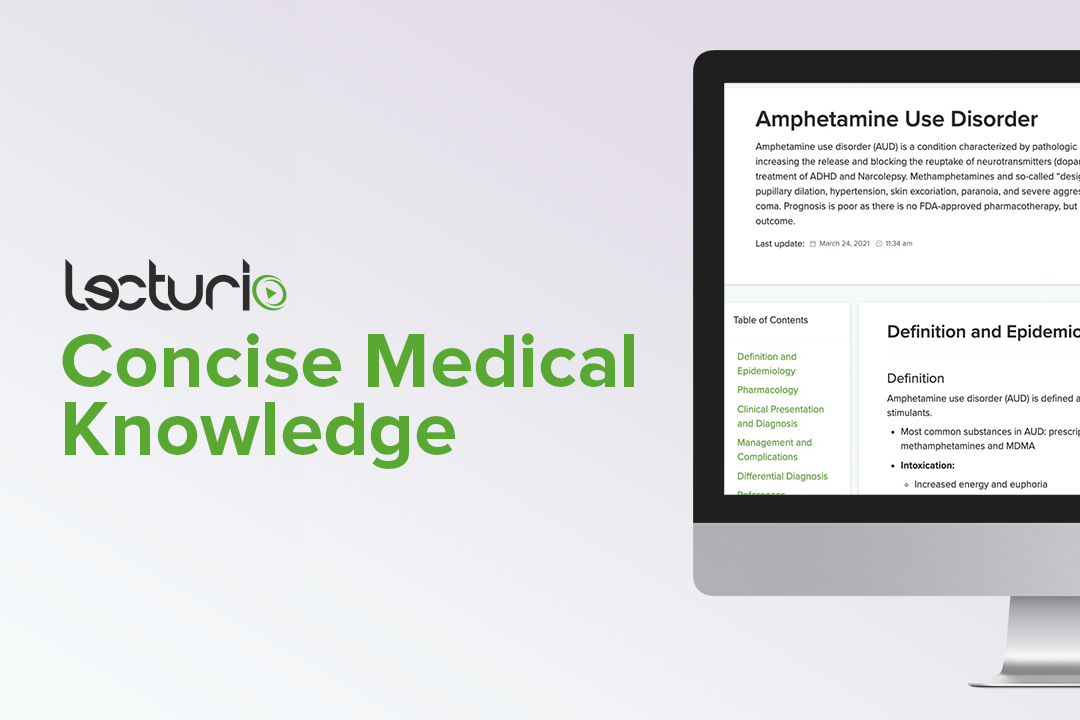 Amphetamine Use Disorder
Amphetamine use disorder (AUD) is a condition characterized by pathologic use of psychostimulants. Amphetamines produce their effect by increasing the release and blocking the reuptake of neurotransmitters (dopamine, norepinephrine, serotonin). Medically, they are used for the treatment of ADHD and narcolepsy. Methamphetamines and so-called designer drugs have no clinical use. Intoxication results in euphoria, pupillary dilation, hypertension, skin excoriation, paranoia, and severe aggression. Fatal complications can arise from myocardial infarction and coma. The prognosis for AUD is poor, as there is no FDA-approved pharmacotherapy, but psychosocial interventions have been associated with improved outcomes.
read more 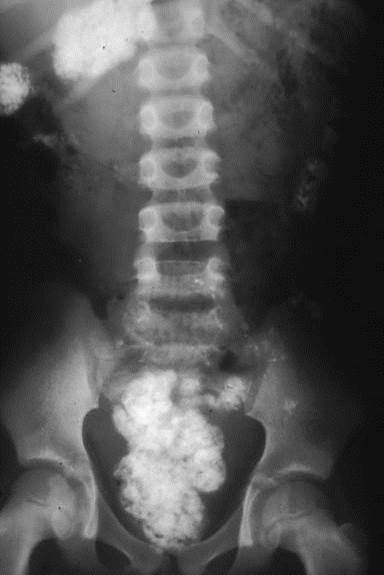 Pica
Pica is an eating disorder characterized by a desire or recurrent compulsion to eat substances that are nonnutritive and not food. These compulsions and ingested substances are inappropriate for age or culture. Pica manifests most commonly during childhood and pregnancy and, therefore, carry a high risk for malnutrition and anemia. Patients usually present with nutritional deficiencies or complications from ingesting nonfood substances. Management aims are to stabilize patients medically and then provide appropriate behavioral therapy as a 1st-line option.
read more 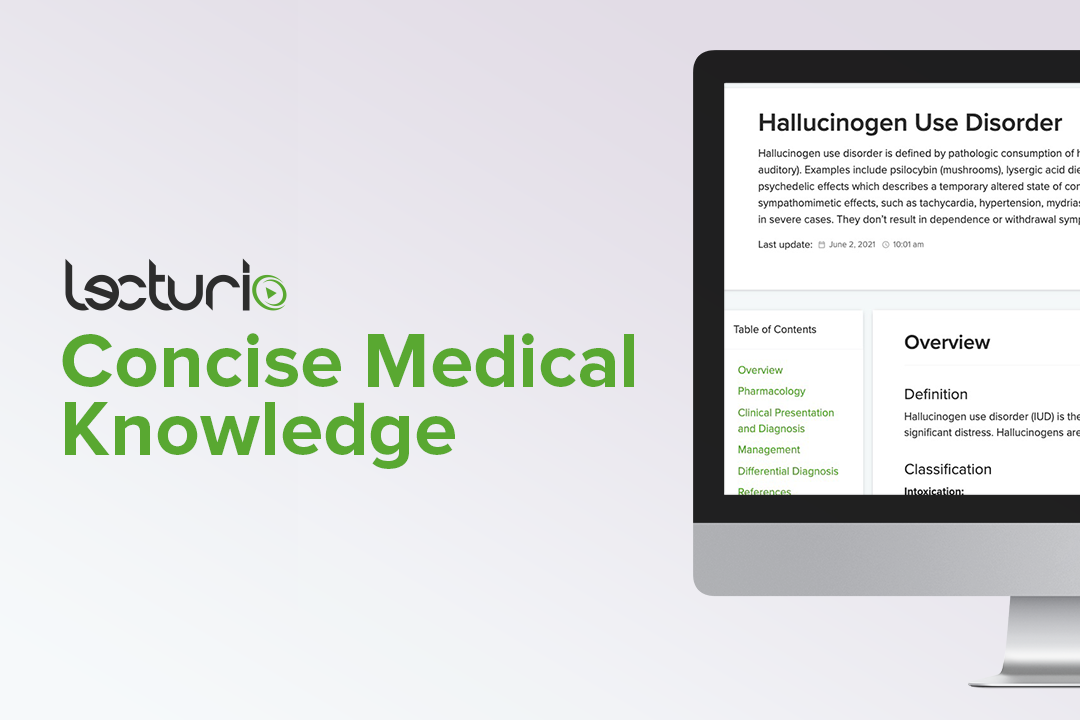 Hallucinogen Use Disorder
Hallucinogen use disorder is defined by the pathologic consumption of hallucinogenic substances that cause perceptual distortions (visual or auditory). Examples include psilocybin (mushrooms), lysergic acid diethylamide (LSD), and phencyclidine (PCP). These drugs are used for their psychedelic effects, i.e., a temporarily altered state of consciousness. Most hallucinogens produce nausea, vomiting, and mild sympathomimetic effects such as tachycardia, hypertension, mydriasis, hyperthermia, and diaphoresis. Although hallucinogens may cause hyperthermia in severe cases, they don’t result in dependence or withdrawal symptoms.
read more 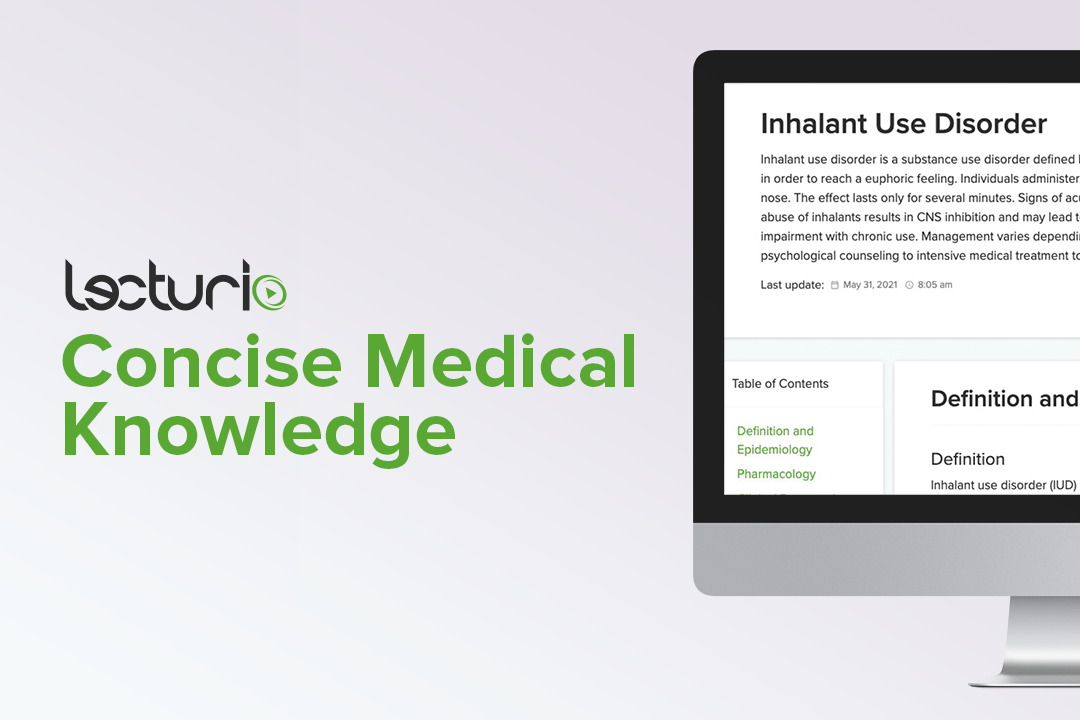 Inhalant Use Disorder
Inhalant use disorder is a substance use disorder defined by pathologic consumption of inhalant substances—such as glue, paint, or lighter fluid—in order to reach a euphoric feeling. Individuals administer inhalers through the mouth (commonly known as huffing) or sniff them through the nose. The effect lasts for only several minutes. Signs of acute intoxication range from intense transient euphoria up to loss of consciousness. The abuse of inhalants results in CNS inhibition and may lead to coma and even death during acute intoxication and long-term cognitive impairment with chronic use. Management varies depending on the type of inhalant and ranges from supportive measures, including psychologic counseling, to intensive medical treatment to address and prevent further organ damage.
read more 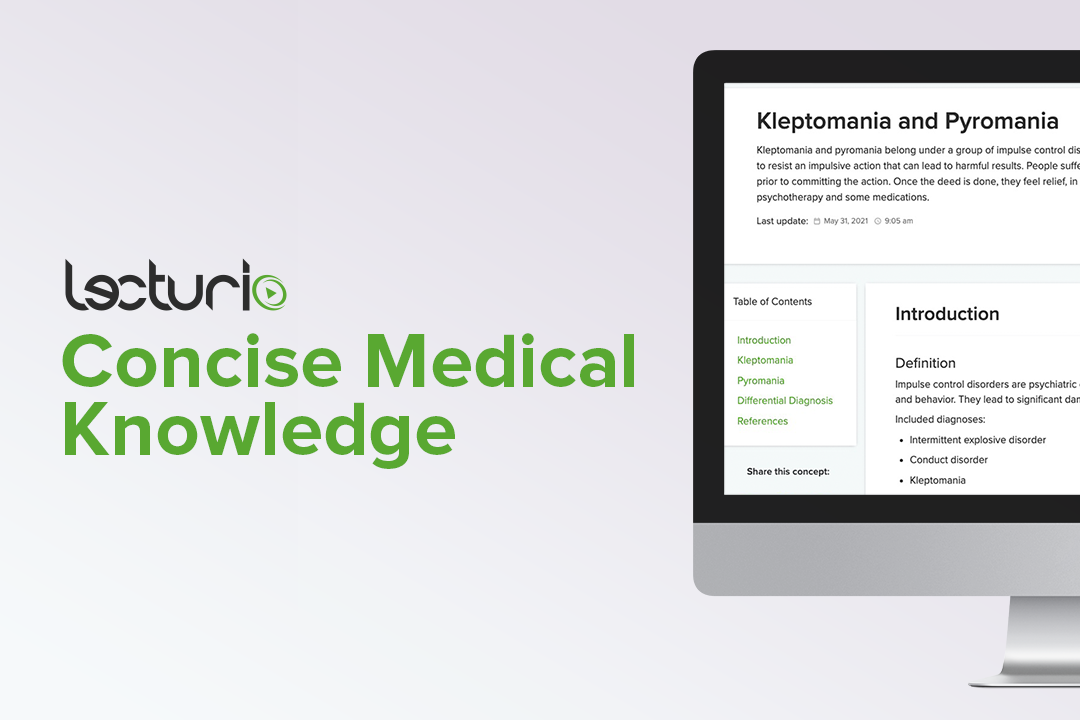 Kleptomania and Pyromania
Kleptomania and pyromania are impulse control disorders, which are psychiatric conditions characterized by the inability to resist an impulsive action that can lead to harmful results. People suffering from these disorders experience a feeling of increased anxiety prior to committing the action. Once the action is completed, patients feel relief in spite of the potentially dangerous consequences. Treatment includes psychotherapy and some medications.
read more 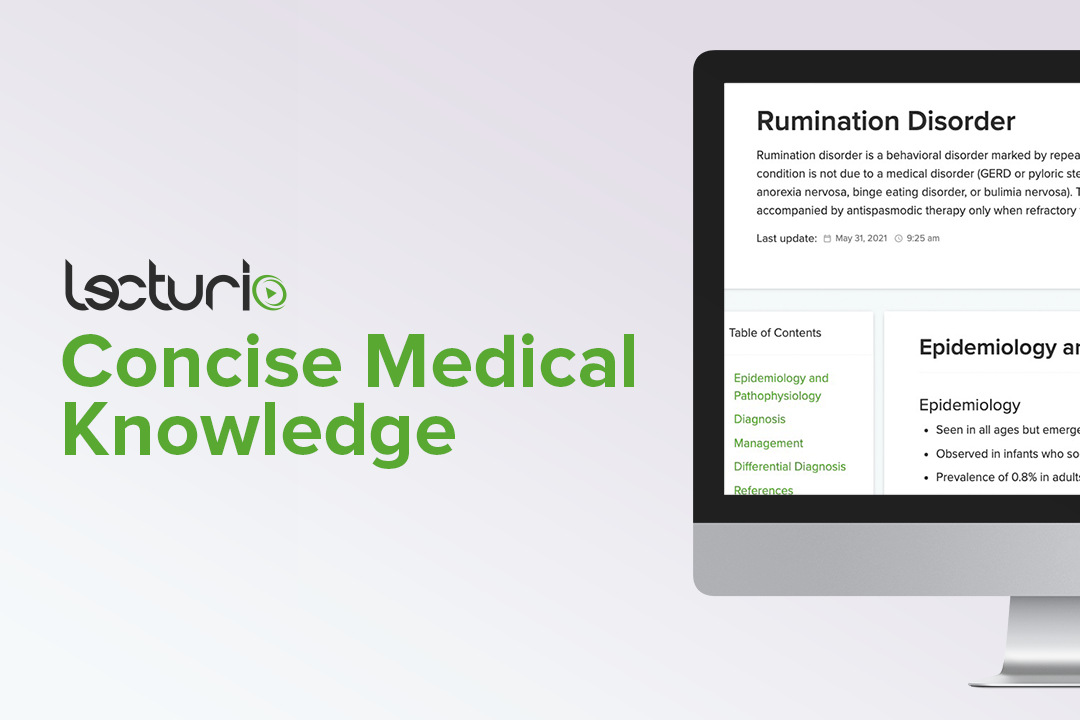 Rumination Disorder
Rumination disorder is a behavioral disorder marked by repeated regurgitation of food, which may be re-chewed, re-swallowed, or spit out. This condition is not due to a medical disorder (GERD or pyloric stenosis) or other eating disorders (avoidant/restrictive food intake disorder, anorexia nervosa, binge eating disorder, or bulimia nervosa). Treatment is multifactorial, focused on treating underlying mood disorders and accompanied by antispasmodic therapy only when refractory to behavioral modification.
read more 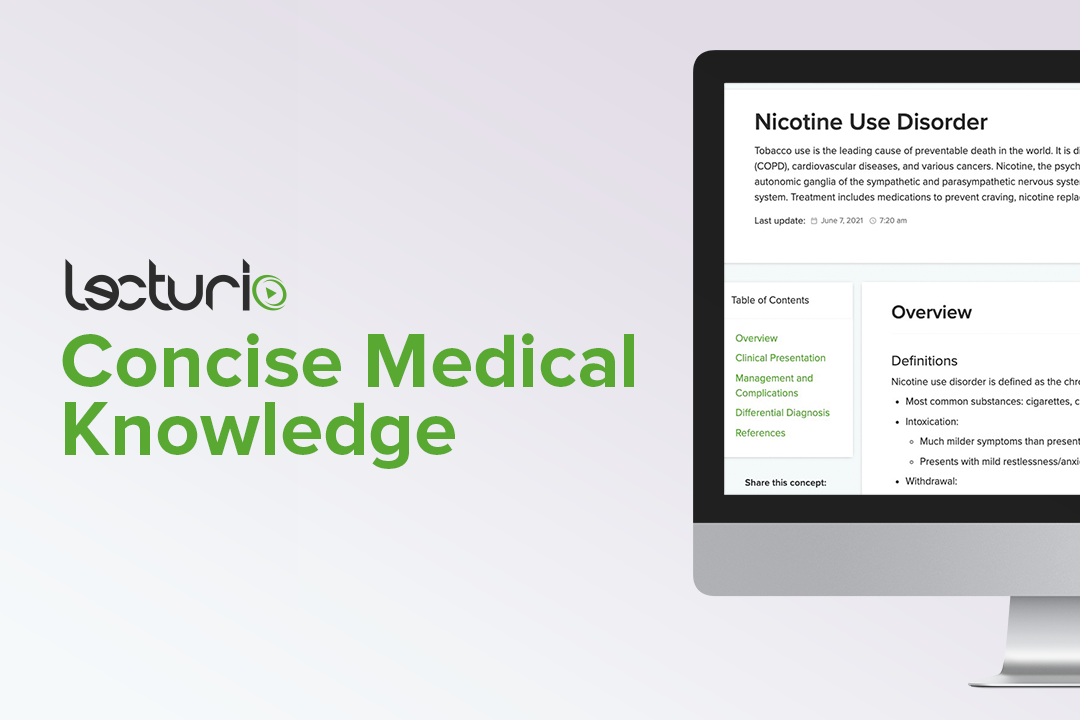 Nicotine Use Disorder
Tobacco use is the leading cause of preventable death in the world. Tobacco use is directly related to a higher risk of chronic obstructive pulmonary disease (COPD), cardiovascular diseases, and various cancers. Nicotine, the psychoactive component of tobacco, stimulates nicotinic receptors in the autonomic ganglia of the sympathetic and parasympathetic nervous systems. Nicotine is highly addictive through its effects on the dopaminergic system. Treatment includes medications to prevent cravings, nicotine-replacement therapy, and psychotherapy.
read more 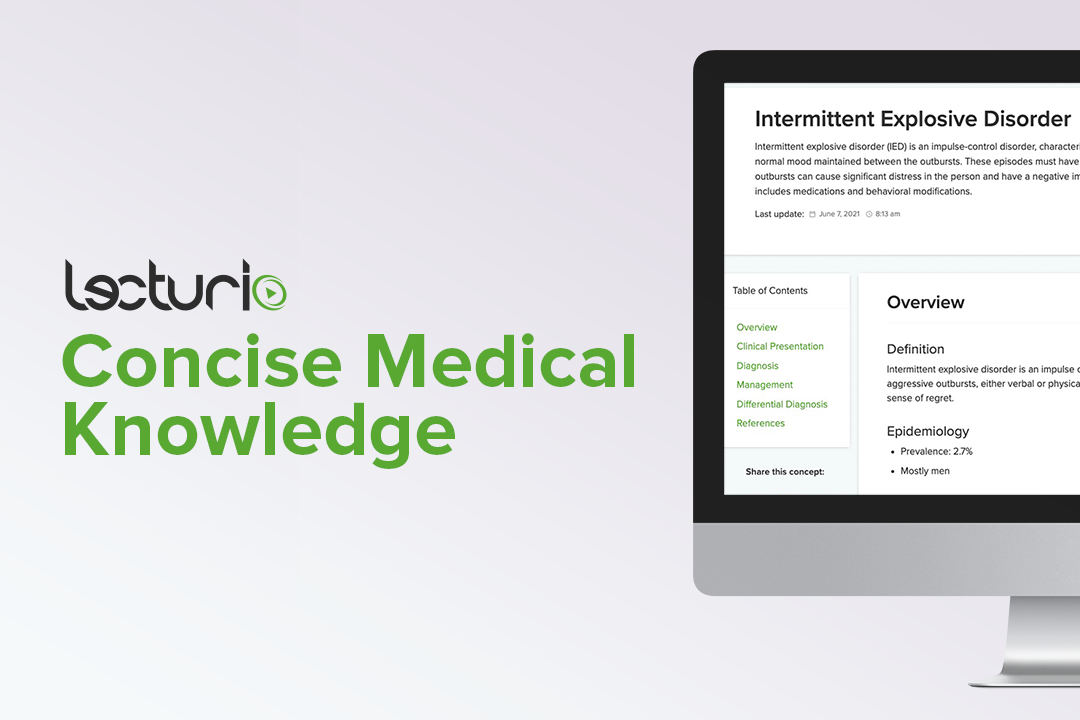 Intermittent Explosive Disorder
Intermittent explosive disorder (IED) is an impulse-control disorder characterized by abrupt episodes of recurrent, severe, angry outbursts with normal mood maintained between the outbursts. The episodes must have been present for at least 3 months. These erratic and explosive outbursts can cause significant distress in the person and have a negative impact on their life. The disorder is usually diagnosed in young men. Treatment includes medications and behavioral modifications.
read more 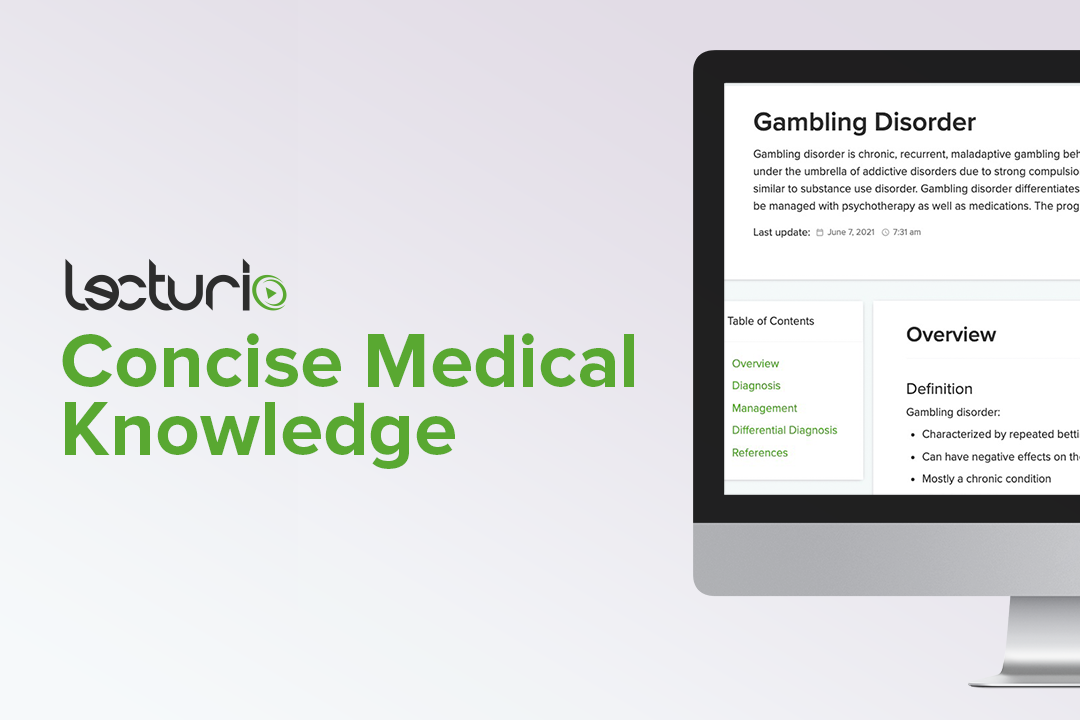 Gambling Disorder
Gambling disorder is chronic, recurrent, maladaptive gambling behavior that results in impairment in social or personal life. The disorder fits under the umbrella of addictive disorders due to a strong compulsion to gamble as well as tolerance and withdrawal effects that are similar to substance use disorder. Gambling disorder differentiates itself from nonpathologic gambling by the level of tolerable risks. The disorder can be managed with psychotherapy and medications. The prognosis is usually poor, with high rates of relapse and complications.
read more 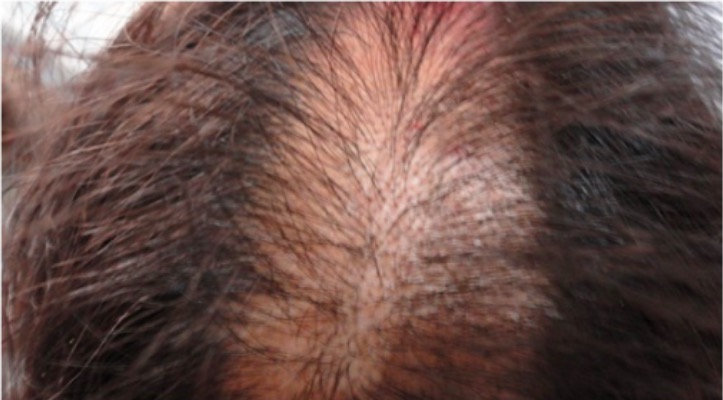 Trichotillomania
Trichotillomania (hair-pulling disorder (HPD)) is defined as repetitive pulling of one’s hair resulting in hair loss that may be visible to others. This disorder is classified under obsessive-compulsive and related disorders, as there is tension prior to the act that is relieved after the hair-pulling. Diagnosis is made clinically through history taking and physical exam. Treatment is multimodal, using behavioral interventions to recognize and properly respond to the tension and pharmacotherapy, which is beneficial in some cases.
read more 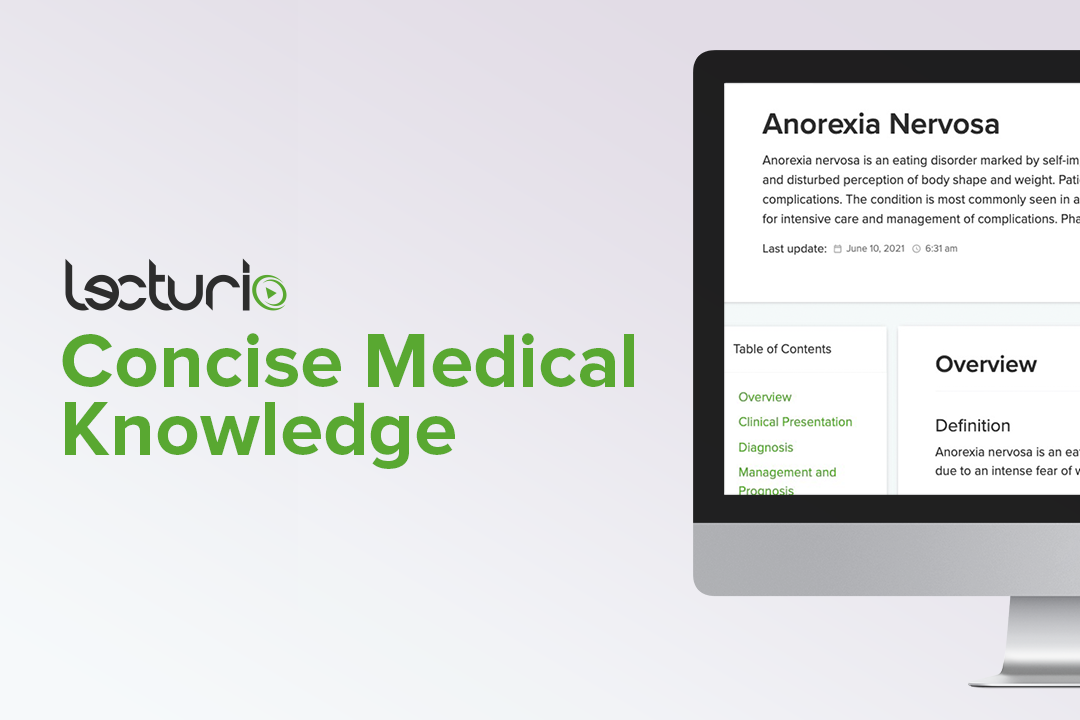 Anorexia Nervosa
Anorexia nervosa is an eating disorder marked by self-imposed starvation and inappropriate dietary habits due to a morbid fear of weight gain and disturbed perception of body shape and weight. Patients have strikingly low BMI and diverse physiological and psychological complications. The condition is most commonly seen in adolescent girls. Treatment consists of psychotherapy (CBT) and patient hospitalization for intensive care and management of complications. Pharmacotherapy has a limited role.
read more 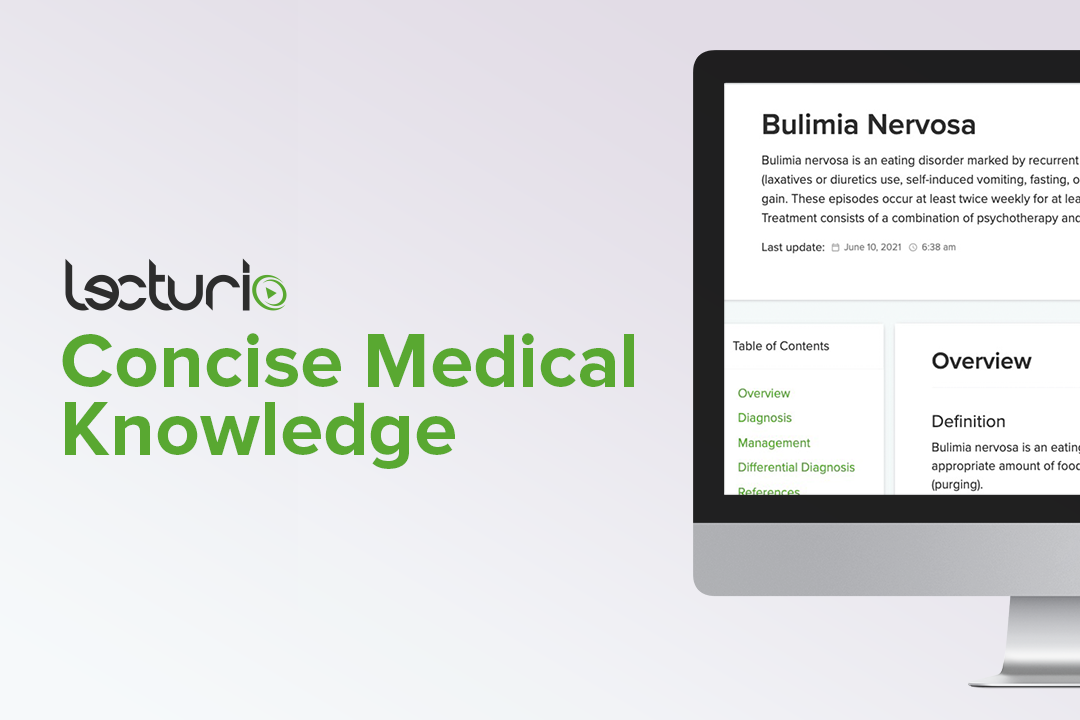 Bulimia Nervosa
Bulimia nervosa is an eating disorder marked by recurrent episodes of binge eating accompanied by inappropriate compensatory behaviors (laxatives or diuretics use, self-induced vomiting, fasting, or excessive exercise) to counteract the effects of binge eating and prevent weight gain. These episodes occur at least twice weekly for at least 3 months. Patients have normal body weight (or are slightly overweight). Treatment consists of a combination of psychotherapy and pharmacotherapy.
read more 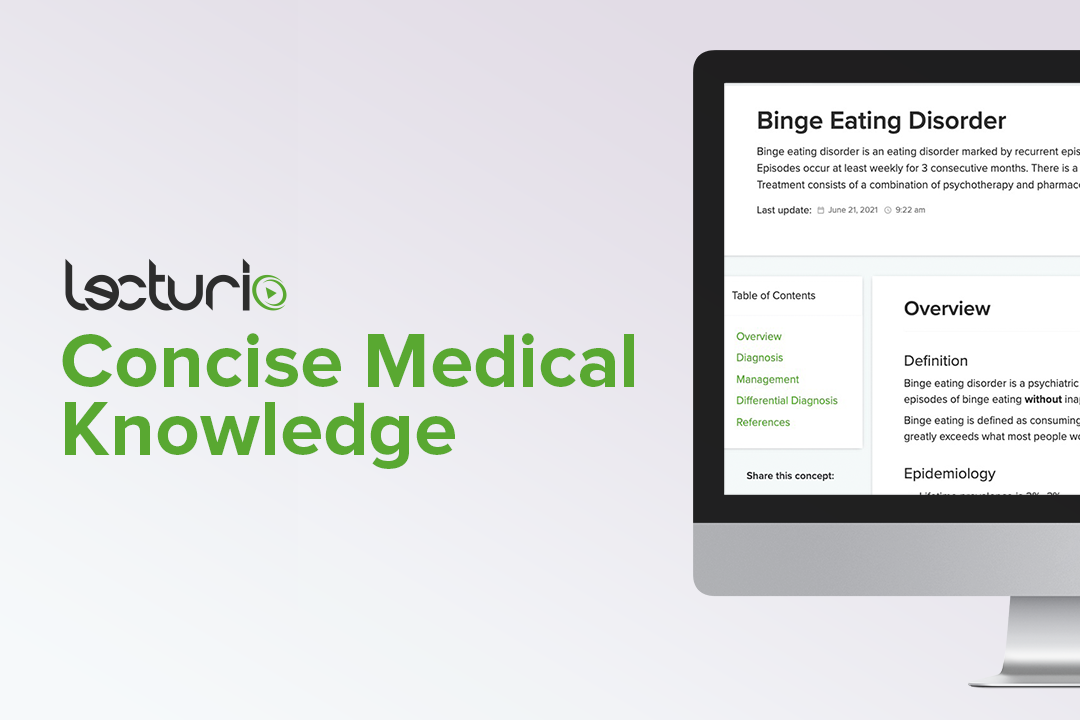 Binge Eating Disorder
Binge eating disorder is an eating disorder marked by recurrent episodes of binge eating without inappropriate compensatory behavior. Episodes occur at least weekly for 3 consecutive months. There is a loss of control during the episodes of binging as well as distress after. Treatment consists of a combination of psychotherapy and pharmacotherapy.
read more 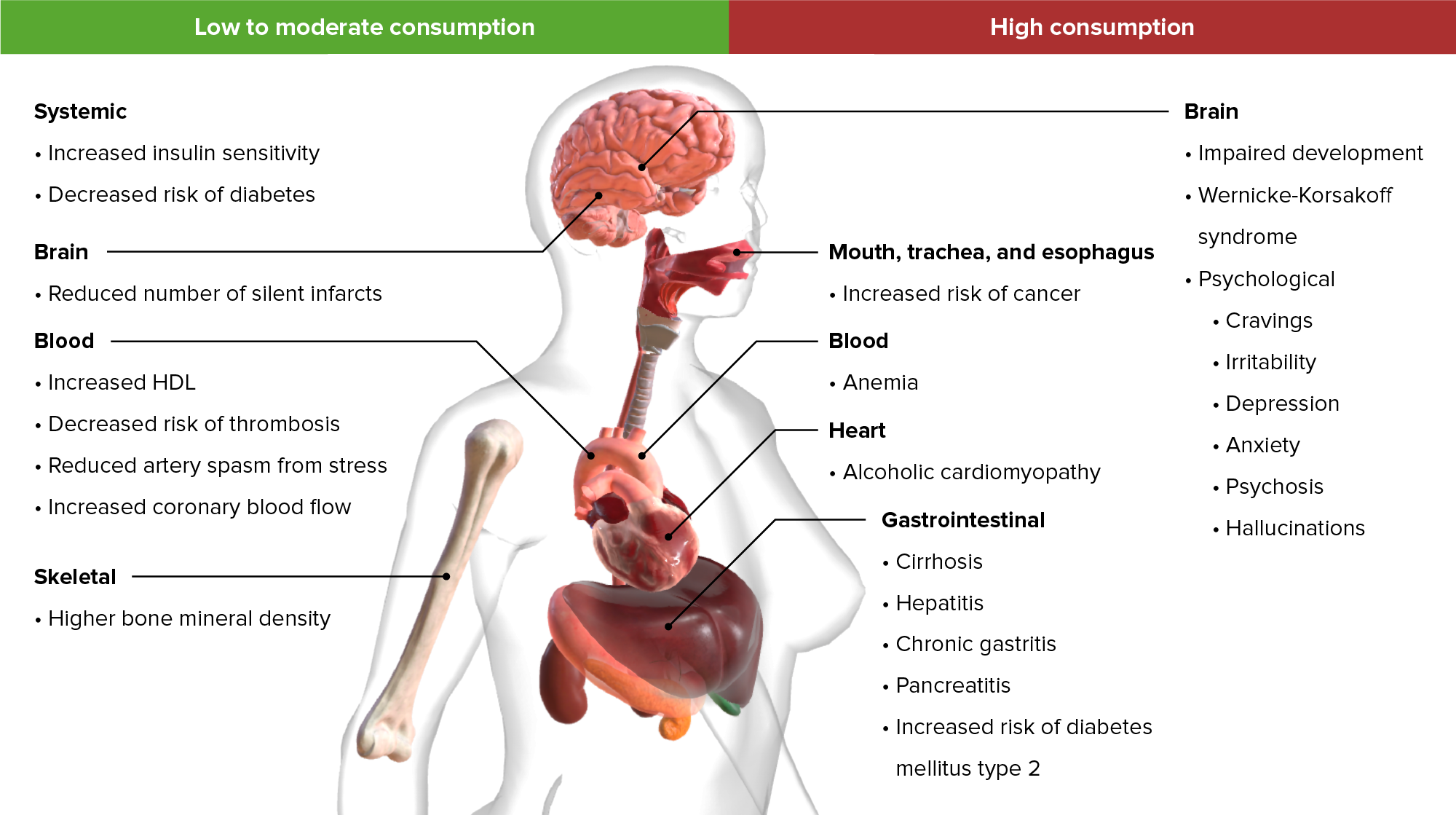 Alcohol Use Disorder
Alcohol is one of the most commonly used addictive substances in the world. Alcohol use disorder (AUD) is defined as pathologic consumption of alcohol leading to impaired daily functioning. Acute alcohol intoxication presents with impairment in speech and motor functions and can be managed in most cases with supportive care. Withdrawal from chronic alcohol use can have fatal consequences, including delirium and seizures, and is managed with benzodiazepines. Chronic AUD affects almost every part of the human body and has serious impacts on a person’s mental and physical health. Alcohol user disorder can be managed with psychotherapy as well as medications; however, the prognosis is usually poor, with high rates of relapse and complications.
read more 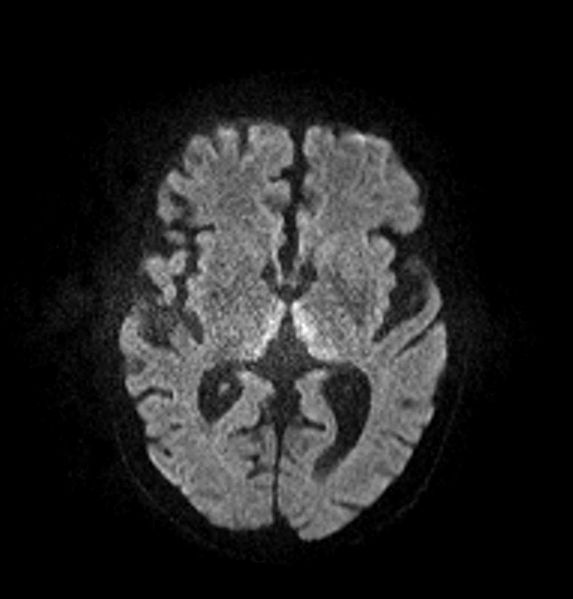 Your Educators of course Control Disorders

Dr. Helen M. Farrell is an Instructor in Psychiatry at Harvard Medical School in Massachusetts, USA.
She obtained her MD from Trinity College Dublin, Ireland in 2006. Currently, she is a Harvard Medical School faculty member, and board certified Psychiatrist and Forensic Psychiatrist.
Due to her achievements, she is well published in the field of forensic psychology, and has appeared as an expert witness in court. She also delivered the TEDx Talk, “Creating Hope for Mental Health” in 2015.
Within Lecturio, Dr. Farrell teaches courses on Psychiatry.

Great Content
By Raju M. on 06. May 2019 for Wernicke Encephalopathy and Korsakoff's Syndrome

Short and concise lecture. It helped to review the topics.

Great Content
By Raju M. on 06. May 2019 for Wernicke Encephalopathy and Korsakoff's Syndrome

Short and concise lecture. It helped to review the topics.