Lecturio Medical Student Blog
Residency & Beyond
Specialty Spotlight: The Life of a Pediatrician

Specialty Spotlight: The Life of a Pediatrician

So you’re thinking about becoming a pediatrician? We sat down with Emanuele M., MD to talk about what it’s like to work in this specialty. Learn about his experience and gain general insights on working in pediatrics. 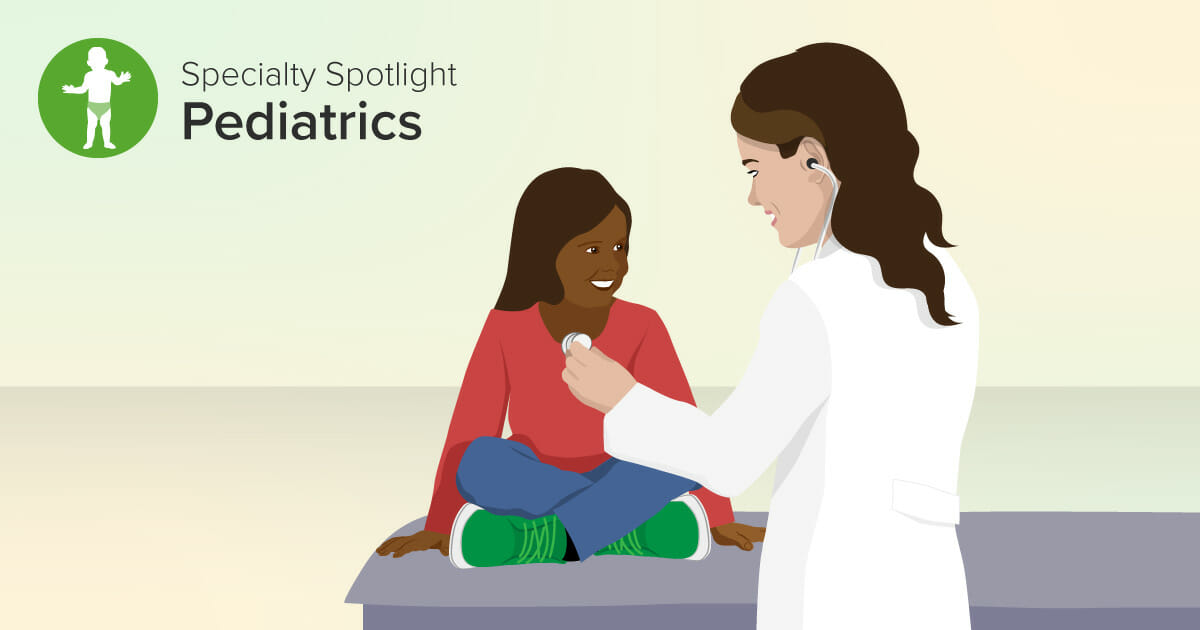 Interview: What Are the Steps to Becoming a Pediatrician, and What is it Like?

Q: Hi Emanuele! Which medical school did you attend, where did you do residency, and what was that like?

A: Albany Medical College, in upstate New York, is in the heart of a historic city, but very close to nature, and very cold in the winter – to the point at which your hair freezes. It is a medium-sized school, about 150 students per class, and it’s one of the oldest medical schools in the nation (founded in 1839).

They say med school is like learning to drink from a fire hose: lots of information and work, but if you have the tools and support, it is very manageable! I liked my medical school. There was a lot of investment in technology. We already had live streams of all lectures before Zoom was even invented, which were also interactive so you could ask questions. The school organized for students to attend conferences and they wanted us to go to clinics even in first and second year. Overall, the school was very focused on making us successful as medical students.

For residency, I went to the University of California, Davis, where my now-wife lived at the time. The pediatrics program there really was a perfect fit for me. Pediatric residencies aren’t all the same. Mine was a medium-sized program (12 residents per year), which was big enough to have all the resources we needed but small enough so that everyone still knows each other. The hospital was a pediatric hospital, so everyone was specifically trained for this. Due to the radius from which patients came in and because we were a Level 1 trauma center, I got to see a wide variety of patients there. My office was dedicated to underserved, low-income patients, who often didn’t have health insurance, which also made the work very meaningful to me.

Q: Why did you decide to become a pediatrician?

A: I always liked kids. I was a daycare volunteer, a camp counselor, etc. But through medical school, maybe even because of it, I thought pediatrics was not for me. I was worried about what seeing sick and dying kids would do to me emotionally, and if it would keep me from being an effective doctor.

Then in my third-year peds rotation, I spent three or four weeks in a pediatric intensive care unit, where we had a patient with a severe infection. She had ARDS, was unconscious on a ventilator, and there was a general sense that she probably wouldn’t make it. I was anxious about that, but then there was a situation in which it was time to wash her, and the mom was there. And when she started washing her daughter, it seemed to help her. It gave her purpose. I realized then that being able to help was much more important to me than being afraid. This event pushed me in the right direction to overcome the fear of not being able to take care of them.

Kids are much more resilient than adults. Adults might not come out of the ICU, but with kids you can make such a huge impact. They might walk out of there just fine, with their whole lives in front of them.

They’re also kind of blameless – lots of adults don’t take care of themselves. Of course, such adults are still deserving of care, but it’s different with kids who are totally without fault. Pediatrics also gives you a wide variety of things you can do. As a surgeon, you’re in the operating room, but as a pediatrician, you can work in the ICU, in emergency, or anywhere else. There is a broad spectrum of things you can do if you choose this path.

Q: What does a typical day as a pediatrician look like?

A: It really depends. Pediatrics leaves you open for a lot of things: You can choose two or three career paths without any extra training. You may be an office/ambulatory pediatrician, which would probably be more of a typical 9–5 job. You may be on call for clinics for some nights or weekends, or just have a day for urgent care with no planned appointments. You might be part of an inpatient/outpatient practice, or a smaller one that only does ambulatory. Or you could have a hybrid position with a few days in a hospital, and a few days in an office. The office position is overall more structured.

A hospitalist career comes with a completely different schedule. You’d likely have a set number of working days per month, which are definitely an intense time. These days might include checking on new admissions, doing pre-rounds, work rounds with the team, admitting from emergency or clinics, and of course being on-call and dealing with overnight admissions.

The rounds are always a stressful time for med students and residents, who might get tested in this situation. Because of that, sometimes the humanity gets sucked out a bit in that situation and it also becomes stressful for patients. To improve this experience for patients, UC Davis shifted to something called “patient-centered rounds,” in which you’re only talking to the patient, rather than over them while doing rounds. On the other hand, of course, this is more time-consuming.

A: The best part:

Kids don’t vote, they have no lobby, they don’t get to pick what they have for dinner – they have no say. And sometimes the people responsible for them don’t make the best choices for them. But as a pediatrician, you have the opportunity to advocate for them!

If you can do that, because they’re so little, you can have such a huge impact on their lives. A small example for this could be portion sizes: If you can show parents how to properly portion their kids’ food instead of giving them portions that are too big, and if they follow it, that can prevent obesity later in life and all the diseases and consequences that come with it.

Biggest challenge: It’s often assumed that kids are just “half adults.” Just because a kid is half the size of an adult doesn’t mean that attention to detail, funding, and research can just be half. Kids often need more attention and time. If an IV is put in a child and s/he screams, how am I listening to their lungs at the same time? Also, kids don’t talk (as much), so you need to be more of a detective. There is definitely more guesswork, and you need to be more careful when doing examinations.

Q: Tell me something unique about your field – any crazy stories?

A: I once pulled a cockroach out of a girl’s ear. Another kid shot his finger off with his dad’s gun, and they found it in the ceiling.

One of my favorite moments in the ICU was when a 4-month-old came in, super white, very anemic, low white blood cell count – we thought he had leukemia. We did a lot of tests, but in the end it turned out he was being given only goat’s milk! The parents were concerned about baby formula, so did not want to give him that. But goat’s milk is very deficient in folate and vitamin B12, which made him anemic. So all the doctors thought he had a huge problem, but what we should have done was take a really careful history – we would have learned much sooner what the problem was. Within a week of having proper nutrition, he was fine!

This is challenging with pediatrics: Lots of people see things differently. Anti-vaxxers are just one more example. It’s really easy for us pediatricians to condemn those people, but often they are convinced they’re doing the best thing for their child. You won’t actually achieve anything with antagonizing patients or parents, even if you disagree. We really should try to work together; in the end, we want the same things.

Q: What advice do you have for students deciding on their specialties?

A: What you need to try and think about is whether you’ll be happy and whether you’ll be able to do this job in the hardest of situations. It sounds great to be able to help kids, but you have to get up really early, have crazy hours, your patients or their parents may get upset at you, it’s easy to burn out… Is this job still going to bring you satisfaction in these situations? This is something that everyone in medicine should think about.

The other thing is: You can always change your choice! Everyone in med school thinks you need to be so specific and choose really early on to gather all this experience. Sure, that is great to do, but you can allow yourself to doubt and try other things. Personally, I was convinced I would do several different specialties before I found pediatrics was really the right fit. You can absolutely change and still be successful if you’ve experienced a lot of different things.

At a Glance: How to Become a Pediatrician

What to major in to become a pediatrician

In general, to get into medical school, no specific major is required (St. George’s University). Just focus on getting good grades in physics, biology, and chemistry.

After graduating, you complete a residency in pediatrics, which will take about three years. If there is an area of pediatrics you’re interested in specializing in, that fellowship in that specialization will add time onto completing your education.

After completing your residency, you’ll be eligible to receive board certification to become a pediatrician.

How long does it take to become a pediatrician?

What do pediatricians do?

A pediatrician treats and addresses the mental, physical, and social health of children until they are adolescents (St. George’s University).
Pediatricians’ patients most often visit them for a physical examination, with newborns, one-year-olds, or two-year-olds making more frequent visits than a toddler (3 years old or older). (American University of the Caribbean School of Medicine)

There are many types of pediatricians, to name just a few (Medical News Today):

What is the lifestyle and work environment of pediatricians?

How much money does a pediatrician make?

The Essentials of Medical Residency

Medical residency will be a challenging and rewarding moment in your career. Get to know the different types of residents, how to prepare your residency application, and what you’ll be doing once you are a resident.

The impact of COVID-19 on medical education cannot be understated. Learn how Paulina, a Polish medical school graduate, navigated her final year of medical school being disrupted by the pandemic.