Learn How to “Make It Stick” with Renowned Author Peter C. Brown (Part 1)

Peter Horneffer: I’m very pleased to talk to Peter Brown, who is the lead author of the bestselling book “Make It Stick. The Science of Successful Learning”. His co-authors are the preeminent cognitive scientists Henry Roediger and Mark McDaniel from the Washington University in St. Louis, Missouri. Peter is a management consultant and writer. The result of their collaboration is a highly engaging and readable book based on cognitive science. It describes how to build a durable learning using strategies that are very effective but not often intuitive. We are honored to have Peter join us today to provide some insights into how the book came to be written and what he sees as its most important points.

I’d like to start out by asking: What led you to write the book? 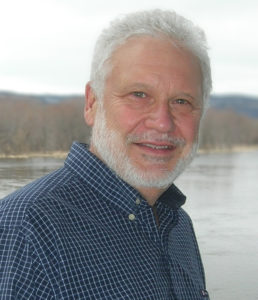 Peter C. Brown is a best-selling writer and novelist living in St. Paul, Minnesota. Image taken from https://makeitstick.net/ with permission.

Peter Brown: I was intrigued by some work that was being done by my brother-in-law Henry Roediger. We were at a family meeting and I was between writing projects and he was describing an effort that he’d been involved in leading for a decade with eleven of his colleagues at different universities around the US into the question of what teaching and learning strategies lead to better retention of the new material. And he said what we’re finding is quite counterintuitive. We’re looking for a way to get it out to a general audience.

So we decided to collaborate and produce a book that was firmly rooted in the science but was written in an anecdotal way, with stories from life, from people, who have been able to at the last minute demonstrate a mastery of something and how they learned it and how that learning process reflects what the science tells us is effective. So that’s how I got involved in the project. I’m not a scientist so I had to learn the science well enough to write about it, explain it, and illustrate it through these stories. So it was a big—but very rewarding—challenge and in a way you could say writing the book is an example of learning. When you read something you ask yourself: What were the big ideas here? How would I describe them in my own words? And this is what it turns out: We learn from the sciences in a highly effective way.

Peter Horneffer: The book opens with the statement that people are generally going about learning in the wrong ways. So, as you mentioned, you had to learn a lot of science from your co-authors to write this book. Do you have any advice that would help our users organize the takeaways from our conversation?

Peter Brown: There’s probably half a dozen or more strategies. But I organize them around three big ideas.

First idea is that we think learning is about trying to push it into the brain, outlining, highlighting, rereading, reviewing, practicing over and over and over again to drive it in. And people spent a lot of effort at that but it turns out that what makes learning stick isn’t trying to drive it in. It’s trying to pull it out. It’s trying to recall it, trying to practice it and letting it alone for a while and coming back to it again later and then trying again to recall it. And this notion of learning sticks when you work at getting it out is an overarching idea. First big idea:

“Get it out to get it in and make it stick.”

Second big idea: There are some kinds of difficulties that make learning stronger and stick better. When learning is easy, it doesn’t stick. Spacing out your practice at retrieving knowledge, chasing out your practice of applying it, elaborating on something you know by pausing, putting the chapter aside and asking yourself: What did I just read? How would I describe this in my own words? How can I relate to what I already know? It slows down learning but it builds the connections and makes it stick.

The third big idea for me is that we’re intuitively drawn to strategies that aren’t very productive. The notion of cramming, rereading, reviewing, underlining, highlighting are the things that most students do—in surveys, 87 percent, that’s their kind of go-to-thing that does not engage the mind in the material in ways that build the connections and the cues for retrieving it again later. So I’ll get it out in order to make it stick. Engage in certain kinds of difficulties that the science shows are highly effective in building the connections and the cues to get it again later and don’t trust your intuition about whether you’ve really learned it. 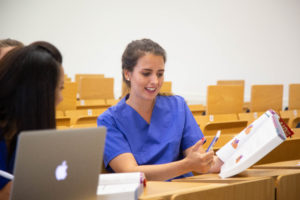 “I did remember. I did learn it. I can explain it.” Quizzing, self-quizzing, quizzing in courses and so forth is a very powerful way to recalibrate your judgment of what you know and where you need to spend more time.

You need to test yourself. You need to try flashcards or explain it to somebody. Do something in which you can actually demonstrate: “Yeah I did remember. I did learn it. I can explain it.” Quizzing, self-quizzing, quizzing in courses and so forth; it’s a very powerful way, not only of securing that knowledge and memory—because it’s a form of retrieval—but of recalibrating your judgment of what you know and where you need to spend more time boning up on knowledge.

So three big ideas for me and under those umbrellas I can fit the body of the book “Make it stick”.

Peter Horneffer: You clearly indicate the importance of this effort for learning and desirable difficulty but one of the challenges is, students often are looking for easy solutions. They want to just have the information jar. It sounds like there really aren’t easy solutions but that it is the effort that makes the concepts stick.

Peter Brown: Exactly! In sports, we have the expression “no pain no gain”. Well, that’s true and semantic learning as well. But just having pain doesn’t necessarily mean gain. You want to have the pain to be constructive pain, you want it to be the constructive kinds of difficulties. 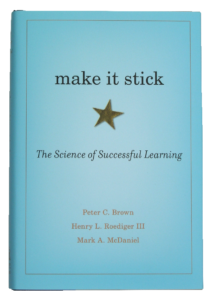 And so, if you take a usually complex field like medical school or law school, it’s going to be difficult in any case. What we’re saying is: Focus on the difficulties that actually deliver the results. This notion of spaced in mixed practice and recalling knowledge and putting it in your own words, and doing this over the course of a semester and reaching back to earlier stuff and recalling it, bring it forward and updating it—that kind of effort will really pay rich dividends in exam time. You won’t have the same kind of anxiety because you will be in the habit of retrieving and describing, or putting down, or applying the skills. In course after course, students are in a situation of frequent low stakes quizzing, they come to the end of their course saying: “I wish I had done all courses. I didn’t have to cram for exams. I was familiar with that process. I knew any of the material and I knew I got caught up at the time.”

So I stopped making it easier. But in some ways, it’s not making it more difficult because it’s getting you where you need to go. On top of the material, instead of having those kinds of huge panics and cramming and all that kind of thing, which really doesn’t work in the long haul.

Watch the first part of the interview

Lecturio is a leading international e-learning platform for medical video education, serving students as well as universities and medical institutions. Founded in Germany’s historic publishing center of Leipzig in 2008, it has advanced to become one of the major players in the e-learning market.

If you have any questions do not hesitate to contact our press team! We will be more than happy to help you quickly! Mail to press@lecturio.com