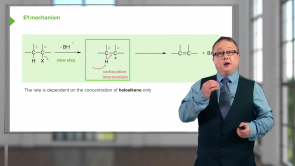 
Start learning in an effective way!

The goal of the lectures is to go beyond memorizing facts. Dr. Le Gresley's high-yield lectures will provide you with a deep understanding of Organic Chemistry.

This course will cover all of the following, essential concepts of Organic Chemistry:

With Lecturio studying has never been so easy. We will support your learning progress with high-yield and high-quality video lectures. You will be provided with downloadable material and quiz questions to track your progress.

Haloalkanes
Organohalides are organic compounds containing one or more halogen substituent. There are about 5,000 organohalides occurring naturally, some of which are produced and are found in algae and various marine organism. Organohalides are a big family of a compound wherein the halogen can be attached to an alkynyl group (C=C-X), a vinylic group (CC-X), a vinylic group (C=C-X), an aromatic ring (Ar-X) or an alkyl group (C-C-X). This article will focus specifically on haloalkanes.
read more

Chemical Compound: Alcohols – General Formula and Functional Group
Alcohols are functional groups that are characterized by one or more –OH groups attached to a carbon of hydrocarbon chain. They are organic derivatives of water where hydrogen ion is replaced by an alkyl group.  They don’t leave their molecular structure by their own. They have high boiling points. They are polar in nature with asymmetrical distribution of charge between oxygen and hydrogen atoms. At room temperature, alcohol are colorless liquids or solids. Ethanol and methanol are common types. They are used in beverages, antifreeze, fuels, and preservatives and for sterilization. Selected reactions of alcohol will also be discussed; namely synthesis of haloalkanes from alcohols, acid-catalyzed dehydration, esterification reactions and redox reactions involving alcohols.
read more

Aromatic Compounds and Electrophilic Aromatic Substitution
Hydrocarbons are compounds that are composed of carbon and hydrogen atoms only. Hydrocarbons can be considered as aliphatic or aromatic. Much focus is given in this article to aromatic compounds. Aromatic compounds, in general, are compounds that exhibit aromaticity, or the property in which a conjugated ring of an unsaturated bond, lone pairs, or empty orbitals exhibit a stabilization stronger than stabilization brought about by ordinary conjugation. In this article, the different properties of an aromatic compound are discussed, as well as their different applications. Focus is also given to benzene, C6H5. Unlike in ordinary alkenes, where addition reaction occurs, reactions of aromatic compounds involve electrophilic aromatic substitution (EAS).
read more

Hydrocarbons: Alkanes and Alkenes
Hydrocarbons are simplest organic compounds derived from fatty acids. They contain bond between carbon and hydrogen in linear, branched or cyclin pattern. Substitution of a functional group at one or more positions in a chemical reaction result in the formation of hydrocarbons. Alkanes are saturated hydrocarbons that share single bond between carbon atoms with formula CnH2n+2.  Alkenes are unsaturated hydrocarbons that share at least one double bond with formula CnH2n. These molecules are found in living organisms both prokaryotes and eukaryotes.
read more

Carboxylic Acids and their Derivatives
Carboxylic acids are a group of compounds containing the functional group –COOH. They represent a large class of organic compounds, with varying applications from numerous natural products to synthetic drugs and hormones. In this article, the carboxylic acid family of compounds will be given focus. Covered in this article is the simple nomenclature and reactivity of these compounds. How the compounds participate in nucleophilic substitution reactions and how the different carboxylic acid derivatives are formed.
read more

Carbonyl Compounds: Nomenclature, Nucleophilic Addition and More
Many of the materials we use in our daily lives contain carbonyl compounds – from pharmaceutical agents to cosmetic products. This article will discuss the carbonyl compounds, focusing on their structures and chemical reactions. Carbohydrates will also be discussed in this article.
read more
Load more

Your Educators of course Organic Chemistry

Dr. Adam Le Gresley is Associate Professor in the department of Pharmacy and Chemistry at Kingston University London.
Le Gresley was awarded his PhD in supramolecular organic chemistry by the University of Surrey in 2004 and carried out his postdoctoral research on photolabile compounds at Drexel College of Medicine in Philadelphia, USA, funded by the NIH.

He was appointed to the Faculty of Science at Kingston University in 2009, where he has been teaching on U/G and P/G courses within chemistry, pharmacy and the biological sciences for the last 6 years. In addition to teaching, Le Gresley maintains a small research group, funded by a number of industrial partners including GlaxoSMithKline with interests in NMR metabolomics, the synthesis of new in vitro diagnostic probes for problem pathogens and novel Rab7 inhibitors for the treatment of diabetes.
He is a regular reviewer for a number of peer-reviewed journals and has contributed to the development of courses across the faculty. Le Gresley was promoted to Senior Lecturer in 2011 and subsequently to Associate Professor in Organic and Medicinal Chemistry in 2013.

There needs to be mechanisms. The lecture, as-is, is entirely superficial.

Did not like the sequence of the power points, too confusing.

GREAT LECTURES! SIMPLE AND TO THE POINT!
By Zara S. on 16. June 2018 for Reaction Parameters – Haloalkanes

The lectures are really good and to the point! I like how they aren't too long (otherwise i wouldn't take anything in after 15mins tbh) They are short and very easy to grasp the concept!

Great Professor!
By Mohammed B. on 02. March 2017 for Organic Chemistry

Great way of showing information , thanks for your amazing efforts.

There needs to be mechanisms. The lecture, as-is, is entirely superficial.

Did not like the sequence of the power points, too confusing.

GREAT LECTURES! SIMPLE AND TO THE POINT!
By Zara S. on 16. June 2018 for Reaction Parameters – Haloalkanes

The lectures are really good and to the point! I like how they aren't too long (otherwise i wouldn't take anything in after 15mins tbh) They are short and very easy to grasp the concept!

Great Professor!
By Mohammed B. on 02. March 2017 for Organic Chemistry

Great way of showing information , thanks for your amazing efforts.