Lecturio Student Blog
Nursing
Abusive Patients and Other Challenges: Tips for Getting through Nursing Clinicals Smoothly

Abusive Patients and Other Challenges: Tips for Getting through Nursing Clinicals Smoothly

Daunting and intense clinicals are unfortunate, but they are also a side of nursing school that can teach you the most because they provide exposure to the uglier sides of the profession, such as abusive patients or workplace bullying. 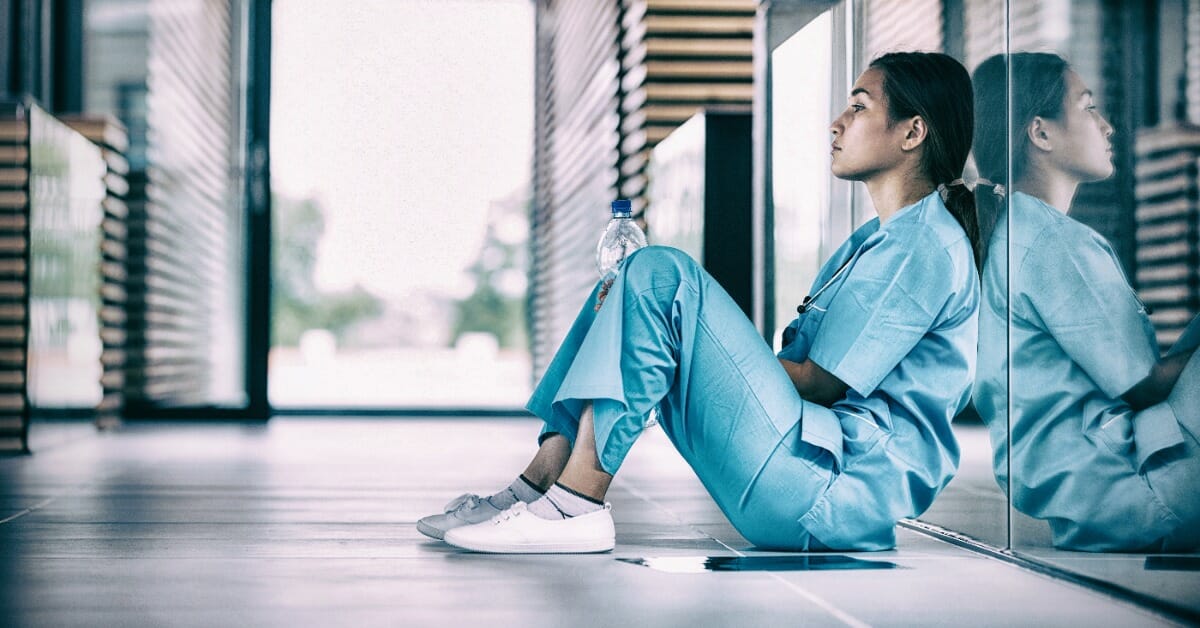 These incidents are always unpleasant, but away from the safety of the classroom, they can quickly become scary. Unfortunately, they are widespread: according to the American Nurses Association, one in four nurses has experienced some form of abuse at the hands of patients. Yet, even with these statistics, many nursing school instructors often gloss over the possibility altogether.

What Could Go Wrong?

Clinics and hospitals are stressful settings for most people. With a few joyful exceptions, most of the patients you encounter are in some degree of pain or discomfort, and their families are often scared or confused.

As a result, tempers tend to run high, which, in many cases, can bring out the worst aspects of their personalities. For many patients, being non-cooperative, rude, or “difficult” provides an outlet to reclaim control when they feel endangered. Overworked or burnt-out colleagues may also be looking for an easy outlet.

As a result, healthcare workers tend to be more exposed to specific incidents that don’t occur as easily in traditional office environments. These are some of the most common:

A verbally abusive patient or relative

When we first think of “verbal abuse,” most of us picture screaming or rants filled with vulgar expletives. While these incidents happen often (especially in Emergency Rooms or when working with people with dementia), they tend to be easier to shake off than many “quieter” incidents.

Whether it is to regain control, exert it, or because some people are mean, you can expect some patients to head for the easiest insult first. If you come into prolonged contact with one of them, they will also learn which buttons to push first.

Nursing students are at an exceptionally high risk of sexual harassment and even occasional groping. Many abusers target nursing students specifically, as they tend to be younger and are perceived as inexperienced or less prone to “making a fuss.”

Sexual harassment from patients can run the gamut from loaded innuendos while giving a patient a bed bath to full-on groping, intimidation, or assault.  Some patients seem to think it’s funny, others are trying to scandalize you, and others are genuine psychopaths – and it is tough to figure out which one is which, as many incidents escalate quickly.

I once had a patient unzip his pants, pull out his genitals, and start flapping them around as I changed a dressing on his diabetic foot ulcer. I still don’t know how it happened; one second, the nurse I was shadowing was stepping out to answer a phone call, and I was left cleaning the wound. The next, I am looking up to find it all in my face.

I managed to scream at him and tell him to “put it away.” I was never in any real danger, as the patient was frail, and I was next to the door. But I would be lying if I said I didn’t want to cry as soon as I was by myself again.

Every once in a while, offensive verbal tirades or sexual innuendo are taken a step further. Many nurses, doctors, and technicians have ended up with a black eye, or have been tackled or scratched by a patient. Most of the time, these incidents involve agitated or disoriented patients. Unfortunately, many times it happens simply because they are confident you won’t hit back.

Here’s YouTuber and Lecturio Nursing Consultant Nurse Liz’s perspective on the topic of violence against nurses:

The cliché that “nurses eat their young” has been in existence for nearly 40 years, which is four decades too many. Approximately 30% of nurses report experiencing or witnessing bullying in the workplace.

In many cases, this takes the form of older, more experienced nurses intimidating students or new graduates. Some nurses believe that they should be extra harsh with students to better prepare them for “what’s out there.” In other cases, they are just taking out their frustrations on others with less seniority.

Either way, bullying among nurses is now listed as one of the top contributing factors to burnout.

All positions within a hospital have a risk of exposure to  bodily fluids and infections. Combining these contaminants with sharp objects and needles is a potentially dangerous situation.

Almost every hospital in the world has myriad manuals and policies in place to protect its staff from infection. Most schools also demand thorough vaccination records during registration – and yet, accidents happen. These can range from ending up with a passing cold to developing a more resilient infection from drug-resistant bacteria.

5 Tips to Protect Yourself and Get Through Clinicals Smoothly

There is no way to completely prevent unpleasant incidents. However, you can prevent them up to a certain point – and you can cover your bases ahead of time. Just remember that nurses have rights with abusive patients, so you can report it to someone no matter what happens.

Documentation not only helps protect you and explain your actions for posterity: it can also act as a warning for fellow students or staff members. If your hospital allows you to write on a patient’s notes (most likely, under an RN’s guidance or counter-signature), include any warnings or abnormal findings during your interactions with the patient.

Did Mr Jones insult you? Write down precisely what he said. Did he try to jerk off while you were checking his vitals, or did he seem to be trying to start an argument? Write that down, too. Were you asked to arrange anything on his bed by one of the staff members? Then record it as “under RN so-and-so instructions.”

A nurse’s pocket guide can be a powerful aid during your clinicals. You can use an eBook version or download a checklist from our app. Whenever you are asked to perform any procedure, browse quickly through the steps you need to perform until you feel you know them by heart.

If you are ever instructed to do something differently from what is stated in your textbook or to take a shortcut from best practice, remember which nurse asked and document it.

Contrast the instructions you are given on-site with those listed on your textbook, and steer clear from any shortcuts. If any staff nurse asks you to do something that you know is wrong, make sure to remember their name and speak to your clinical instructor.

Your student handbook should outline any policies that protect you from any injury or illness you may suffer during your clinical. At the very least, you should know:

To appear caring and soft-spoken, many of us fall into the trap of “letting things slide,” to over-apologize and speak in “maybe you could…?” and “it would be nice if…” terms.

Unruly or oppositional patients will take this to mean that your instructions don’t matter. They may also flag you as easier to intimidate. Possible harassers will often start with one off-color joke, and they will keep pushing until they receive an emphatic “no.”

This doesn’t mean you need to be bossy or humorless; however, you should maintain your boundaries and enforce them.

5. Speak up and report

Some people won’t take no for an answer. If a patient punches you, gropes you, or hurts you in any way, remember that it’s not your fault.

This happens to one in four nurses – and between 40% and 80% of them never report it. However, workplace violence is not “part of the job,” and patients should not be allowed to think it is.

The first thing you should do is report the incident to your clinical instructor and the floor manager or shift manager. Then, write down precisely what happened. Make sure you include the whole sequence of events, the date, time, and the names of the people involved.

Most likely, your school will handle any paperwork for you, and your clinical instructor will tell you how to submit it. However, even if you don’t want to press charges, you may have to recount the details later.

6. Ask for a chaperone

Most healthcare settings provide a chaperone whenever a patient requests it, or even by default during sensitive examinations (such as pelvic exams). This right is also extended to nursing students: if you ever feel uncomfortable while alone with a patient, just call for a chaperone.

Many experienced doctors and nurses routinely request chaperones whenever examining someone of the opposite sex, or whenever they feel it would be helpful. It goes a long way in preventing misunderstandings. Just make sure to document it!

The hospital environment is a high-risk one. The protocols you learned in the classroom were mainly designed to protect you – but they can’t eliminate the risk of workplace violence. In these cases, knowing how to speak up and who to speak out to will be invaluable.

Ximena is a copywriter and medical interpreter turned Nursing student. She feels very strongly about patient education and about opening healthcare access among women from immigrant and rural communities. During her downtime, she enjoys jogging, RPG gaming, and reading about classical history.

Note-taking is not one-size-fits all, so I’ve outlined some tips for taking notes in nursing school and considerations that can help you pinpoint the note-taking method that will work best for you.

Going to Nursing School at 30 – It’s Not Too Late!

Switching careers after the age of 30 is often seen as an unorthodox choice. Yet, it is a surprisingly common one in nursing. As someone who will not become an RN before 34, I can shed some light on the practicalities and emotions that come with joining nursing as an older adult.

A Day in the Life of a Nursing Student

As someone who has completed both a B.A. and a full-time nursing program, I won’t hesitate to say it: being a student nurse is significantly more demanding than pursuing a regular undergraduate degree.