Specialty Spotlight: Why Should I Choose Internal Medicine?

So you’re thinking about becoming an internist? We sat down with Lindsay J., MD from Washington State to talk about what it’s like to work in this specialty. Learn about her experience and gain general insights on working in internal medicine. 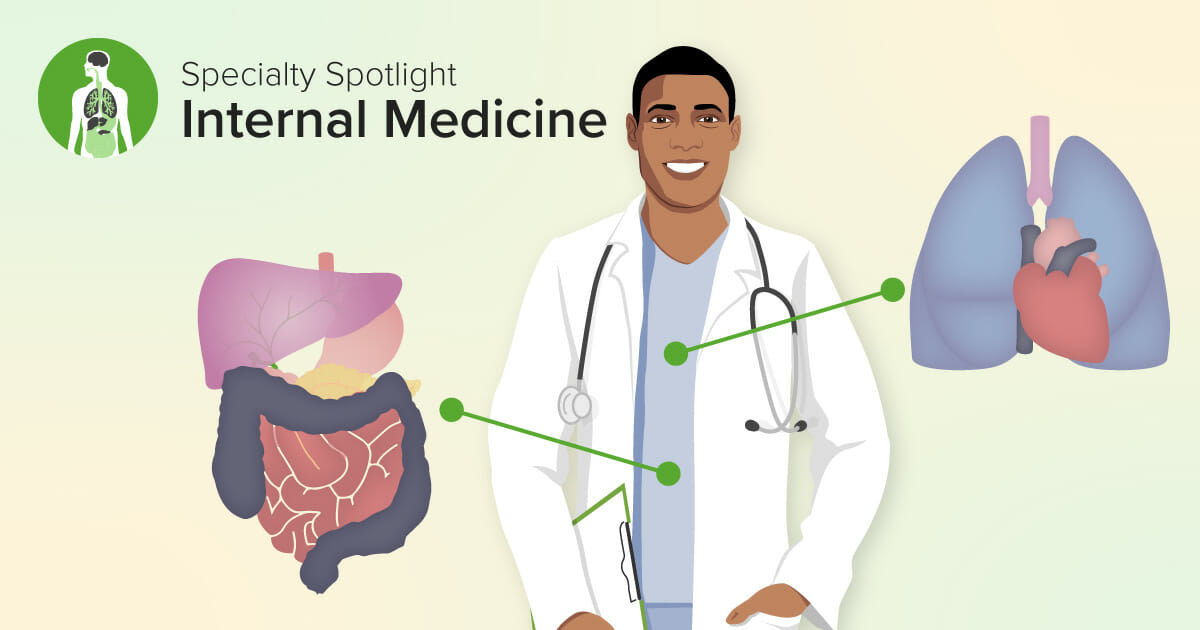 Interview: What is it Like Being an Internal Medicine Physician?

Q: Hi Lindsay! Which medical school did you attend, where did you do residency, and what was that like?

A: I went to Creighton University in Omaha, Nebraska. Since I was there for undergrad as well, I felt super comfortable as I knew the professors already. The school in general has a more collaborative feel, compared to other, more competitive med schools. People would study together, so that was nice.

For residency, I was at Brown University in Providence, Rhode Island. That was definitely a bigger leap, transitioning to this Ivy League, super prestigious place, as such places are generally just more high-stakes and competitive. However, it was probably one of the more “touchy-feely” Ivy Leagues; it was supportive, and they made sure we had a work-life balance and a safe learning environment. I was there for three years then went on to become an internal medicine hospitalist!

A hospitalist is a licensed physician who practices in a hospital and treats an array of conditions. They provide specialized care for complex patients, lead the medical team in coordinating care for a patient, and help treat multiple body functions instead of specific organs (which would be the job of the respective specialist). Unlike an internist who could see a patient their whole life, hospitalists only see a patient for the duration of their hospital stay and usually only work in a hospital setting.

Q: Why did you decide to become an internist?

A: I always thought I’d be a cardiothoracic surgeon when I was applying and interviewing for med school. Then I changed my mind 4–5 times through med school. I went through general surgery, pediatrics, cardiology, then finally arrived at internal medicine hospitalist. It kind of evolved through my second year clinical courses, and then the third year rotations definitely had a big impact. I found for myself that surgery is just too “intense” and not the right fit for my personality. Pediatrics or internal medicine (IM) fit better. I especially like the problem-solving aspect of IM, as well as working with more acute patients.

Q: What is your typical schedule? What does a typical day as an internal medicine physician look like?

A: In the clinical setting as a hospitalist, I used to work in a 7-day on, 7-day off rhythm, 12 hours per day. Either 7 p.m.–7 a.m. or the other way around. I actually liked nights better because they are a little less stressful; there is less of the social aspect or coordinating that takes up a lot of time during the day, such as discharging patients or handling other organizational tasks. Days in general are more packed.

Now I work 8 hours a day, Monday through Friday, for Lecturio as a Senior Medical Editor, where I do a lot of fact checking and writing medical content. I quite enjoy having flexible hours – I can take a lunch at 11 if I want to! In a clinical schedule, you often won’t get a lunch break at all.

Q: What’s the best part about being an IM hospitalist? What’s the most challenging part?

A: Best part: You’re kind of a jack of all trades!

You really gain a broad knowledge base of many topics. Also, you just see a lot of different, interesting, and acute cases – you’re taking care of the patents who have been admitted and thus really have a hand in turning around a patient’s condition to make them better.

Biggest challenge: As a hospitalist, you don’t have the person-to-person contact that, for example, a general practitioner (GP) would have. Patients are not very trusting of hospitalists and you might get a lot of rather rough personalities. So you’re dealing with distrustful patients or patients’ families who you may have to convince of a treatment, on top of not having enough time to really connect with patients. But GPs aren’t in the hospital much, and I wanted that: to see the improvement of patients directly.

Q: Tell me something unique about your field – any crazy stories?

A: Probably the one that stands out the most to me was a pretty rough case. I admitted a patient at 6 a.m. who had a GI bleed from diverticulosis. At first, he was stable and wasn’t actively bleeding, so I talked to a GI doctor, a plan was made, and I handed him off. Around 9 p.m. the next day, he had a ton of blood coming out and he started fainting. I’m trying transfusion in the meantime, we had no team for doing an endoscopy, I’m bothering the surgeon about possibly taking the colon out but they wouldn’t because the patient might still be bleeding then… I also tried to transfer the patient to another hospital three hours away, but there was fog so no ambulances or helicopters could go. I had to empty our blood bank into this guy to keep him alive overnight. But he ended up living! So that was a lot for one night. This really illustrates the kind of situation you might find yourself in: lots of problem-solving and knowing that everything could “go to shit.”

Studying medicine has never been easier.

Set yourself up for success with Lecturio.

Q: What advice do you have for students deciding on their specialties?

A: Just have an open mind when doing rotations!

Even if you’re dead set on becoming a neurosurgeon, you might change your mind. Even if you don’t like the field, try to get something out of it, because you may need this knowledge later – regardless of which specialty you end up choosing.

At a Glance: Facts About Becoming and Being an Internist

How long is internal medicine residency, and how long does it take overall to become an IM physician?

It will take about 11 years to become an internist:

What do internal medicine doctors do?

Internists are doctors who provide care in treatment and prevention of a variety of different diseases. It can range from well-known health issues (such as heart disease) to more complex and rare diseases. (American College of Physicians)
They also specialize in organs including heart, kidney, liver, and lungs (Memorial Regional Health):

An internist’s current lifestyle can range from serving on the front lines fighting COVID to adjusting to virtual care while in-person care may still be considered unsafe. (Medscape, 2021)

Nearly half of internists say they struggle with work/life balance. While there was already a rise in the burnout rate pre-pandemic (with contributing factors like spending a lot of time at work but receiving insufficient compensation or reimbursement), there currently is an increase in the burnout rate while internist try to maintain personal wellness.

Prior to COVID-19, internists largely reported feeling happy outside of work.

How much does an internist make?

The average internist salary as reported by different sources:

The Essentials of Medical Residency

Medical residency will be a challenging and rewarding moment in your career. Get to know the different types of residents, how to prepare your residency application, and what you’ll be doing once you are a resident.

The impact of COVID-19 on medical education cannot be understated. Learn how Paulina, a Polish medical school graduate, navigated her final year of medical school being disrupted by the pandemic.