Antivirals for Herpes Virus
Antiviral agents against human herpesviruses (HHVs) include acyclovir, cidofovir, and foscarnet. Human herpesviruses are DNA viruses in the Herpesviridae family. Herpes simplex virus (HSV), varicella-zoster virus (VZV), cytomegalovirus (CMV), Epstein-Barr virus (EBV), and HHV-8 belong to the Herpesviridae family. Antivirals against the group generally act via inhibition of DNA polymerase. Acyclovir (the prototypical nucleoside analog) requires viral kinase for phosphorylation to become a triphosphate, which is incorporated in viral DNA. Cidofovir requires phosphorylation by host cellular kinase, which allows cidofovir to have activity against mutated viruses and become deficient in viral kinase. Foscarnet (a pyrophosphate analog) does not require phosphorylation. Nephrotoxicity is a shared adverse effect in the agents. Acyclovir can also cause obstructive crystalline nephropathy and foscarnet carries a risk of electrolyte abnormalities and seizures. The nephrotoxic effect of cidofovir can be reduced with IV saline and probenecid.
read more 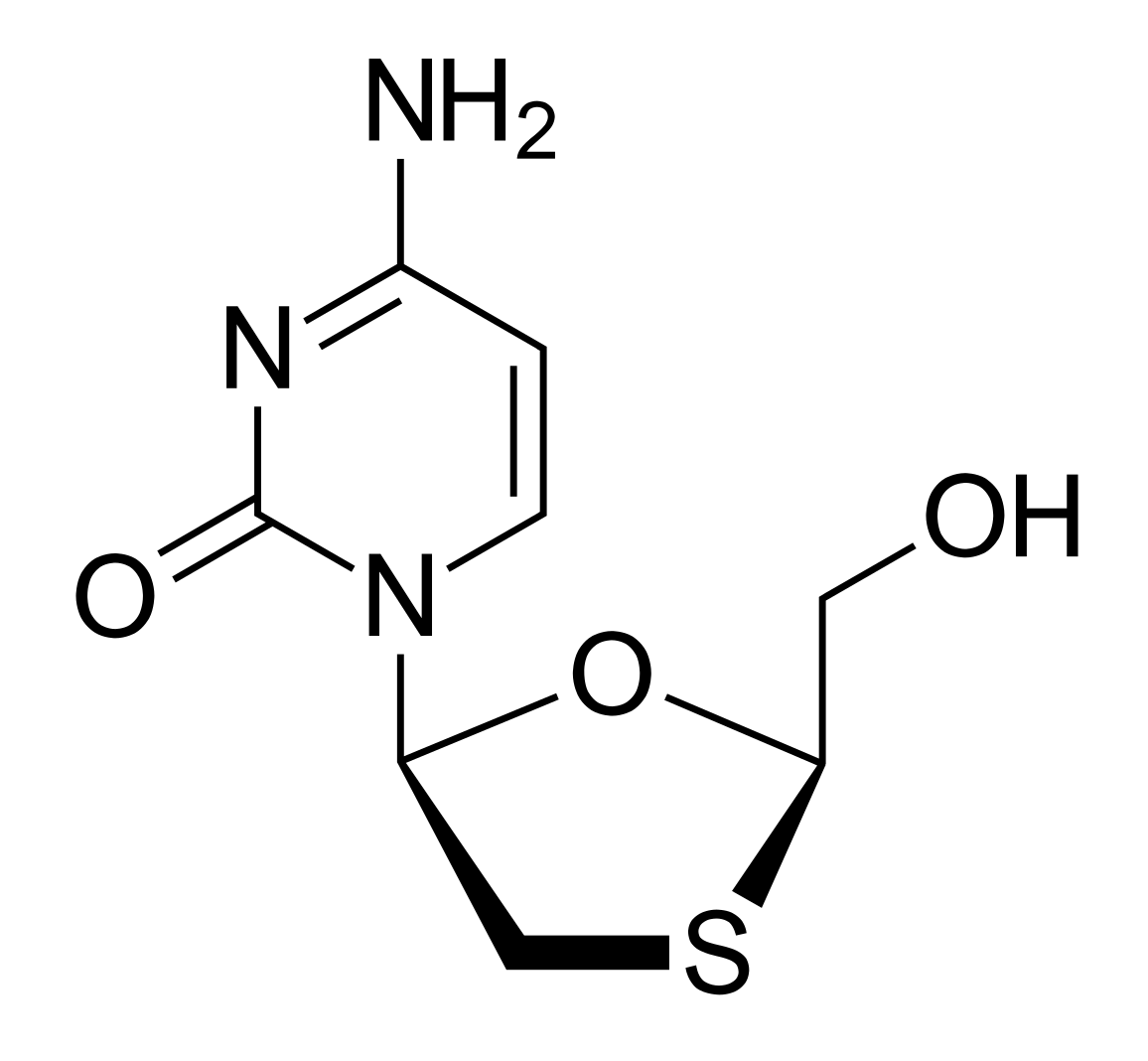 Antivirals for Hepatitis B
Antivirals for hepatitis B include the nucleoside/nucleotide analogs, also known as nucleoside/nucleotide reverse transcriptase inhibitors (NRTIs). Because of their similar chemical structure to nucleosides and nucleotides, NRTIs are able to integrate into viral DNA during the replication process. This process inhibits the function of viral RNA-dependent DNA polymerase, resulting in chain termination. All of these medications are administered orally and are excreted by the kidneys. Indications include chronic hepatitis B infection, and some (such as lamivudine) are also used for HIV. Adverse effects include GI symptoms, evidence of mitochondrial toxicity (such as lactic acidosis), and rebound infection upon discontinuation.
read more 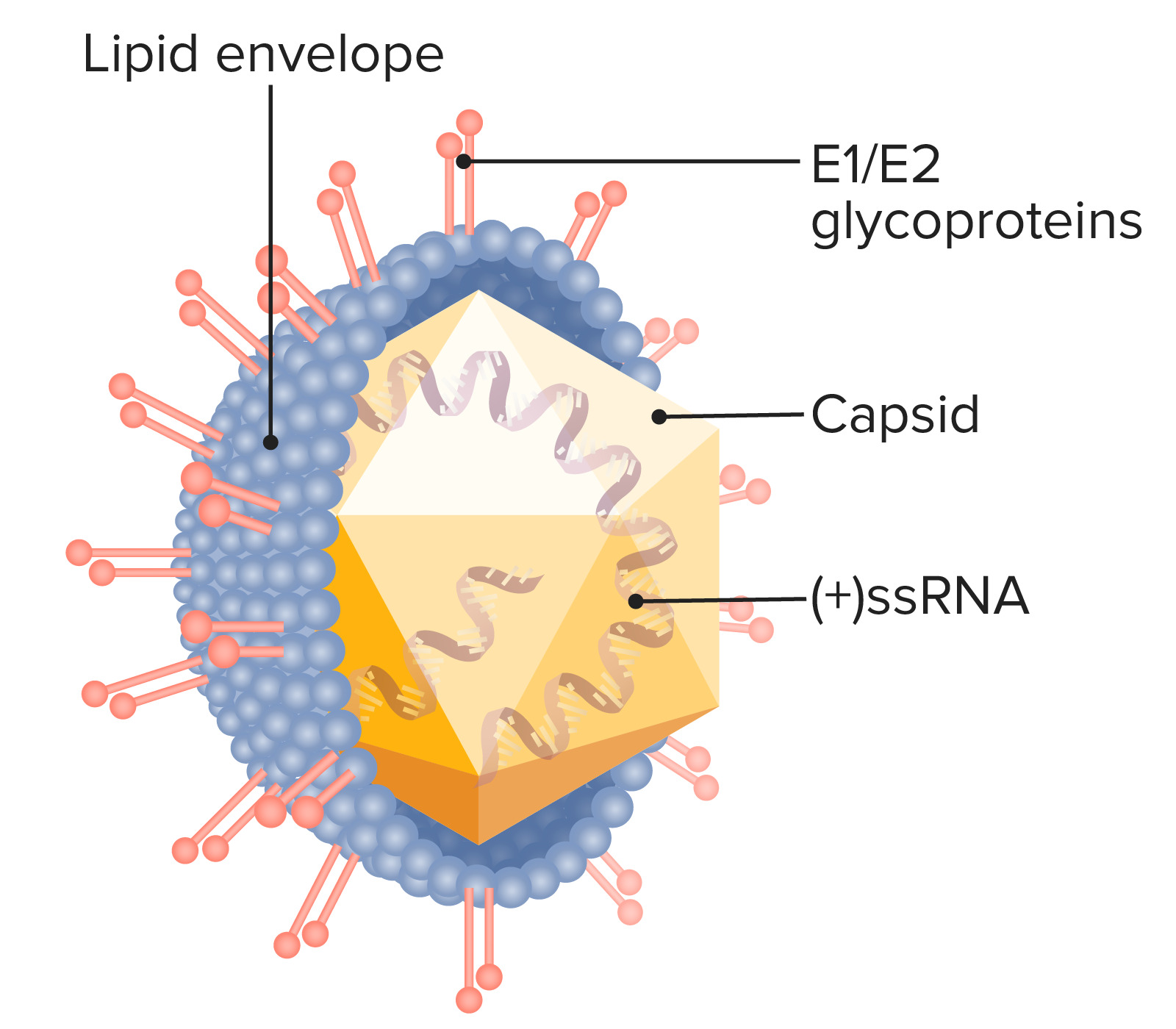 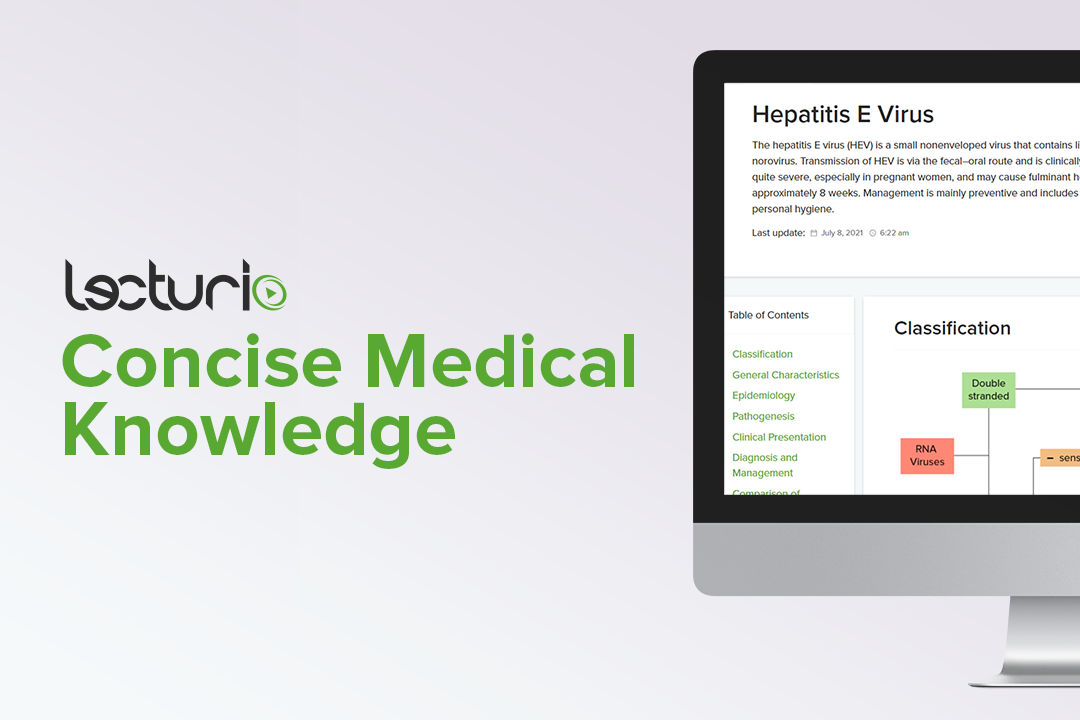 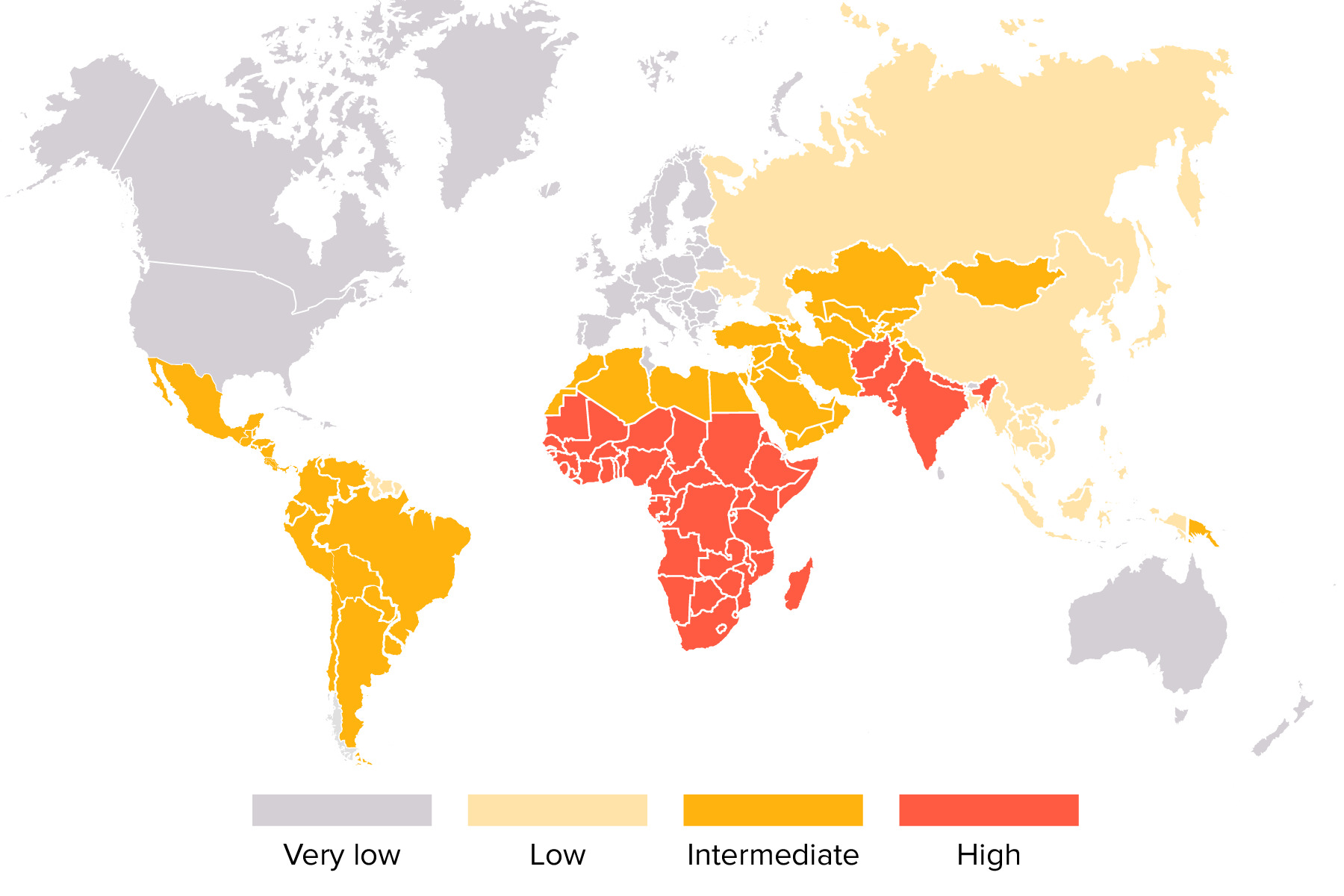 Hepatitis A Virus
The hepatitis A virus (HAV) is a nonenveloped virus of the Picornaviridae family with single-stranded RNA. The virus replicates in the liver, is excreted in the bile, and is found in high concentrations in the stool of acutely infected individuals. The 2 main routes of infection are consumption of contaminated food or water and direct contact with an infected person. HAV causes an acute, highly contagious hepatitis with unspecific prodromal symptoms such as fever and malaise followed by jaundice and elevated liver transaminases. Most individuals recover fully within a few months, and the immunity resulting from HAV infection is lifelong. Unlike hepatitis B and C, HAV infection does not result in chronic infection or chronic liver disease. Preventive vaccination is available for HAV and is recommended for individuals with increased risk of exposure and, in some countries such as the United States, for all children > 12 months of age.
read more 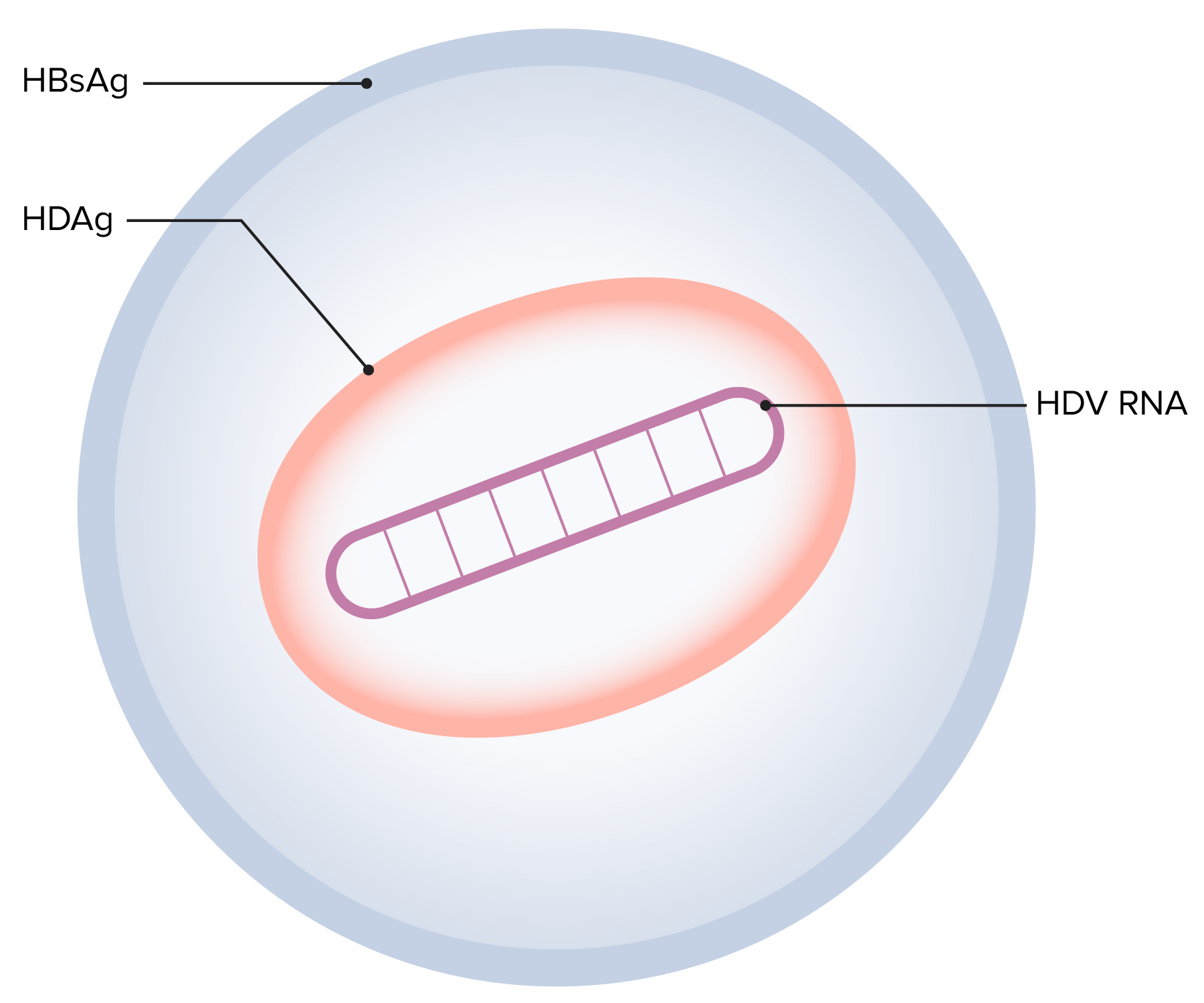 Hepatitis D Virus
Hepatitis D virus (HDV) is a small enveloped, single-stranded RNA virus. Hepatitis D virus is considered a satellite virus, as it requires the presence of hepatitis B virus (HBV) for assembly and secretion. Therefore, in order for an individual to contract hepatitis D, coinfection or superinfection with HBV is required. Like HBV, HDV is transmitted parenterally, through unprotected sexual intercourse, or perinatally. Clinical presentation is that of a classical viral hepatitis, including coinfection of HDV and HBV, which is considered the most serious form of hepatitis because of the high mortality rate. For acute cases, management is supportive, whereas for chronic cases, pegylated interferon alfa (PEG-IFN-α) is needed.
read more 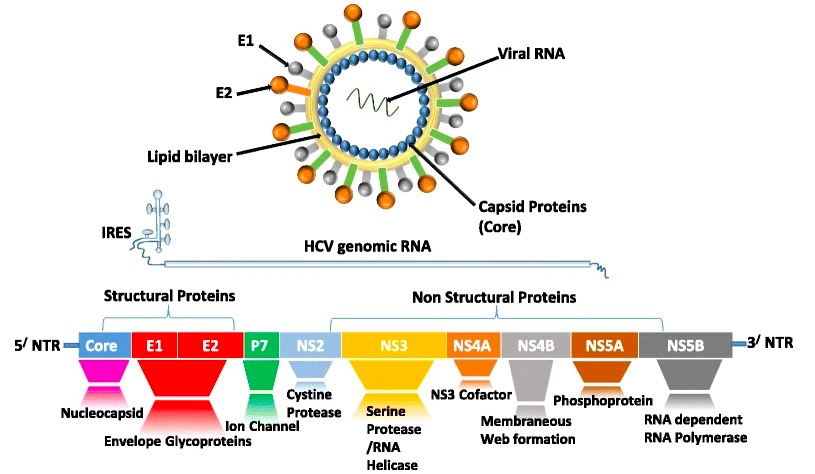 00:00 Let's move on to anti-hepatitis drugs. 00:03 Now the anti-hepatitis drugs really the main say of therapy has been the interferon alpha agents. 00:12 Now interferon alpha seems to work in viral penetration. 00:16 And by inhibiting viral penetration, you are inhibiting probably the first or second step in viral replication. 00:23 Anti-hepatitis B drugs are suppressive not curative. 00:28 So we are not necessary curing the patient with hepatitis B. 00:32 Anti-hepatitis C drugs are targeted for viral eradication. 00:38 And in fact we have seen eradication in many patients. 00:40 Let's talk about interferon alpha. 00:45 Now interferon alpha is a cytokine. 00:48 And it acts through the Janus kinases. 00:51 So Janus was mythical Greek god, actually he was an Olympian, who had ten heads. 01:00 And so we talk about Janus kinases as being those agents that seem to have a whole bunch of faces to them. 01:08 Now the Janus kinase is phosphorylate STAT that stands for Signal Transducers and Activators of Transcription. 01:16 So we call these JAK STAT receptors. 01:20 And you can see the JAK portion down at the bottom. 01:24 Now this causes an increase production of antiviral proteins. 01:29 There is a specific activation of ribonuclease that degrades the viral messengerRNA when you activate these agents. 01:37 This promotes the formation of natural killer cells that destroy infected liver cells. 01:42 So that's why interferon alpha is such an important component of our immune system. 01:48 Now, intramuscular injections, interferon alpha are usually how we administer this medication. 01:55 The formulations vary from time and place. 01:59 Now the absorption is relatively slow. 02:02 It's given about two or three times per week. 02:04 We do have something called pegylated forms that can be given once a week. 02:09 Pegylated forms are first to encasing the inferon in certain types of almost mycells or liposomes. 02:16 The elimination is through hydrolysis and proteolysis in the kidney. 02:21 In terms of where we use these medications, they are most commonly used in chronic hepatitis B. 02:27 But we have actually used in hepatitis C as well, usually acute hepatitis C. 02:32 And we often combine it with ribavirin. 02:35 In less common uses, we've used it in Kaposi's sarcoma in HIV patients. 02:42 We've also used in papillomatosis and genital warts as well. 02:46 Although that's actually much less commonly used. 02:50 Now I have another category here called "Others" under anti-hepatitis drugs. 02:55 It's actually quite a large category. 02:57 Now we already spoke about interferon alpha. 03:00 So I'm not going to go through it again. 03:02 Now the other drugs that we use with hepatitis includes the DNA polymerase agents, the nucleoside inhibitors, the broad spectrum replication inhibitors and another set of drugs that I just call miscellaneous. 03:18 Let's take a look at the DNA polymerase inhibitors. 03:21 The prototypical drug of the DNA polymerase inhibitors is adefovir. 03:28 It inhibits DNA polymerase of hepatitis B virus which results in chain termination of -- results in chain termination after incorporation of the virus into the cell. 03:40 It has good oral bioavailability and it's unaffected by foods. 03:45 You can do dose reduction in renal dysfunction because it is excreted by the kidney. 03:50 It works quite well against viruses that are resistant to lamivudine which is another antiviral agent that I'll talk about. 04:01 In fact let's talk about lamivudine now. 04:03 It's a nucleoside inhibitor. 04:06 And if you recall nucleoside inhibitors are working on that very important step of nucleic acid synthesis. 04:12 It inhibits HIV reverse transcriptase. 04:15 It's a very long acting agent in hepatitis B infected cells. 04:20 Compared to say it's limited activity in HIV infected cells. 04:25 It's often used as monotherapy in hepatitis B. 04:30 It's relatively non-toxic and it causes a rapid suppression of hepatitis B viruses. 04:38 Other agents that are active against hepatitis include the broad spectrum replication inhibitors. 04:46 We also know this is ribavirin and it's actually quite a well known drug. 04:51 It inhibits replication of a wide range of DNA and RNA. 04:56 It effects influenza A and B. 04:59 It effects parainfluenza and respiratory syncytial virus. 05:04 It also is active against paramyxoviruses and hepatitis C as well as HIV. 05:10 In terms of the mechanisms of action, we're not entirely sure how this particular drug works. 05:17 We'll believe that it acts directly with guanine triphosphate to somehow cause an inhibition and capping of the viral messengerRNA. 05:24 It also blocks RNA dependent polymerases which is why we use it so often. 05:31 Now in terms of using this medication, remember that in order to improve it's absorption we actually want more acidity in the stomach. 05:43 So we tend to tell patients to avoid antacids when you're taking ribavirin. 05:48 It's eliminated by the kidney so we have to act dose reductions if there is renal failure. 05:54 We often use it with interferon alpha in chronic hepatitis C. 06:00 Remember that monotherapy with this particular agent is not very effective. 06:05 In terms of toxicity, there's a dose dependent hemolytic anemia that's associated with this drug. 06:11 And it is contraindicated in pregnancy. 06:16 Miscellaneous drugs use to treat hepatitis patients include the following. 06:23 Now we have nucleoside analogs that work against DNA polymerase. 06:31 We have agents that are approved for lamivudine resistance. 06:36 We have agents that inhibit RNA polymerase. 06:40 This particular agent is quite active in hepatitis C virus. 06:45 And we actually can achieve 95% curates when used in association with ribavirin. 06:51 Boceprevir is also a protease inhibitor and it's used with ribavirin as well.

The lecture Hepatitis Treatment – Antiviral Drugs by Pravin Shukle, MD is from the course Antimicrobial Pharmacology. It contains the following chapters:

Which anti-hepatitis drug is a nucleoside inhibitor?

Which statement regarding adefovir is NOT correct?

A patient comes to you with a chronic hepatitis C infection. He also has peptic ulcer disease and for which he is taking proton pump inhibitors. Which drug would you NOT prescribe?

Which anti-hepatitis drug is contraindicated in pregnancy?