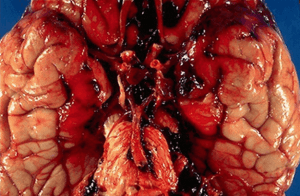 00:01 Alright, so now we’re gonna move on to traumatic subarachnoid. 00:04 So in the case of subarachnoid hemorrhage, you’ll see hyperdensity or blood, either in the sulci of the brain or in the basilar cisterns and you can see this in either a localized or diffuse way. 00:17 In the diffuse one you can see that the blood is on both sides of the brain that it sort of percolated through the sulci in the entire frontal region of the brain so it’s much more extensive than the localized one on the other side. 00:33 You can get blood in the cerebral aqueduct or in the 3rd ventricle and if you get blood in that region and it clots it can actually obstruct CSF flow and cause hydrocephalus so this can be quite dangerous when they involve the ventricular system because they can lead very rapidly to elevated intracranial pressure from hydrocephalus. 00:53 So pathophysiologically, subarachnoid bleeds occur when there’s blood between the pia mater and the arachnoid mater. 01:01 There are few different mechanisms for this so if you get a cerebral contusion with small vessel bleeding, the blood can sort of diffuse into that subarachnoid space or you can get vascular injury from shear forces as well leading to bleeding into the subarachnoid space. 01:17 You can see subarachnoid blood with either mild or severe trauma. 01:21 This is a very common finding in young patients who have acute injuries and the volume of blood in the subarachnoid space correlates very strongly with their initial GCS and with the prognosis. 01:35 Now, subarachnoid bleeds can be medical as well so you always wanna consider the possibility that the patient has had an aneurysmal cause of hemorrhage rather than a traumatic cause of hemorrhage. 01:48 So generally, these patients should get some type of vascular imaging to rule out the possibility of an aneurysm. 01:54 Generally, the treatment for subarachnoid hemorrhage in the trauma setting is just gonna be supportive care and observation in an intensive care unit setting. 02:03 But these patients will often have delayed vasospasm days after their initial trauma and in some cases might need to be treated with calcium channel blockers, specifically nimodipine for that, however, that’s not really an issue that we address in the Emergency Department. 02:18 Alright, moving on to intraparenchymal hemorrhage. 02:20 So here you see a very well demarcated bright white hyperdense lesions that are actually inside of the brain tissue. 02:31 So there are collections of blood that are focal that are surrounded on all sides by brain parenchyma. 02:38 This can be seen immediately in the post-trauma setting but they more commonly evolve over hours to days. 02:45 So in some cases you know the patient might come in and have a negative initial head CT or a very small area of contusion on their head CT that actually goes on to develop into a much larger intraparenchymal hemorrhage. 02:59 Mass effect is quite common with this. 03:02 This can be neurologically devastating and you can see in this particular case you’ve got the two bright white hematomas that are marked on the slide and you’ve got evidence of mass effect, so you’ve got effacement of the ventricle, you’ve got midline shift and if you note up on the top of the image there’s actually a ventriculostomy catheter in place so this patient is having continuous intracranial pressure monitoring via the ventriculostomy catheter and they can have CSF drained out if necessary to reduce the intracranial pressure if it’s rising. 03:39 So pathophysiologically, these hematomas happen anytime, blood clots within the brain tissue and it’s typically gonna be associated with vascular injury from direct trauma. 03:49 Again, these are usually associated with severe acute trauma. 03:54 It takes a lot of force to do this to the brain, however, because you’re dealing with relatively small vessel bleeds the findings on CT scan and the neurologic findings might evolve slowly over hours to days. 04:06 Anytime you have an intraparenchymal hematoma your care is gonna be largely supportive so the most important thing you can do is stop them from bleeding further so you wanna reverse any anticoagulation, you wanna control their blood pressure and you wanna make sure that you control their intracranial pressure as well which we’re gonna talk about in more detail shortly.

The lecture Traumatic Subarachnoid & Intraparenchymal Hemorrhage by Julianna Jung, MD, FACEP is from the course Trauma (Emergency Medicine). It contains the following chapters:

Which calcium channel blocker is used in the management of delayed vasospasm in traumatic subarachnoid hemorrhage?

Which of the following statements about intraparenchymal bleeding is NOT true?

Traumatic subarachnoid hemorrhage is the collection of blood between which layers?

The presentation is very well explained, with clinical and imaging presentation. highly recommend.

The presentation is very well explained, with clinical and imaging presentation. highly recommend.