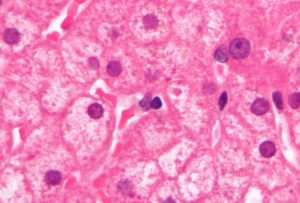 Viral Hepatitis — Epidemiology and Symptoms
Viral hepatitis can be caused by different kinds of viruses which include hepatitis A, B, C, D, and E. These viruses cause targeted inflammation of the liver. In the acute stage, patients develop non-specific symptoms, such as nausea, vomiting, anorexia and abdominal pain. Later on, jaundice becomes evident. During this stage, supportive therapy is important. Antiviral therapy is indicated in the acute and chronic stages of hepatitis B and C.
read more
Load more
Share
Ask Questions
Take Notes
Download Slides
Report Mistake
Comments
show all Show less
My Notes
show all Show less
Learning Material 2
show all Show less
Report mistake
Transcript
0 of 0

00:00 In our discussion of Gastrointestinal Tract Infections, we turn now to Hepatitis. You could define hepatitis as some kind of hepatocellular injury caused by one of these hepatotropic viruses: A, B, C, D or E. Let's talk some about the epidemiology first of hepatitis A. This viral infection has a worldwide distribution, it is spread person to person like close contact with the person or it can be spread by foodborne or waterborne methods. It is endemic in countries with poor hygiene and poor sanitation. Because of that, most people are infected by the age of 10. In developed countries, about 30% of us are infected by the age of 50. Hepatitis B is a different story. One-third of the world population had been infected at some point in their lives and the prevalence is greater than 8% in Asia, Africa and the Western Pacific, 2 to 7% in Southern and Eastern Europe but less than 2% in Western Europe, North America and Australia. 01:34 There are 400 million people who have a chronic hepatitis B infection and the carrier rate in children is significantly greater than that of adults. In other words, children are chronically infected and it probably because they get infected at a very early age when their immune system is not fully mature and when your immune system is fully mature that's what gets rid of the cells that have hepatitis B in them. So if you have an immature system, then you don't get rid of all the infected cells. Hepatitis C affects 3.6 million people in America. Look at the difference in percentage, 2.7 of those 3.6 have chronic hepatitis C. So the incidence of chronic hepatitis with C is tremendous. There is, however, a substantial decrease in the annual instance of new infection since we've began to learn about this. For example, in the mid 1980s there were 230,000 cases per year and presently 17,000 cases per year. There are about 15 million people in the world who are infected with hepatitis D and that includes 5% of 300 million hepatitis B virus infected persons and that's because hepatitis D is dependent on the presence of hepatitis B. 20 to 40% are infected in Central America, the Middle East and the Mediterranean Basin. It's uncommon surprisingly in Southeast Asia in China and in western countries it's almost exclusively found in intravenous drug users. Hepatitis E fairly recently discovered as a zoonotic disease. It accounts for 30 to 60% of sporadic hepatitis in India more than hepatitis A virus. So this is a common problem. Almost 20% mortality occurs in a woman who gets hepatitis E when pregnant, very serious.

The lecture Hepatitis: Definition and Epidemiology by John Fisher, MD is from the course Gastrointestinal Infections.

According to the lecture, what is the most common cause of sporadic hepatitis in India?

Which of the following hepatotropic viruses is most strongly associated with high mortality rates during pregnancy?

Which of the following statements regarding hepatitis D is MOST ACCURATE?

Like it very much. Easy to understand, complete and concrete.

Like it very much. Easy to understand, complete and concrete.