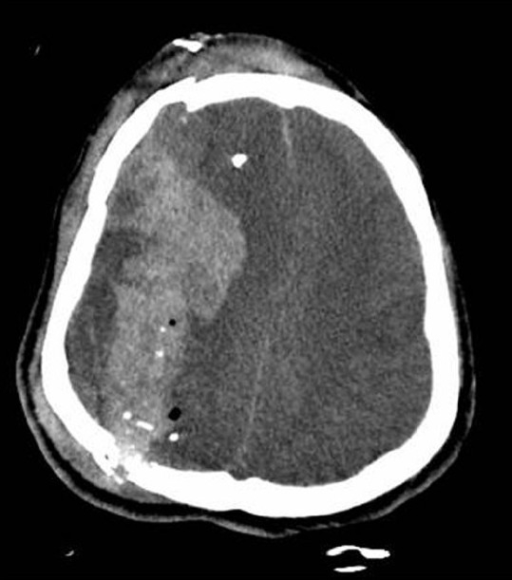 Head Trauma
Head trauma occurs when external forces are directed to the skull and brain structures, resulting in damage to the skull, brain, and intracranial structures. Head injuries can be classified as open (penetrating) or closed (blunt), and primary (from the initial trauma) or secondary (indirect brain injury), and range from mild to severe and life-threatening. The majority of cases are mild, but presentation can vary from a mild concussion to a comatose state depending on the severity of the insult. Management ranges from observation to intensive care monitoring and neurosurgical interventions. Prognosis is good for mild injuries, but severe trauma can result in death or permanent damage.
read more 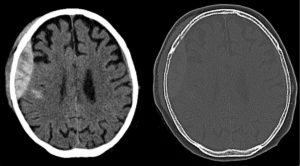 Traumatic Brain Injury (TBI): Epidural Hematoma (Extradural Haematoma) — Symptoms and Treatment
This article provides a brief overview of neurotrauma, its classification and differential diagnosis, diagnosis and management. Neurotrauma is a common presentation in emergency departments across the world and is often an emergency situation. Patients who are not diagnosed and treated promptly can quickly succumb to comas and often irreversible damage or death. As such, a familiarity with each clinical diagnosis is needed and this article should provide the basis for that. We look at traumatic brain injuries (causing concussions, contusions and diffuse axonal injuries) along with bleed disorders like epidural hematomas, intraparenchymal hemorrhage, subdural and subarachnoid hemorrhages. A basic definition, pathophysiology and etiology is provided for each.
read more
Load more
Share
Ask Questions
Take Notes
Download Slides
Report Mistake
Comments
show all Show less
My Notes
show all Show less
Learning Material 2
show all Show less
Report mistake
Transcript
0 of 0

00:01 So here’s an example of an epidural hematoma. 00:04 So you can see that there is a large collection of blood on the right side of the brain here and it’s hyperdense so it’s white. 00:11 It’s biconvex or lens shaped that’s very characteristic of an epidural hematoma if it’s bowed out on both sides that suggests that it’s an epidural. 00:23 It doesn’t cross the suture lines, it’s very commonly associated with mass effect and on this particular CT, you can actually see the midline is bowing over to the contralateral side. 00:33 And then it’s got a heterogeneous appearance so that suggests that there's blood of different ages in there in particular, in the case of epidural hematoma that can suggest active bleeding that is ongoing right now. 00:46 So this particular hematoma is in the parietotemporal region which is the most common place that we see epidural hematomas. 00:54 They are most commonly associated with injuries to the middle meningeal artery and that’s about two thirds of cases you're gonna see them in this region of the brain. 01:03 So epidurals are caused by direct blows to the skull that separate the dura mater from the skull. 01:10 Sheer forces associated with the blow will disrupt blood vessels which are typically arteries, again, the middle meningeal arteries is the most commonly affected one. 01:20 This allows blood to collect in between the skull and the dura and ultimately it leads to compression of the brain and elevated intracranial pressure if it goes on untreated. 01:31 Now, the classic presentation of an epidural hematoma is an immediate period of loss of consciousness right after the blow to the head followed by the patient waking up and having what’s called a lucid interval. 01:44 So they’ll wake up and they’ll be pretty much okay, however, they will progressively deteriorate overt time and become more and more obtunded until they become comatose. 01:56 Now epidurals are almost always associated with acute trauma and it takes a lot of force to produce this type of bleeding in the brain so this is gonna be associated with high velocity high force blows to the head and because you're dealing with arterial bleeding, the symptoms often evolve very rapidly so these patients would go from being like pretty good, awake and talking to completely comatose in a very short period of time. 02:22 The management of epidural hematoma is always gonna be emergent surgical evacuation. 02:27 These patients need to go to the operating room and they need to have the blood drained out of their brain otherwise the bleeding is gonna continue, the mass effect is gonna get worse and the patient is ultimately gonna herniate. 02:40 Let’s move on now to subdural hematoma. 02:44 So subdurals also appear hyperdense or white when they're acute but they can become isodense or gray when they are more subacute. Subdurals accumulate more gradually overtime and in many cases, if they're chronic, they can be hard to see because they're basically the same density as the brain. 03:04 Unlike epidurals, subdurals are crescent shape so they're not biconvex they're convex on one side and concave on the other sort of like a crescent moon. 03:13 Subdurals will cross the suture lines because they are inside of the dura which is not tethered to the skull. 03:19 The blood can sort of intercalate all around the brain and you may see mass effect in this case. 03:26 Now, the image that we're showing here is a very, very large, very dramatic subdural hematoma. 03:31 You can see that there is both bright white hyperdense blood as well as more gray isodense blood so this suggest that they're sort of acute on-chronic bleeding. 03:42 There's blood of different ages in this collection so the patient probably has had it for some time. 03:48 There is significant mass effect in midline shift so you can see that the midline is bowed all the way over to the contralateral side. 03:58 There's effacement of the ventricles so this is a large and very dangerous subdural hematoma. 04:05 Now the pathophysiology of subdural hematoma is a little bit different. 04:08 So in the case of subdural, some type of sheer force disrupts bridging veins in between the brain and the dura. 04:14 This allows blood to collect in that region between the brain and the dura and eventually, if the bleed gets large enough, you may see compression of the brain and elevated intracranial pressure but because we're not dealing with arterial bleeding, this accumulate much more slowly and in many cases will not produce mass effect. 04:34 This also can be associated with relatively mild trauma. 04:38 So patients can come in with subdural hematomas with no significant history of trauma or very minimal trivial trauma so you wanna have a high index of suspicion for this. 04:48 It’s also not uncommon that patients will present sub-acutely so they hit their head several days ago, their blood has been accumulating gradually and now they are becoming symptomatic so they make their way to the ED. 04:59 We see subdurals much more often in elderly patients and patients who are anticoagulated so this is not really a disease of young people the way that epidurals are, and the symptoms tend to evolve more slowly overtime because the blood does accumulate more gradually. 05:14 Patients like the one in our last CT image do require emergent surgical evacuation. 05:20 If they've got large hematomas, if they’ve got a lot of mass effect or of they have a lot of neurologic dysfunction, however, for small bleeds, it might be appropriate to simply observe the patient if they're neurologically intact and kind of see if the blood is continuing to accumulate, if the bleed is expanding, if the patient is getting worse, etc.

The lecture Epidural & Subdural Hematoma by Julianna Jung, MD, FACEP is from the course Trauma (Emergency Medicine). It contains the following chapters:

Which intracranial hemorrhage classically presents with a lucid interval?

Which artery is most commonly involved in epidural hematoma?

What type of intracranial hemorrhage occurs when cerebral bridging veins are disrupted due to shear force?

What is the most common location of epidural hematomas?