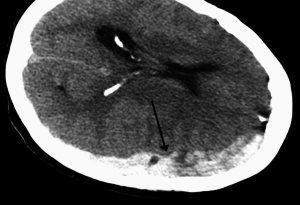 Intracranial Hemorrhage: Different Types and Epidemiology
Intracranial hemorrhage is a medical emergency that occurs in adults, but can also occur in children and neonates. As the name suggests, intracranial hemorrhage is bleeding and the accumulation of blood within the skull at an abnormal location leading to the formation of a hematoma. A hematoma is the collection of blood outside of blood vessel. Intracranial bleeding can lead to stroke, neurological deficit, brain matter herniation, and even death.
read more
Load more
Share
Ask Questions
Take Notes
Download Slides
Report Mistake
Comments
show all Show less
My Notes
show all Show less
Learning Material 2
show all Show less
Report mistake
Transcript
0 of 0

00:01 Hi. We’re gonna be talking about intracranial hemorrhage. 00:05 What is intracranial hemorrhage? Intracranial hemorrhage is bleeding in the brain tissue and it represents about approximately 13% of strokes are due to rupture of blood vessels which lead to hemorrhage. 00:19 Now, here we’re gonna be talking about two different entities. 00:22 We’re gonna be talking about intracerebral hemorrhage which is bleeding into the brain tissue itself and then subarachnoid hemorrhage which is bleeding into the subarachnoid space. 00:33 What we’re not gonna be talking about here is we’re not gonna be talking about traumatic injuries like epidural hematoma, or subdural hematoma, and we’re gonna be talking about spontaneous subarachnoid hemorrhage which is distinguished from a traumatic subarachnoid hemorrhage, or subarachnoid hemorrhage related to head trauma. 00:51 Spontaneous intracerebral hemorrhage takes place in 10 to 15% of all acute strokes. 01:00 The most important thing to know about intracerebral hemorrhage which is bleeding into the brain tissue itself is that there's a very high morbidity and mortality associated with it. 01:11 The 30 day mortality with intracerebral hemorrhage is approximately 50% and of those patients, half of them will die in the first two days, and one in five, so approximately 20% will live independently at six months. 01:27 So lots of morbidity and mortality associated with this presentation. 01:32 There’s two major causes for intracerebral hemorrhage. 01:38 So the first is hypertensive vasculopathy. 01:40 So this is patients who have chronically elevated blood pressure and the blood vessels just weaken and then eventually they rupture. 01:48 This is one of the reasons that we tell patients all the time how important it is to take their blood pressure medicine because we don’t take your blood pressure medicine and the blood pressure chronically runs high, it can predispose to this. 02:00 The other thing is cerebral amyloid angiopathy and what this does is there's amyloid deposits in the blood vessels in the brain, and that causes them to be friable and rupture easily. 02:12 Other factors or things that maybe associated are AVM or an arterial venous malformation where the arteries and the veins connect when they’re not supposed to. 02:23 Drug use, primarily sympathomimetics. 02:25 Drugs like cocaine or anything that kind of makes the sympathetic system, and then hemorrhagic transformation of an ischemic stroke. 02:35 So if you have an area where there's been decreased blood flow, sometimes in the area where they’re swelling, those blood vessels can have a tendency to bleed and cause what we call hemorrhagic transformation of an ischemic stroke and then lastly, tumor is the other thing that can cause bleeding into the brain tissue because the area around a brain tumor can potentially have edema and swelling as well and cause those blood vessels to have a tendency to break. 03:05 Where do a majority of hypertensive intracranial hemorrhages take place? So the most affected area is the putamen, followed by the thalamus, then the cerebellum, then the pons and then other cortical areas. 03:18 One of the other big reasons that there’s such a high morbidity and mortality associated with it, are that the most common areas of bleeding are very, very crucial to function. 03:29 Patients commonly will present with contralateral motor and sensory loss which is motor and sensory loss on the area opposite to the area affected. 03:38 Potentially, they may have pain in their limbs and difficulty with their speech. 03:42 They maybe uncoordinated movements of the trunk and the limbs. 03:47 They might have numbness, weakness, ataxia which is, you know, an unsteady gait or potentially dizziness. 03:54 And they may also have some difficulty with their language. 03:58 Patients who have intracerebral hemorrhage can present in a wide variety of ways. 04:04 A common thing is the sudden onset headache. 04:08 There may also be vomiting, severely elevated blood pressures, and the neurologic symptoms progress over minutes and are contralateral to the area of lesion. 04:20 So they occur on the opposite side of a lesion. 04:22 The other key thing here is that these patients may have altered level of consciousness. 04:26 So they may not be responsive, they may be in a comatose state or unconscious, and in those patients, you definitely wanna make sure you have a high level of suspicion that they have an intracerebral hemorrhage and get an urgent CT scan.

The lecture Spontaneous Intracerebral Hemorrhage (ICH – Emergency Medicine) by Sharon Bord, MD is from the course Neurologic and Psychiatric Emergencies.

Which of the following is NOT true regrading intracerebral hemorrhage?

Which of the following is NOT related to intracranial hemorrhage?

What is the most common site affected for hypertensive intracranial hemorrhage?

Which of the following is NOT seen in intracranial hemorrhage?