Vascular Resistance, Flow, and Mean Arterial Pressure
Blood flows through the heart, arteries, capillaries, and veins in a closed, continuous circuit. Flow is the movement of volume per unit of time. Flow is affected by the pressure gradient and the resistance fluid encounters between 2 points. Vascular resistance is the opposition to flow, which is caused primarily by blood friction against vessel walls. Vascular resistance is directly related to the diameter of the vessel (smaller vessels have higher resistance). Mean arterial pressure (MAP) is the average systemic arterial pressure and is directly related to cardiac output (CO) and systemic vascular resistance (SVR). The SVR and MAP are affected by the vascular anatomy as well as a number of local and neurohumoral factors.
read more 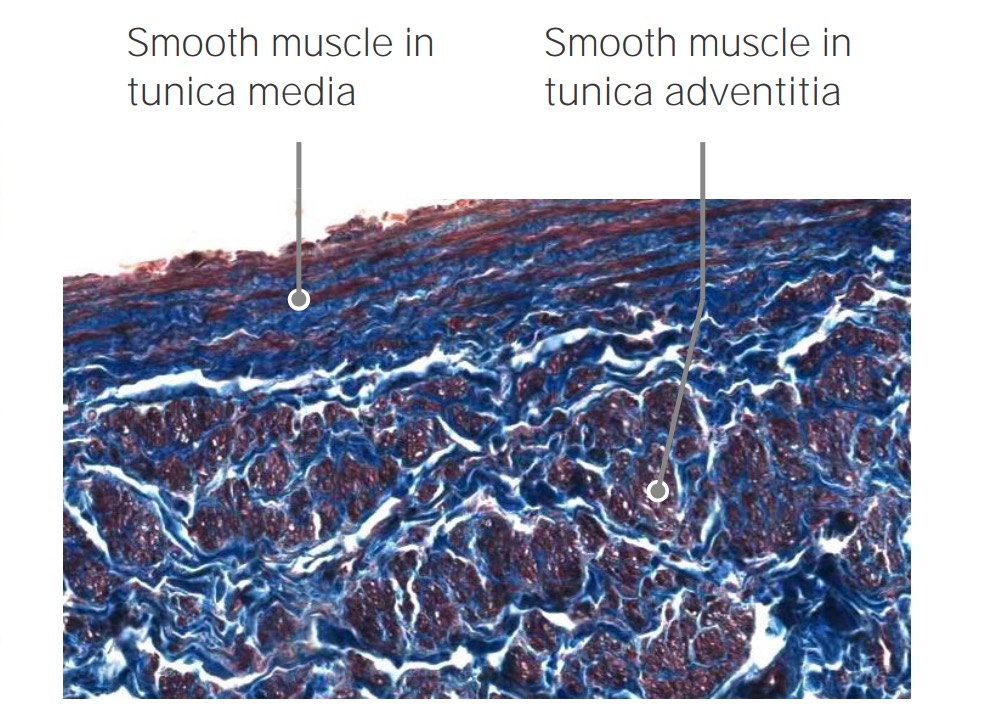 Veins
Veins are tubular collections of cells, which transport deoxygenated blood and waste from the capillary beds back to the heart. Veins are classified into 3 types: small veins/venules, medium veins, and large veins. Each type contains 3 primary layers: tunica intima, tunica media, and tunica adventitia. The venous circulation is a low-pressure system with much lower amounts of smooth muscle and elastic tissue, thinner walls, and larger lumens than arteries. Veins are capacitance vessels with significant compliance and the ability to distend and hold up to 70%–80% of blood volume at rest.
read more 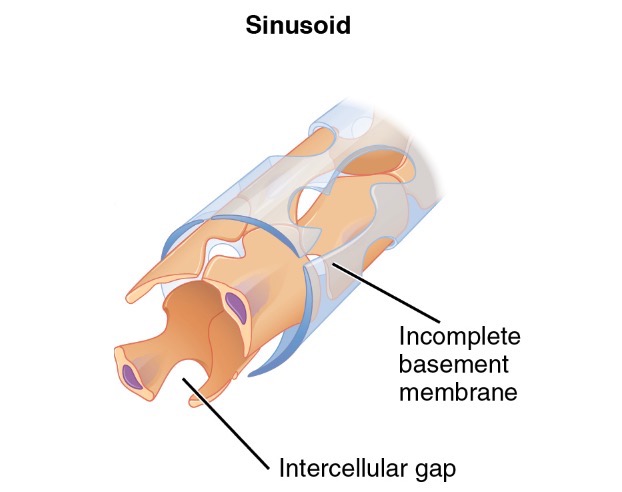 Capillaries
Capillaries are the primary structures in the circulatory system that allow the exchange of gas, nutrients, and other materials between the blood and the extracellular fluid (ECF). Capillaries are the smallest of the blood vessels. Because a capillary diameter is so small, only 1 RBC may pass through at a time. Capillaries are organized into capillary beds, which are extensive networks of branches and anastomoses. Blood flows from the metarterioles, into the capillaries, out the thoroughfare channel, and into venules. Continuous, fenestrated, and sinusoid (discontinuous) capillaries are the 3 primary types, and each has a slightly different structure. Capillary dysfunction can occur either as a result of or a contribution to the clinical manifestation of many clinical conditions.
read more

Arteries
Arteries are tubular collections of cells that transport oxygenated blood and nutrients from the heart to the tissues of the body. The blood passes through the arteries in order of decreasing luminal diameter, starting in the largest artery (the aorta) and ending in the small arterioles. Arteries are classified into 3 types: large elastic arteries, medium muscular arteries, and small arteries and arterioles. Each of these types of arteries contain 3 primary layers: the tunica intima, tunica media, and tunica adventitia. In particular, the tunica media contains smooth muscle cells (allowing for vasoconstriction), and in the larger vessels, a significant amount of elastin (allowing these vessels to stretch and recoil in response to changes in pressure during systole and diastole).
read more
Load more
Share
Ask Questions
Take Notes
Download Slides
Report Mistake
Comments
show all Show less
My Notes
show all Show less
Learning Material 2
show all Show less
Report mistake
Transcript
0 of 0

The lecture Resistance and Capacitance Vessels by Richard Mitchell, MD is from the course Structure-Function Relationships in the Cardiovascular System.

Why is it necessary for the arterial system to be responsive to neural and hormonal stimuli?

Which components of the vascular tree regulate gas exchange?

Which of the following is the most likely physical exam finding of a 5-year-old boy who presents with a sore throat?

Where in the vascular tree would one see the greatest increase in smooth muscle contraction during increases in blood pressure?

The structure and function of which of the following are correctly paired?