Histology of the Lung – Lung Anatomy

Bronchial Tree
The collective term “bronchial tree” refers to the bronchi and all of their subsequent branches. The bronchi are the airways of the lower respiratory tract. At the level of the 3rd or 4th thoracic vertebra, the trachea bifurcates into the left and right main bronchi. The right main bronchus is shorter and more vertical in direction than the left. Both of these bronchi continue to divide into secondary or lobar bronchi that bifurcate further and further in order to sufficiently spread the respiratory air completely into the left and right pulmonary lobes. The terminal segment of each bronchus contains millions of alveoli, the site of gas exchange.
read more 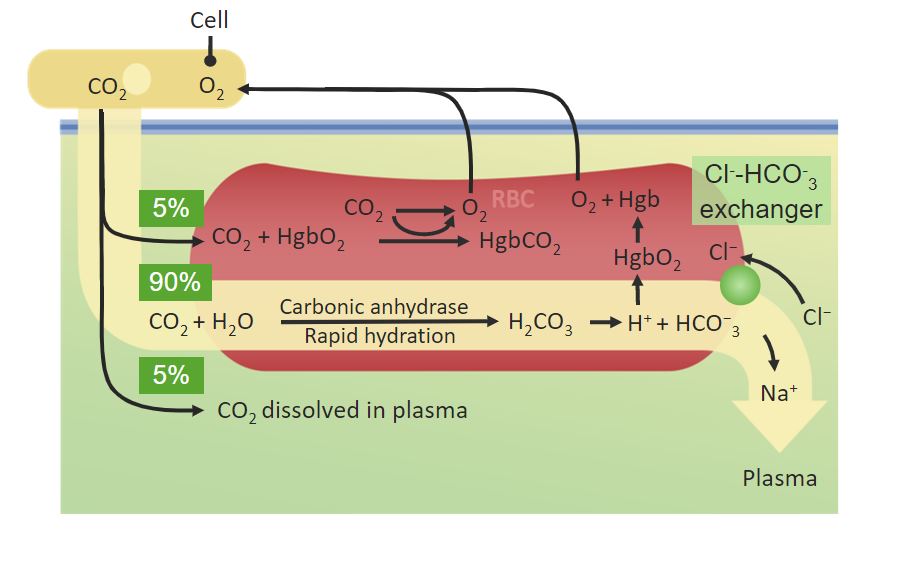 Gas Exchange
Since human cells are primarily reliant on aerobic metabolism, it is of vital importance to efficiently obtain oxygen from the environment and bring it to the tissues while excreting the byproduct of cellular respiration (CO2). Respiration involves both the respiratory and circulatory systems. There are 4 processes that supply the body with O2 and dispose of CO2. The respiratory system is involved in pulmonary ventilation and external respiration, while the circulatory system is responsible for transport and internal respiration. Pulmonary ventilation (breathing) represents movement of air into and out of the lungs. External respiration, or gas exchange, is represented by the O2 and CO2 exchange between the lungs and the blood.
read more

Trachea
The trachea is a tubular structure that forms part of the lower respiratory tract. The trachea is continuous superiorly with the larynx and inferiorly becomes the bronchial tree within the lungs. The trachea consists of a support frame of 16–20 semicircular, or C-shaped, rings made out of hyaline cartilage and reinforced by collagenous connective tissue. The posterior wall of the trachea is free of cartilage. In this area, the paries membranaceus forms a plate out of smooth tracheal muscle and connective tissue and forms the border to the dorsally running esophagus.
read more

Lungs
Lungs are the main organs of the respiratory system. Lungs are paired viscera located in the thoracic cavity and are composed of spongy tissue. The primary function of the lungs is to oxygenate blood and eliminate CO2. To perform this function, the lungs need to be able to capture as much O2 as possible, a task that is easily achieved owing to their elastic morphology. Each lung is enclosed within the visceral pleura and completely fills 1 of the non-symmetrical pleural cavities, which are situated on the left and right sides of the mediastinum. The lungs encase the bronchial tree and are divided functionally and anatomically into lobes.
read more
Load more
Share
Ask Questions
Take Notes
Download Slides
Report Mistake
Comments
show all Show less
My Notes
show all Show less
Learning Material 2
show all Show less
Report mistake
Transcript
0 of 0

00:01 So what's the histology of the lung? If you get a microscope and look at the epithelium of the conducting airways, what does it look like? Well, largely, the conducting airways will have columnar epithelium, so that's a single layer of cells based on a basement membrane. There are oblong in shape. The nucleus tends to be at the base on the basement membrane, and then there'll be cilia projecting out the surface of the epithelial cell. And the cilia are protein structures which allow mucus to move back up the airways and out of the lungs, and that is a primary immune mechanism for defending the lung against anything that is inhaled that should not be there. 00:44 Underneath this layer of squamous epithelium, there will be various submucosal structures: a little bit of muscle around the main bronchi, some fibrocartilaginous layers, connective tissue, etc. Interspersed in the mucosal layer, there will be the occasional goblet cell, which produces mucus, and there are also submucosal glands which produce mucus, which are shown here in the middle part of this diagram, with an opening coming out into the epithelium from which mucus is secreted by the cells in the submucosa. As the airway goes… as you go down the airway towards the bronchioles, the amount of submucosa thins out, and the height of the columnar epithelium becomes smaller, and eventually, you'll lose your cilia as well. If you were to look at the alveolar epithelium in more detail, it'd look like this. There would be, as we described just now, an alveolus containing air. There's a type 1 pneumocyte there, you can see, which is forming a very large surface area of the alveolus. There's the occasional type 2 pneumocyte, with its synthetic function, and then in between alveoli, you can see, there's a small capillary with red cells in the middle and a filial cell forming a very thin capillary wall. And this is important, this structure, because of the small gap between the alveolus and the red cell in the capillary allows diffusion of oxygen from the alveoli into the red cells much more rapidly than it would be if there was a larger gap. The interstitium, which is in the middle, really is very thin in the lung and should remain so for good gas exchange. 02:31 I've mentioned already the visceral pleurae. So the pleurae are two layers which are consist of flattened squamous cell mesothelial cells—a single layer, a monolayer, which covers the underside of the thoracic cavity, so the ribs and the muscles of the parietal cavity of the parietal pleurae and the surface of the lung, the visceral pleurae, with a small gap between the two. Now that gap has a little bit of fluid in it in normal people, but it's a potential gap that can be filled up with air or filled up with fluid during disease situations. The visceral and the parietal pleurae merge at the hila, where there's a hole in the visceral pleurae created by this merging with the parietal pleurae that allows entry of the blood vessels and the right and the left main bronchi into the lungs. The nerve supply to the pleurae is from the intercostal nerves that we described earlier as lying underneath each rib. The nerve supply to the pleurae, which overlies the diaphragm, is from the phrenic nerve. So there is a pleural space, but it contains, in normal people, a minimal amount of fluid, acts as a sort of oil so that when you breathe, things can move nice and smoothly. The fluid forms from the bronchial intercostal circulation, so you get fluid oozing out from the lungs from the bronchial circulation and from the intercostal circulation but then drains down the lymphatics. And in general, that fluid formation and drainage is in balance, so the pleural space does not expand. But when you get disease that increases the amount of fluid coming out from the bronchial intercostal circulation (such as heart failure) or impairs the lymphatic drainage (if you've got abnormal pleurae, for example), then you may end up with pleural fluid forming in the pleural space and accumulating there to cause what we call a pleural effusion. 04:27 I've mentioned the hila already. This is a diagram showing them. So the gray part of the lung is covered in visceral pleura, and the gap where the visceral and the parietal pleurae fuse is right there in the middle of the medial aspect of each lung. And you can see the variety of blood vessels and airways that enter the lung and nerves at that point on either side.

The lecture Histology of the Lung – Lung Anatomy by Jeremy Brown, PhD is from the course Introduction to the Respiratory System.

Which of the following statements about the bronchial tree is CORRECT?

What is the function of the goblet cells?

While progressing downward along the bronchial tree, what changes occur in the structure of epithelial cells?

Author of lecture Histology of the Lung – Lung Anatomy